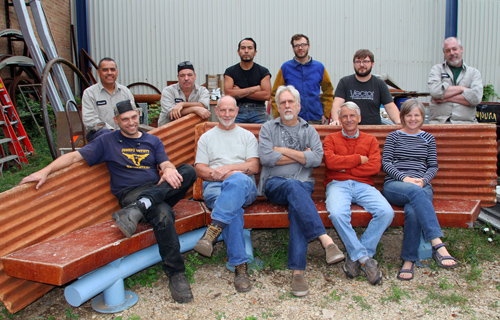 Fabricating sculptures, especially large-scale sculptures, is a long arduous task. It involves many phases including: sketches – maquette – structural engineering – fabrication – assembly – installation. Then there is maintenance – cleaning and sometimes restoring! Some of these stages require high level of technical and engineering expertise, and sometimes an artist need much larger workspace than what their own studio provide. So at times, artists need support or helping hands, to breathe life to their concept. Vector Custom Fabricating does exactly that! By providing large workshop space, filled with various types of machines and equipment, and a dedicated team of experts, all of whom are artists in their own right, Vector is a one-stop shop of any or all services a sculptor may need to bring their artistic vision to fruition!

Many nationally and internationally recognized artists have collaborated with Vector Fabricating at various stages of sculpture making including Terrence Karpowicz, Neil Goodman, Nicole Beck, Barbara Cooper, Christine Rojek, Iñigo Manglano-Ovalle, Ed McCullough, John Himmelfarb, Bruce White, Stephen Luecking and many others. These artists have made incredible range of sculptures working with different mediums. Sometimes Vector assists in making of a small yet critical aspect sculpture: the “suspension system” for Ecotone [2013] by Barbara Cooper, or “steel frames” for Breeze Keeper [2012] by Christine Rojek, and sometimes they assist at multiple stages: like structural engineering and fabrication of Amplifiers [2014] by Nicole Beck, Lotus [2013] by Terrence Karpowicz, and Meridian X [2012] by Ed McCullough. But its important to emphasize that the vision, and the concept is always of the artists. Vector provides the vital support structure, to help translate the artist vision to reality! 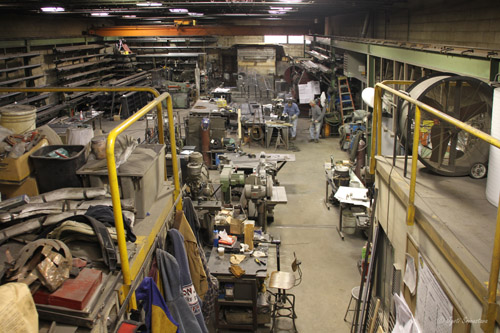 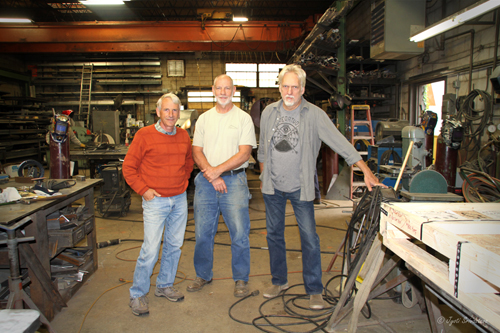 Vector Custom Fabricating was established in 1978 by three artist-entrepreneurs, Barry Hehemann, Steve Mueller and Mike Wilkie. All three received their BFA degrees in Sculpture while studying with Professor Gary Freeman at the John Herron School of Art and Design; and then went on to earn their Master Degrees in Sculpture from the University of Illinois, Urbana-Champaign. Steve Mueller explains, “Starting a company that specializes in fabricating highly crafted metals was the best way to follow our passion of making sculptures and also to market our skills commercially”. He further explains, “One of our models was the Lippincott Company, a well-known fabricator of large scale sculptures”. In fact the ideology behind Lippincott best explains the driving force behind Vector Fabricating.

In an article in Paris Review [in Dec, 2010], Jonathan Lippincott, son of founder Donald Lippincott explains, “Before Lippincott, Inc. was founded in 1966, artists had no natural industrial partner and no capacity to produce sculpture on an industrial scale. They had to fabricate their own pieces, working alone or perhaps with assistants or students, or turn to manufacturers with no experience producing artworks. Sculpture was typically modest in scale, designed for intimate viewing, and often still produced in the artisanal manner—by the incremental labor of single artists. After Lippincott, Inc. was founded by my father, Donald Lippincott, and his business partner, Roxanne Everett, sculpture changed. It got bigger, it moved outdoors, it asserted itself as a modern form of public monument. The Lippincott shop introduced industrial production to sculpture and vice versa, and it helped create a new kind of work in which scale was not just a formal matter but a crucial part of the sculptural endeavor.” Vector Fabricating modeled after Lippincott Inc. [North Haven, Connecticut] has played a similar role in Chicago.

Vector Fabricating is perhaps the only facility in Chicago that provides a complete range of assistance from conception to completion. Since its inception, the founders realized the importance of having a team of skilled sculptors, who keep themselves abreast with the latest in the sculpture scene in Chicago and beyond. This provides an artist-friendly environment, where clients, who becomes friends of Vector, feel assured that their artistic vision is being understood and followed through. Each artist have their own unique style and the Vector team makes sure to meet their specific needs to maintain their distinguishing features and exclusiveness. Usually an artist approach them with an idea, a rough sketch or a small scale model; and from there Vector can provide them with developing 3-D models, structural engineering, fabrication, assembly, installation and even maintenance. Several public art installations in Chicago and beyond have been with the support of Vector Fabricating in one or multiple stages. 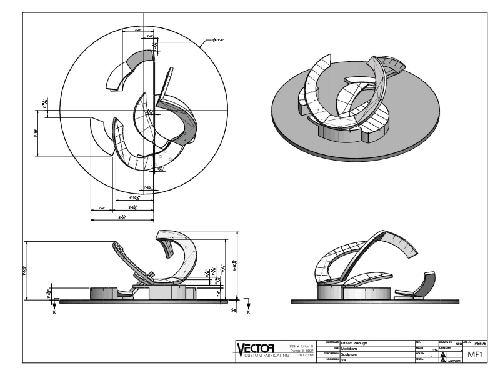 Meridian X [2012] – by Ed McCullough. The sculptor collaborated with Vector in development of 3-D model, sculptural engineering, fabrication and installation of the sculpture. The sculpture is installed at the Hines VA Hospital. For more images of this sculpture, click here.. 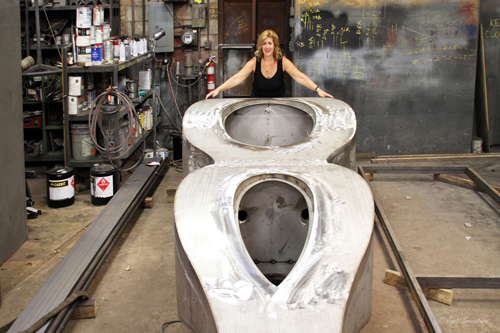 Amplifiers [2014] – by Nicole Beck. The sculptor collaborated with Vector in fabrication of the this large sculpture [18′ x 12′ x 6′/ Stainless steel], now installed at the Electrical and Computer Engineering [ECE] building at the University of Illinois. It was commissioned by Capital Development Board of Illinois Art-In-Architecture program. For images of the completed sculpture, click here.. 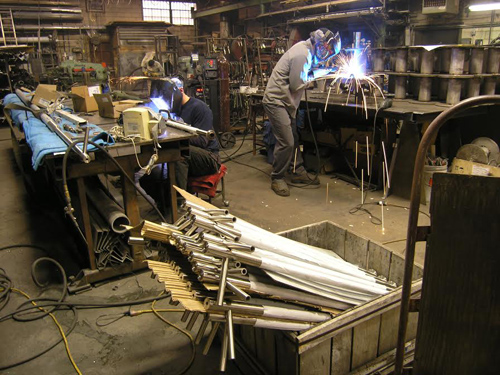 Weather Field No: I [2013]- by Iñigo Manglano-Ovalle. The sculptor collaborated with Vector in the fabrication of the sculpture. This site-specific sculpture comprises of 49 telescoping stainless steel poles, and each pole supports a weather vane and anemometer. It is installed in Tongva Park, Santa Monica, California. For more images, click here.. 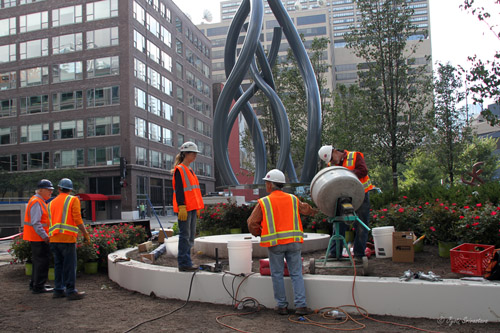 Lotus [2013] – by Terrence Karpowicz. The sculptor collaborated with Vector in the structural engineering, fabrication and installation of the sculpture. The sculpture was commissioned by the Habitat Company in conjunction with Hubbard Place Development, and is installed at 360 W. Hubbard Street. For more images, click here.. 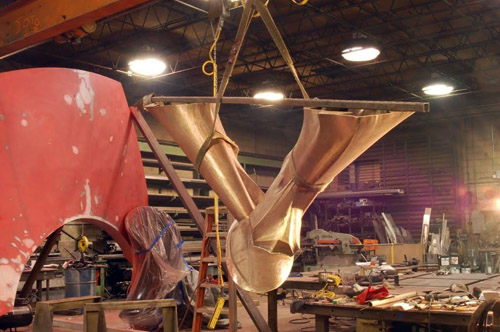 Landslide [2009] – by Derick Malkemus. The sculptor is a part of Vector team. It was commissioned by CTA Art-in-Transit program and is installed at the Fullerton station [Brown Line]. For more images, click here.. 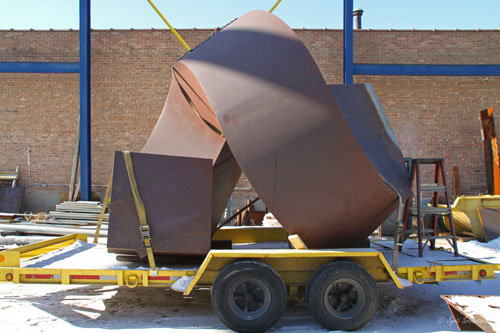 Restoration of Spiral [1971] by Clement Meadmore, at Vector Fabrication in 2010

Restoration of Spiral [1971] by Clement Meadmore, at Vector Fabrication in 2010. In the words of Steve Mueller, “The restoration of Clement Meadmore’s sculpture “Spiral” was especially gratifying for several reasons. The artists that work at Vector and performed the restoration admire and respect the sculpture of Clement Meadmore. And Lippincott Inc., the company that originally fabricated the sculpture in 1971, was a model for the founders of Vector Custom Fabricating, Inc.. It was also interesting to work with a Corten fabrication and discover how it had weathered over 40 years outdoors.” Spiral is installed at the Nathan Manilow Sculpture Park at Governors State University.. For more, click here..

Many more images can be seen in the Vector website Photo Gallery.. click here..
Some other interesting trivia:

– Steve Mueller, one of the co-founders was received the Distinguished Alumni Award from Herron School of Art & Design, Indianapolis, in the year 2014.

– Steve and his wife Debbie Mueller [who also works at Vector Fabricating] maintain a sculpture Park: The High Lake Sculpture Garden. The collection focuses on outdoor sculpture by contemporary Chicago and Mid-West sculptors. Visitors by appointment are welcome.

– Barry Hehemann, also a co-founder of Vector Fabricating has made a series of sculptural benches. click here..Three of these are part of the King Drive Gateway Project.

– Vector’s annual event “Pig Roast and Fire Carnival”, attracts some of the best sculptors of Chicago.

– The entire staff at Vector Fabricating consists of artists. Many of them have produced large scale sculptures installed at different venues. Notable are Landslide [2009] by Derick Malkemus, Hulettelujah [2011] by Barry Hehemann, and The Wings of Progress [2012] by Adrian Calderon.

Finally, I got to say that I have been working very closely with Vector Fabricating, since 2012. In fact I have helped in making their website, Vector: The Art of Fabricating.. click here.. How it all began is also an interesting story in the sense that I approached them, with the idea that I wanted to learn about the fabrication of sculptures. The best place would be Vector Fabricating! They agreed.. and I am forever Thankful for providing me the opportunity of working with them!! 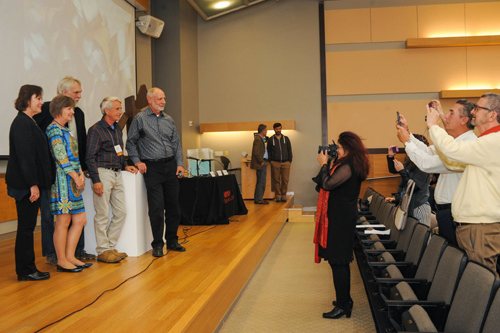