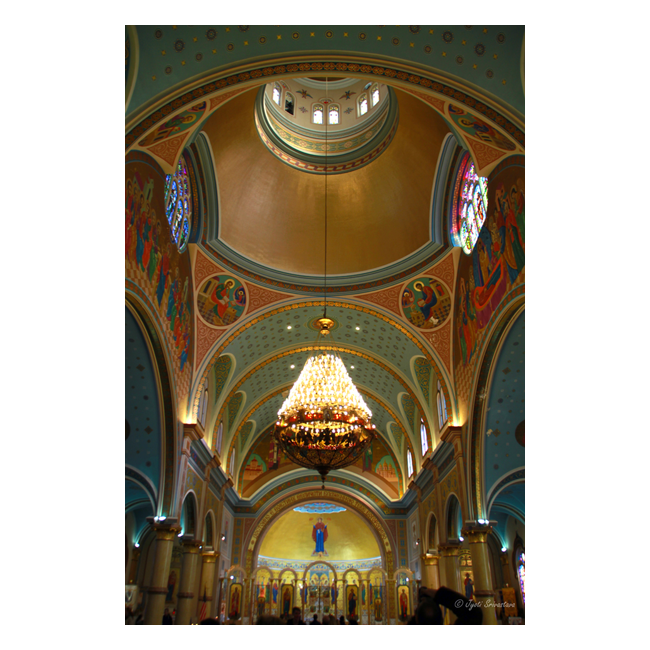 Ukrainian Catholics are Eastern Rite Christians who follow the Byzantine-Slavonic traditions, have their own Patriarch and are in communion with Rome. The idea of St. Nicholas Parish was first conceived in 1905 by a small group of Ukrainian laborers. By 1906 they had raised enough funds to acquire their first church, which was located at Bishop and Superior streets, from a Danish Protestant congregation. As the community grew, the laborers purchased the property at Oakley Blvd and Rice Street in 1913 and in 1915 completed construction on the church that sits there today. 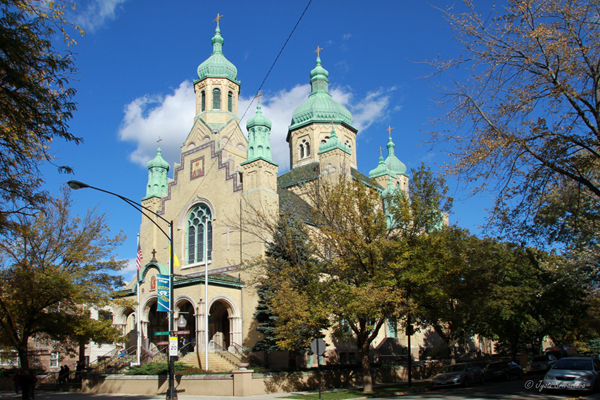 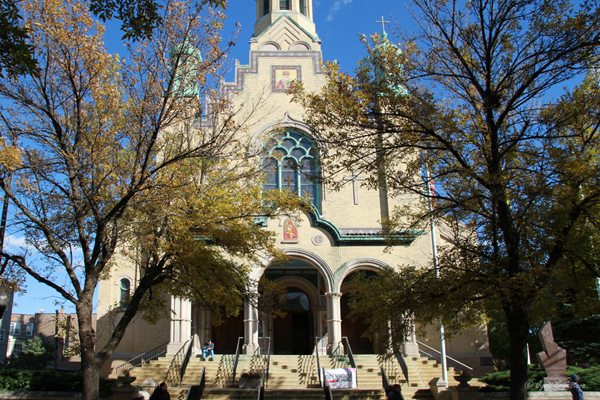 St. Nicholas Ukrainian Greek Catholic Cathedral sits in the midst of Chicago’s Ukrainian Village. This post is about the art and architecture of St. Nicholas Cathedral. The renowned architect I.G. Steinbach designed the structure. It was built by M. Ryan Contractors during the pastorate of Rev. Nicholas Strutynsky.

The steel superstructure of the edifice was a unique form of construction for the times. Massive stone supports were used together with the steel. The church stands 167 feet high from street level. It is 136 feet long and 85 feet wide. The structure can accommodate over a thousand worshippers. The massive and powerful structure is capped by 13 bronze domes topped with gold crosses representing Christ and His 12 Apostles. Above the entrance on Oakley is a mosaic of Our Lady of Pochaiv and above her is the icon of their patron, St. Nicholas the Wonder-Worker. 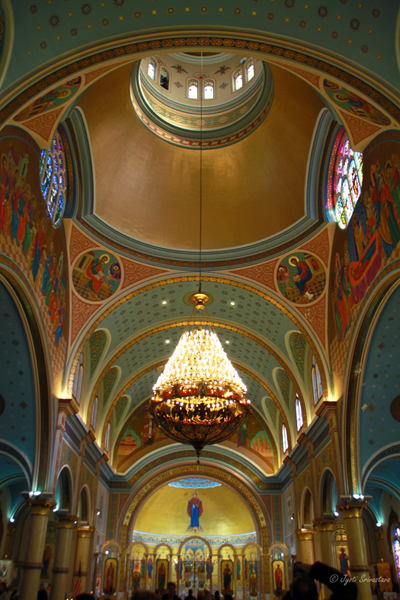 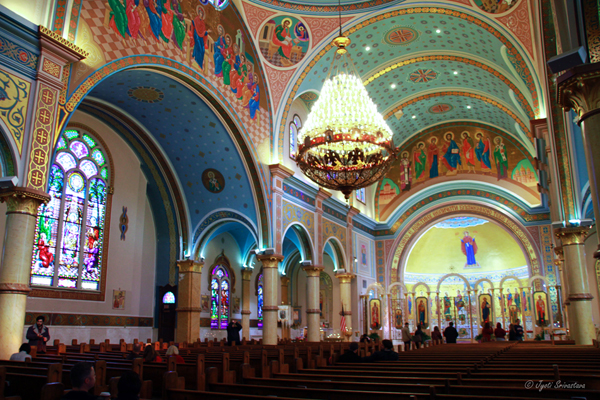 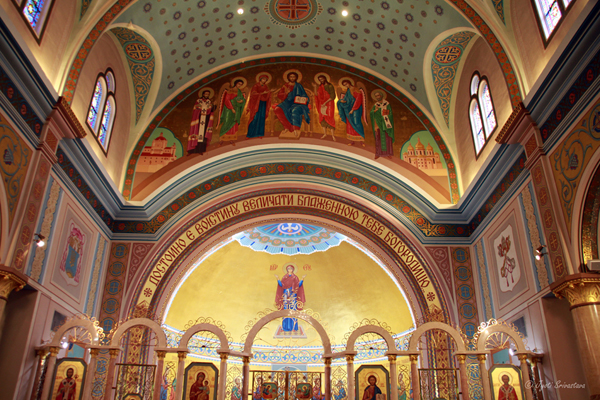 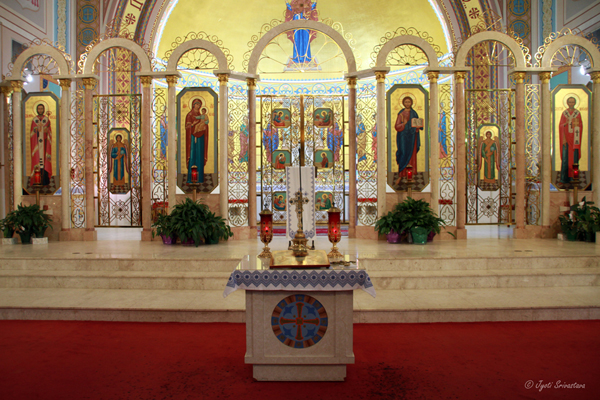 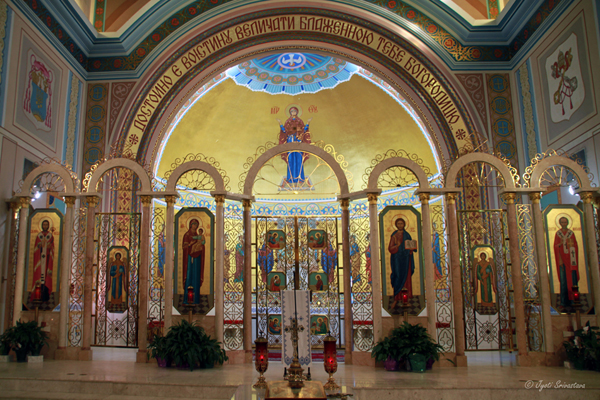 When one enters the church, they are arrested by a brilliant panoramas of heaven, set against sky blue and gold colors. Glorious icons and scenes depicting events in the life of Christ, his Mother, and many saints fill the windows, walls, ceiling and apse of the edifice.  The 12 columns remind of the 12 apostles.  There are 4 minor side columns reminding worshippers of four evangelists. The intricately designed gold leafed cornices support the cathedral roof. 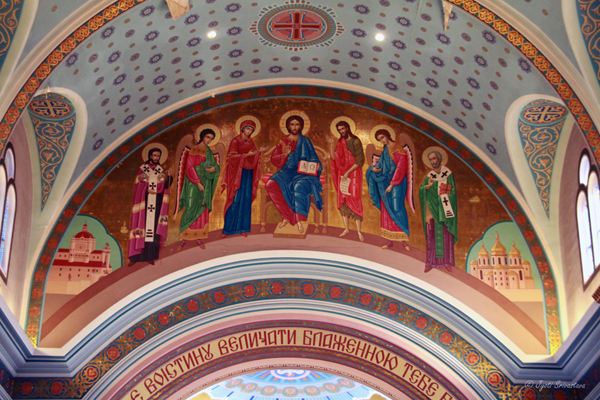 ICONOGRAPHY: The dominant icon representation at the very front and top of the interior wall above the alter is the Pantocreator together with Godbearer, John the Baptists and St. Josaphat [first Ukrainian Saint]. Symbolically at the far left and far right , are the domes of the Cathedral of St. Sofia in Keiv and St. George’s in L’viv are represented, to remind the faithful of their ethnic origin.

The central dome in the center of the cathedral is covered with gold and a wide array of six-winged angels. On the side of the walls, a powerful representation of Descent of Holy Sprit is depicted on the left, the Dormition on the right. Four area of the main dome portray the four Evangelists who symbolically support the entire central portion of the church. The spiritual pillars of the Eastern Church appear on either side of the ceiling: SS. Basil the Great, John Chrysostom, Gregory the Theologian, and Gregory Nazianzen. At the back of the cathedral above the choir loft, one can find icons of two great apostles of the Slavs, the saintly brothers Cyril and Methodious.

The iconography is the work of artists Boris Makarenko and Myron Bilinsky of Philadelphia, was tastefully done in Byzantine Ukrainian style using bright colors reminiscent of the iconography of Kyiv’s St. Sophia, the mother church of all Ukrainian Churches. 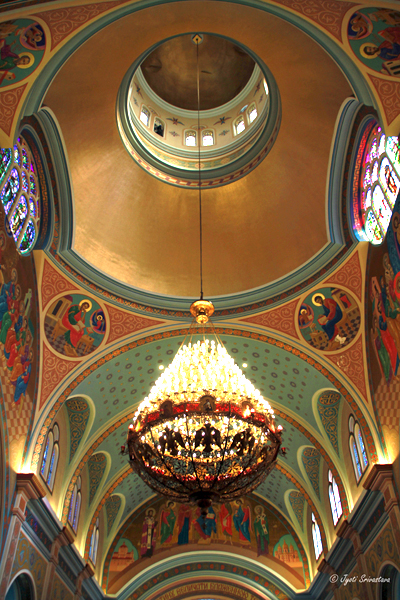 CHANDELIER: Hanging from the highest dome in the center of the cathedral is a brilliant nine-tiered golden chandelier lit with 480 lights. The chandelier was made in Greece, with the 12 apostles of the New Testament encircling the exterior. This chandelier is acknowledged as the largest of its kind in the United States. 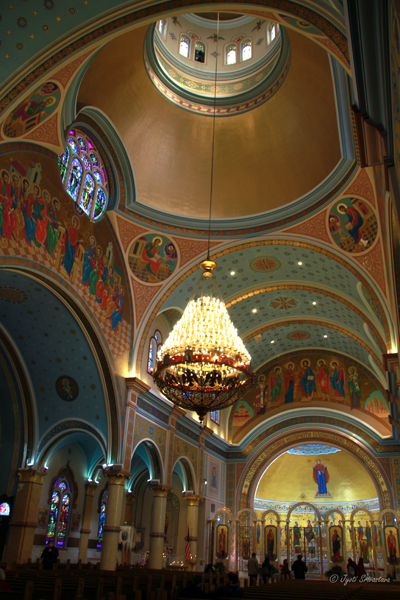 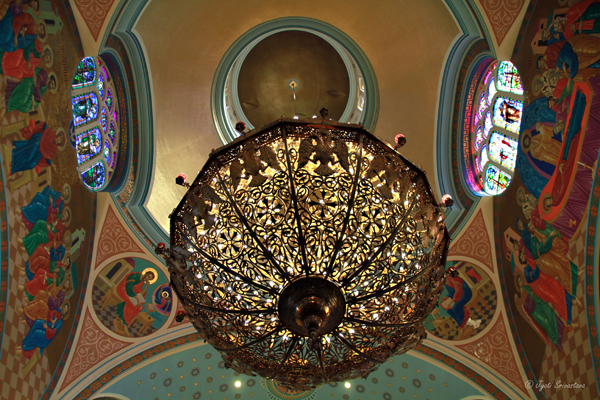 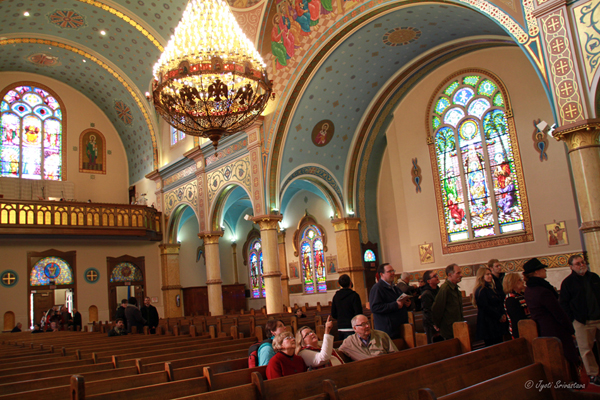 Stained Glass Windows: All window areas are filled with stained glass Old and New Testament themes depicted in traditional Byzantine Ukrainian style by the Munich Studios of Chicago. The north and south walls prominently display scenes of Nativity and Transfiguration of the Lord. The windows in the back of the church depicts the Last Judgement with chirs of cherubim – righteous souls and those damned to hell. 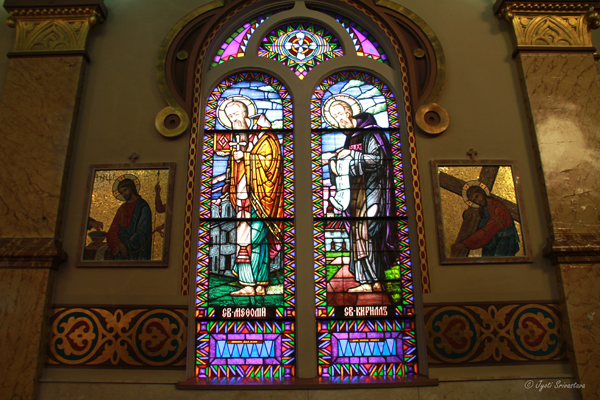 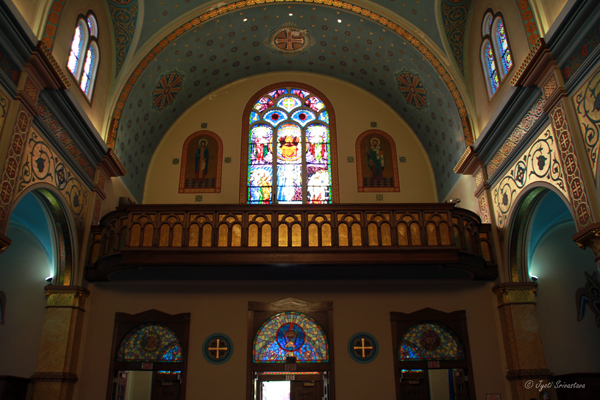 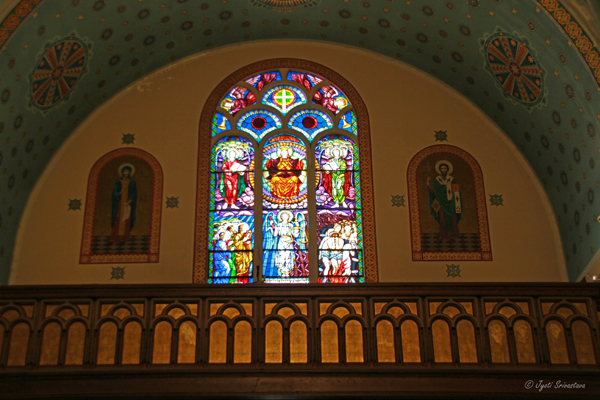