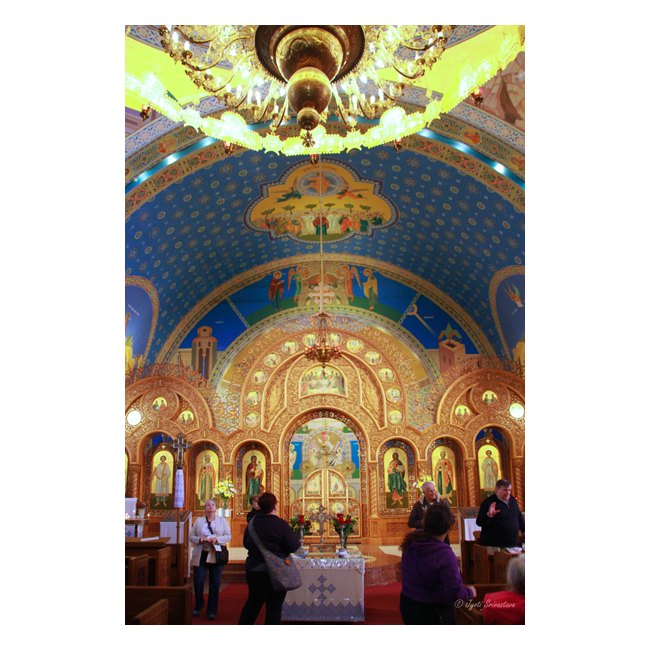 Artists: The icons are work by Ivan Dykyj. The wooden frames of the iconostas was hand-carved from oak by Paul Mozes of New York. The stained glass windows are the work of Yaroslaw Baranskym of Yonkers, New York.

Sts. Volodymyr and Olha Ukrainian Catholic Parish in Chicago was founded in 1968 by Patriarch Josyf Slipyj and the bishop of the Eparchy of Chicago, Yaroslav Gabro. The parish was established  to preserve and faithfully adhere to the traditions of the Ukrainian Church.  From the very beginning, St. Volodymyr and Olha Parish has been a bastion of the Ukrainian community in the United States. The church is one of the landmarks of Chicago’s Ukrainian Village, an historic district in northwest central Chicago. 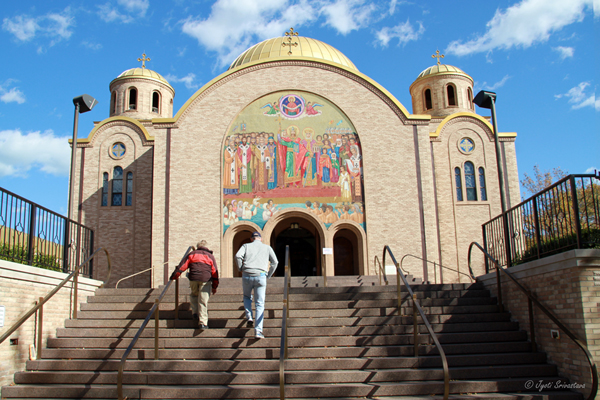 The golden domes of Sts. Volodymyr and Olha Church can be seen from far off. This building with its five golden domes was modeled after the Great Church of Hagia Sophia in Constantinople (Istanbul). The architect employed the Byzantine Ukrainian style of 11-13th century Ukraine. During this period, Ukraine was under the cultural and religious influence of Byzantium. Churches of this style are traditionally cruciform, with the altar facing the East. The rounded gold dome, along with a strong preference for circular patterns avoiding almost all angular designs is also typical of this style. 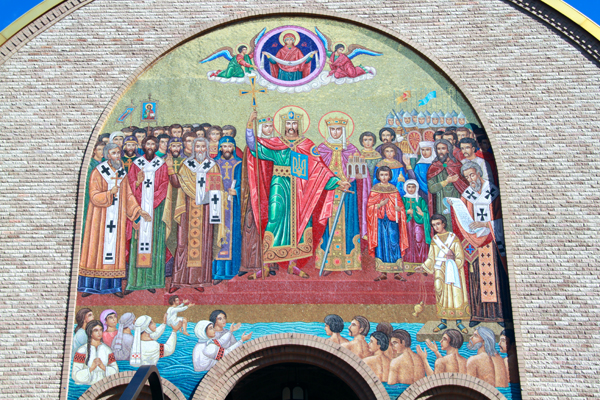 The beautiful mosaic above the main entrance to the church depicts the Baptism of the Ukrainians in 988 by St. Volodymyr and his Mother, St. Olha.

Nothing about the architecture of an Orthodox house of worship is accidental. Everything is intended to remind us that God is ever present in our lives, and that our ultimate destination is the Kingdom of Heaven.
In general, the Orthodox church can be thought of as consisting of three parts:
Narthex, Nave and Sactuary.

NARTHEX/ VESTIBULE: After passing through the front doors one enters the vestibule or narthex. While in the narthex, the visitor [worshipper] is symbolically still in this world. The Narthex is the entryway into the church. It is a place of transition, in which we shed our worldly concerns, and prepare to participate in the worship services.

NAVE: After leaving the narthex, the visitor enters God’s world or the nave where the congregation worships during church’s services. The Nave is the largest section of the house of worship. It is filled with pews where the laity gather for worship services. The term ‘Nave’ is believed to have derived from the Latin word ‘navis’, for ship.

SACTUARY: The front part of the church is the sanctuary, which contains the alter. It is from here that church services are conducted. The Sanctuary is the third section in the Orthodox house of worship. As the Narthex was historically the place of the penitent and the catechumens, and the Nave was and is the place of the faithful, the Sanctuary was and remains the place of the clergy.

In its architecture, the entire building represents the theology of our Church. The Sanctuary represents The Church Triumphant (Heaven). The Nave represents The Church Militant (Earth). Heaven is linked to Earth by the Iconostasis, which is the successor to the curtain that delineated the Holy of Holies from the rest of the Temple, as described in the Old Testament. 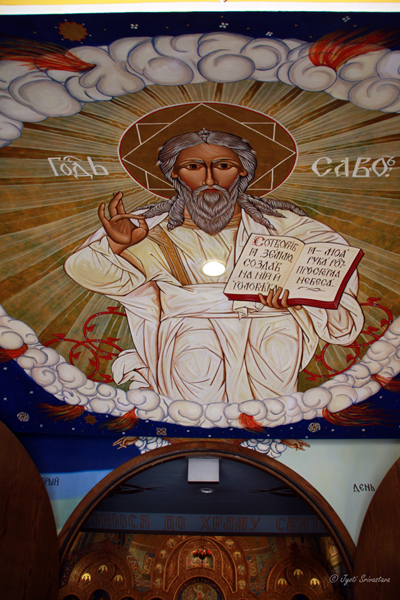 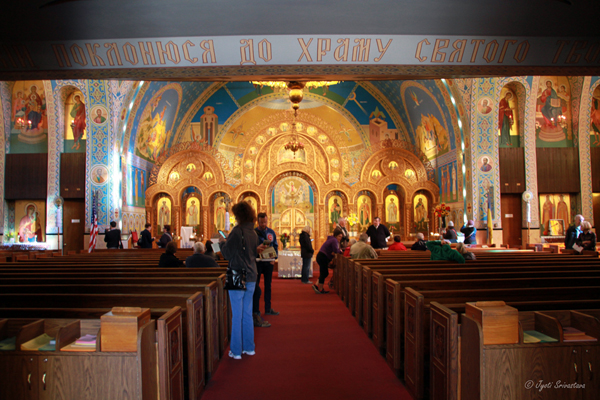 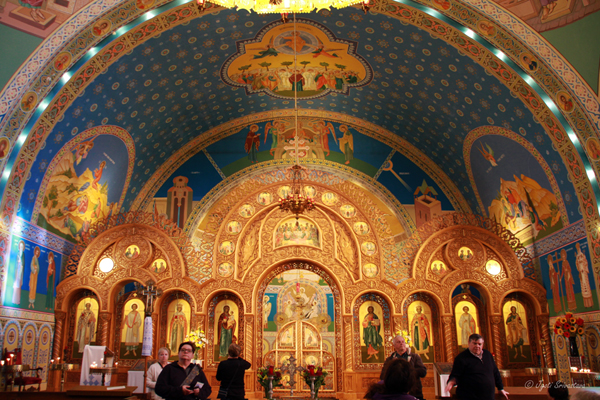 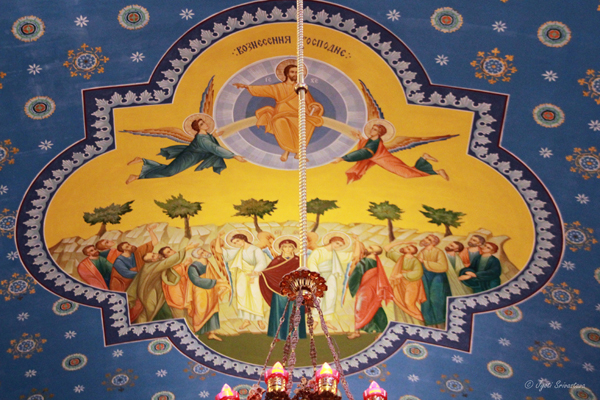 On the front wall of the cathedral above the alter is a painting that shows patron saint Prince Volodymyr presiding over the baptism of Ukraine in 988. 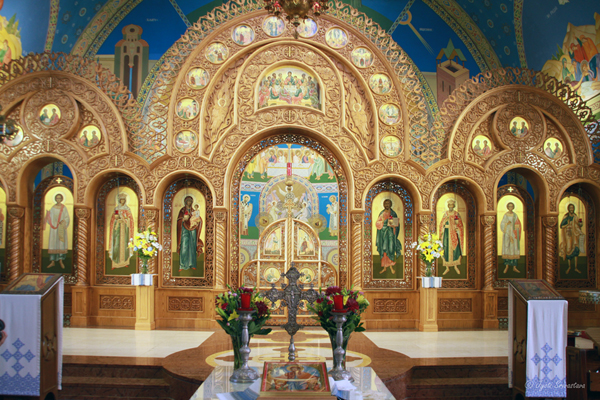 ICONOSTASIS: is a icon-screen or wall between the nave and the sanctuary, which is covered with icons and religious paintings, separating the nave from the sanctuary in a church. Iconostasis is the other distinctive element of the Eastern Rite churches. It reminds that the area around the altar is the Holy of Holies. It stands between the Nave and the Sanctuary and contains icons of the principal persons of our faith. But although the iconostas separates, it also unites, for the icons placed therein unites the worshipers with the God. The Iconostasis is the link between heaven (the Holy of Holies) and the nave (The Holy Place). Therefore everything is symbolic upon the Iconostasis.

The iconostasis normally has three doors, one in the middle and one on either side. The central one is traditionally called the Beautiful Gate and is only used by the clergy. There are times when this gate is closed during the service and a curtain is drawn. The doors on either side are called the Deacons’ Doors or Angel Doors as they often have depicted on them the Archangels Michael and Gabriel. These doors are used by deacons and servers to enter the sanctuary. Typically, to the right of the Beautiful Gate is the icon of Christ, then the icon of St John the Baptist; to the left the icon of the Theotokos, always shown holding Christ; and then the icon of the saint to whom the church is dedicated (i.e., the patron). There are often other icons on the iconostasis but these vary from church to church. Here again placement has its symbolism. The four evangelists [Matthew, Mark, Luke, and John] are depicted on the central doors [royal gates]. Also are the iconostas are St. Nicholas, St John the Baptist, as well as St. Volodymyr and Saint Olha. Over the gates we see the Last Supper. Thus it is through the Gospel and participation in the Eucharistic life of the Church that we enter the Kingdom of God.

SANCTUARY / ALTER: The area behind the iconostasis reached through the Beautiful Gates or Angel Doors is the sanctuary or altar. Within this area is the altar table, which is more often called the holy table or throne; the apse containing the high place at the center back with a throne for the bishop and the synthronos, or seats for the priests, on either side; the Chapel of Prothesis on the north side where the offerings are prepared in the Proskomedia before being brought to the altar table and the holy vessels are stored; and the Diaconicon on the south side where the vestments are stored.

Behind the Beautiful Gates, the alter faces east, towards the rising sun that is Jesus, whose resurrection is depicted in the domed background. It is from the altar that the priests and the people unite to praise the mighty Lord. 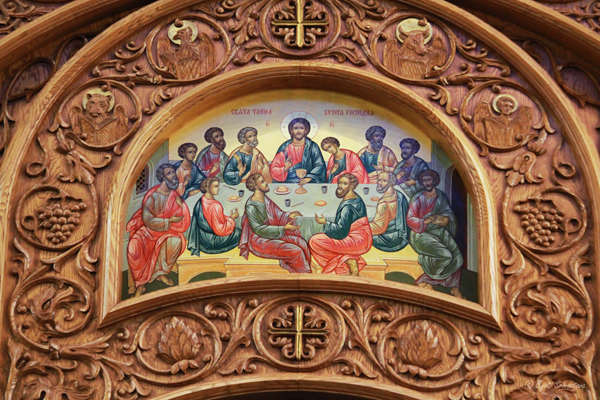 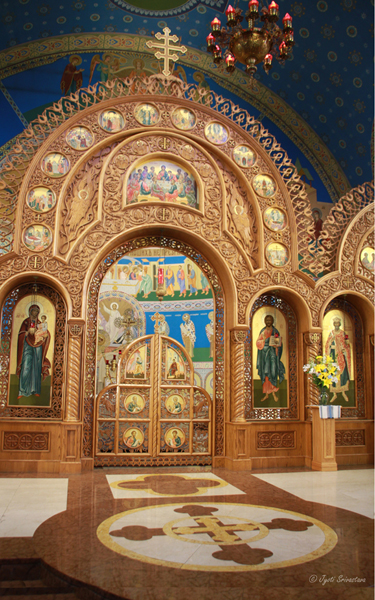 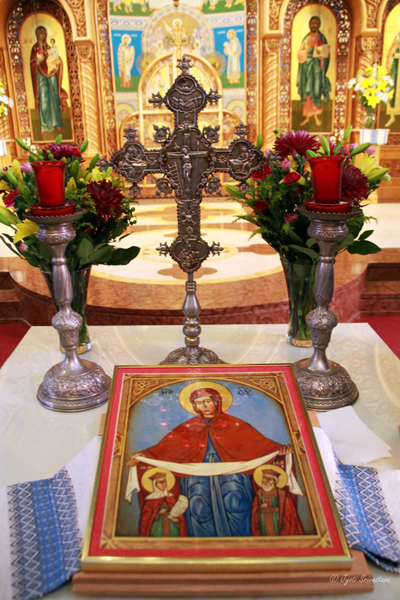 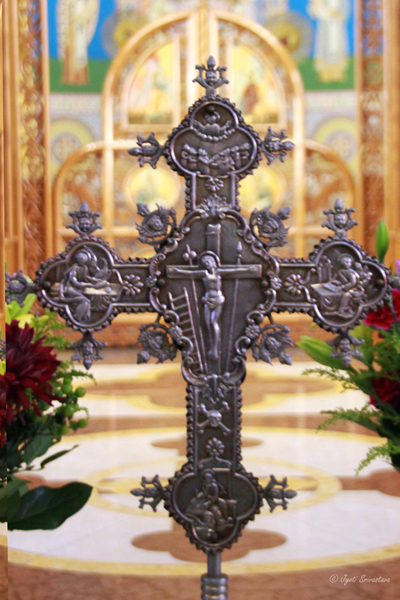 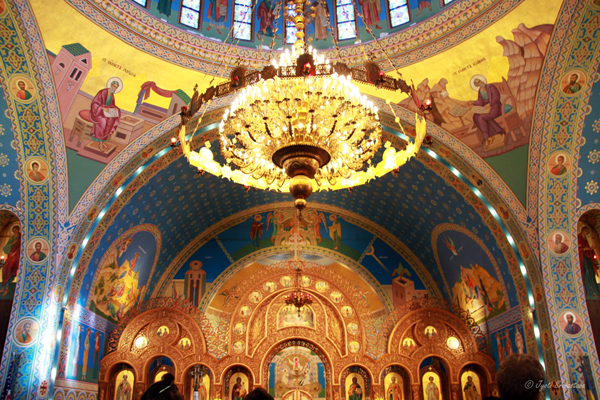 ICONOGRAPHY: Icon in Greek means image. Since icons are not painted for the sake of decoration or simple aesthetic pleasure, they are not ordinary paintings. Rather, they are images of the world transfigured by the power of God. Viewers often note the abstract nature of icons. This abstraction is usually an attempt to represent the otherness of the transfigured universe.

The angles drawn in the background of iconographic scenes illustrate how perspective and proportions are changed for the sake of spiritual emphasis. Frequently, elements of the background such as furniture, mountains, or the contours of secondary figures, are drawn in such a way as to point to the central character of the icon. Through this effect, the eyes of the worshipper are attracted to that which is spiritually most important in the icon.

The icons are not placed haphazardly throughout the church, rather, their placement follows a definite scheme. In the dome that represents heaven, we see Christ the Pantocrator [the Creator of all]. Descending we see the events of salvation history, until finally near ground level, we find ourselves in the company of our forbearers – the saints. This suggests that the church is a union of heaven and earth, as well as the past and the present. In the northern apse, there portrayal of crucifixion. In the southern apse, there are events leading to resurrection. The placement emphasizes that there are two aspects to a single reality. 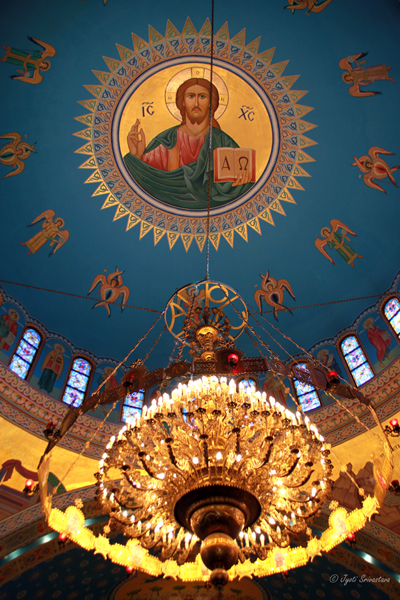 Christ the Pantocrator [the Creator of all]: Saints Volodymyr and Olha Ukrainian Catholic Church

Above the nave in the dome of the church is the icon of Christ the Pantocrator [“the Creator of all”]. Directly hanging below the dome (In more traditional churches) is usually a kind of circular chandelier with depictions of the saints and apostles, called the horos. 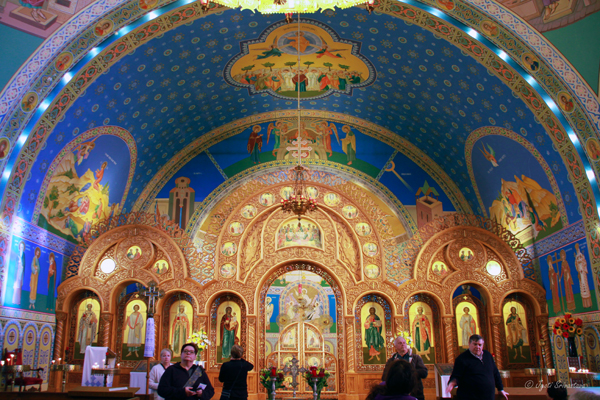 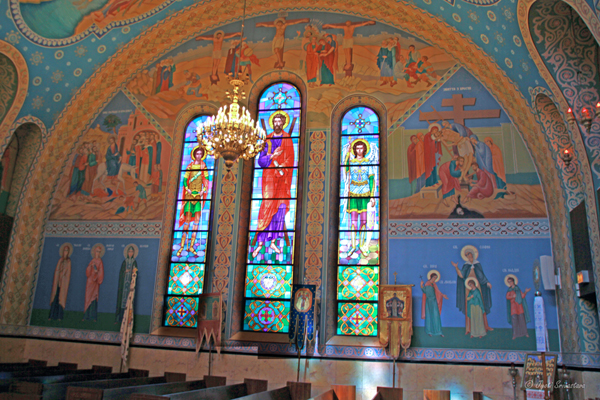 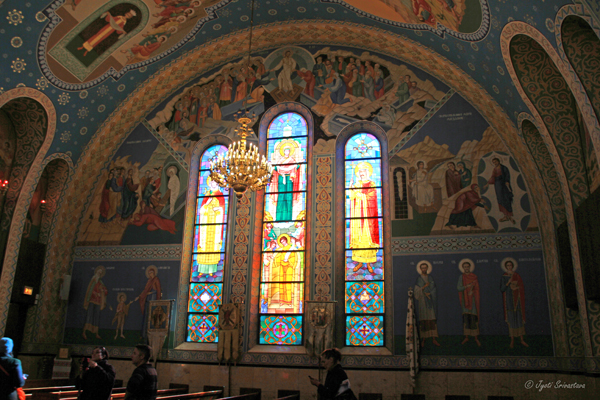 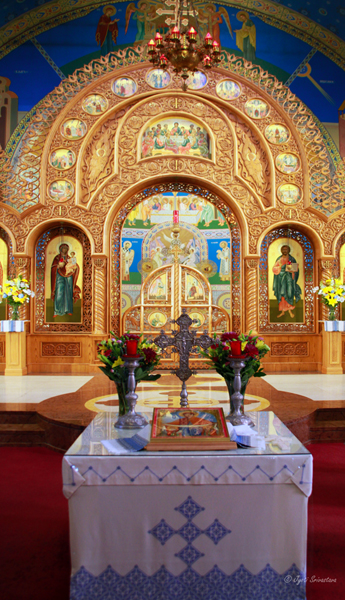 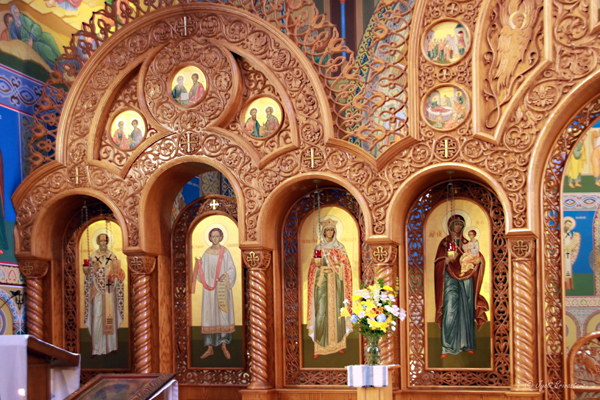 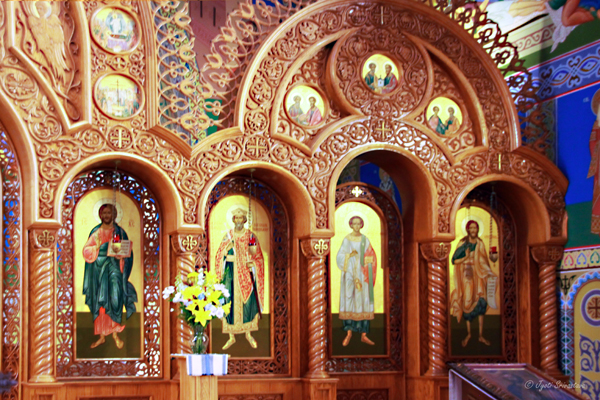