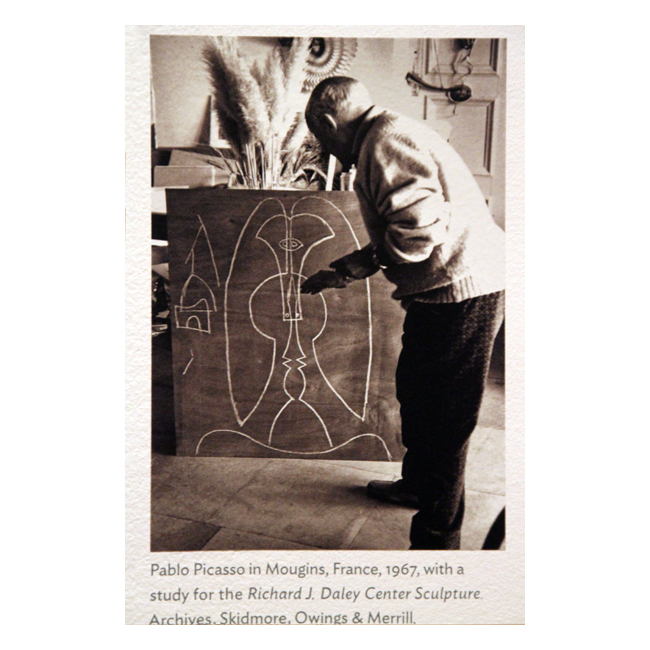 The Exhibition marks the centennial anniversary  of the Armory Show in 1913. at the Art Institute of Chicago [AIC] which became the first American museum to exhibit works of Pablo Picasso [1881-1973]

One of the highlights of the exhibition was  Picasso’s sketches for the monumental sculpture at the Daley Center Plaza.. 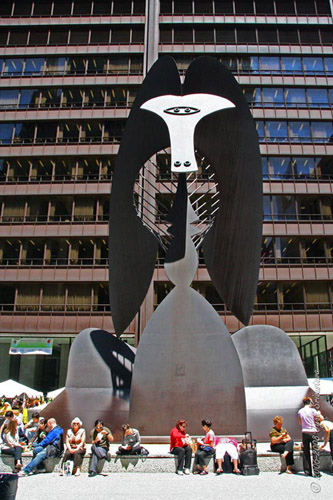 Untitled [known as The Picasso] – by Pablo Picasso

This untitled monumental sculpture at Daley Plaza, by Pablo Picasso [known as The Picasso],  is said to be the grandfather of Chicago Public Arts Program. In many ways this icon of Chicago advanced the acceptance of modern and contemporary art by a broad public. In unequivocally asserting the suitability of non-traditional artwork for the public realm, it led the way for decades of quality commissions for municipal facilities across Chicago and the nation, a recent highlight of this trend being the Millennium Park..

As any Public Art piece, there was a lot of ground work needed before the installation. Plans for this monumental sculpture can be tracked down to April 1963, when architects for the Chicago Civic Center [today the Richard J. Daley Center] – William Hartmann [of Skidmore, Owings & Merrill], Charles F. Murphy [of C.F. Murphy Associates], Richard Bennett [of Loebl, Schlossman & Bennett] – along with administrators of the Art Institute contacted British artist and poet Roland Penrose, who was also a close personal friend and biographer of Picasso. They described the idea of a monumental sculpture in the new city hall: “This is the location for the most important public sculpture in America…  we would like to determine if the man who we regard as the world’s greatest living artist, would be interested in exploring this problem. We are thinking of Pablo Picasso”.  They soon arranged a visit to Mougins armed with a model and an album of photographs of famous Chicagoans to introduce the artist to the project. Picasso noting a portrait of Ernest Hemigway exclaimed, ” My friend! I taught him everything he knew about bullfighting. was he from Chicago?” They also showed photographs of works of Picasso in Chicago collections as a reminder of his importance to the city.

In devising a sculpture for Chicago, Picasso drew upon ideas for a monumental head of a woman that he had been considering for at least a year or more. Over the years Picasso make numerous sketches, paper construction and finally a model maquette. Picasso worked on the project slowly irrespective of the progress of construction in Chicago. With deadline approaching, Hartmann sent Picasso various reminders of the city – a Chicago white Sox jacket and cap, a Chicago Bears jersey, a straw boater and a Sioux war bonnet – to stimulate his enthusiasm and curiosity. In 1965, the completed maquette arrived in Chicago [ a relieved Hartmann sent a telegraph to Penrose that the “Mougins dame has arrived. Champaign to all!] and was presented to Mayor Richard J. Daley and the public building commission in a gallery of the Art Institute. Once approved, work to prepare scale drawings and other decisions about the specifications necessary for the construction was carried by Skidmore, Owings & Merrill. The Gary Indiana plant of United States Steel Corporation’s American Bridge Company division fabricated the 50-foot tall, 160-ton work. 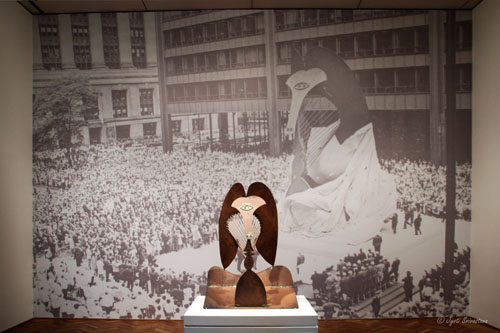 Maquette. In the background is photograph of unveiling of the sculpture

Before Picasso was contacted by the representative from Chicago for a monumental sculpture at the Civic Center.

Was Picasso working on the  idea of this monumental sculpture from before he was contacted by William Hartmann in April, 1963?  Interestingly in the exhibition “Picasso and Chicago”,  we see several of the drawings by Picasso, which seem to be working drawings for the monumental sculpture at Daley Plaza, which actually pre-date the time when Picasso was approached by representatives from Chicago. The drawings are from 1962! While this may not seem to interest many people, any Public Art aficionado might really enjoy them. 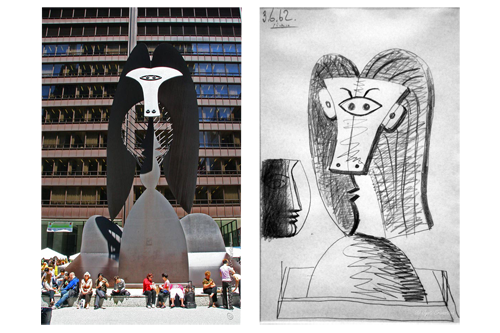 NOTE: The working drawings are from 1962,

that is, from before the representatives of Chicago approached the artist in 1963,

for a monumental sculpture at the Chicago Civic Center / Daley Center Plaza [installed 1967]. 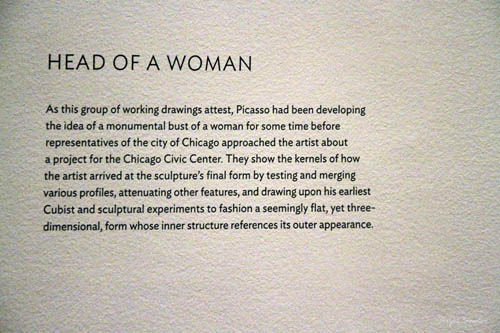 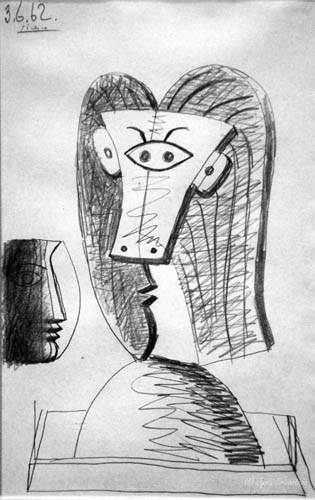 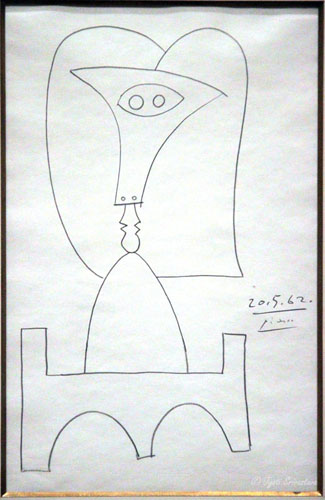 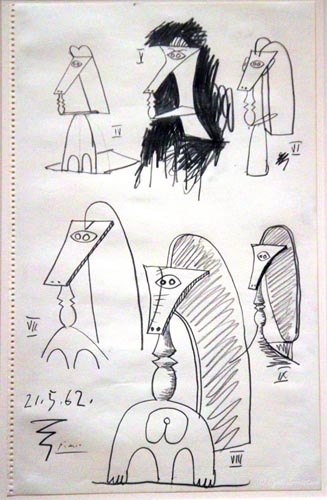 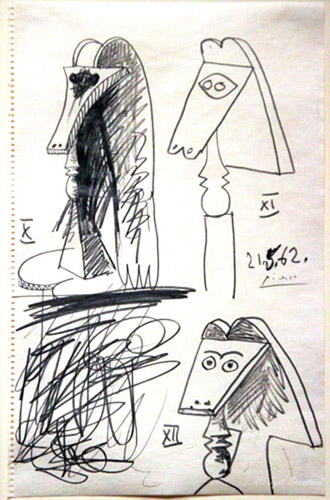 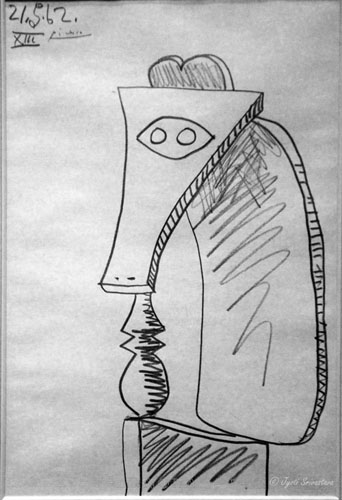 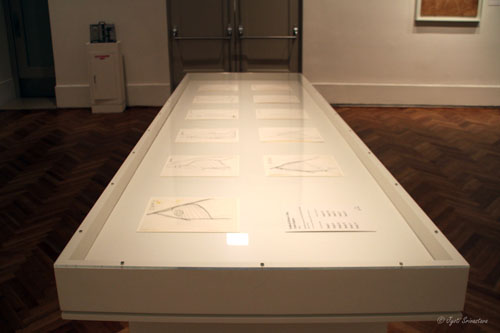 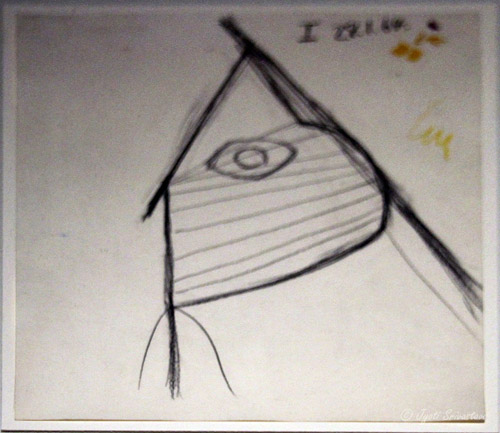 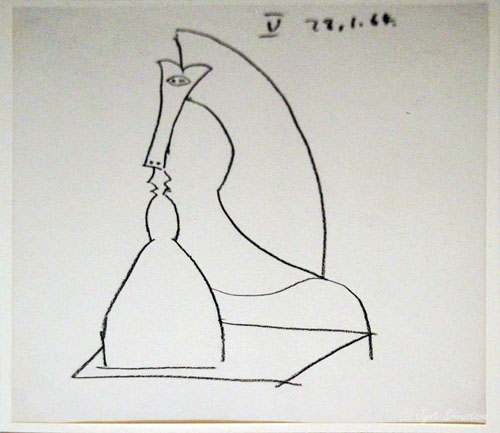 Picasso donated the maquette to the Art Institute of Chicago

desiring that these gifts, through them, belong to the people of Chicago.

As mentioned earlier,  in 1963,  architect William Hartmann  approached Picasso for making a monumental sculpture for Chicago Civic Center, which Picasso accepted.  In May 1964,  Hartmann visited Picasso, at his studio in France, to see his proposal design for the monument. From initial drawings the artist produced models, first in cardboard and other materials, and finally in steel. Picasso studied these maquettes in his studio for nearly a year, observing them from various angles and under different light conditions, before identifying his final design. To plan the sculptures construction, Picasso crafted two maquettes out of welded steel. He kept one in his studio and sent the other to Chicago. In August 1966, Hartmann returned to France to discuss the final design, including modification needed for the sculpture to withstand city’s strong winds. Extremely pleased with the project, Picasso donated his design to the city and his maquette to the Art Institute.

The  maquettes are at display at the Art Institute of Chicago includes:
[1] White chalk on plywood, and [2] Steel model 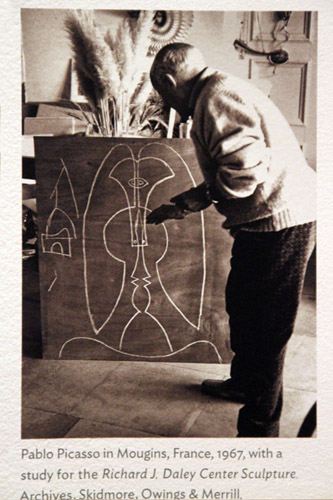 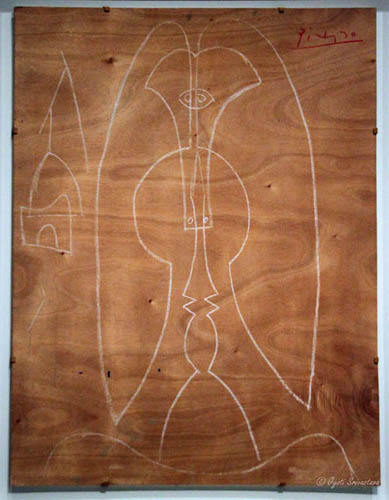 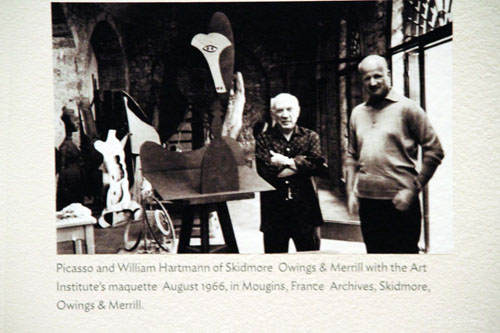 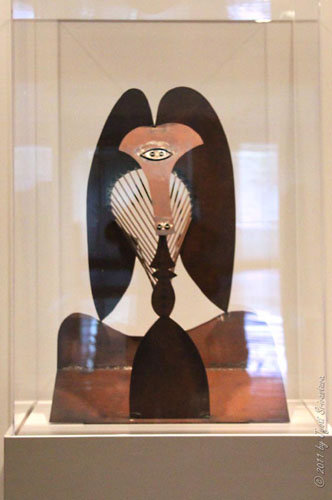 Unveiling of the sculpture, at the Daley Center Plaza: August 15, 1967 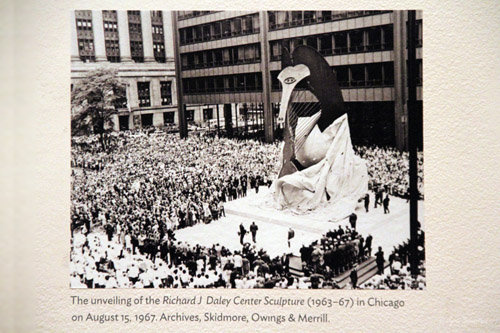 The monumental sculpture by Pablo Picasso,  was unveiled on August 15, 1967.

Initially the sculpture was initially greeted with lots of controversies. At the time of its installation in 1967, the abstract design, the non-traditional materials and huge scale were all subject of scorn and ridicule.  Art scholars have suggested that the statue is either a portrait of Picasso’s wife at the time or his Afghan dog from different angles. Some even interpret it as a horse, a baboon or a Viking Ship. However, this gift from the artist Picasso, to the people of Chicago, has over time become an icon of the city and a source of civic pride. While opinions of the sculpture’s subject matter vary, it is acknowledged as a monumental achievement in Cubism. 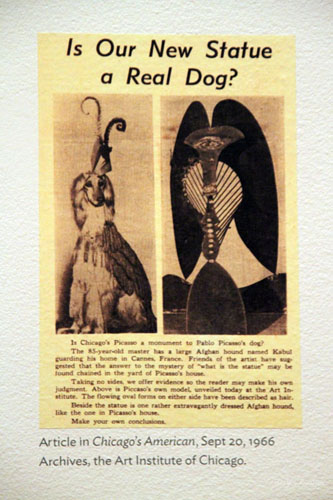 Is Chicago’s Picasso a monument to Pablo Picasso’s dog?

The 85-year-old master has a large Afghan hound named Kabul guarding his home in Cannes, France. Friends of the artist have suggested that the answer to the mystery of “what is the statue” may be found chained in the yard of Picasso’s home.

Taking no sides, we offer evidence so the reader may make his own judgement. Above is Picasso’s oen model, unveiled today at the Art Institute. the flowing oval forms on either side have been described as hair.

Beside the statue is one rather extravagantly dressed Afghan hound, like the one in Picasso’s house.

Make your own conclusion.

Also NOTE: This was published in September, 1966, before the sculpture was unveiled in August, 1967. However, the maquette was presented to the Art institute in 1965.

The Chicago Cultural Center, has on display an important document relating to this sculpture.. 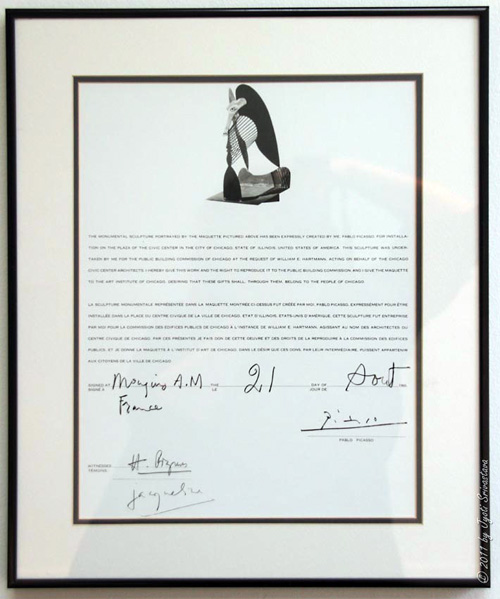 The monumental sculpture portrayed by the maquette pictured above has been expressely created by me, Pablo Picasso for installation on the plaza of the civic center in the city of Chicago, State of Illinois, United States of America. This sculpture was undertaken by me for the public building commission of Chicago at the request of William Hartmann, acting on behalf of Chicago Civic Center architects. I hereby give this work and the right to reproduce it, to the public building commission. I give the maquette to the Art Institute of Chicago, desiring that these gifts shall, through them, belong to the people of Chicago. 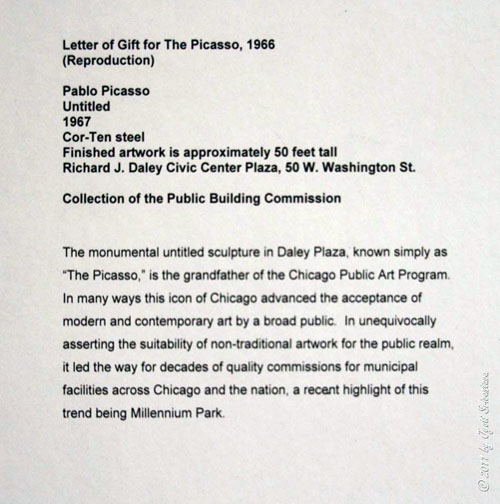 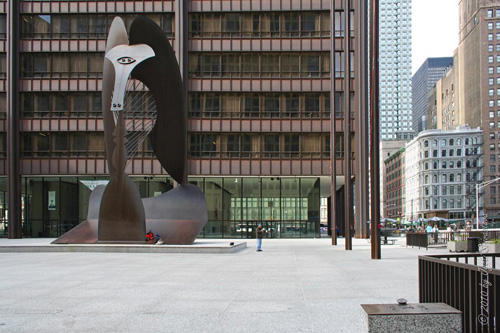 Picasso died on April 8, 1973, before ever visiting the United States to see the completion of his design. Following Picasso’s death, the Mayor and members of the City Council in the council meeting on May 9, 1973, publicly paid tribute to the famous artist with a resolution which read, in part, “Pablo Picasso became a permanent part of Chicago, forever tied to the city he admired but never saw, in a country he never visited, on August 15, 1967. It was on that day that the Picasso sculpture in the Civic Center Plaza was unveiled; it has become a part of Chicago, and so has its creator Picasso.”

Picasso, who refused to accept payment for his work, designed a 42-inch model of the sculpture that he presented as a “gift to the people of Chicago.” The actual sculpture, however, was manufactured by United States Steel Corporation in Gary, Indiana, where it was entirely pre-assembled, then disassembled, and subsequently shipped to the Daley Center to be reassembled in its final form. The steel that was utilized for the exterior of the Daley Center was also used for the Picasso sculpture, and, over time, developed the same patina.

The main building behind the Picasso sculpture, is the Richard J. Daley Center. It is the premier civic center of the City of Chicago in Illinois, consisting mostly of courtrooms and county offices. The Cook County Law Library and County Sheriff’s office also reside here. It was designed in the international architectural style by Jacques Brownson of the firm C. F. Murphy Associates and completed in 1965. At the time it was the tallest building in Chicago..