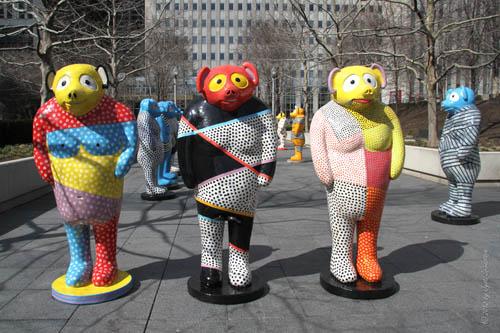 Boeing Galleries are a pair of outdoor exhibition spaces in the Millennium Park.  Millennium Park was opened in July, 2004;  and Boeing Galleries,  a year later in 2005.   These galleries were made possible by a generous donation of $ 5 million by the Boeing Co. to fund the construction of the outdoor spaces, and for an endowment to “help fund visual arts exhibitions” in them.  The mission of the Boeing Galleries has always been to bring in new, contemporary works, by living artists. The galleries are paved with granite and are surrounded by sycamore trees.  The north and south galleries are physically separated by AT&T Plaza, which hosts the Cloud Gate [The Bean], by Anish Kapoor.

The Exhibits at the Boeing Galleries, are presented by the Millennium Park, Inc., along with the  Chicago Department of Cultural Affairs and is sponsored by The Boeing Company with support from the Richard H. Driehaus Foundation.

NOTE: Lucas Cowan has been the curator of all the sculptural exhibits at the Millennium Park [which includes exhibitions by Jun Kaneko, Yvonne Domenge, Contemporary Sculpture From China and Mark di Suvero] 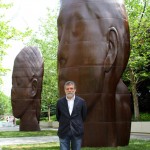 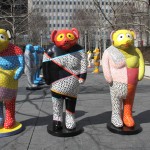 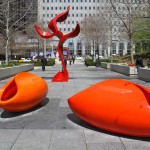 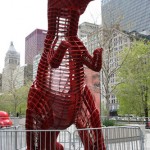 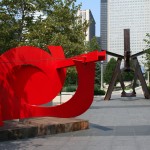 And More Exhibits : Boeing Galleries are not the only venue for exhibitions at Millennium Park.. 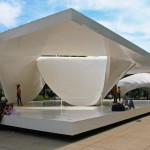 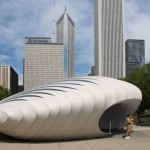 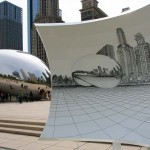 2009: Have No Narrow Perspective – by Ryan and Trevor Oakes 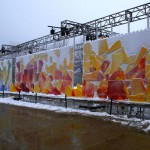 2008: Museum of Modern Ice / Painting Below Zero – by Gordon Holloran

Before these there have been two photo exhibitions..

2006: In Search of Paradise: Great Gardens of the World