Shiva is also known as Nataraj,  the “Lord of the Dance” [Sanskrit:  Nata = dance, and  Raja = king].  This image shows Shiva, the Nataraja,  performing Anand Tandava [Dance of Bliss].  However the image is popularly known as “Shiva Nataraja”.

Shiva Nataraja is an enchanting image, and can be seen in museums, temples, books and esoteric shops across the world. Virtually every element in the image is symbolic and has a deeper hidden meaning.  It combines in a single image Shiva’s roles as creator, preserver, and destroyer of the universe and conveys the Indian conception of the never-ending cycle of time.  The ring of fire as the universe, the drum of creation, the fire of destruction; the “abhaya Mudra” of fearlessness, the trampled dwarf of overcoming apathy and ignorance; the snake, an image of destruction and reincarnation.

Above Image: A 10th century Chola dynasty bronze sculpture of Shiva, the Lord of the Dance at the Los Angeles County Museum of Art [LACMA].  Image source: wikipedia.. click here.. 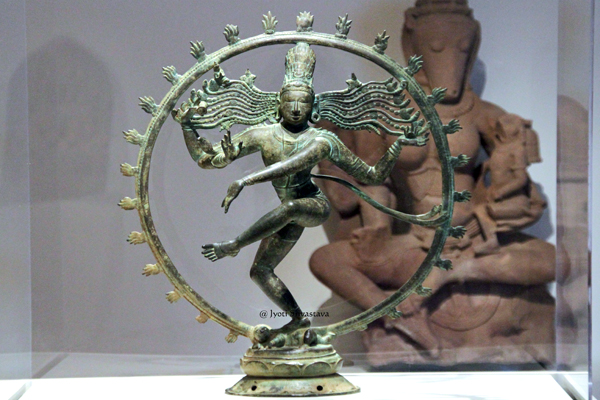 Shiva Nataraja, the Lord of the Dance / Art Institute of Chicago.

Artists in the Tamil region of southern India began to make this form of Shiva Nataraja in the early tenth century.  Shiva as a dancing figure first appeared in Indian stone temple sculpture in the 5th and 6th century CE, and it was not until the 10th century CE that the now familiar free-standing sculptural representation, typically in bronze, became standard. This world-famous Nataraja form evolved under the rule of the Cholas, in South India.

The Cholas came to power in the late 9th century, and until the late 13th century.  The Chola dynasty was one of the great empires of Indian history. From their capital at Thanjavur [Tanjore],  they ruled most of south India, as well as Sri Lanka, the Maldive Islands, and even parts of the Indonesian island of Java.  They also maintained diplomatic ties with countries as distant as Burma [Myanmar], China, and Malaysia.

The four centuries of Chola rule [9th to 13th century], is regarded by many as the age of grandeur in the history of the Tamil people. The Chola Dynasty heralded a golden age of exploration, trade, and artistic development.  The Cholas were also avid patrons of the arts and during their reign, poetry, drama, music, and dance flourished. Under Chola dynasty some monumental temples were made, that are still in existence today, such as Bhrihadishvara temple [Tanjore temple] in Thanjavur, completed in 1013. Temples functioned both as centers of religious life and practice and as hubs of economic, political, and social activity. Shiva was the most important authority in the religious and cultural world of the Cholas. there were both immovable stone sculptures and portable bronze sculptures of Shiva, and he was represented in his many different forms, including his non-anthropomorphic form of a pillar (lingam). There were also stone and bronze sculptures of Shiva’s family — his consort Parvati [Uma], their sons Ganesha and Skanda, and a variety of other deities would also be situated in temple spaces.

Although Shiva was depicted in many divine roles, it was Shiva Nataraja who became a symbol of Chola power and who remains relevant in India and throughout the world today.

Chidambaram is the birthplace of the sculpture and bronze image representation of Lord Shiva as the cosmic dancer that has since become notable as a symbol of Hinduism. The story of Shiva performing Anand Tandava originated in the temple city of Chidambaram, Tamil Nadu. The Cholas believed Chidambaram was the earthly home of Shiva and the sacred place where he performed the “Ananda Tandava” [Dance of Bliss]. The story takes place in the Tillai forest of Chidambaram. Shiva came to the forest in the form of Bhikshatana [a wandering beggar], to trick and humiliate the sages who neglected proper worship. In the battle that ensues, the sages send creatures, such as a demon and a snake, to attack him. Shiva dramatically defeats these malevolent forces and performs his victorious Ananda Tandava.

The bronze sculpture of Shiva Nataraja, is the result of great development in Chola period – in the field of metalwork, particularly in bronze sculptures. Bronze is an alloy consisting primarily of copper, commonly with about 12% tin and often with the addition of other metals [such as aluminium, manganese, nickel or zinc] and sometimes non-metals [such as phosphorus or silicon]. The expanse of the Chola empire stretched south-east towards Sri Lanka and gave the kingdom access to vast copper reserves that enabled the proliferation of bronze work by skilled artisans. Chola-period bronzes were created using the lost wax technique. Metal images have been cast throughout the centuries under the patronage of different dynasties in the north, south, east and west; but nowhere does it seem to have registered such an acme of development as it did under the Colas. It should be noted that when in worship, these images are covered in silk cloths, garlands, and jewels, and would not appear as they do outside a religious context. 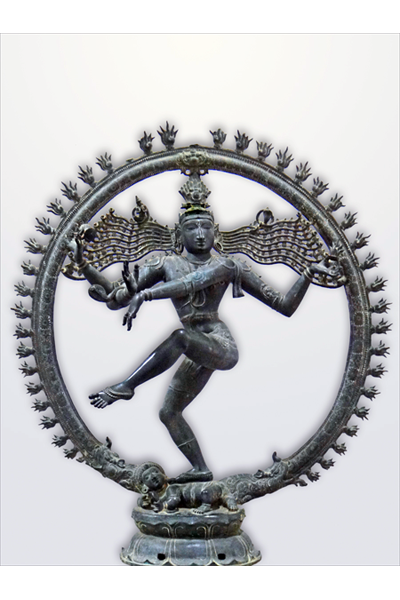 Shiva Nataraja, the Lord of the Dance.

Shiva is a complex character with a myriad of traits, sometimes seemingly in conflict with each other. Accordingly in this cosmic dance of Shiva, called Ananda Tandava, meaning, “the Dance of Bliss”, the Nataraja is represented in his triple role as Creator, Preserver and Destroyer and also symbolize the daily rhythm of birth and death. 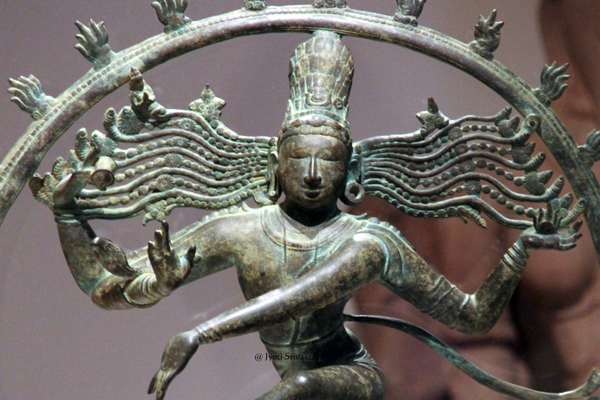 Shiva Nataraja, the Lord of the Dance.

Ring of Fire:
Shiva’s dance is set within a ring of cosmic fire [prabha mandala] which represents Time and which is shown as a circle to symbolize the Hindu belief that it is both cyclical and without end. Each flame has three points or five points. The ring is more arch-like in the first bronze sculptures. Eventually, a perfect circle become the norm.

Earrings:
Different earrings in each ear. On Shiva’s right ear is an earring in the shape of a makara [crocodile/ makara kundalam], usually worn by males. His left ear is adorned with a circular earring [sthri kundalam] worn by women. Together they symbolize the fact that Siva is neither male nor female, but transcends both.

Multiple arms:
In art of the Hindu tradition, deities are depicted with multiple arms to illustrate divine power. Shiva Nataraja’s four arms each take a different position or hold symbolic objects, showing his strength and constellation of skills.
Shrishti [creation/evolution]: His upper right hand holds a small hourglass shaped drum [damaru], that made the primal sounds of creation ‘Shrishti”, and initiates the cycle of creation.
Samhara [destruction]: His upper left hand holds a blazing flame [Agni], symbolizing His power of destruction, “Samhara”. The way both creation and destruction are held in the dance pose signifies that ultimately Shiva is responsible for the balance.
Sthiti [preservation / support]: His lower right hand makes the “Abhaya Mudra” [gesture of fearlessness]. It is the gesture of protection and peace of devotees and followers.
Anugraha [emancipation / release]: His lower left hand points toward his upraised foot, and makes the”Gaja hasta Mudra” [gesture for removal of obstacles, emancipation]. This hand position represents the elephant trunk of the Hindu god, Ganesha, who is the remover of obstacles and the son of Shiva. The term comes from the Sanskrit, gaja, which means “elephant”; hasta, meaning “hand”; and mudra, means “gesture”.

Legs:
Nataraja dances with His right foot on a dwarf, said to depict the demon Apasmara Purusha, [the personification of the dichotomy of illusion and ignorance], over which Lord Shiva [Nataraja] triumphs. The uplifted left leg is revealing grace, which releases the mature soul from bondage.

Locks:
Shiva’s locks also contain a skull, a datura blossom, and a crescent moon and the figure of Ganga [ the personification of the river Ganges]. According to Hindu mythology, River Ganga was brought gently from the heavens down to earth in the god’s hair. Sometimes the god’s hair is topped with a fan of konnai leaves. The energy of his dance makes his hair fly to the sides. The symbols imply that, through belief in Shiva, his devotees can achieve salvation.

Clothing:
Shiva wears an article of clothing around his waist called a veshti in south India. This garment is also worn by Hindu priests. Across his torso is the sacred thread of the Brahmin priestly class.

The lotus pedestal signifies Om, the sound of the universe. 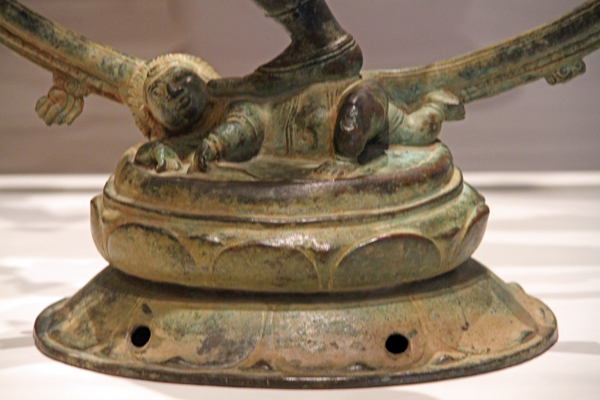 This Tandava is a divine dance performed by the Hindu god Shiva that is the source of the cycle of creation, preservation and dissolution.

The Hindu scriptures narrate various occasions when Shiva or other gods have performed the Tandava.
Rudra Tandava: When Sati [first wife of Shiva, who was reborn as Parvati] jumped into the Agni Kunda [sacrificial fire] in Daksha’s Yajna and gave up her life, Shiva is said to have performed the Rudra Tandava to express his grief and anger. 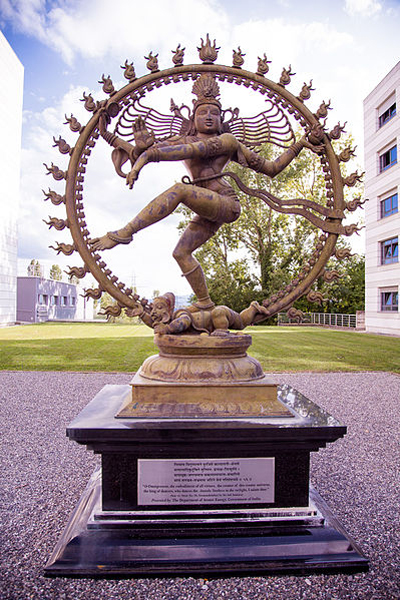 A statue of Shiva engaging in the Nataraja dance at CERN in Geneva, Switzerland./ Image attributed to Kenneth Lu, via wikimedia commons.

In 2004, a 2m statue of the dancing Shiva was unveiled at CERN, the European Center for Research in Particle Physics in Geneva. The statue, symbolizing Shiva’s cosmic dance of creation and destruction, was given to CERN by the Indian government to celebrate the research center’s long association with India. A special plaque next to the Shiva statue explains the significance of the metaphor of Shiva’s cosmic dance with quotations from Fritjof Capra:[citation needed]

Hundreds of years ago, Indian artists created visual images of dancing Shivas in a beautiful series of bronzes. In our time, physicists have used the most advanced technology to portray the patterns of the cosmic dance. The metaphor of the cosmic dance thus unifies ancient mythology, religious art and modern physics.