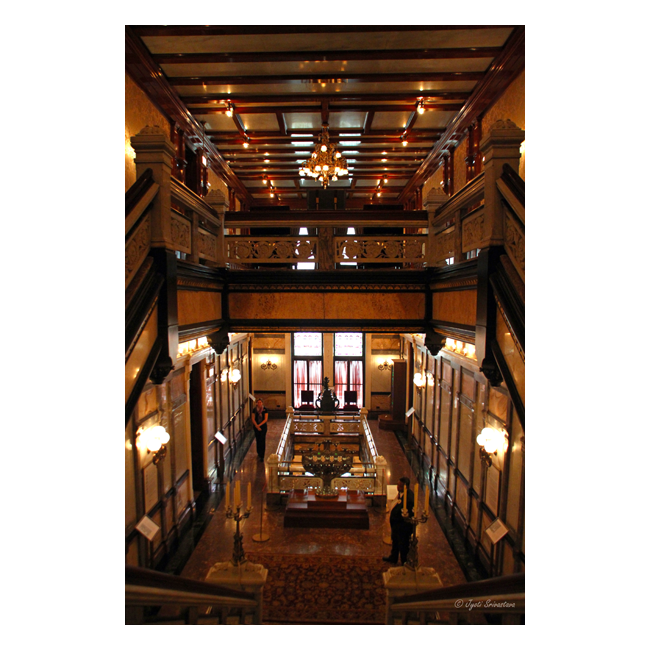 Location: 40 East Erie Street on the Near North Side in Chicago, Illinois, near the Magnificent Mile.

The building was made in 1883, as a residence for Samuel Mayo Nickerson, a wealthy Chicago banker. The Driehaus Museum is housed within the historic Nickerson House. The museum is named after Richard H. Driehaus, a prominent Chicago businessman, philanthropist and art collector.  Driehaus purchased the mansion in 2003, and after extensive restoration, opened the property to the public as the Richard H. Driehaus Museum in 2008. The museum displays some original furnishings from the Nickerson period [Gilded Age], as well as Driehaus’ private collection of Fine and Decorative Arts of late 19th and early 20th-century decorative arts objects, including a large private collection of statues, paintings, furniture, and Louis Comfort Tiffany glass.

The building was designed by one of Chicago’s earliest prominent architects, Edward J. Burling of the architectural firm of Burling & Whitehouse. It took four years to complete the house [1879-1883]. The limestone and sandstone mansion was built at the cost of $450,000, then a top price ever paid for a Chicago residence. The three-story Italianate mansion, with 30-rooms, has a total area of about  25,000 square feet. The place, apart from  luxurious woodwork, tiles, glass mosaics,  statues and furniture, also has a wide variety of marbles, which earned it the nickname of “The Marble Palace”.

Construction on Nickerson House began in 1879, shortly after the 1871 Great Chicago Fire and the resulting development of city ordinances for the fireproofing of masonry structures. The mansion was lauded as one of the first truly fireproof residences in the city. The masonry is brick, with partition walls carried up to the roof. Beneath the highly decorative flooring boards are flooring strips bedded in mortar, followed by brick arches supported by iron beams.

In 1976, the Samuel M. Nickerson House is added to the National Register of Historic Places.
June 8, 200, The Nickerson mansion was open to public as Driehaus Museum.
In 2008, the Driehaus Museum receives the Chicago Landmark Award for Preservation Excellence. 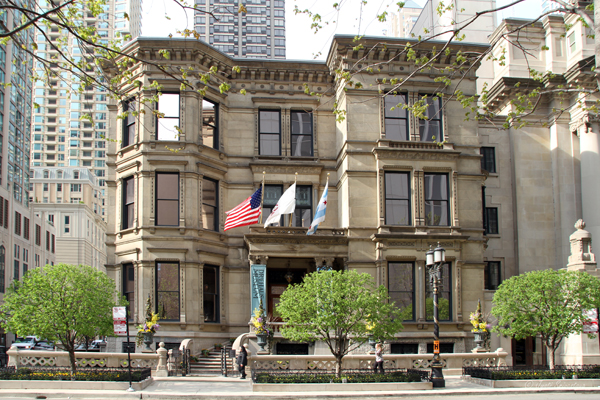 Here is a brief history of different owners of the mansion..
1883-1900: The house was commissioned by  Samuel M. Nickerson, a wealthy Chicago banker, one of the founders of the First National Bank of Chicago and Union Stockyards National Bank, as well as having interests in liquor and wine businesses and an explosives company during the Civil War. Nickerson, his wife Mathilda Pinkham Crosby, and their son Roland lived in the house from 1883 to 1900. The mansion was used for many social gatherings characteristic of the Gilded Age, including a masquerade ball and a number of receptions. It also served as exhibition space in which the Nickersons displayed their renowned art collection of American and European paintings and drawings, Indian jewelry, and Japanese and Chinese ivories and curios. In 1900 the Nickerson Collection was donated to the Art Institute of Chicago. Upon retiring from his position as president of the First National Bank of Chicago in 1900, Nickerson sold the house to Lucius George Fisher.

1900- 1919: Lucius George Fisher, who lived here till he died in 1916. After purchasing the house, Fisher hired the Prairie School architect George Washington Maher to redesign Nickerson’s art gallery, making it into a trophy room and rare book library. Among other features, Maher had a stained glass dome built to replace the room’s skylight. The iridescent glass tile fire surround of the mantle was created by the Chicago firm of Giannini & Hilgart.
The family’s decision to sell the mansion after Fisher’s death in 1916 sparked what is believed to be Chicago’s first successful preservation effort. After the house remained on the market for three years without a buyer, a group of prominent Chicagoans, including Cyrus Hall McCormick II, William Wrigley Jr., and Julius Rosenwald, were concerned about the possible demolition of the magnificent residence. The group raised the money to purchase the house as a civic effort, and in 1919 presented the deed to the American College of Surgeons. This gift spurred the College of Surgeons’ decision to make Chicago its headquarters.

1919-1965: The American College of Surgeons utilized this mansion as administrative offices and meeting rooms.

RESTORATION 2003-2008: When the restoration began in 2003, the building itself was deemed in good condition. It was, however, very dirty. One of the most noteworthy elements of the restoration focused on cleaning the exterior. The facade is predominantly porous sandstone, which had over the years had accumulated a thick crust of grime and pollutants. The formerly light gray stone had become a deep, dark black. In 2004 CSOS Inc., an Illinois-based conservation group, was awarded the contract to clean the exterior of the Nickerson Mansion. During an 18-month period between 2004 and 2005, CSOS Inc. undertook the restoration of an entire building exterior. Traditional methods to blast away or clean the pollutants with chemicals were considered unsuitable, so the exterior was cleaned by lasers. This was the first time an entire building had been cleaned using laser technology in United States, although it is commonly utilized in Europe for cleaning sculptures.
The conservation of the ceiling panels and the Lincrusta-Walton wall covering was done by Parma Conservation. The restoration of architectural woodworks was by Parenti & Raffaelli and restoration of the Fisher dome was by Botti Studio.

Although the mansion has been restored, the Driehaus Museum does not re-create the Nickerson period but rather broadly interprets and displays the prevailing design, architecture, and decorating tastes of Gilded Age America and the art nouveau era in permanent and special exhibitions. The rooms display some furnishings original to the Nickerson period, but it mainly consists of Driehaus’ private collection of late 19th and early 20th-century decorative and fine arts objects, including a large private collection of statues, paintings, furniture, and Louis Comfort Tiffany glass. 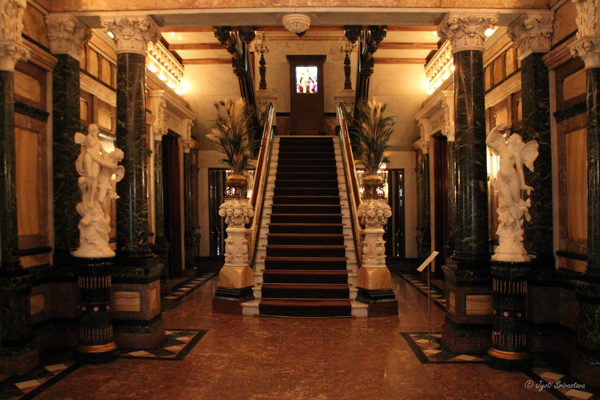 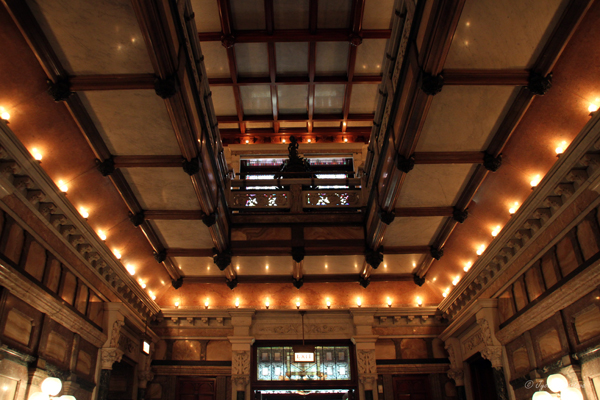 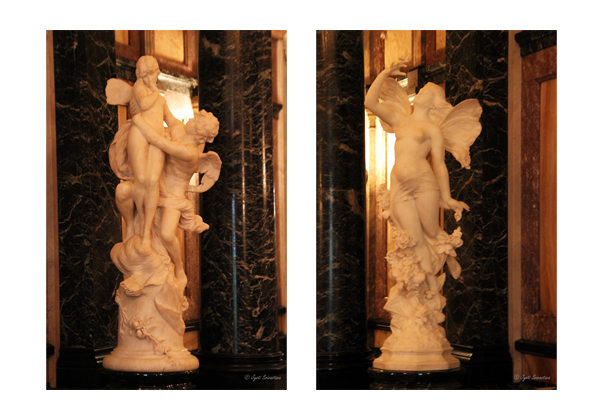 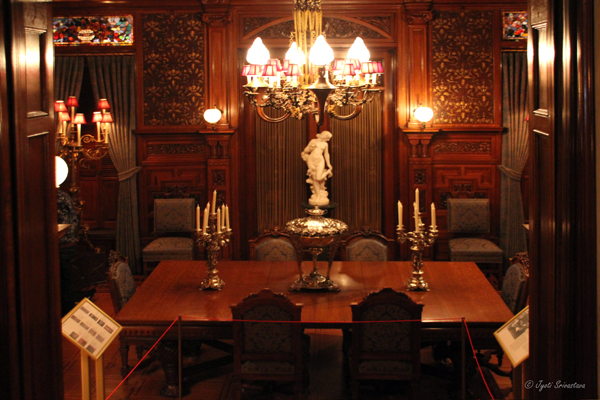 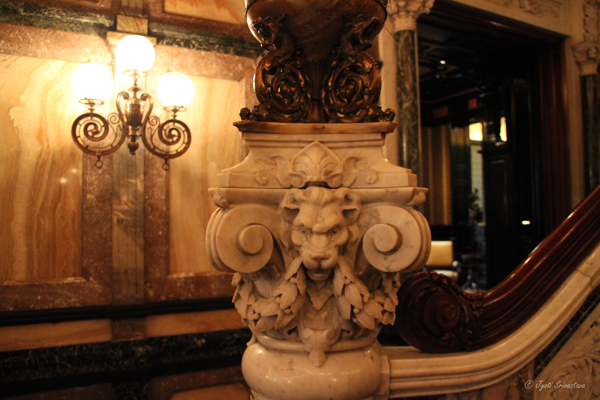 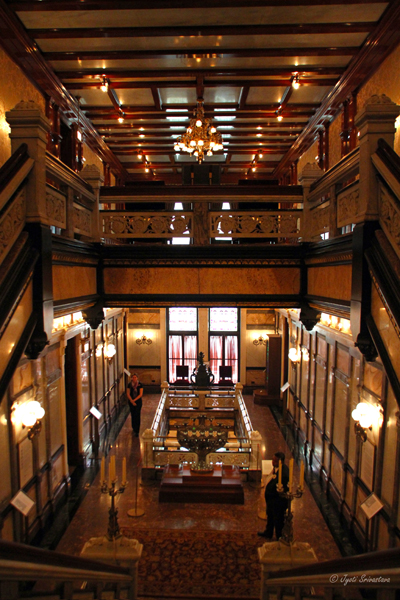 SECOND FLOOR: was devoted to living quarters. The second floor opens into a rectangular hall, and is surrounded four bedroom suits. Each of the bedroom had a designated bathroom, a modern feature not often found in even the grandest of the homes of this periods. Today the rooms serve as galleries for special exhibitions.
In the center of the hall is a rectangular opening to the Main Hall below, which is enclosed by balustrada embellished with panels of alabaster decorated with scrolling acanthus leaves.
At the south end of the hall stands an immense Japanese bronze vessel purchased by Samuel M. Nickerson at the 1893 World’s Columbian Exposition.
At the north end stands a Benediction Candelabra, that was displayed at the 1893 World’s Columbian Exposition at Tiffany’s award-winning Byzantine inspired chapel and ecclesiastical wares. 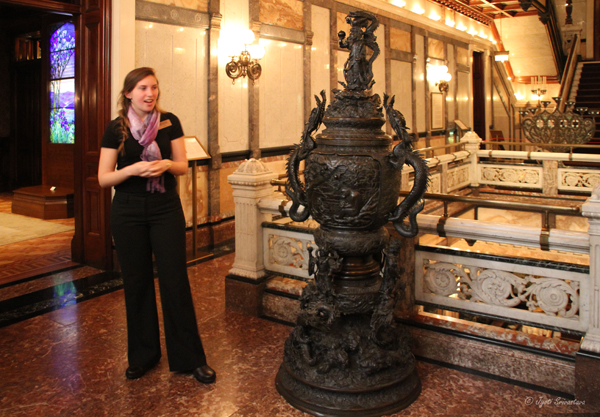 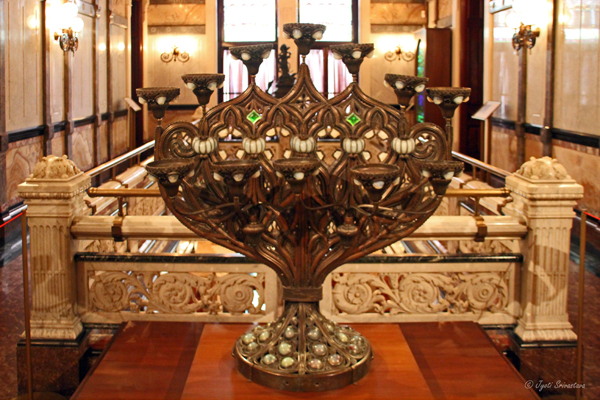 The Driehaus Collection is one of the country’s leading private collections of works by preeminent American decorative designer Louis Comfort Tiffany. Nickerson mansion has a beautiful selection of Tiffany artifacts, like this rare nautilus shell centerpiece lamp. The lamp base is inlaid with mother of pearl and features eight real nautilus shells. 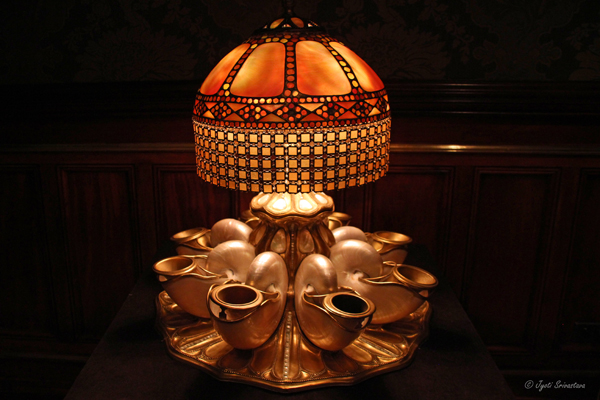 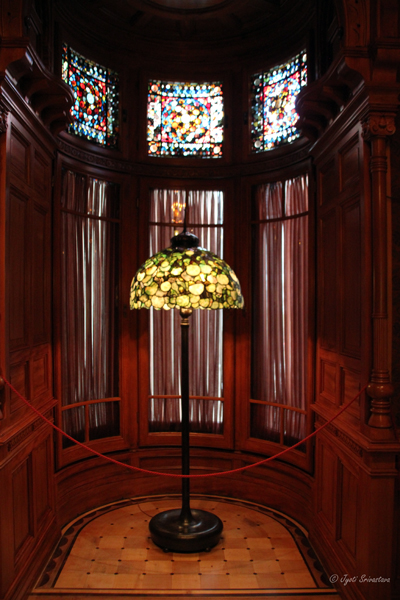 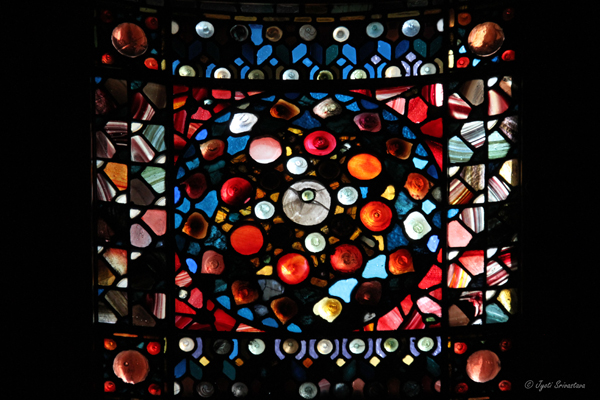 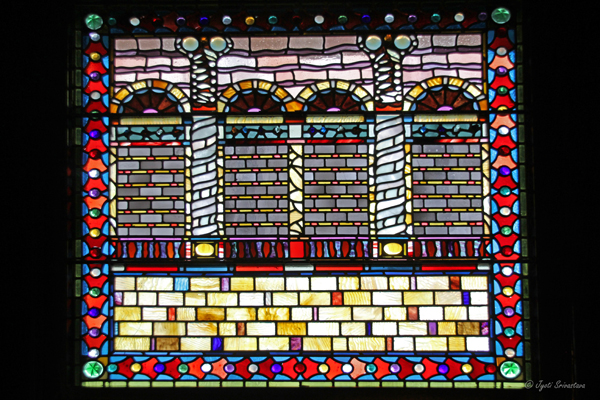 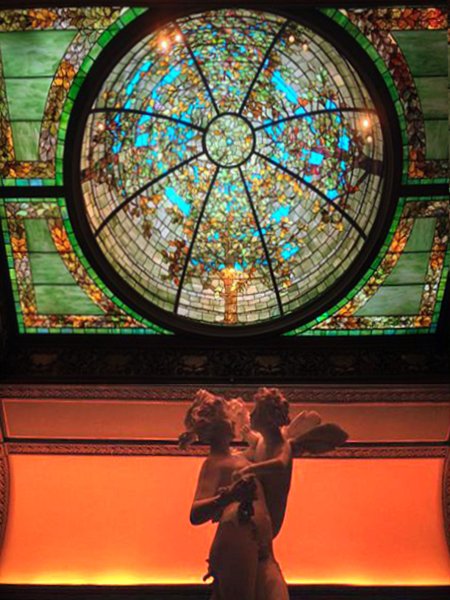 NICKERSON ART GALLERY:  To me, One of the most striking rooms of the mansion is the Nickerson Art Gallery at the northwest corner of the main floor. The interior as it stands today was redesigned during the Fisher period of occupancy. In 1900–1901, Lucius Fisher engaged architect George Washington Maher to redesign the Nickerson Art Gallery as a Trophy Room to display his collection of game animals, weaponry, and rare books. The crowning achievement of Maher’s new decorative scheme was the installation of a striking stained glass dome that replaced the original Nickerson period clear glass skylight. Fisher’s addition also includes a monumental fireplace fronted with a striking Art Nouveau style mural in iridescent glass tile. A beautiful marble sculpture “Cupid and Psyche” by Italian sculptor Oscar Spalmach, stands directly beneath the stained glass dome.
Among the renovation works of the mansion under Richard Driehaus includes the 2004, the restoration of the Fisher dome by the Botti Studio. Note: Botti Studio has restored many historically significant buildings including the largest Tiffany dome in the world at Chicago Cultural center and also the Fullerton Hall Tiffany dome at the Art Institute of Chicago. 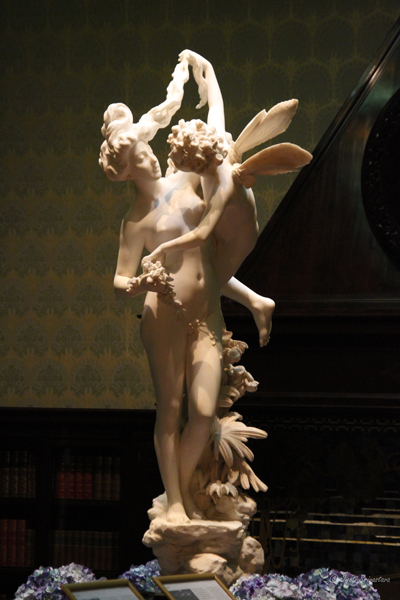 Cupid and Psyche – by Oscar Spalmach

“Cupid and Psyche”- the largest marble sculpture in the Nickerson mansion – stands directly beneath the gorgeous stained glass dome. The sculpture is made by Italian sculptor Oscar Spalmach, when he was working in Orazio Andreoni’s studio in Rome.

So much more can be written about Driehaus Museum. But its best you go and have a look yourself and be immersed and mesmerized by its beauty and grandeur.
But before I stop, two more things related to Driehaus Collection:
[1] First Exhibition at Museum “Louis Comfort Tiffany: Treasures from the Driehaus Collection”
[2] Richard H. Driehaus Gallery of Stained Glass at Navy Pier, Chicago. 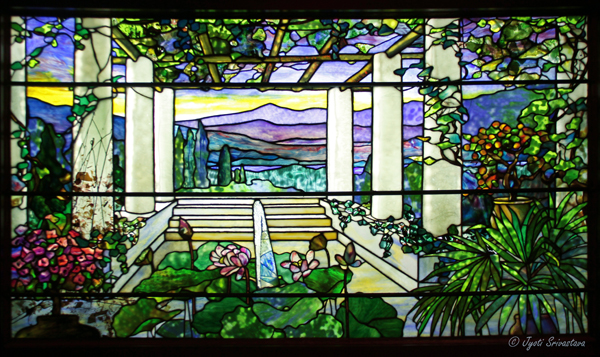 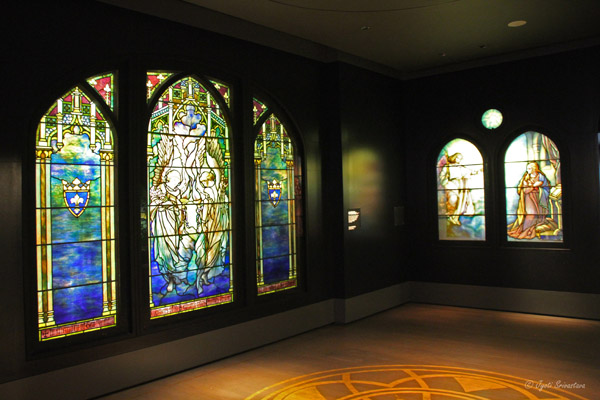