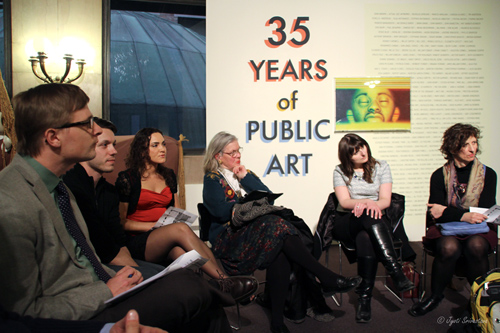 Above Image: Scene from Public Art Town Hall # I  at Chicago Cultural Center.

NOTE: This post is not a critical evaluation of the success or failures of this Town Hall meeting. This post provides a background and context to why it was organized and what topics were discussed…

Before I move on, I think, it is essential to clarify terms like Chicago Cultural Plan and DCASE.

The City of Chicago’s Department of Cultural Affairs and Special Events [DCASE] is entrusted with the implementation of the Chicago Cultural Plan. The DCASE is dedicated to enriching Chicago’s artistic vitality and cultural vibrancy. Under DCASE, there are several divisions, and each is responsible for different aspects of cultural activity. So there are different directors  – for Fashion, Design and Culinary Arts, Visual Arts, Events and Programming Division, Performing Art, and Cultural Grant Program – working under DCASE, headed by the commissioner of DCASE. In fact few days ago, there was a “Meet The DCASE” event, in which the various directors spoke about their work.. click here..

From the DCASE, the Public Art Town Hall # I was represented by
Commissioner of DCASE: Michelle T. Boone
Director of Cultural Planning at DCASE: Julie Burros
Director of Public Affairs, Marketing & Communications at DCASE: Jamey Lundblad
Director of Visual Art Department at DCASE: Daniel Schulman.
Others from the Visual Art department of DCASE present in the meeting were Nathan Mason and Greg Lunsford.

The public participation was also very strong, with artists and art advocates participating in the process. 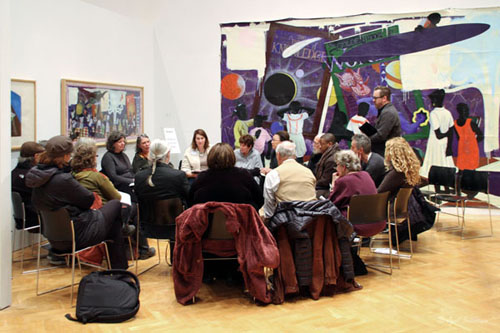 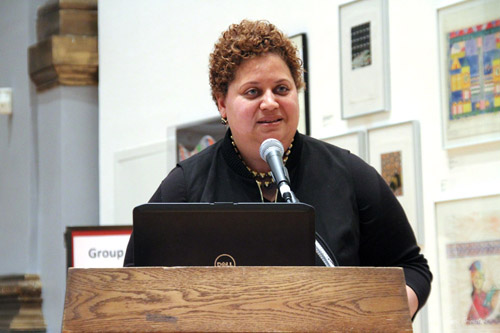 Michelle T. Boone Commissioner DCASE at the City of Chicago

The first Public Art Town Hall meeting began with an introduction by Michelle T. Boone, Commissioner at DCASE, who set the stage for the evening, outlining the objective for the meeting. Her entire speech can he heard on the attached video. Here is the text..

Good Evening! Alright! I am Michelle Boone and I am Commissioner for the Department of Cultural Affairs and Special Events, and I cant tell you how thrilled we are, we all are,  to have you here tonight. I really want to thank you for taking time out from your busy schedule to join us this evening,  for the first of the two Public Art Town Hall meetings this spring. Our Goal is to develop a new comprehensive public art plan for the city of Chicago. I also want to thank my colleagues, the team of Visual Art at DCASE, for embracing and inviting a public engagement process for developing a new plan and vision for public art in Chicago.

Every person in every neighborhood should be able to experience art and culture. So we are looking to the future as we develop a new strategy for public art. In fact this was the recommendation of the newly released Chicago Culture Plan. Mayor Emanuel and I are committed to expanding access to the art and supporting strong vibrant neighborhoods. So we are really looking forward to getting feedbacks from artists and art advocated like you. Today, we invited you to learn more about Chicago Culture Plan and the city’s public art program. But we also want to share with you, the best practices in other cities and learn and see how we can incorporate these in what we do. But also have an opportunity to brainstorm new ideas in smaller groups to discuss the role of public art in the city, think about temporary public art projects, new genres into public art sphere, and funding options for more public art.  And last, but certainly not the least, I hope you all enjoy this exhibition celebrating 35 years of public art in Chicago.

Our coming exhibits program includes Gallery Talks on April 8 and April 15, Meet the Artists on April 25, and our Second Town Hall on April 30, will be in Washington Park Arts Incubator Space in the south side. So please tell your friends to join us.

After the introduction by Commissioner DCASE Michelle T. Boone, the event proceeded with the Director of Cultural Planning at DCASE Julie Burros. The first half of the speech was all about Chicago Culture Plan. I begin with the later part, which was more relevant to the Public Art Plan. The entire speech of Julie Burros can be seen on the video in the third video, seen later in the post…

PUBLIC ART CURRENT SITUATION
Where are we now? Chicago has incredible reputation for great public art. There is huge amount of interest in expanding public art. But the reality is that we have very limited avenues of support. The city processes are unclear and inconsistent regarding the advancement of projects that are artists initiated or developed at grass roots level.  The Percent for Art funding has very little scope of new art when there is no new building or major renovation project.

The Percent for Art Ordinance states that 1.33% of the construction or major renovation budget of a city-owned or city-financed building or structure or certain outdoor improvements is to used to acquire or install permanent artwork at that site. The city of Chicago has Percentage for Art ordinance since 1978. Chicago was not the first city to pass this, but has been a model to many other places. However, now in 2014, there is need to update this.

So we starting this Public Art Plan from scratch

Core Values:
– PA is an equal and interdependent element of a remarkable city’s infrastructure
– Innovative Public Art is artist led
– Artists should be embedded into planning and development processes of widespread city initiative
– Artists are professionals and must always be paid for their diverse and valuable contribution
– For a city to retain artists, artists need opportunities to experiment and grow at every phase of their development
– Neighborhood should be empowered to employ professional artists in the transformation of communities.
– There is great return when we invest in the ideas of the world’s most exciting artists, many of whom live right here in Chicago. 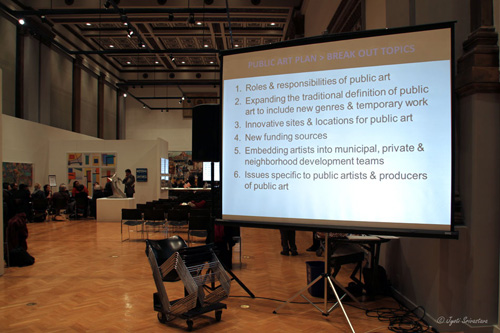 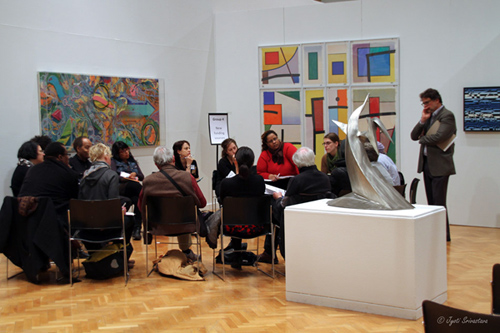 RESULTS from BREAK UP GROUPs..
In their own words..

I could not be there for the entire event..

And here is their Interactive Map.. Loop.. Southwest Side.. Near South Side.. Southeast Side.. North Side

Topic: [2] Expanding the traditional definition of Public Art to include new genres and temporary work

Some photos from the day! 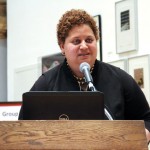 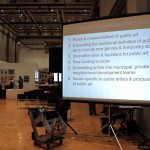 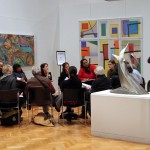 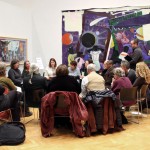 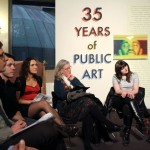 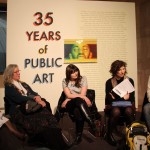 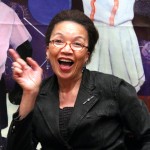 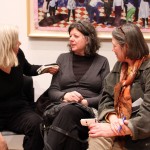 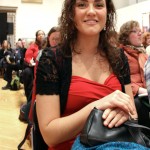 If it interests anyone, here is the entire speech Julie Burros on Chicago Culture Plan
with  bullet point texts.. click here..

And here is their Interactive Map.. Loop.. Southwest Side.. Near South Side.. Southeast Side.. North Side