Public Art in Chicago: How much do they capture the essence of Chicago? 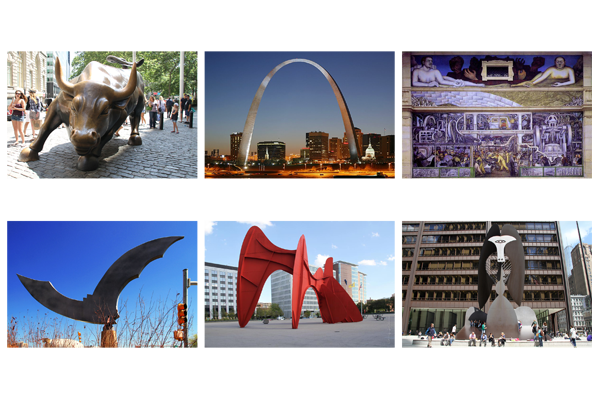 The above image shows some iconic Public Art pieces that have become unique symbols of the city and reflect the historical and cultural identity of the place.

From top left:
the Charging Bull is a symbol of New York,
the Gateway Arch of St. Louis,
Industry murals of Detroit,
Night Wing bat sculpture of Austin,
La Grande Vitesse of Grand Rapids, and coming home,
Picasso’s Untitled sculpture is a symbol of Chicago!

These public art pieces are widely accepted as symbols of their cities, as they represent facets that are deeply entrenched into the history and culture of that place.

One of the most interesting stories is of the “Charging Bull” by New York based artist Arturo Di Modica. In Dec 1989, he left this 18 feet long, weighing more than three tons sculpture under a Christmas tree as a giant gift to the city of New York. Modica conceived the idea of making a charging bull – the universal symbol of an upward market trend – as a way to celebrate the can-do spirit of America and especially New York, and saw it as a perfect antidote to the Wall Street crash of 1986. Since then, it has become the symbol of Wall Street optimism!

The Gateway Arch of St Louis is a memorial to Thomas Jefferson, who bought Louisiana Territory that made the Westward Expansion possible.

The “Detroit Industry” murals by Diego Rivera was inspired by the workers and scenes at the Ford River Rouge plant of Detroit.

Alexander Calder’s bright red 54-foot long sculpture La Grande Vitesse is French for “the great swiftness”, which can be translated as the Grand Rapids, is the symbol of Grand Rapids.

Coming home, Picasso’s monumental Untitled sculpture at Daley Center Plaza is the symbol of city of Chicago! But what’s its relation with Chicago? Picasso never came to Chicago, or for that matter, he never set foot in America. Picasso never explained what it represented and it is still open to interpretations. Is it a woman? Is it a dog? Who knows? Whatever it is, the sculpture does not represent any historical or cultural facet of Chicago! 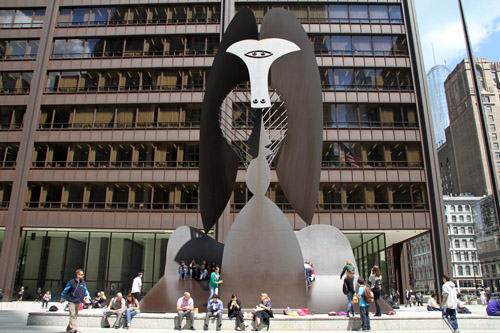 So why does Picasso’s Untitled sculpture represent Chicago?
I have often wondered about this.
The most interesting argument I found was a write-up neatly framed and hung on the walls of Chicago Cultural Center.
It reads..
“The monumental untitled sculpture in the Daley Plaza, known simply as “The Picasso” is the grandfather of the Chicago Public Art Program. In many ways this icon of Chicago advanced the acceptance of modern and contemporary art by a broad public. In unequivocally asserting the sustainability of non-traditional artwork for the public realm, it led the way for decades of quality commissions for municipal facilities across Chicago, and the nation. A recent highlight of this trend being Millennium Park”. 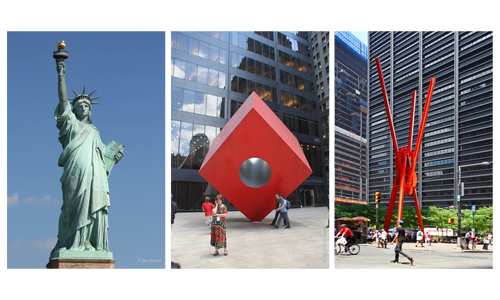 Compare this with symbols of New York, apart from the “Charging Bull” which I mentioned earlier, the other most famous symbol is the “Statue of Liberty” –  beacon of hope for waves of immigrants! This symbol is deeply rooted in the history of New York! Some other of New York’s iconic sculptures like “Red Cube” by Isamu Noguchi, “Joie de Vivre” by Mark di Suvero and the mural “Crack Is Wack” by Keith Haring are all made by New York based artists!

I have often wondered why many historical & cultural events and fun facts of Chicago have not translated into iconic public art pieces! The name Chicago is associated with  Windy City, Skyscrapers, Chicago Blues and the Great Chicago Fire. I have often believed that “Windy City” can inspire the most imaginative sculptures!  It’s sad that Daniel Burnham, co-author of  the “Plan of Chicago” whose famous words “Make No Little Plans” is the city’s unofficial mantra, still does have a memorial! What about memorials of famous women of Chicago like Ida B. Wells, Mahalia Jackson, Gwendolyn Brooks and  Bessie Coleman? In Austin, Texas, a huge sculpture of Barbara Jordan is right at the airport, and cannot be missed! Boston boasts of a Women Heritage Trail. In Chicago, we do have memorial to Jane Addams [Helping Hands by Louis Bourgeois.. click here.. ], in Prairie Avenue, which really is off from any tourist hot-spots. And who doesn’t like Chicago Blues? 47th Street Blues District does have some commemorative signs and promotional statues.. click here..; but the place is definitely off the tourist map!

So when tourists come to Chicago they do see world class art! But the most famous of these art pieces are not from Chicago-based sculptors and most of them do not symbolize Chicago’s historical or cultural events! Tourists take photos and share on social media. The best form of advertisement is by word of mouth! It may be called missed opportunity. Or to give a positive spin, Chicago has tremendous opportunity to promote its history and culture through public art at tourist destinations! Public art that are made by local artists that represent authentic Chicago flavor! 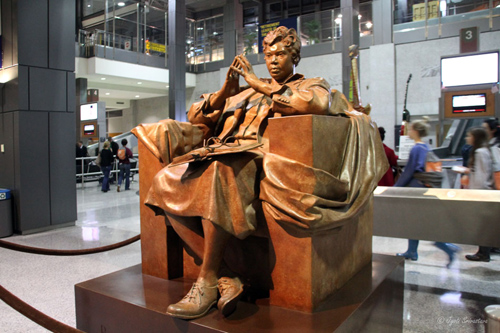 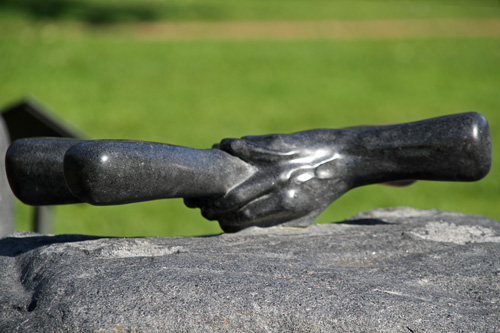 Millennium Park comes close to promoting what-is-Chicago!. Its two most popular attractions are the Cloud Gate by Anish Kapoor and the Crown Fountain by Jaume Plensa. The Cloud Gate, aka The Bean, reflects the famous Chicago skyline, and The Crown Fountain projects 1000 faces of residents of Chicago. However none of these are made by Chicago artists. 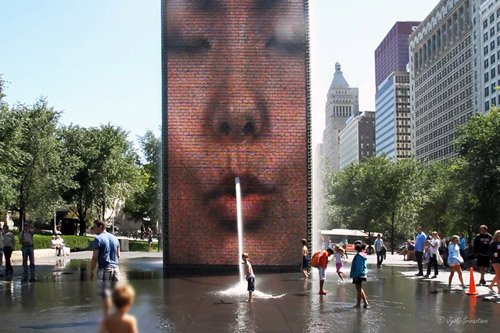 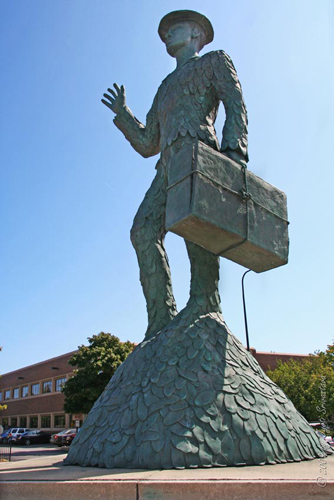 Monument to the Great Northern Migration by Alison Saar, a part of King Drive Gateway Project of 1996.

One of my favorite projects has been the King Drive Gateway Project of 1996. it was part of the ongoing program to rejuvenate the Bronzeville area. The project had representatives from the community in the advisory committee, and also included artists from the area. Its Public Art represent history of the area. The most remarkable is “Monument to the Great Northern Migration” by Alison Saar. This bronze monument depicts a man wearing a suit made of shoe soles rising from amount of soles. The soles worn and full of holes symbolize the often difficult journey from the south to the north. It commemorates all the African-American men and women who migrated to Chicago after the Civil War. Other attractions include “Bronzeville Walk of Fame” by Geraldine McCullough and “Bronzeville Benches” by various Chicago-based artists! At the entrance is Recognition Panels by Mary Brogger, who then was Chicago resident and has now moved to LA!

And NO! Although its tempting to put it on city officials in-charge of Public Art programs, but its not so! The Visual Arts Department at Department of Cultural Affairs and Special Events [DCASE], oversees the Percent-for-Art program, which mandates that at least 50% of the commissions go to local artists. However, these artworks are found in libraries, police stations, fire stations, office buildings, health plazas and other public buildings, and not in outdoor public spaces. The Chicago Transit Authority [CTA] which runs “Art in Transit” program also commissions local artists.

I don’t even know if it bothers anyone – that some of the most famous public art pieces of Chicago are not made local artists, and do not represent any historical or cultural event in Chicago! But this has been on my mind for some time and I thought I would just sit down and write about it!

Some of the most famous sculptures at outdoor public spaces of Chicago: Pablo Picasso’s “Untitled” [1967], Alexander Calder’s “Flamingo” [1974], Marc Chagall’s “Four Seasons” [1974], Harry Bertoia’s “Sounding Sculpture [1975], Isamu Noguchi’s Fountain, [1976], Claes Oldenburg’s “Batcolumn” [1977], Henry Moore’s Sundial [1980], Joan Miro’s Chicago [1981], Jean Dufuffet’s “Monument With Standing Beast”[1985], and Sol Lewitt’s “Lines in Four Directions”[1985], Anish Kapoor’s “Cloud Gate” [2004], Jaume Plensa’s “Crown Fountain” [2004] – where are the Chicago based artists?
These are amazing sculptures! Chicago is definitely museum without walls, but in the mix we should have some Chicago based sculptors, or sculptures that represent the essence of Chicago!