Observations: Public Art in Chicago – I [Chicago’s Cultural Features missing in its collection of Sculptures???]

Public Art forms the cultural identity of a place. Chicago has a huge collection of sculptures in public places. One thing conspicuous by its absence – sculptures that reflect Chicago’s defininy features, which sets Chicago apart from other cities. To a tourist coming here, the name Chicago conjures terms like Windy City, Architecture, Skyscrapers, Blues, Taste of Chicago.. to name just a few. I wonder why downtown Chicago, lacks public art that highlight these authentic flavors of the city.

I am talking about these to be placed in prominent tourist destinations. The idea being that even if somebody has a small stay in the city, they find these art pieces, take photographs and share them. The photograph at the start of the post is from the Blues District on 47th Street. It is awesome to revitalize neighborhoods. But people coming here for a few days, vacation or business trips, usually make downtown their inevitable stop. So it would be nice to see these art pieces in places that visitors to Chicago frequent! These can become the defining images of Chicago. So through public art,  the defining images of Chicago, are of characteristics that define Chicago.

It would be so much fun to see the interpretation of artists of local, national or international stature, on these very homegrown authentic Chicago features.

I would especially love to see the creativity in showcasing Chicago as the Windy City, and even more impressed if someone links it to the “hot air” politicians and city boosters, who earned the city the nickname! 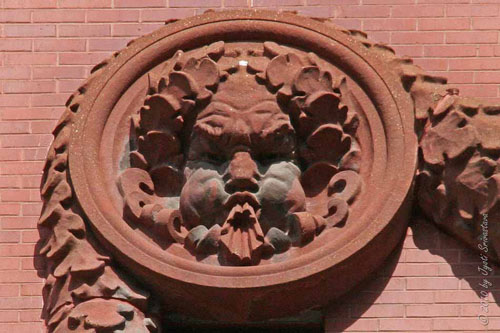 Chicago as the “Windy City” on the walls of Harold Washington Library.