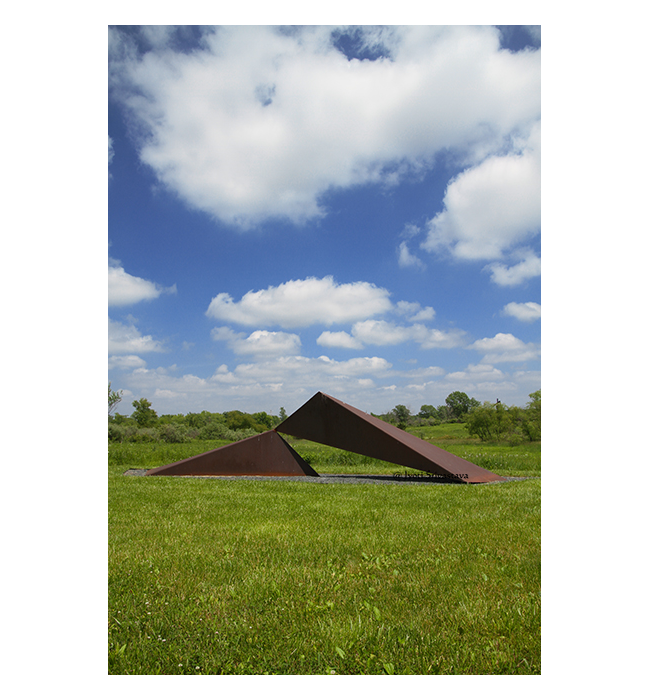 Purchased by the Governors State University Foundation,
with support from the National Endowment for the Arts. 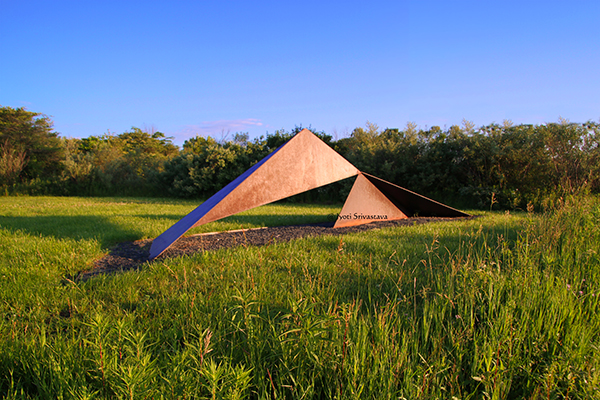 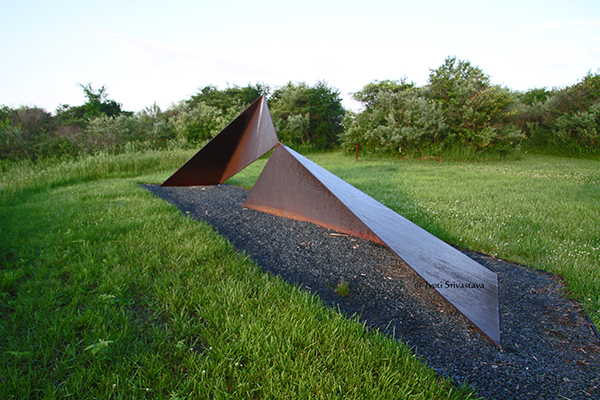 Icarus is one of a series of important works fabricated by Ginnever during the mid-1970s which use classical Greek sources for their titles.

In the myth of Daedalus and Icarus, the two are imprisoned on an island. Daedalus fashions two sets of wings from wax and feathers so they can begin to make their escape high above the Aegean Sea. Icarus enthralled by his newfound freedom and unwilling to acknowledge his vulnerability, ignores his father’s warnings and flies too close to the sun, melting the wax and plummeting to his death. The story is a cautionary tale highlighting humankind’s arrogance. It has been referenced many times by artists as varied as Pieter Brueghel, Peter Paul Rubens, and Chicago Imagist Roger Brown.

This artwork is deceptive in its simplicity. It is part of a series in which Ginnever deliberately challenged the dominance of 1970s Minimalism through dramatically angled compositions emphasizing an uneasy balance of visual and physical weight. The viewer’s experience of Icarus shifts continuously. From observing the two triangles relatively flat expanse of patinated steel balanced precariously one upon the other, the viewer can shift position slightly and suddenly catch the broad back of the work, noting an angle of intersection which feels uncomfortably delicate. Ginnever challenges us to “make sense” of his idiosyncratic geometry and in the process heightens our awareness of balance and form. 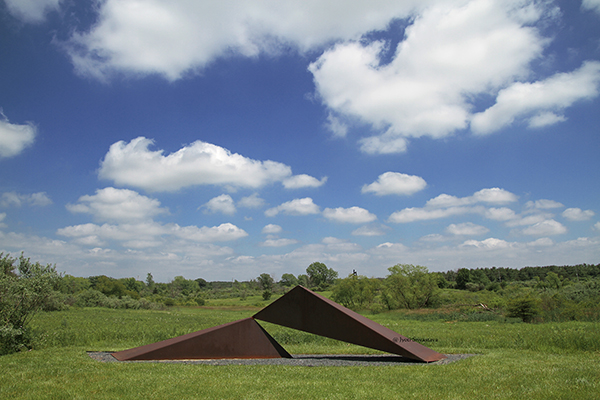 Ginnever is known primarily for large-scale abstract steel sculptures. His work is famous for providing multiple positions, giving the viewer a different perspective as one moves around the sculpture, retaining the balance of form from every direction.

Ginnever travelled throughout France and Italy in 1953-55, and absorbed as much as he could from the many museums he visited. Upon returning to his native California, he received a BFA from California School of Fine Arts in 1957. The year 1957 was a pivotal for Ginnever, when he drove with fellow sculptor Mark di Suvero from San Francisco to New York. On the week-long cross-country journey, Ginnever and di Suvero spent their time discussing abstract expressionism and concluded that sculpture “hadn’t matched the accomplishments in painting.” They were determined to correct that. Dropping di Suvero off in New York City, Ginnever continued on to Cornell University, where he had accepted a teaching position, and where he simultaneously completed his MFA in 1959.

Ginnever has received numerous awards and fellowships. In 1974 he got John Simon Guggenheim Fellowship. In 1975 he got the individual artist grant from the National Endowment for the Arts. In 1998, he got the Pollack-Krasner Foundation Grant. In 1999 he received the Lee Krasner Foundation Lifetime Achievement Award.

By the late 1970s, Ginnever was also among the first members of ConStruct, the artist-owned gallery that promoted and organized large-scale sculpture exhibitions throughout the United States. Other founding members included John Raymond Henry, Kenneth Snelson, Lyman Kipp and Mark di Suvero.

Ginnever continues to work on sculpture, drawings and printmaking, primarily at the studios on his sculpture farm in Putney, Vermont.