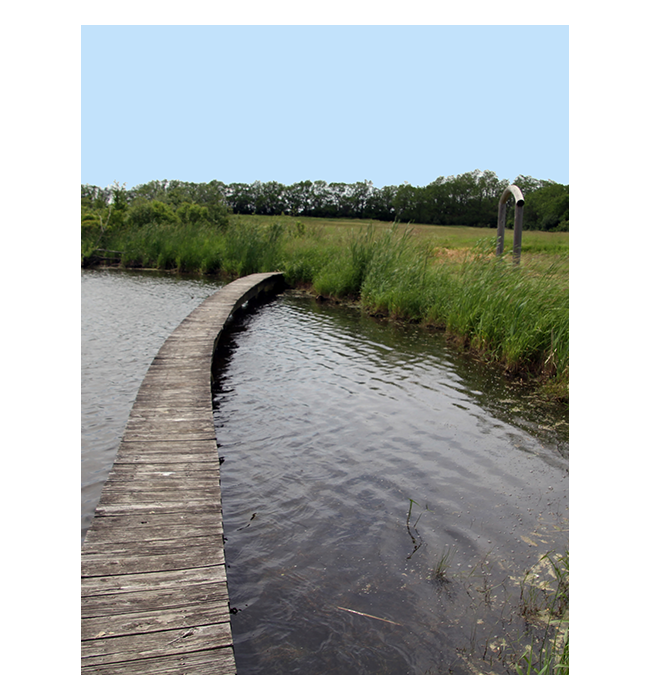 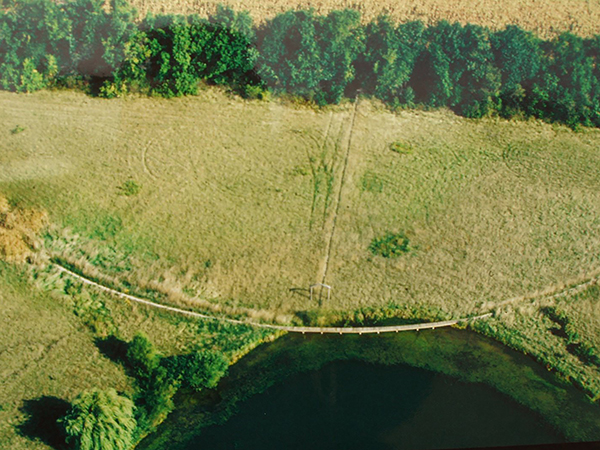 Aerial View of Bodark Arc – by Martin Puryear / It is an example of Land Art so large it can be fully appreciated only by viewing from the air.

Bodark Art is an example of Land Art.

Land Art, also known as Earth Art, or Environmental Art, is an art movement that emerged in the 1960s and 1970s. It expanded boundaries of art in two critical ways. One, in terms of by the materials used, and two, in terms of the siting of the works. The materials used were often the materials of the Earth, for instance the soil, rocks, water and vegetation, found on-site; and the siting of the works were often distant from population centers. Exponents of land art rejected the museum or gallery as the setting of artistic activity, and developed monumental landscape projects. The artists associated with land art, have usually been involved with Minimal Art and Conceptual Art. Though sometimes fairly inaccessible, photo documentation was commonly brought back to the urban art gallery. 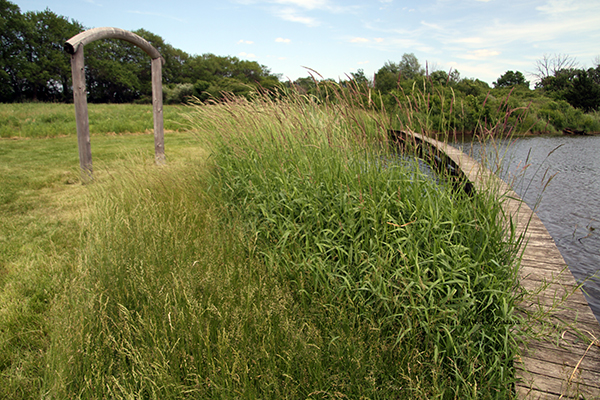 Bodark Arc – by Martin Puryear / The semi-circular asphalt path, which becomes wooden-bridge over water create the “curved limbs” of the bow.

Bodark Arc is in the shape of bow and arrow.
The two main components of bow are limbs and string.
The semi-circular asphalt path, which becomes wooden-bridge over water create the “curved limbs” of the bow.
To the north is a line of Osage orange trees. This arcade of trees forms the “string” of the bow.
Wooden gateway leads to a path that makes the “arrow.” 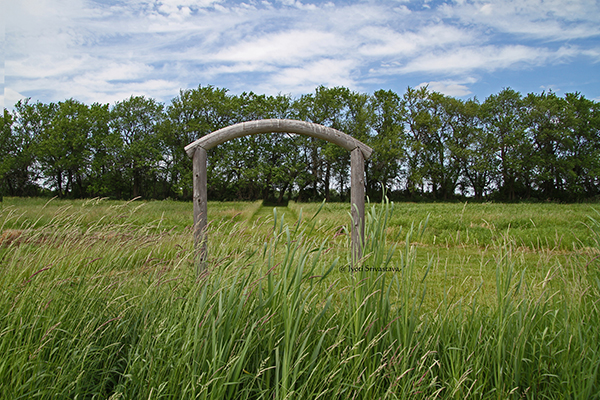 Bodark Arc – by Martin Puryear / To the north is a line of Osage orange trees. This arcade of trees forms the “string” of the bow. Wooden gateway leads to a path that makes the “arrow.” 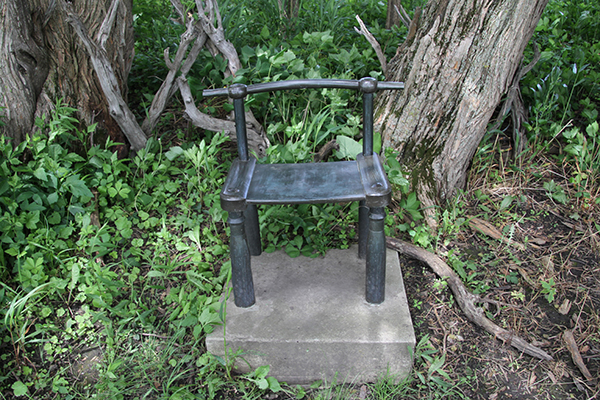 At the art-work’s mid-point is a bronze chair [modeled after African tribal design].

Sitting on the chair, one can see the arrow, and note that it is aimed at the doorway of the distant university building. 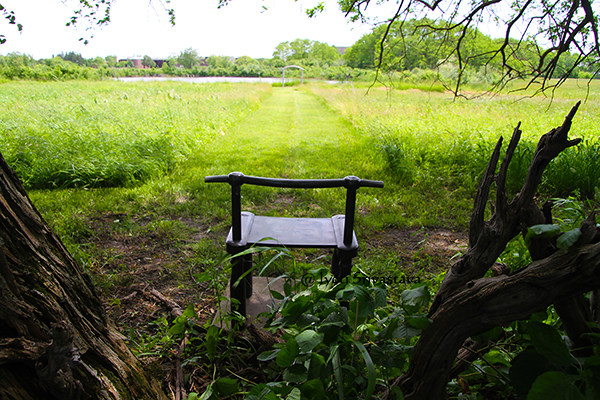 Bodark Arc – by Martin Puryear / Sitting on the chair, one can see the arrow, and note that it is aimed at the doorway of the distant university building.

The word Bodark is from the French bois d’arc meaning bow-wood. Anglo settlers shortened to ‘Bodark.’
Osage Orange trees grow durable wood, ideal for building bows.
So the term Bodrak refers to the line of Osage Orange trees, that make the string of the bow in this monumental land art.

Martin Puryear is known for his devotion to traditional craft. Working in wood, bronze, and other media, he creates modernist abstract works that are inspired by nature and draw on a range of cultures, histories and motifs. He has been selected to represent the United States at the 2019 Venice Biennale.

Throughout young adulthood, Puryear’s love for the natural world led him to study falconry, ornithology, and archery during high school while retaining his artistic interest. In 1963, he received his BA in Fine Art from Catholic University in Washington DC. After which he spent two years [1964-66] as a Peace Corps volunteer in Sierra Leone where he learned local woodworking techniques. After his time in Africa, Puryear moved to Stockholm to study printmaking at the Swedish Royal Academy of Arts [1966-1968]. Then he returned to the United States, and enrolled in the sculpture program at Yale University. He earned his MFA from Yale University in 1971, after which Puryear began teaching at Fisk University in Nashville, Tennessee, then at the University of Maryland. In 1973, when he also established a studio in Brooklyn, New York. In 1977 he completed his first major outdoor sculpture commission. Unfortunately this same year his Brooklyn studio burned down, and Puryear decided to move to Chicago.

Martin Puryear lived 12 constructive years in Chicago from 1978 to 1990. He served as Professor of Art at the University of Illinois, Chicago. In both 1979 and 1981, and again in 1989, his work was included in the Whitney Biennial at the Whitney Museum of American Art in New York City. He travelled to Japan in 1982 through a Guggenheim Memorial Foundation Fellowship where he investigated architecture and garden design. In 1989, he was awarded the MacArthur Foundation Fellowship.

In 1990 he moved back to New York state. In 2007, he received the Gold Medal in Sculpture by the American Academy of Arts and Letters, and in 2011 was awarded the National Medal of Arts. Puryear has lived in New York’s Hudson Valley, where he works in a studio of his own construction.

His work is widely exhibited and collected both in the United States and internationally. An important work by Puryear, “Bodark Arc is at the Nathan Manilow Sculpture Park.

In 2011, Puryear was awarded with the National Medal of the Arts for his contribution to America in history, culture and identity through sculpture. The award was presented by President Barack Obama on February 13, 2012, in a ceremony in the East Room of the White House in Washington D.C..

National Medal for the Arts.”A prestigious American honor, it is the highest honor given to artists and arts patrons by the United States government, for their outstanding contributions to the excellence, growth, support, and availability of the Arts in the country. Nominations are submitted to the National Council on the Arts, the advisory committee of the National Endowment for the Arts [NEA]. The award is presented by the President, in a ceremony at the White House.