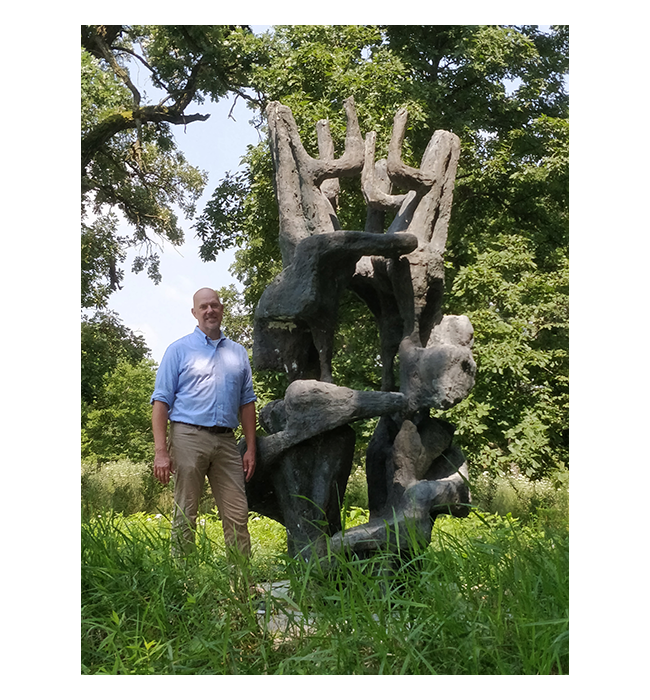 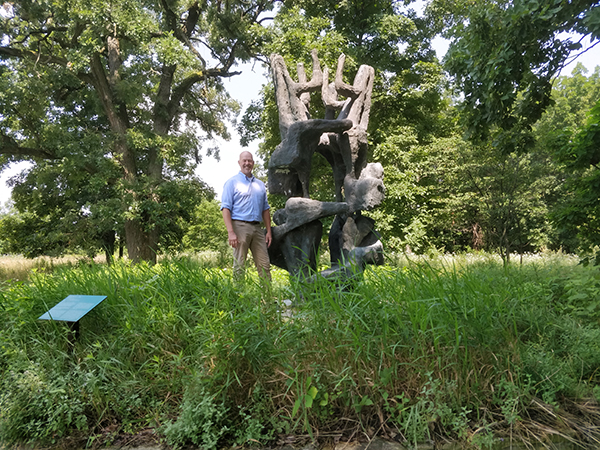 In 1954, Étienne Martin started the series of Demeures which made him famous. Demeure is French for dwelling, residence or house. Etienne Martin said that his inspiration came from his childhood memories of the large parental home, where he felt happy and secure.

In his “Demeure 4,” he added “Lanleff,” which refers to a temple in Brittany. It is associated with his childhood memories. Demeure 4 was created in 1961 in France.

In 2003, the Art Institute of Chicago gave “Lanleff-Demure No. 4” as a gift to the Nathan Manilow Sculpture Park. It has since been one of the 30 master works in the Park’s collection.

However, it is located in a remote area in the park, and over the years it has suffered damages.

“HOME IS WHERE ART IS” Campaign

Last year, an interesting development took place. Two students from Governors State University, Marie Schelfo and Nathan Couwenhoven, were wandering around campus, when they found this sculpture in a remote part of the campus. Captivated by it, they wanted to change the situation.  They a campaign “Home Is Where Art Is,” to restore the sculpture to its past glory, and relocate it in a more accessible public space. More about it later in the post.

From Wikipedia.. click here..
Etienne-Martin was born in Lyon in 1913 in Loriol, Drôme, France. He Martin attended the Ecole des Beaux Arts de Lyon from 1929 to 1933. He moved to Paris in 1934, working at the studio of Charles Malfray at the Académie Ranson.

He worked primarily in wood and plaster, creating works inspired by his childhood memories of his home in Loriol. Later sculpture included bronze, string, and textiles.

He received in 1966 the Grand Prize for Sculpture in the 33rd Venice Biennale. He was a professor and head of the sculpture department from 1968 to 1983 at the École nationale supérieure des Beaux-Arts in Paris. He was elected 1971 to the Académie des beaux-arts. In 1984 an exhibition bringing together all his Demeures was held at the Pompidou Center in Paris. In 2010, June to September, a new exhibition at the Pompidou Center, paid respect to the artist by showing fifteen sculptures, drawing, personal notebooks, and photographs of his studio. 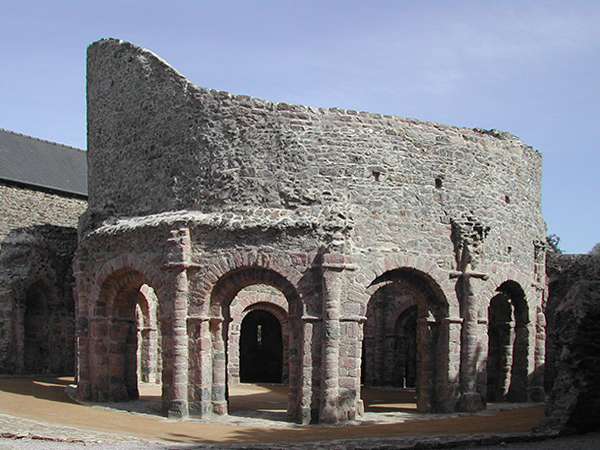 A quick Google search resulted in some interesting finds..
[1] “Lanleff Demeure 4” has a twin in Amsterdam, the Netherlands.
[2] More sculptures from his Demeure-Series are located in museums and sculpture gardens.
“Demeure 1” [1959] is in an outdoor sculpture museum in  Paris, France.
“Demeure 3” [1960] is in Quebec, Canada,
“Demeure 4” [1961] at Amsterdam, the Netherlands, and..
“Demeure 10” [1968] is also Paris, France.
[3] Demeure series made him famous. In 1966 he received Grand Prize in Sculpture at the 33th Venice Biennale.
[4] In 1984 an exhibition of all his Demeures was presented at the Center Pompidou in Paris, France.
[5] In 2011 (October 2011 to January 2012), the first retrospective of the artist was presented at the Museum of Fine Arts in Lyon, France. 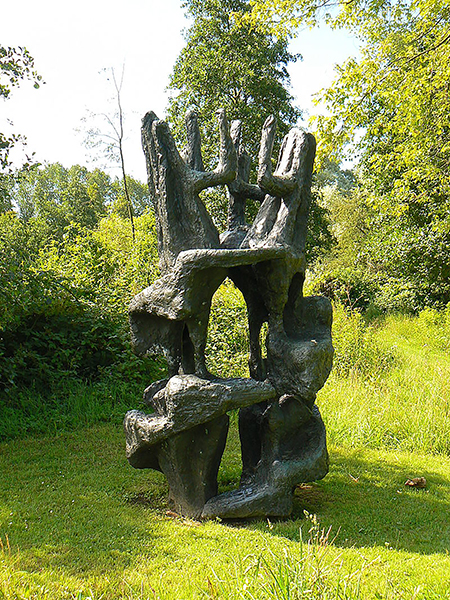 Demure 8 [1963] is also in the collection of Stedelijk Museum. 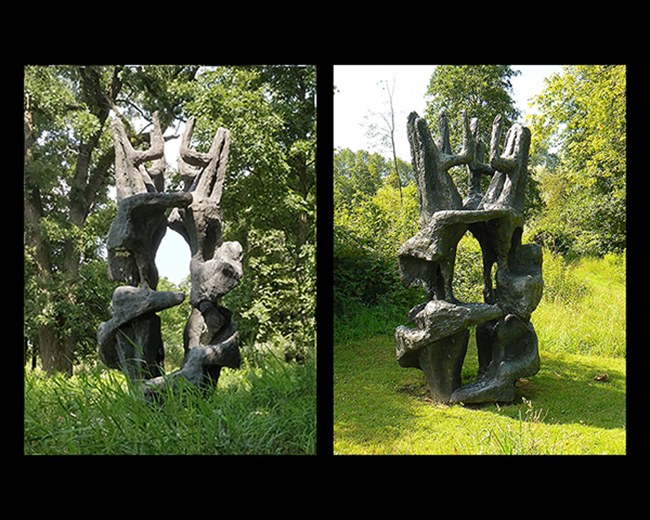 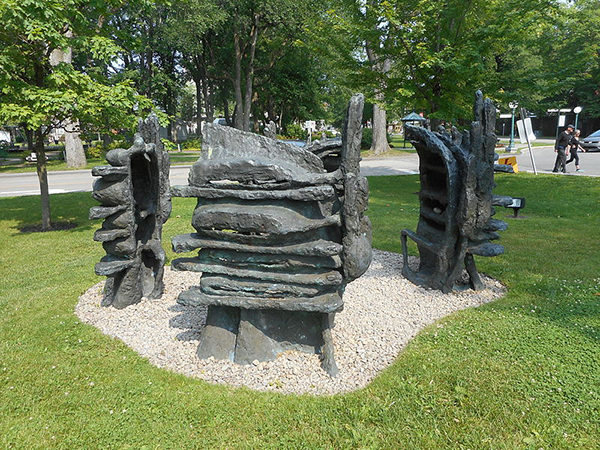 “Demeure 3” [1960] – a sculpture from Demure-series – is in the collection of the Musée national des beaux-arts du Québec, in Quebec, Canada. Demeure 3 is also at the Kröller-Müller Museum sculpture garden, in Otterlo in the Netherlands. 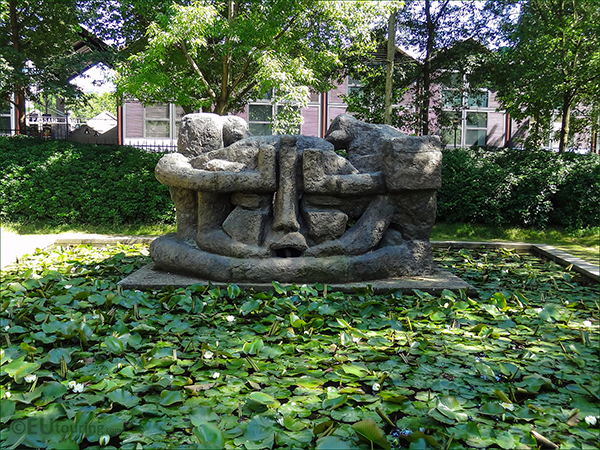 Another sculpture from Demure-Series, “Demure 10” [1968]  is located in a lily-pond in Parc de Bercy, Paris, France. 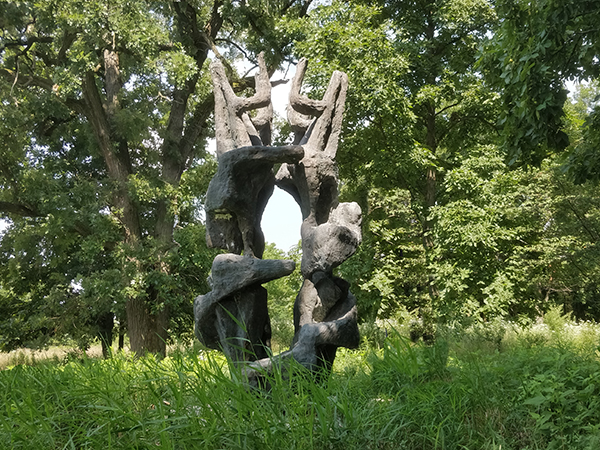 HOME IS WHERE ART IS  A student led campaign

Two GSU students Marie Schelfo and Nathan Couwenhoven, after finding this sculpture approached Jeff Stevenson, the Director and Curator of the Nathan Manilow Sculpture Park. Learning more about its history, they are even more committed to doing something about it. Stevenson told the students they would need to raise about $25,000 to move the sculpture to a more visible space, as well as to clean and restore it. The students have started a “Home Is Where Art Is” campaign to restore and relocate the sculpture. With the help of GSU film student Peter Cummings, they created a YouTube video and a GoFundMe campaign with the hope of raising the money. Here is the link.. click here..
Hopefully soon Chicago’s Demure will be in a beautiful spot where more people can enjoy its beauty!

he Nathan Manilow Sculpture Park is a collection of 30 master works of large-scale sculpture situated within 100 acres of prairie landscape. This “museum-in-the-prairie” is open for public viewing 365 days a year and is free of charge. The Park provides programs for adults and children that integrate art and nature. Although it is located on the campus of Governors State University, it was founded and is maintained through grants and donations from businesses and individuals.