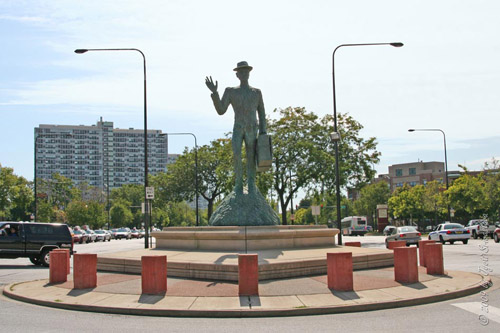 Above Image: Monument to the Great Northern Migration – by Alison Saar

Funded by the Metropolitan Pier and Exposition Authority.

It allotted $10 million to rehabilitate King Drive. The allotment included $500,000 for a design element
that would later become known as the Public Art of Bronzeville.

The King Drive Gateway Project was part of the ongoing program to rejuvenate the Bronzeville area. It stretches along the 1.5 mile of King Drive from 24th Street to 35th street.

Bronzeville is a jewel of the Chicago south side, and said to be second only to Harlem, in providing a legacy of cultural gifts to America and the world.  The area grew during the “Great Migration” of the 1910-1920, when black population from the southern United States migrated into the area to work in Chicago’s rapidly expanding industrial sector.  By 1990s,  31 percent of its population of this area, lived with household incomes below $10,000.

In the 1996 dedication ceremony, Mayor Richard M. Daley said..  “The King Drive gateway project is the keystone of an ongoing program to rejuvenate the Bronzeville Area.” The King Drive project was part of nearly ten years of building, renovation, and restoration involving more than $100 million in public funds invested to build cultural facilities and public art all located in the south side Chicago. The project had representatives from the community in the advisory committee, and also included artists from the area. The King Drive Gateway project is said to be instrumental in the designation of Chicago Landmark status to the Black Metropolis District in September 9, 1998. The post is about the Public Art works created as part of the project. 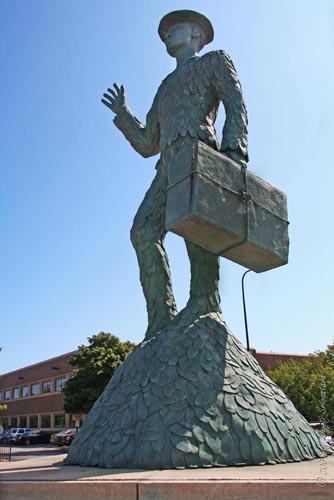 Monument to the Great Northern Migration – by Alison Saar

Los Angeles’ Alison Saar’s 15 foot bronze statue is a testament to the thousands of African Americans who migrated to Chicago in the early 20th century in search of greater freedom and opportunity. The traveler’s hand is raised in salutation to his new home. His other hand carries a worn suitcase symbolic of his journey, dreams and talents. The bollards surrounding the monument are also suitcases that are textured with a pattern derived from the tin ceilings of the era. The figure is oriented to the north symbolizing the traveler’s destination. 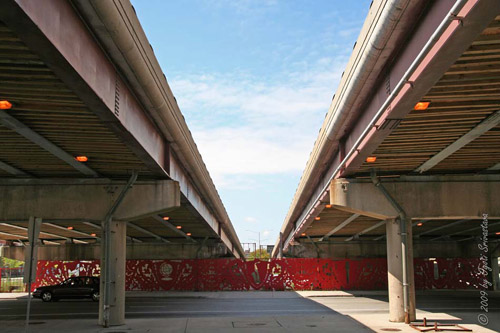 Mary Brogger’s design for The Recognition panels is based on a motif found in the stone relief carvings atop the Victory Monument. The pattern consists of a shield surrounded by a decorative acanthus vine with various icons commemorating aspects of Bronzeville’s legacy. 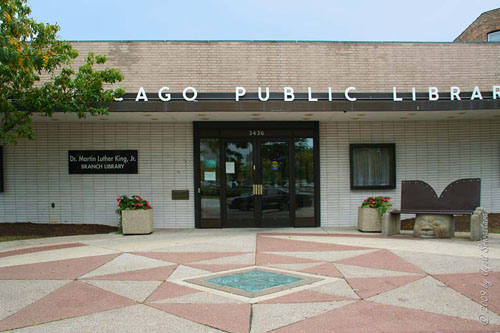 Designed by Geraldine McCullough from Oak Park, Chicago, the Bronzeville Walk of Fame has 91 bronze diamond-shaped plaques embedded in the street, on sidewalks, medians and crosswalks, and at Dr. Martin Luther King, Jr. Branch Library. These commemorate more than 104 current and former Bronzeville residents. 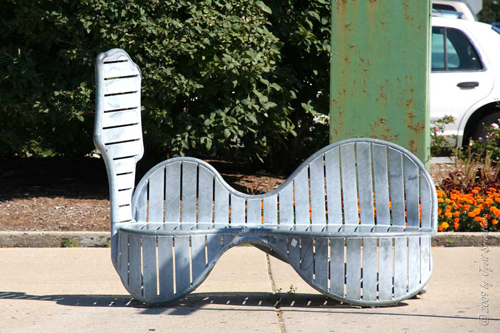 14 artists [of which 9 from greater Chicago area] created 22 decorative park benches. Of these two artists were African American: Apache Wakefield and Kymberli Johnson. The benches celebrate Bronzeville’s unique history and achievements including its local architecture, its musical legacy, the message of Dr. King and the Civil Rights Movement, the community’s African heritage and the promise of local youth. 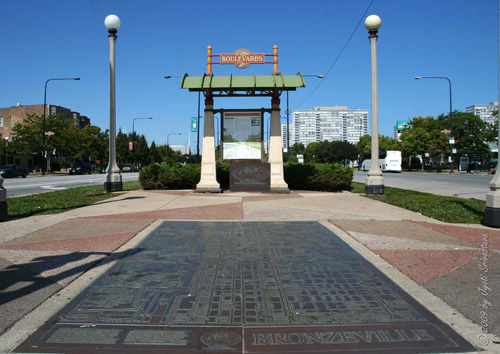 Historic Bronzeville Map was designed by Gregg leFevre from upstate New York. It is a 14 foot by 17 foot bronze slab inset in the King Drive median at 35th Street. It highlights landmarks, historic buildings and places of significance from 19th and 20th centuries including “the Stroll”, an entertainment district along the south side and the 9 landmarked buildings that comprise the Black Metropolitan / Bronzeville Historic District. Inset in the map are relief artifacts including records, sheet music, instruments, and club banners recalling famous people, historic sites, and events in Bronzeville. The naming of the map “Bronzeville” instead of “Black Metropolis” led to the area’s official adoption of the name “Bronzeville.” 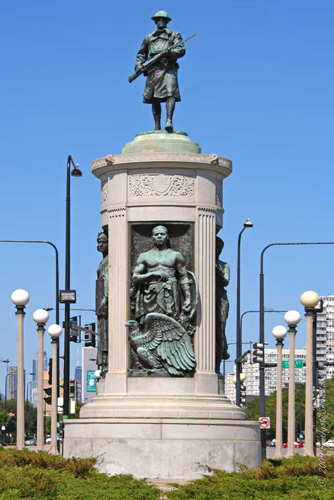 Located on the King Drive just south of 35th Street. This structure was erected to honor the achievements of the Eighth Regiment of the Illinois National Guard, an African-American unit that served in France during World War I as part of the 370th U.S. Infantry. The bronze sculpture was made by Leonard Crunelle. He was born in France in a coal-mining town that was destroyed in World War I. He was a student of noted Chicago sculptor Lorado Taft. The granite column and architectural setting of the monument were a collaborative design of Crunelle and John Nyden, a Chicago architect.

The King Drive Restoration Project / Public Art in Bronzeville was dedicated in 1996, in conjunction with the Democratic National Convention in Chicago, in which President Bill Clinton and Vice President Al Gore were nominated for reelection.

This was not a Percent-for-Art program. This was to be a community-based public art project. The Chicago Percent for Art program, created by municipal ordinance in 1978, required 1 percent (now 1.33 percent) of the construction cost of public buildings to be budgeted for the purchase of artwork. However, the ordinance did not apply to transportation infrastructure or street beautification projects like the King Drive Project.

A 15 member Selection Committee was formed. It included nine community representatives, two art representatives and four city government representatives. Plus Barbara Koenen – project coordinator – who worked for the Public Art program. The committee made decisions regarding the content of art projects and the selection of artists

Among the nine community representatives in the Selection Committee, two were involved in drafting the Mid-South Plan : Jeff Johnson, property manager at Prairie Shores Apartments [located on King Drive], and Susan Campbell, from Wendell Campbell Associates [the black-owned architectural firm that wrote the strategic plan and ultimately designed the streetscape project]. Among other committee members were local residents, members of the Gap Neighborhood Association, (which had won historic landmark designation for its residential homes); the principal of Dunbar Vocational High School also located on King Drive; the librarian for the Martin Luther King Branch Library; and Kerry James Marshall, a African American painter and MacArthur “genius award” winner whose studio was located on Indiana Avenue, a street that runs parallel to King Drive in Bronzeville.

The primary involvement by the community representatives in the Selection Committee was the identification of the types of art and artists to be included in the project and their approval of artists’ proposals. One important discussion was the name to be put on the 14 foot by 17 foot bronze map of the area. The debate was between “Black Metropolis” or “Bronzeville.” The  name “Bronzeville” was approved through an extensive advocacy effort led by community activists Harold Lucas and Paula Robinson. The naming of the map “Bronzeville” instead of “Black Metropolis” led to the area’s official adoption of the name “Bronzeville.”

The Selection Committee also played an important role in who was to be featured on the Walk of Fame. It solicited nominations from the community at large, compiled a list of recommended honorees, and made the final selections. Although an African American graduate student in history identified by the committee was employed as a consultant, there was no systematic historical research done to inform the selection process.

King Drive Gateway Project was funded by Metropolitan Pier and Exposition Authority [MPEA] What’s MEPA??..  For it’s website..  click here.. The Metropolitan Pier and Exposition Authority (MPEA) is a municipal corporation created by the Illinois General Assembly. Its Board of Directors is appointed by the Governor of Illinois and the Mayor of Chicago. The Chairman is selected by the MPEA Board. The MPEA’s mission is to attract trade shows, conventions, meetings, expositions and public events to the City of Chicago, and in the process, strengthen the economy of the area.  The MPEA owns two world-class facilities: McCormick Place and Historic Navy Pier The Authority also owns the 1,262-room Hyatt Regency McCormick Place, a Four Diamond, AAA-rated hotel, located on the McCormick Place campus providing on-site convenience for all McCormick Place visitors.

Reference: Territorial Markers: “A Case Study of the Public Art of Bronzeville” by Diane Grams.
Diane Grams was a senior researcher at the Cultural Policy Center at University of Chicago, teaches graduate courses in cultural policy and research methods at the Harris School of Public Policy Studies…  click here.. 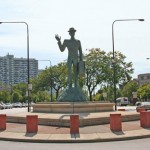 Monument to the Great Northern Migration – by Alison Saar 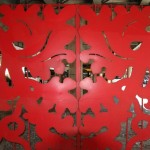 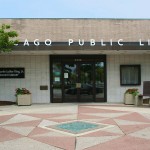 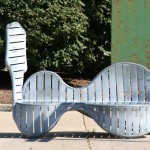 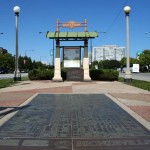 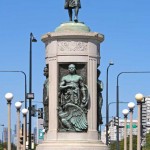