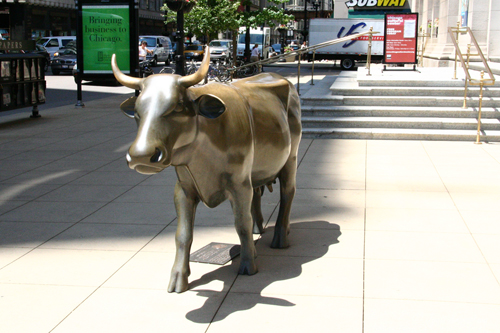 In the year 1999, Chicago had a very successful and in many ways a trend-setting exhibition, “Cows on Parade”. It featured about 300 life-size fiber-glass cows, hand-painted by local artists, displayed in public spaces throughout the city of Chicago. After the exhibition was over, the Cow Parade cows are auctioned off, and the money was donated to different charities. The immensely popular display attracted about 2 million visitors to Chicago,  and charity auction of the cows raised more than $3.4 million.

After making its American debut in Chicago, the “Cow on Parade” cows quickly spread to more than 75 cities around the world. During its 15 year run, it is estimated that over 5,000 cows have been created, and over 250 million people around the world have seen one of the parade cows. The various exhibitions have raised more than $30 million for charitable organizations around the world. Over 10,000 artists worldwide have participated in Cow Parade – professional and amateur, famous and emerging, young and old. The idea has been taken up by other cities which have chosen themes for similar public art projects with painted fiberglass sculptures which were later auctioned off and money donated to charities.

The concept of “Cows on parade” had its origins in Zürich, Switzerland, in 1998 by artistic director Walter Knapp. It was based on a similar idea lions on display the same city for the first time in 1986. The Zürich exhibit 1998 painted fiberglass cow exhibition was not called “cows on parade”, but was called “Land in Sicht” [roughly translated as “Countryside in view”]. The concept was brought to the United States when local Chicago businessman Peter Hanig, along with Commissioner of Cultural Affairs Lois Weisberg, organized an event in Chicago in 1999.  Michael Lash was Director of Public Art for the city of Chicago and Nathan Mason was curator for the exhibition. What’s the relation between Chicago and cows? Folklore has it that the Great Chicago Fire of 1871, was caused by Mrs. O’Leary’s cow. It destroyed a large portion of the town, but the city was able to rebuild and grow. Other relation being that from the Civil War until the 1920s Chicago was the country’s largest meatpacking center and was acknowledged as the headquarters of the industry. As Frank Sinatra sang in his famous “My Kind of Town, Chicago is”… “The union stockyard, Chicago is”… 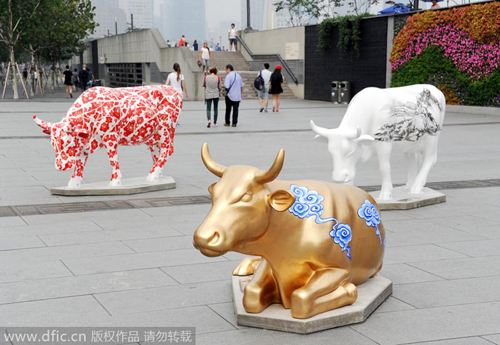 In the year 1999, Chicago had a very successful and in many ways a trend-setting exhibition, “Cows on Parade”. It featured about 300 life-size fiber-glass cows, hand-painted by local artists, displayed in public spaces throughout the city of Chicago. After the exhibition was over, the Cow Parade cows are auctioned off, and the money was donated to different charities. The immensely popular display attracted about 2 million visitors to Chicago, and charity auction of the cows raised more than $3.4 million.

After making its American debut in Chicago, the “Cow on Parade” cows quickly spread to more than 75 cities around the world. click here..

Cows on Parade, inspired exhibitions on similar themes.
The idea is simple..
[1] Fiberglass sculptures are decorated by local artists, sponsored by local businesses.
[2] These are exhibited in public places such as important streets, parks and local avenues around the city for a few months.
[3] After the exhibition is over, the statues are auctioned off and proceeds donated to charities.

This year [2014], in my two mini-vacations: one to Austin, Texas and the other to UK, I saw spin-offs of Cow Parade. In Austin I saw few fiberglass guitar sculptures from the 2007 exhibition, “Austin GuitarTown Public Art Project”. In Liverpool, UK I saw Superlambanana, from their 2008 exhibition. 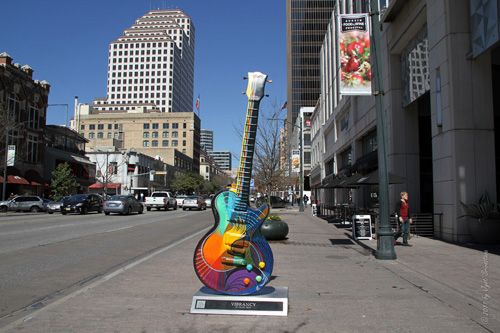 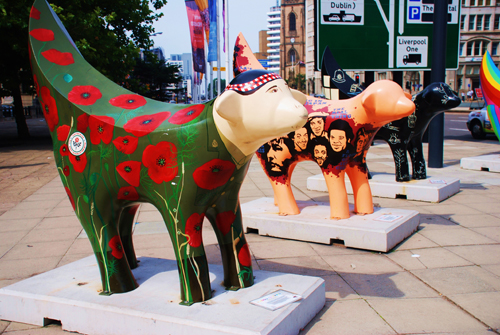 When I was in Liverpool, UK, the Superlambanana [Super Lamb Banana] caught my eyes. These were part of celebration of Liverpool being elected as the European “Capital of Culture” in 2008. The Superlambanana was designed by Manhattan-based Japanese artist Taro Chiezo. The sculpture is a comment on the dangers of genetic engineering and is heavily influenced by the history of Liverpool: historically both sheep and bananas were common cargos in the Liverpool’s docks. Chiezo himself only created a four-inch model; the full-size replica was made by four local artists: Andy Small, Julian Taylor, Tommy Reason and Ray Stokes. They created 125 replicas of Superlambanana to decorate and revitalize cultural and social events. In 2008, The Go Superlambananas! art exhibition was developed by the Liverpool Culture Company (LCC), led by its Creative Director Phil Redmond, in partnership with the Wild In Art. Each of these acted as a blank slate, on which various groups throughout the city could develop and design their own cultural contribution the city’s celebrations. For more, click here.. 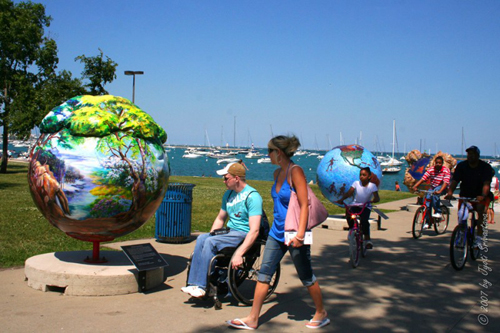 The exhibit featured over 100 sculpted globes, each five feet in diameter, displayed along Chicago’s lakefront from The Field Museum north and at Navy Pier. Artists from around the world, including Jim Dine, Yair Engel, Tom Van Sant and Juame Plensa, designed the globes, using a variety of materials to transform their plain white sphere to create awareness and provoke discussion about potential solutions to global warming. For more, click here.. 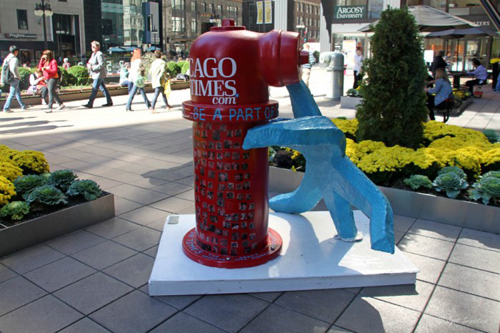 This citywide public art installation featured oversized replicas of Chicago’s iconic standard fire hydrants designed, painted, decorated and/or dressed by local artists. These colorful sculptures are be placed throughout the City in tribute to the work and heroism of our beloved Chicago Firefighters. At the conclusion of the exhibition, the hydrants were auctioned, with net proceeds benefiting charities that support the families of fire victims and other fire safety programs. For more, click here.. 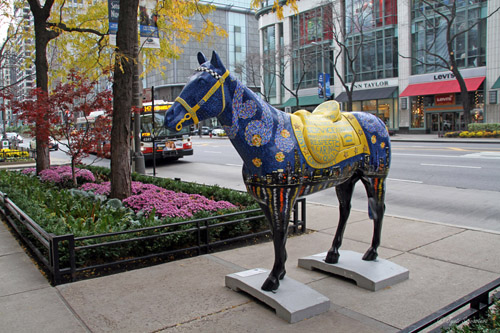 Since 1853, over 500 Chicago Police officers have sacrificed their lives to protect our city. In honor of those who we have lost, Wintrust partnered with the Chicago Police Memorial Foundation for a public art installation to benefit our fallen heroes. Designed to resemble Chicago’s Mounted Patrol Unit horses, the Horses of Honor stand for providing support and assistance to the families of those men and women who have been killed or catastrophically injured in the line of duty. For more, click here..