EXPO 2015: In/ Situ, In/Situ Outside, Expo Projects and Additional Artworks beyond Navy Pier. 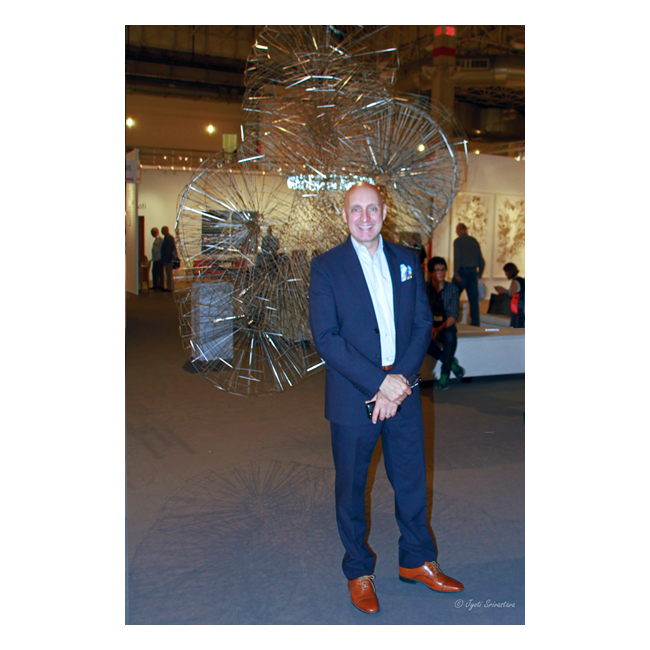 Above Image: Tony Karman [President / Director of  EXPO CHICAGO;  in front of “Freefall” by Antony Gromley].

The EXPO Chicago is organized under the leadership of President and Director Tony Karman, and is generously supported of Chicago’s civic and cultural leaders, museums, art dealers, curators, collectors, artists and institutions who join the Expo Chicago  to welcome the world, for a four day event at the Exhibition Hall of Navy Pier, Chicago. There are supporting activities and exhibitions in other parts of the city as well. 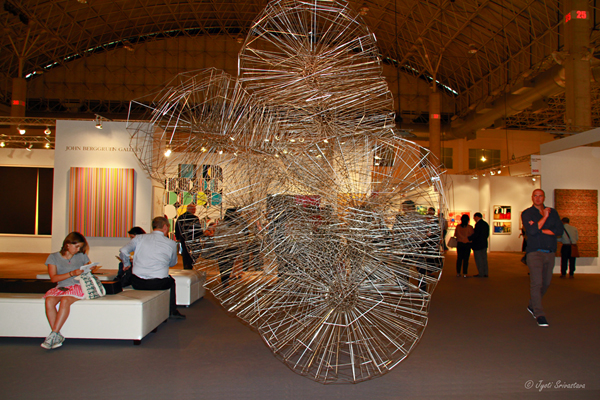 At every art fair, there are few art pieces that instantly resonate with the viewers, arousing their curiosity and making them stop to take a note. In EXPO 2015, Antony Gormley’s “Freefall” was one such piece. I noticed that many people stopped by this piece wondering what it was? It didn’t look like a typical Gromley’s abstract figural sculpture. Interestingly it was figural in a way, and in another way not so. The sculpture reveals the space where the body was, rather than represent the body itself. It represents an empty body-space at its core. The piece is made of stainless steel, and the dimensions are 114 3/16 x 72 13/16 x 70 7/8 inches. It was part of In-Situ exhibits.

Every year when I visit Expo Chicago, I pay special attention to work of art that are site-specific, or the “In/Situ” exhibits. This year, these were suspended from the ceiling of the Festival Hall, hovering above our head, strategically placed throughout the exposition space. It was in accordance with theme for 2015 IN/SITU exhibition: “Suspended: Parceling the Sky”. It featured works that were inspired by light, climate and atmospheric conditions. IN/SITU, is curated by Executive Director of The Contemporary Austin, Louis Grachos.

This post focuses on IN/SITU, IN/SITU Outside and EXPO Projects. It also brings out additional artworks beyond Navy Pier, which EXPO Chicago brings in collaboration of Chicago Park District [CPD] and Chicago Department of Cultural Affairs and Special Events [DCASE].

“This year’s program explores work that relates to the subject matter of Anish Kapoor’s Cloud Gate reflected from the iconic piece of work’s chrome surface—the clouds, stars, sky and our atmosphere itself,” said Louis Grachos, curator of IN/SITU. “Within this aerial format, the large-scale work chosen evokes a certain celestial consciousness that confounds the expansive sky-scape above with the frenetic energy of the exposition below. Through the selection of primarily suspended works, I am thrilled to be including some of the greatest artists working today, and with the encouragement of the exposition, looking forward to setting a new model of hanging artworks”. 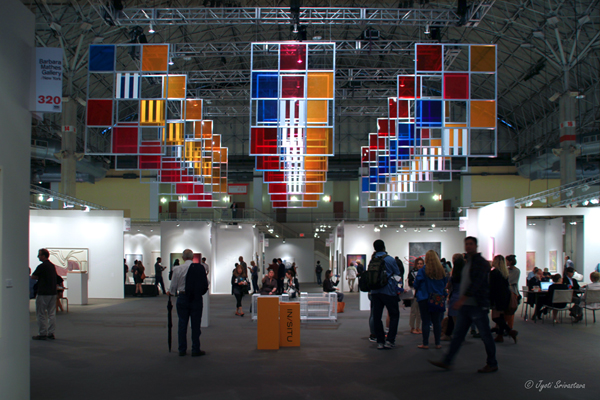 Arguable one of the most striking exhibits was “From three windows – 5 Colours for 252 places”. It was first presented and conceived for the upper galleries at the Museum of Modern Art Oxford in 2006; and was re-configured especially IN/SITU at EXPO Chicago, 2015. The artist Daniel Buren used three large windows located at one end of the museum as a template for a sequence of eighteen rectangular panels with each one suspended from the ceiling. Each panel is subdivided into twelve transparent Perspex squares, both clear and colored. The work engages the viewer in a visual and physical dialogue with space. 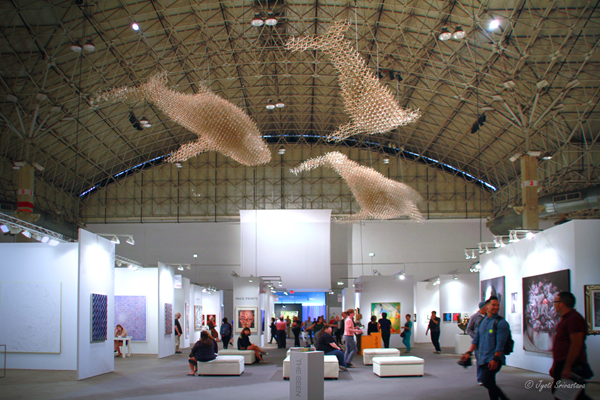 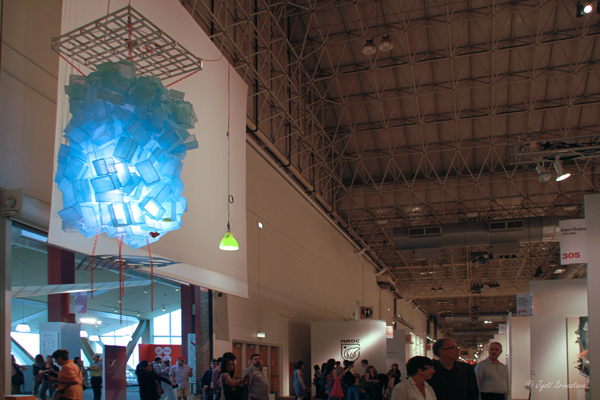 Jessica Stockholder’s “Celestial Season” sculptural installation was a luminous “cloud,” composed of translucent plastic baskets. At once warm and cool, like a breeze on a summer day, the piece stood at odds with the formality of the art fair space, and encouraged audience to interact with it, and spend time with it as a reprieve from the regimental booth layouts.

Selected by EXPO CHICAGO, EXPO Projects featured additional large-scale installations, site-specific and performative work on display in and around the exposition. 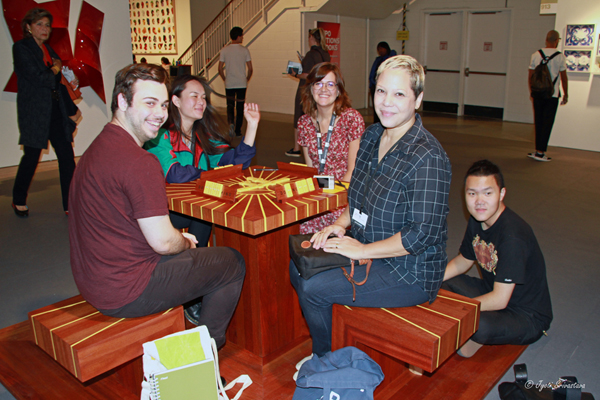 One of the very popular Expo Projects was DOMINODOMINO  by Dan Sullivan and Edra Soto. It featured meticulously crafted jatoba wood table with corian inlay. The piece was inspired by the cement domino table common in Puerto Rico. In the above image we see artist Edra Soto [sitting on right side bench] , playing with visitors of the exhibition. 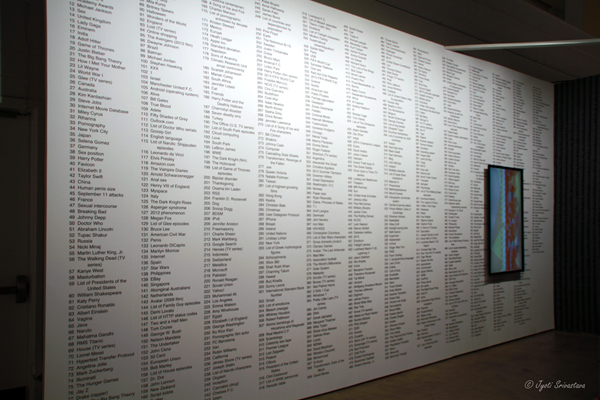 Personally, I found The Master Index [Semaphore], 2015 by Jason Salavon, a very interesting project. It listed every English wikipedia article by popularity. Jason Salavon composed this massive digitallist in collaboration with researchers at the University of Chicago. 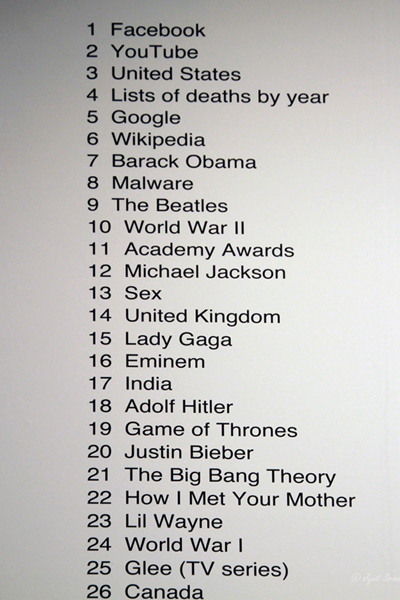 Another interesting Expo Project was Hank Willis Thomas’s traveling project “In Search of the Truth” [Truth Booth],  which made its stop on a world-wide tour at Expo Chicago. The installation was located outside on the east plaza of Navy Pier. It welcomed guests inside the inflatable structure to finish the statement: “The Truth is…”. The answers were filmed and will be compiled into video artwork that will be tracked, edited, discussed and displayed as the Truth Booth continues to travel around the world.

The Expo Chicago also featured outdoor section of In/Situ installations. Inaugurated in 2014, IN/SITU Outside provides the opportunity for EXPO CHICAGO exhibitors to present temporary public art installations situated along the Lakefront and throughout Chicago neighborhoods. In/Situ Outside is presented in partnership with the Chicago Park District [CPD] and Department of Cultural Affairs and Special Events [DCASE].

“As the fair continues to mature, so does the depth of our programming and the legacy of working with noted international curators,” said EXPO CHICAGO President Director Tony Karman. “This year, we move from soaring architectural structures over the show floor to establishing a new precedent featuring large-scale suspended works as a part of IN/SITU. We are adding several public works to Chicago’s lakefront as a part of our IN/SITU Outside initiative, and we are presenting installations by major international artists as a part of EXPO Projects”.

“I am extremely proud of the Chicago Park District’s long history of hosting internationally renowned sculptures and artwork throughout Chicago’s parks,” said General Superintendent / CEO of the Chicago Park District Michael P. Kelly. “Working closely with EXPO CHICAGO and the IN/SITU Outside program has allowed the District to expand its partnerships with world renowned artists and galleries, furthering our reputation and commitment to providing Chicago’s citizens and visitors access to great public art.” 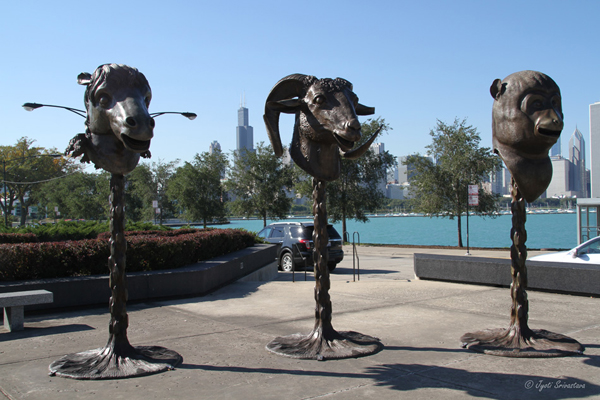 I personally feel that this was the best EXPO CHICAGO yet!!!

Thank You President / Director of EXPO CHICAGO Tony Karman,
for bringing this world class event to Chicago, and all the effort in making this event such a huge success.