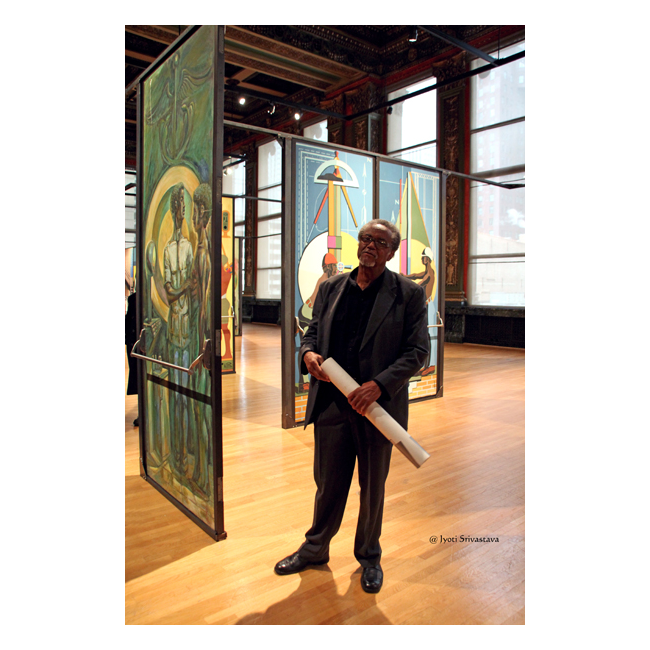 This exhibition presents all 32 doors painted by Eugene Eda for the stairwells of the original, now demolished Malcolm X College.
Painted in 1971,  the monumental doors are a landmark of the Black Arts movement in Chicago. 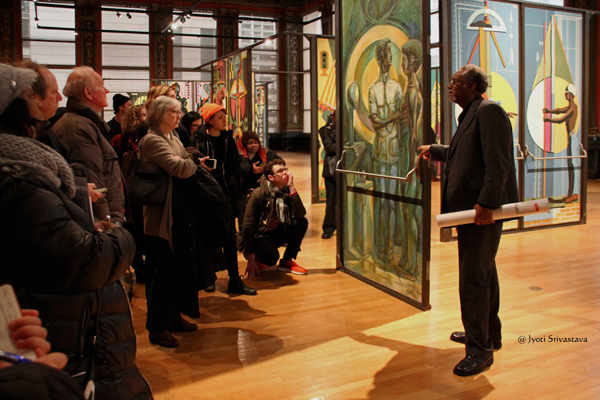 The exhibition “Eugene Eda’s Doors for Malcolm X College” is part of DCASE celebrating the 2017 as the Year of Public Art. The exhibition highlights several aspects of Public Art. Mural painting is an important form of Public Art, and  often give an insight into the socio-cultural aspects of our history.  The challenges facing Public Art is not only about creation of new art pieces, but of maintaing the existing ones, and often about salvaging them during demolition.

But inside the building there was ornamentation, in the form of 32 stunning mural doors. Painted by Eugene “Eda” Wade the mural doors reflected the Black Power movement of the 1960s and 70s. The brightly colored murals not only enlivened the functional college space, but also served the political, social and educational needs of the students. These murals were one of the most outstanding features of the building.

In 2012 when the plan to demolish the building was announced, some preservationist who understood the cultural significance of the murals, took the challenge of saving the doors from demolition. With the efforts of people like Michelle Perkins, a member of the Malcolm X art faculty, and others, the doors have been saved.

The entire collection of 32-doors are now being exhibited at the Sidney Yates Gallery at Chicago Cultural Center – free and open for all to enjoy. The “hidden gem” that was hitherto seen only by the staff and students of the college, is now open to the public in the People’s Palace. 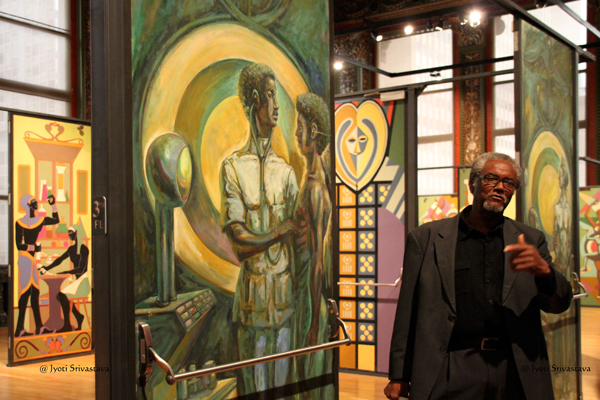 Eugene “Eda” Wade giving Gallery Talk at the exhibition of his mural-doors for Malcolm X College at Chicago Cultural Center.

April 24, 2017,  I attended the Opening Reception of the  exhibition featuring salvaged mural doors of the now demolished Malcolm X College.

I have always believed that an exhibiton, or a peice of art, has to be aesthetically appealing, to create an interest in learning more about the art and the artist. The murals are amazing, and the presentation is engaging, giving the viwers an opportunity to observe every single piece closely, and to move about freely through the exhibit space.

The opening day featured Gallery Talk  by none other than the painter himself Eugene “Eda” Wade. He talked about the Black Arts Movement in general, and his paintings in particular.

Eugene “Eda” Wade – painter, printmaker, sculptor and muralist – was born in Baton Rouge, Louisiana. He received BS in art education from Southern University in 1964 and MFA from Howard University, Washington D.C. in 1971. He was an art professor at Kennedy City College from 1979 until his retirement in 2005. After which he moved back to Louisiana where he now teaches at the Southern University.

Wade was one of the nation’s pioneers of the community mural movement. He frequently painted with William “Bill” Walker, with whom he helped found the Chicago Mural Group in the 1960s.  Now it is known as  the Chicago Public Art Group.

In early 1971, Wade, along with William Walker, and two other artists, took part in in an exhibition at the Museum of Contemporary Art Chicago titled “Murals for the People.”  Malcolm X College had just opened in 1971.  At the behest of the College President Dr. Charles G. Hurst, Jr.,  the campus project coordinator Rosa C. Moore approached Eda to  paint the inner staircase doors, “so they wound’t look like solid black prison doors.”

The college was borne of the Black Power Movement of the late 1960s, that began following the assassination on Malcolm X. The mural doors reflect the Black Aesthetics Movement [BAM]  which was the cultural wing of the Black Power Movement.  In the words of the noted theoretician Larry Neal,  the BAM was “concerned with artistic responsibility, employing an aesthetic derived from Black experience.”  Eda’s murals explore the African American cultural and historical experience.  Along with images related to the various departments [like architecture, engineering, athleitcs], many of the murals depict the links between ancestral heritage  – expressed thorugh ancient Egyptian and West African figures – and the urban present. The doors are reminders to the students to learn from the past while progressing forward.

Wade also painted in the Wall of Respect that received national critical acclaim when it was unveiled in 1967.
Here is an excerpt from his Gallery Talk …
We tried to paint in “every community and some of the most depressed getto type area trying to beautyfy, trying to have all type of people to relate to it. We felt good about it. We wern’t making any money. We were begging for supplies and materials from business people. Sometimes people would contribute to it. But in terms of artists being paid at that time, we were not being paid…. We painted with love and gusto. And we hoped that something good would come out of it.” 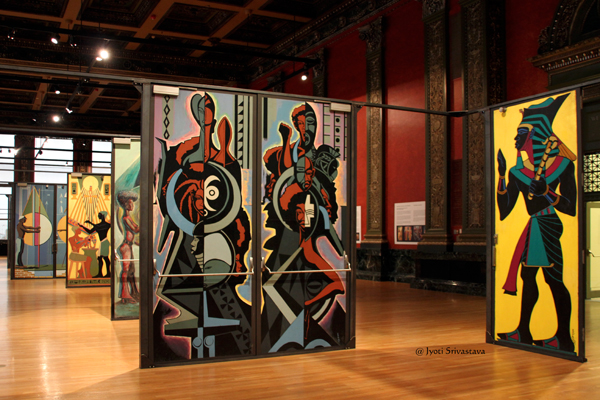 A total of 16 sets of doors [32 in all] were painted for the college’s four main sets of stairwell entries that led to classrooms, offices, lecture halls and labs. Each stairwell served three floors plus a basement level.

In the exhibition, there are four pavilions, and each of these hold four pairs of doors progressing from Floor 1 to Floor 3 and finally the basement level at the eastern end of the gallery. Two sets are presented as open and two sets are presented as closed. The doors for each of the four stairwells opening designated A,B,C and D in the original building have their own stylistic characteristics.

Stair A: Draws ancient Egyptian art and symbols.
Stair B: Uses symbols, patterns and motifs drawn from the arts of West Africa.
Stair C: Features a hybrid of fugurations with modernist abstraction
Stair D: Doors are painted in a more naturalistic style. 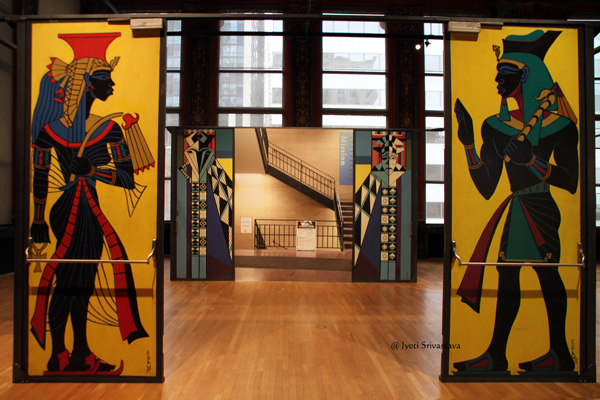 He All of the mural doors located on the four floors of the main entrance of the building include reference to the ancient Egypt, the northeast corner of Africa, called the “Cradle of Civilization.” The murals depict musicians, scholars, medical and funerary practices, pharaohs and female rulers. There are also Egyptian hieroglyphs, which is among the old writing system in the world. 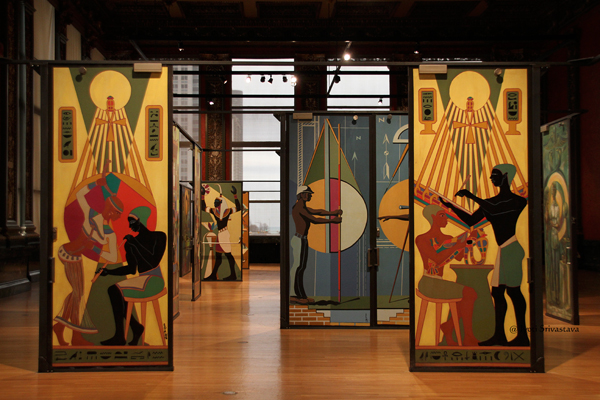 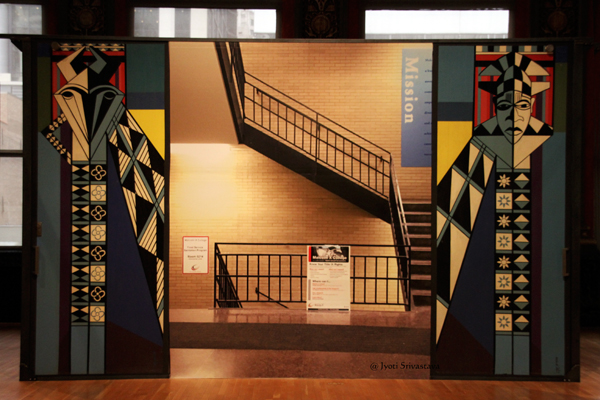 Stairwell B – West African and symbolisms

The doors of stairwell B are full of symbolisms. They contain figurative representation of male and female through the use of African masks, such as Nigerian Queen Pendant Mask at the top of first floor door.  They also include popular Adinkra symbols that evolved in Ghana, West Africa,  as part of Ashanti culture. The doors are reminders to the students to learn from the past while progressing forward. 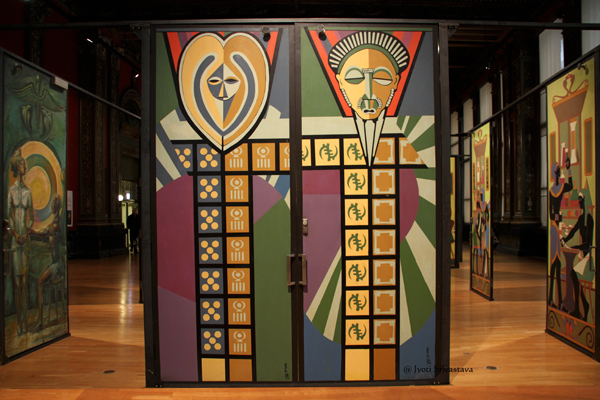 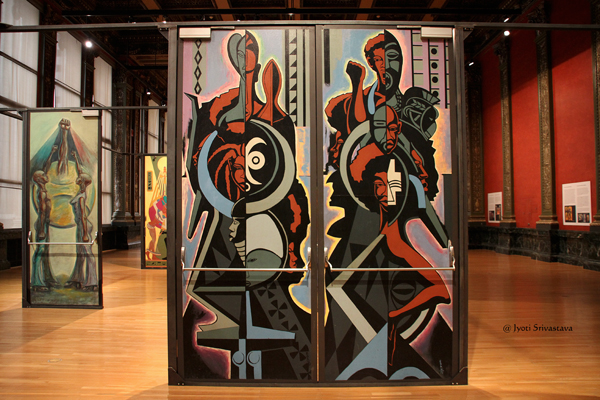 The theme of family, community and unity are embedded in these murals. “The first floor door contain clenched fist alongside warrior like figures, divided in half, with one side suggesting Black Power, while the other conveying African sensibilities.” The opposite door features Akuaba figure, representing fertility. 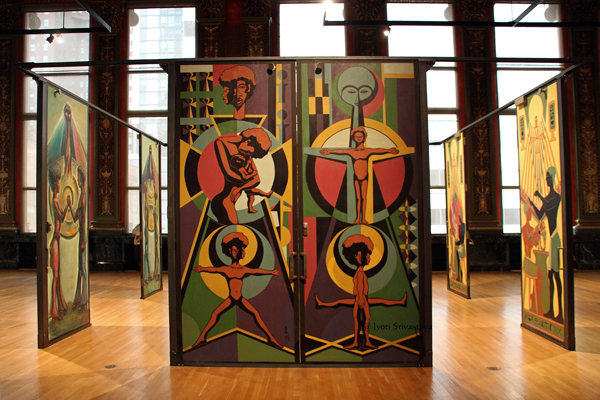 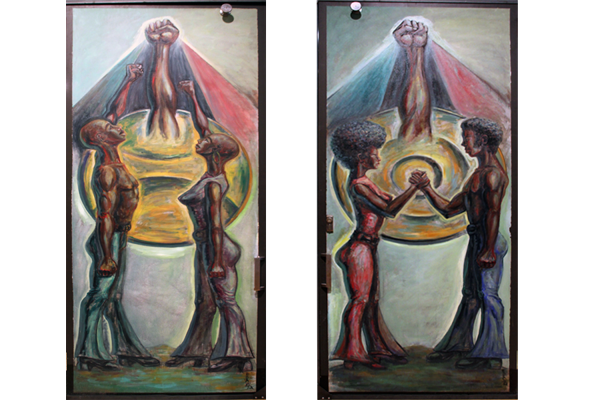 Stairwell D imagery is presented in a more naturalistic manner. One of the most powerful images are the Black Power and survival images. Wade created an imposing image of a man kneeling in prayer on a cross before him, a bottle on side and a needle on the other. The figure is situated in a metaphorical prison. It is a reminder to all to rise above anything that imprisons the body and mind. 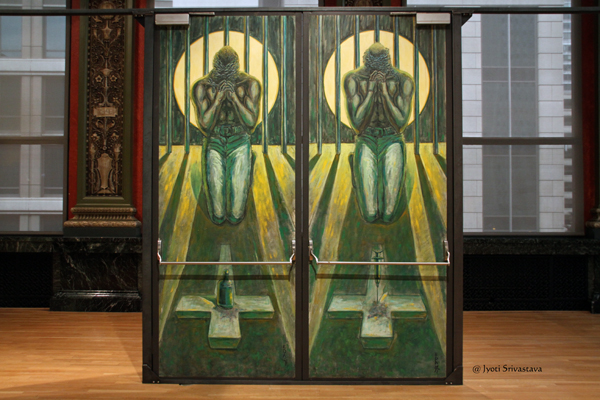 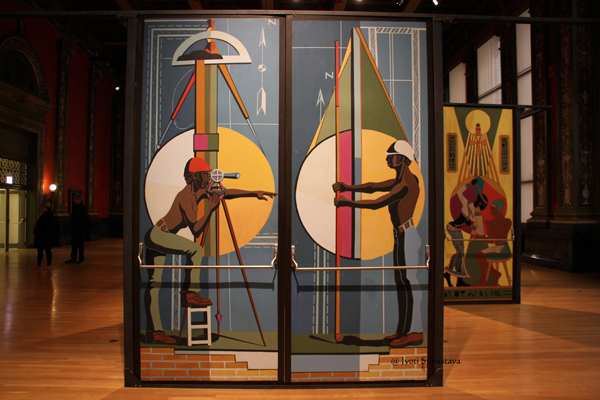 Students enrolled for drafting, engineering and art courses on the third floor are welcomed by figures surveying the land.
Basement level had images of dancers, atheletes and musicians. 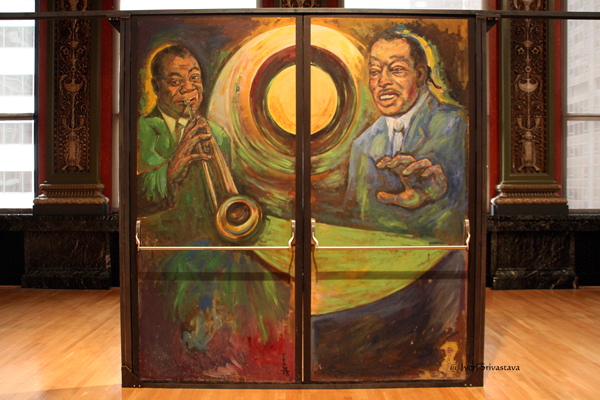 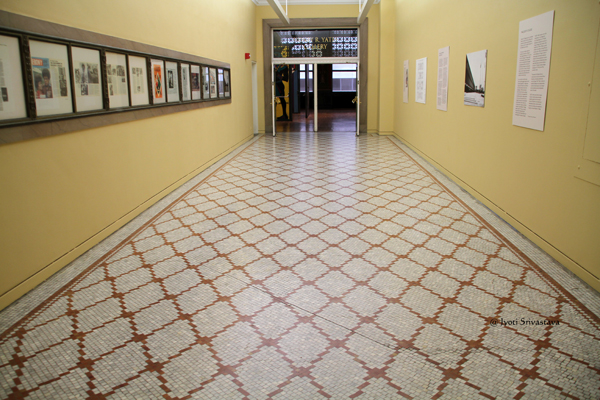 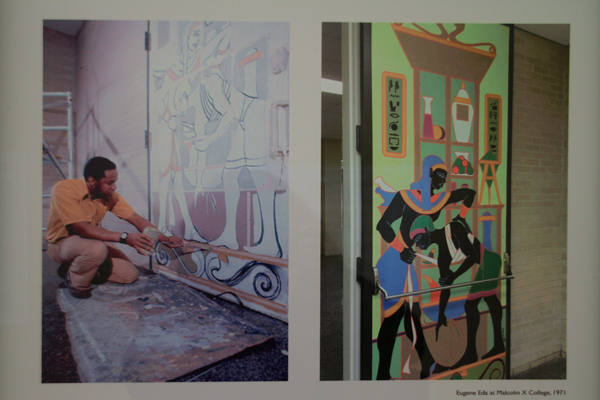 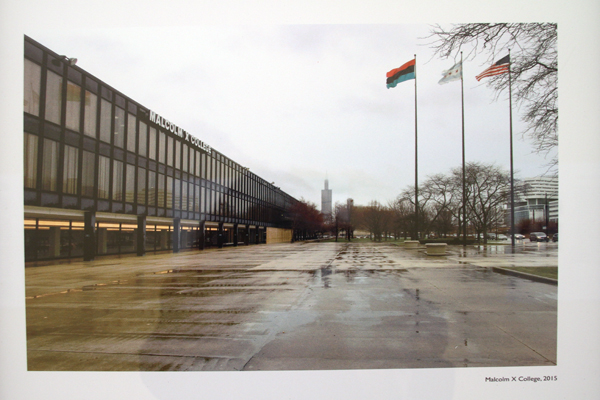