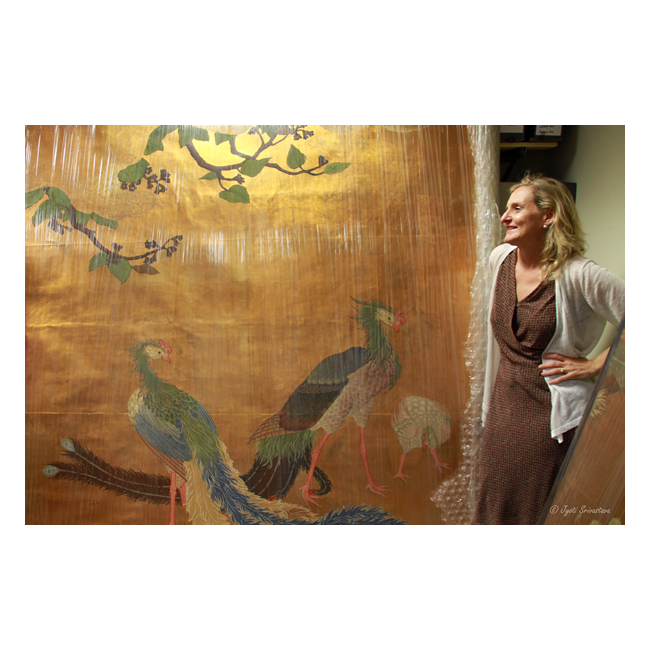 August 2015 created quite an excitement among Chicago historians and art aficionados with the announcement that three Japanese sliding door paintings from the 1893 World’s Columbian Exposition were discovered in a Park District storage facility.

“At a time when we are working to honor Jackson Park’s historic past by revitalizing the park to restore Frederick Law Olmsted’s vision, it is a thrilling development to have found original artwork from the 1893 Exposition”.
– Mayor Rahm Emanuel 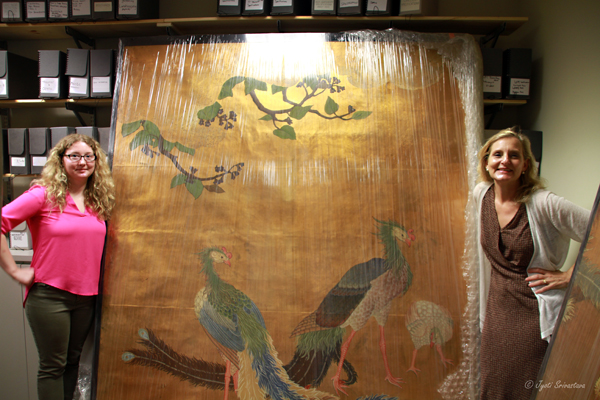 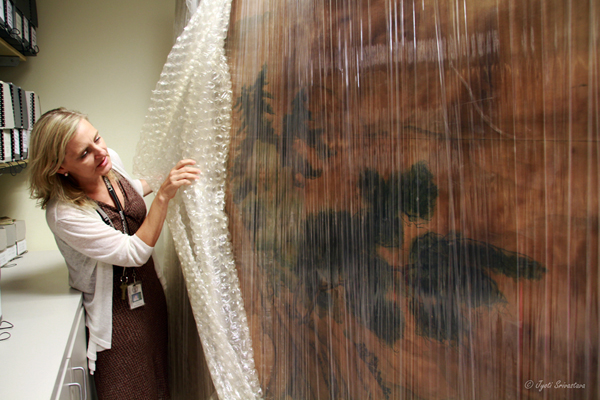 The other side of the above sliding door panel.

NOTE: All paintings are in their protective wraps!

The three, two-sided panels, are painted sliding doors, known as fusuma. These are attributed to Japanese artist Hashimoto Gaho [1835-1908]. The panels wee believed to be missing or destroyed after the fair. They were discovered in Park District storage facility. When city officials found them, they initially believed they were displayed during the 1933 World’s Fair. But Julia Bachrach, a Park District historian, found documentation that indicated they actually date back to Chicago’s 1893 World’s Fair. According to Bachrach, the paintings were displayed in the Phoenix Pavilion [Ho-o-den] on the Wooded Isle at the center of the 1893 Exposition.
Note: “Ho-o” stands for the Phoenix, and “den” means home, or in this case pavilion. 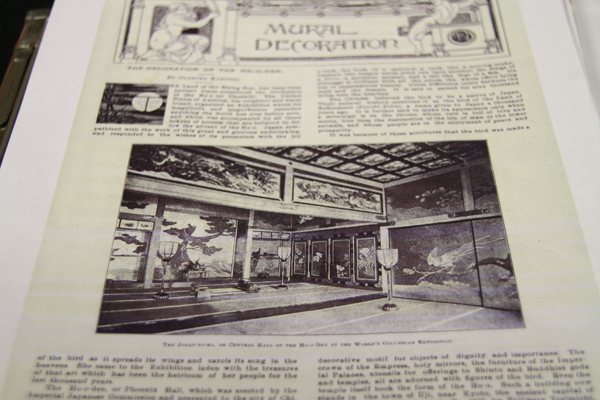 “Mural Decoration” with article on Phoenix Pavilion at 1893 Exposition.

The journal “Mural Decoration” has a wonderful description of the Phoenix Hall [Ho-o-den] at the 1893 Exposition.
An excerpt..
“The Land of the Rising Sun, has been from ancient times considered the birthplace of the Ho-o [or Phoenix]. The United States of America, her neighbor and warn friend, organized an exhibition which for magnitude and magnificence exceeded anything te world had ever before seen, and which was accompanied by all those token of success that are believe to follow the advent of Ho-o”. It further reads.. The Ho-o-den, or Phoenix Hall which was erected by the Imperial Japanese Commission and presented to the city of Chicago, derives its name from the representation of the fabulous bird”.

There is a delightful description of the Ho-o [Phoenix] in the journal..
“The Ho-o is described by the ancients as having the head of a cock, the beak of a sparrow, the neck of moving snake, feathers like dragon, scales piled one upon another, the wing of Kirin [a mythical animal], and the tail like that of a fish. Its plumage is brilliant with all the colors, the whole effect being one of supernatural beauty. Little difference exists between the male and the female. It is said to ascend for nine thousand miles into the heavens.” 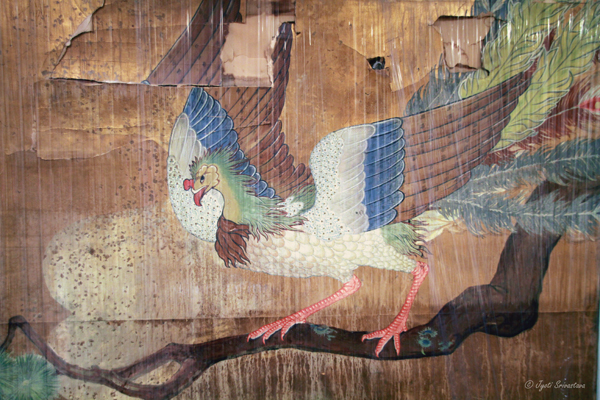 Japanese Panel / Ho-o or the Phoenix

After the discovery was made, Janice Katz, associate curator of Japanese art at the Art Institute, and Rachel Freeman, Asian art conservator at the Art Institute, evaluated the works and concurred that these relics are in fact the original Japanese sliding door paintings from the World’s Fair of 1893. Additionally, historic photos of the fusama closely match the paintings.

“These paintings bring to life, in vivid color, a moment of history that had previously been lost forever.”
– Janice Katz, associate curator of Japanese art at the Art Institute.

The fusama are representative of traditional Japanese construction techniques. The inner wooden fretwork was covered with a layer of paper before the painted surfaces were attached. Before installation, the black lacquer frames were fitted over the edges of the fretwork cores. The frames were then eased into waxed grooves in building’s floor, where the paintings functioned as sliding doors.

The three sliding doors are in moderately stable condition, but will require conservation treatment. The Park District is working  in partnership with the Art Institute of Chicago to conserve the paintings, though it has yet to be determined how they will be displayed once conservation efforts are complete.

“The rediscovered paintings remind us of the lush history that lives in Chicago’s parks.”
– Michael Kelly [Chicago Park District General Superintendent and CEO].

In the 1970s, the Park District discovered carved transom panels [ranma] from the Phoenix Pavilion. These ranma panels were conserved and put on display at the Art Institute of Chicago in 2011.

Earlier this year, in summer, there was another exciting news related to the Garden of the Phoenix in Jackson Park, when the Mayor joined Yoko Ono, representatives of Project 120, the Consul General of Japan at Chicago and others to announce the installation of a permanent piece of public art there, by Yoko Ono.

These positive development boosts the bold plans to revitalize the Jackson Park, and to establish it as one of the most extraordinary urban parks in the nation. In total, an estimated $29 million in investments is planned to return the park to the original vision by Frederick Law Olmsted, restoring its landscape and its character. These investments will include habitat restoration, landscape improvements, and tree plantings. 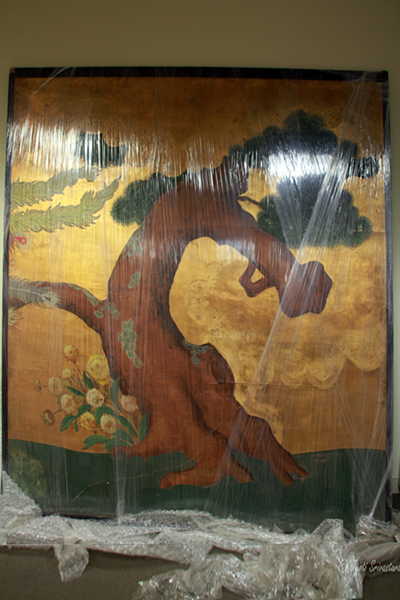 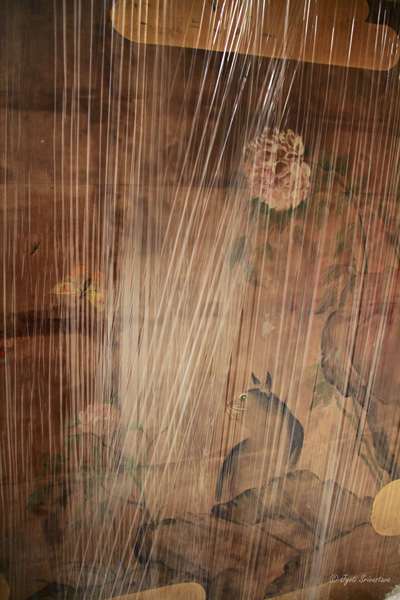 The other side of the above sliding door panel.