Congratulations CSI – for 10 Years of Enhancing Public Spaces through Sculptures!!! 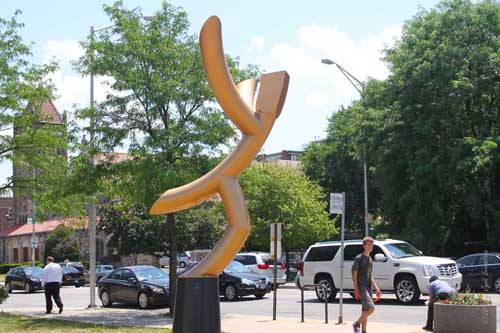 Congratulations to Chicago Sculpture International [CSI] for the 10th anniversary!
I take immense pride in my long association with this group, having seen, photographed and documented many of their exhibitions. I have also had the pleasure of calling many sculptors as my friends. Thank You for the love and affection! This post is to celebrate the 10th anniversary of CSI! Congratulations!!!
Disclaimer: I am not a CSI member and have never been one! But I have worked very closely with the Group. However, this post is as an observer outside of the group!

Sculptures are fascinating! The act of transforming materials – metal, wood, clay, stones, marble or even found objects – into pieces of art is very intriguing. Sculptures may have a utilitarian function or have pure aesthetic appeal. The location of the sculpture is very important in creating the right mood for appreciating the art. The sculpture then engages the viewers in a dialogue, which maybe very personal, or involve the entire community. It maybe commemorative, non-commemorative, inspirational, disturbing, and may generate socio-economic-political discussion, or be a source of calm self-reflection. It all begins with an artist and their imagination and some materials in hand, and may leave an indelible imprint on the mind of the viewers.

Chicago has a very robust art scene. There is a constant endeavor to transform public spaces into art galleries. When we are talking about art in outdoor public spaces, sculptures become especially significant, for the very basic reason that they manage to survive outdoors in the harsh ever-changing Chicago weather! In this context the group “Chicago Sculpture International” takes a very important role as can be understood by their mission statement..
The Chicago Sculpture International [CSI] advances the understanding and creation of sculpture as a unique and vital contribution to society. The CSI seeks to expand public understanding and appreciation of Chicago sculpture through exhibits and public forums on sculpture. To engage artists and art professionals in a dialogue to advance the art form, and promote a supportive environment for sculpture and sculptors.

CSI was established in the year 2004, as a non-profit organization, an affiliate of the International Sculpture Center [ISC]. With only six founding members – Terry Karpowicz, Bob Emser, Nicole Beck, Christine Rojek, Tom Scarff and Barry Tinsely – the group has grown today to more than 200 active members.

Over the past 10 years CSI has organized many exhibitions at various public locations, both indoors and outdoors. They have been collaborating with other organizations in finding new venues for exhibitions. The latest exhibition “Invoking the Absence” at Elks National Veterans Memorial is unique as it is the first ever art exhibition at Elks Memorial. Curated by Lucas Cowan, who is currently Director of Public Art at Maryland State Arts Council and earlier he was Curator of Exhibits at Chicago Department of Cultural Affairs and Special Events, the exhibition – free and open to all – has been drawing a steady flow of visitors, and added another feather in the CSI cap..click here.. 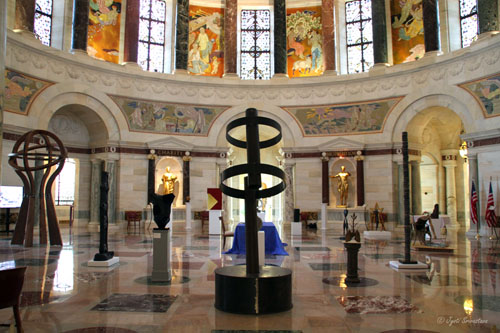 CSI has an ongoing collaboration with Chicago Park District [CPD]. This year CDP and CSI are collaborating on Chicago Tree Project, which involves converting dead trees into pieces of art. Last year [in 2013] they collaborated on “Sculpture Now: Artwork Along The Lake”, perhaps the biggest exhibition by CSI, where 64 large-scale outdoor sculptures were installed from Promontory Point in the South to Belmont Harbor in the North. Other collaboration with CPD includes “Under The Golden Dome” at Garfield Park Fieldhouse [2011] and the series, “Form in Flora” in Garfield Park Conservatory [2010] and Lincoln Park Conservatory [2011 and 2012 ]. This year, Form in Flora IV is being exhibited at Nicholas Conservatory in Rockford. I believe this is CSI’s first exhibition in Rockford!. 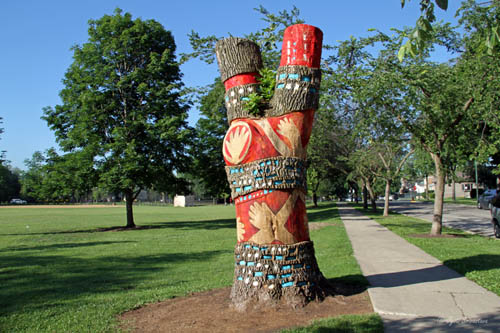 SOS – by Karl and Indira Johnson, part of 2014 Chicago Tree Project, a collaboration between CPD and CSI 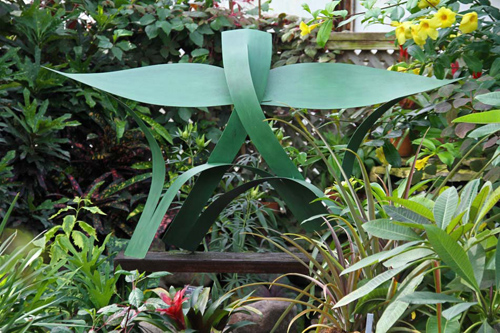 CSI is also very closely associated with Chicago Sculpture Exhibit [CSE], an Illinois not-for-profit corporation. CSE was founded in 2001 by then Alderman Vi Daley. Daley created the program, the Lincoln Park Community Art Initiative, to beautify the Lincoln Park neighborhood. The show has continued to grow over the years. Many members of CSI participate in the CSE shows. 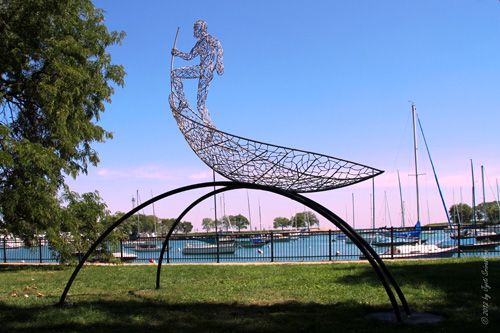 Confluence – By Boyan Marinov at Belmont Harbor, as part of “Sculpture Now: Artwork Along the Lake”, 2012

CSI as a group is not restricted to just organizing exhibitions. It is a very active group that helps each other in in the process of making sculptures. Sculpting is a very tedious process! Be it metal-casting, wood-crafting, stone-carving or any form of sculptor making, it requires intense physical labor and hours-and-hours are spent transforming materials into finished sculptures. Sculptors depend upon help by others, especially other sculptors who understand the process. CSI provides this support network. Within the group members frequently consult about vendors, materials, process and help each other in completing the work. What I find really interesting is that this is a group of sculptors competing each-other for commissions, and at the same time helping each other finish their work. As anyone would understand, this dynamics is difficult to manage! 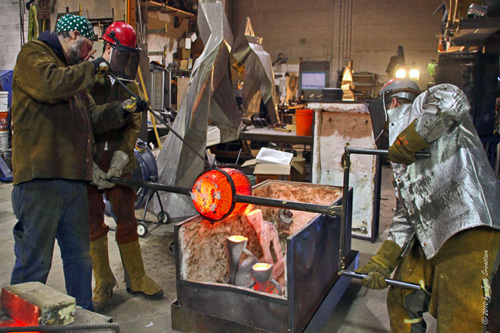 Making of Bulldog and Hydrant by Marshall Svendsen. / Metal Pour where Marshall is helped by Eric Stephenson

If the process is metal-casting, a sculptor has to depend on others. Here is a shout-out to Marshall Svendsen, who most generously allowed me document the process of bronze-casting, something that I had always wanted to see… click here.. 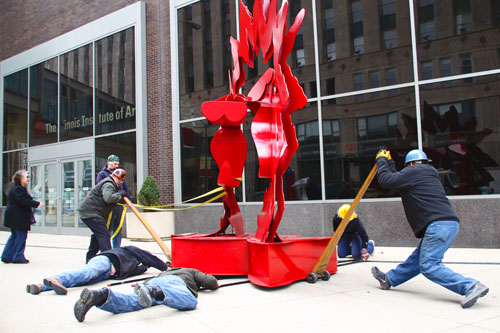 Installation of Flappers- by Ruth Migdal by CSI team-members for the Avenue of Sculpture, at Art Chicago, 2011. 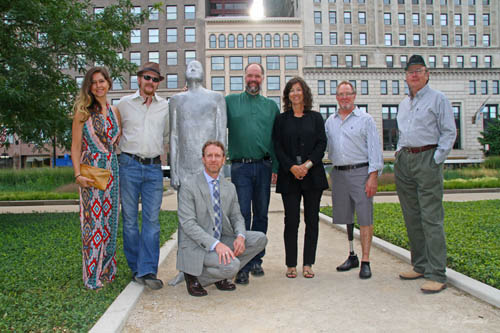 Borders by Steinunn Thorarinsdottir and some sculptors who helped its installation, belong to the CSI Group 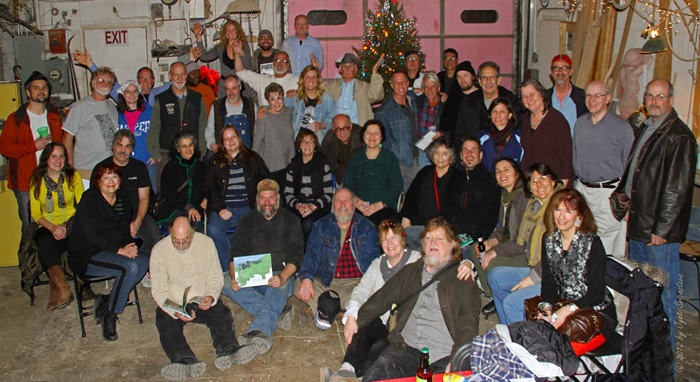 I began with a personal note and would also end with one.. Thank You for embracing a non-artist like me to the group! I deeply appreciate the friendship of many who I have come to know personally! Sometimes I find it very amusing that having grown in a far away country India, I have found a place in the sculpture community of Chicago. Thank You!!! And Wishing the group many more exhibitions in the coming years!!!

2012: The Process of Scale [at Ukrainian Institute of Modern Art /UIMA] >click here..