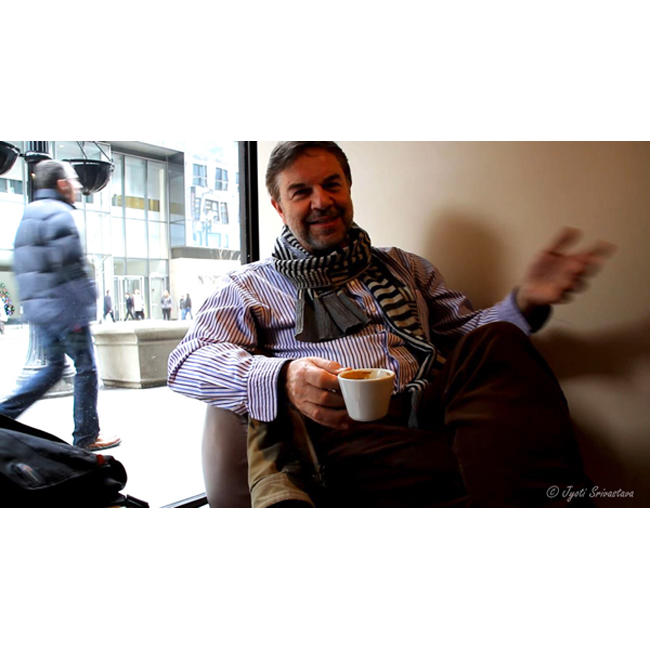 I have been meeting with sculptors of Chicago and learning about their craft and artistic vision. But, this is the first time I am writing a post on a curator.  Rolf Achilles is curator of Smith Museum of Stained Glass at Navy Pier, and also of the recently installed American Victorian Stained Glass Windows at Macy’s pedway. But calling Rolf Achilles as just a curator, severely limits the scope of his work. Rolf Achilles is an art historian, author of  about 15 books, and a Board Member of many important cultural institutions of Chicago, including the Driehaus Museum in Nickerson Mansion, Glessner House, All Arts Foundation, and Chair of Chicago-Hamburg Committee Sister City. Overall a fascinating person, with a wealth of knowledge and experience to talk on any topic related to art, architecture and history of Chicago. I sincerely thank him for taking some time out from his extremely busy schedule, to answer my few questions, and to share his views on the art scene in general and Stained Glass Windows in particular!

Over the past few years, I have had the immense privilege meeting with many sculptors of Chicago, observing work-in-progress, installation and exhibitions, and then documenting my experiences through my website/blogs.  This year I would like to meet some behind the scene people, like the curators, art historians and such.  And when it comes to stained glass windows at Smith Museum or Macy’s pedway, most of the craftsmen are unknown.  So the best person to talk to, was the curator of these public museums,  Rolf Achilles. 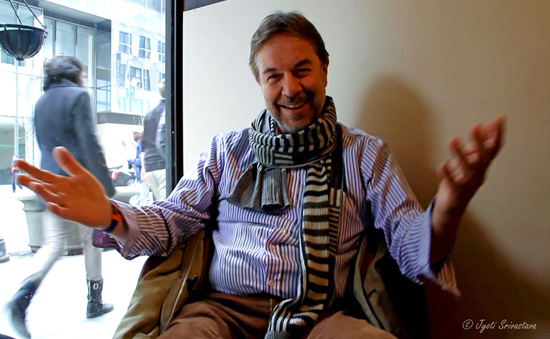 Tuesday, March 11, 2014:
I met with Rolf Achilles at Lavazza Espression in the Loop.
We got wonderful seats next to window, with a view of the street,
and of Chicago’s iconic monument by Pablo Picasso at the Daley Plaza.

I had requested Rolf Achilles to spare some time for an informal talk/interview for some queries I had.
There were two topics in particular, I wanted to talk on
[1] His role as a curator of the Smith Museum of Stained Glass at Navy Pier
and also of the recently installed American Victorian Stained Glass Windows at Macy’s pedway
[2] Chicago History Timeline, which he updates very frequently.
Our talk went much beyond these two topics and drifted to Sol Lewitt, Ellsworth Kelly, Frank Stella, Martin Pureyar and so on.. 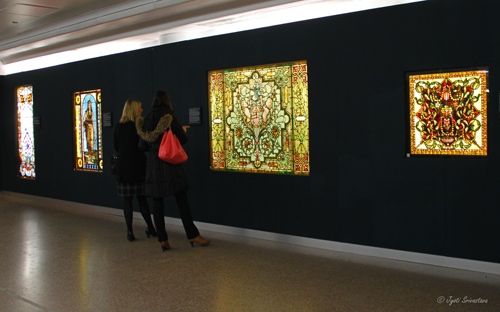 Let me begin with stating something I have observed over the past few months that I have known Rolf Achilles. His one very significant contribution has been in popularizing the art form of stained glass windows, and bringing it in the realm of general public conversation.  His constant research on the topic of art glass, and involving the public in the discussions through speeches, writing, photographs and even the use of social networking sites,  have all contributed to bringing this almost exclusive art form, in the sphere of  general public dialogue.  The term stained glass has traditionally been applied to the windows in churches and other significant buildings. As far as public art goes, we do have some stained glass windows in libraries and police stations. But generally when we used the term public art, we usually refer to sculptures, murals and fountains;  and  the art of stained glass falls below the radar. Through his efforts Rolf has tried to enlarged the scope of public art to include – art glass/ stained glass windows – in the mix! 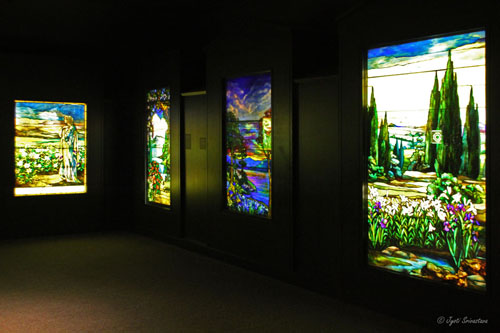 Smith Museum which opened in 2000,  is a millennium gift to the people of Chicago from Maureen and Edward Byron Smith, Jr., and their sons Edward and Peter Smith.  Like any other museum, Smith Museum has a large collection of pieces that not on display. Some of these – 22 to be exact – have recently been installed at Macy’s pedway, which opened in Dec 2013.  Rolf Achilles is a curator of both these museums. At both these places, a visitor can see,  at eye level, what is normally installed at high above places. All the artifacts have been labeled meticulously, with lot of information on the piece. [Thank You Rolf! ] So anyone can have a self-guided tour. One can learn how American studios – specially that of Louis Comfort Tiffany – revolutionize the technology of stained glass making in the 1870s. The new types of glasses introduced, like Opalescent , Drapery and Confetti  glass.  How American stained glass studios were socially progressive,  by employing a large number of women in their workforce, at a time when males dominated the workforce everywhere.  There is a lot to be seen and learned from these museums, as stained glass windows are not only aesthetically pleasing, but also are a reflection of culture and socio-economic trends of their times.

But his field of expertise is much beyond stained glass windows.  Rolf Achilles is an art historian.  He has authored many books, some independently and some collaborative. These are on diverse topics like American movie palaces, Chicago School of Architecture, Newberry Library, Mies van der Rohe and many more.

Rolf Achilles has also been maintaining Chicago History Timeline..  click here..
It goes back to the year 1673, to the current 2014. It provide a rich source of information on any topic related to Chicago, with some very interesting trivia! I asked him about this timeline, which can be seen in the video below.  [My “ahan” are the most annoying part of the video and I apologize for that! From next time a complete silence when someone is talking. lesson learned!]

Some other interesting trivia..

In February 2013, Rolf Achilles was awarded the Freedom of the City of London, by the Mayor of London. Others who have received this honor are Charles Lindbergh, Winston Churchill, Dwight Eisenhower, Luciano Pavarotti, Bill Gates, Alan Greenspan, Margaret Thatcher, Nelson Mandela, JK Rowling to drop a few names. Perhaps he is the first art historian, to be awarded this honor!

In February this year [February 12–22, 2014] as a Committee Chair of Hamburg-Chicago Sister Cities, Rolf Achilles was in Hamburg, representing Chicago in the 20th anniversary of the sister city relationship between the two cities.

Thank You Rolf Achilles for your time!!!
And Thank You for all the things you do for Chicago!!!

I think, I need a follow up, Lunch with Rolf Achilles!

Some more images from the day!
Click to enlarge.. 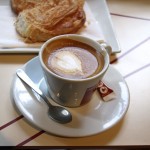 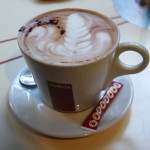 My coffee with leaf motif! 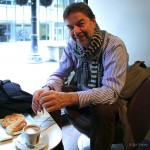 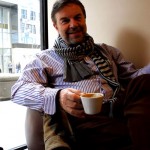 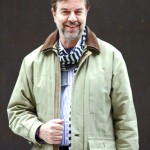 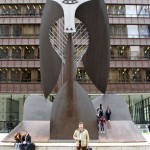