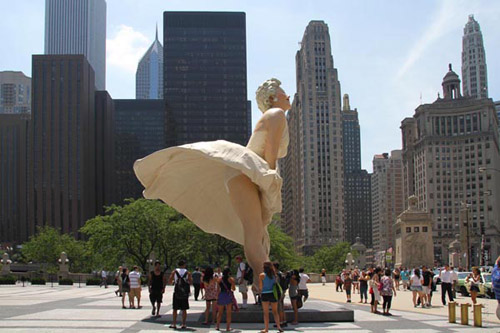 The Pioneer Court Chicago, has been the venue of some of the most  discussed and photographed public art exhibits in Chicago! Important to note is that the so called public space, the Pioneer Court, is actually private property. It is owned by Equitable Life Insurance Company & The Chicago Tribune Company. The Art exhibits here are brought to us by Zeller Realty Group..  click here..

If its all about location, location, location; then what better place to exhibit art, than the Pioneer Court. It is gateway to the Magnificent Mile. It serves as an important tourist center being in the area to hop-on the various tour buses, trollies and river cruises. Not to forget the beautiful signature Chicago buildings that form it’s backdrop, with Tribune Tower, Wrigley Bldg., Michigan Ave. bridge and the London Guarantee bldg. all offering the picture perfect Chicago cityscape. To top it all, the place is historically significant being the site of Jean Baptiste Pointe DuSable House, who is known as the Founder of Chicago.

The exhibits at Pioneer Court have often been subjects of animated discussion. The latest exhibit “Watch” by Hebru Brantley has won huge public acclaim. But the earlier “Forever Marilyn” by Seward Johnson was not so well received by the public.. Here I just leave you with the images to judge for yourself, what you like or dislike! 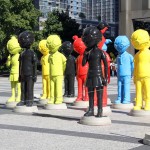 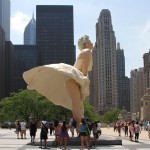 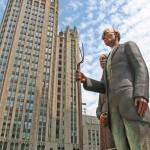 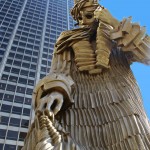 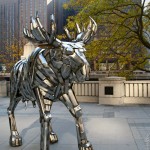 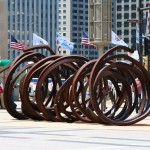