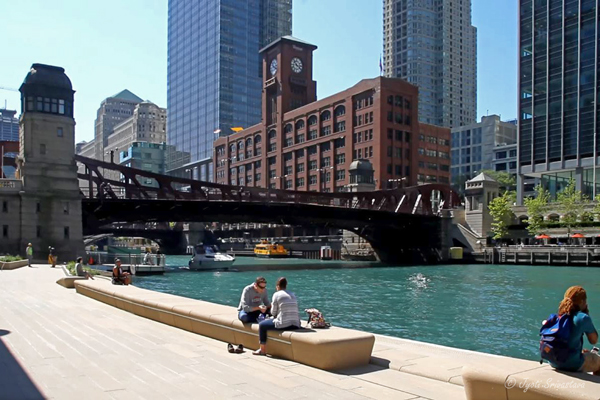 The construction of Chicago Riverwalk has been in progress for a few years now.   In June 2015, three new pedestrian underbridges were completed:  State Street, Dearborn Street and Clark Street  bridges.

With the progress of Chicago Riverwalk project, some very cool new terminologies are being added to Chi-Town vocabulary, like.. Marine Plaza, Cove and River Theater. By 2016, when the additional underbridges will be completed, we will have Swimming Hole, Jetty and Broadwalk. The entire stretch of Chicago Riverwalk has been divided into districts like Market District, Civic District, Arcade District and Confluence District.

This post is on the Chicago Riverwalk related terminologies! 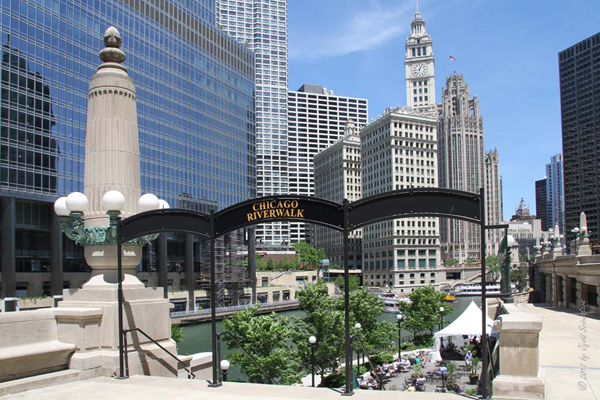 But first, a brief introduction on the construction of Chicago Riverwalk.

CHICAGO RIVERWALK  is being developed along the south bank of the Main Branch of  Chicago River  which runs east-west from Lake Michigan to Franklin Street after which it bifurcates into North and South Branches.  The plan  is to establish a continuous pedestrian walkway from Lake Michigan / Lake Shore Drive bridge to Lake Street bridge along the river.

The main branch of Chicago River has ten bridges.  Before 2010, there were only two underbridges, where the pedestrian could walk from one segment of the riverwalk to another. Both these were at he east end of Chicago River, Lake Shore Drive and Columbus Drive underbridges. So a person could walk from Lake Shore to Michigan Avenue bridge, and then the path dead-ended into the framework of the bridge. From Michigan Avenue to Lake Street, each segment of the riverwalk  met with similar dead-end in bridge infrastructure. A person needed to climb the stairs, reach the upper Wacker Drive, cross the street descent another staircase to resume the riverwalk path.  A continuous pedestrian walkway required construction of eight new underbridges, that would link the different segments of Chicago Riverwalk.

Note: The Lakeshore Drive underbridge is a 170-foot trellised passageway that connects Lakefront Trail to Chicago Riverwalk.  It is called “Riverwalk Gateway” and has ceramic mural installation by Ellen Lanyon that narrates the history of Chicago and Chicago River.
The Columbus Drive bridge was completed in 2009, and a pedestrian underbridge was integral part of the bridge design.

The construction of Chicago Riverwalk is not only about construction of underbridges to facilitate connections between different segments of the riverwalk, but about creating the whole environment making the river corridor an open and inviting public space. There are landscaping, hardscaping, installation of light-fixtures, and riverwalk seating arrangements with granite and wood benches.  There are ramps and elevators for universal  access between river and street levels.  There are provision for loading and storage spaces to facilitate business operation.

City of Chicago Official website.. click here....
The Marina is designed to accommodate restaurant retail space and public seating. The River Theater will serve as the location for the vertical access between Upper Wacker and the Riverwalk level. The Cove may accommodate kayak rental retail space and allow for human-powered watercraft to dock.

The Swimming Hole provides a great area for recreation, which may include a water feature such as a zero-depth fountain. The Jetty is a location for learning about the ecology of the river, with floating gardens and piers for fishing. The Boardwalk will be the site of an iconic bridge bringing people from Upper Wacker down to the Riverwalk level. It will be surrounded by floating gardens and landscaping. 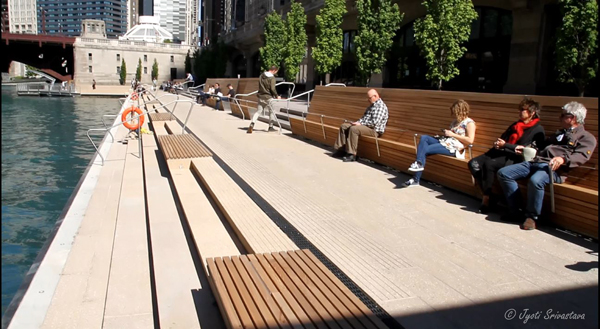 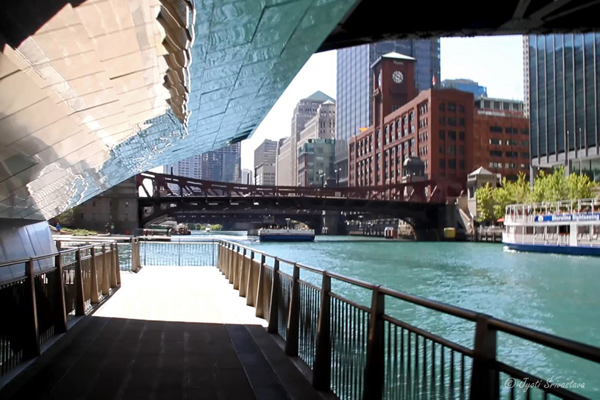 Chicago Riverwalk – LaSalle street underbridge – linking Marine Plaza with Cove. The galvanized steel canopy protects the pedestrains from falling debris and also provide a visual contrast with the bridge above. 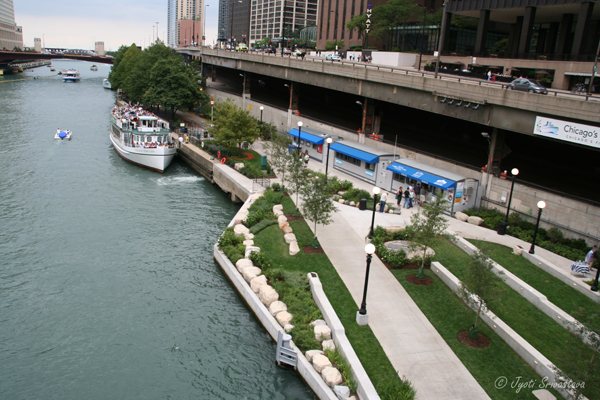 1. MARKET DISTRICT: The area from Lakefront to Stetson Avenue. The underbridge walkway beneath Columbus Drive provides for an unimpeded pedestrian path between Lake Front to Michigan Avenue and further west. This stretch of the riverwalk offers a natural experience that contrasts vividly with the urban, manmade character of the other districts. There is a mix of small food and drink vendors operating in this area during summer months, along with a bike rental and tour business.
Bridges in Market District: Columbus Drive bridge.

2. CIVIC DISTRICT: The area located between Stetson Avenue and State Street, anchored by Michigan Avenue. This district is the primary concentration area for boat tour and visitor activities. This area is also home to the Chicago Bridgehouse Museum.

The underbridge connections beneath Wabash and Michigan Avenues were completed in April 2010, making it possible to walk from Lake Shore to State street. Along with the construction of underbridge in 2010, The Michigan Avenue Bridge rail detailing were also restored.

3. ARCADE DISTRICT: The area located between State Street and Franklin Street. It takes its name from the architectural detailing that separates the riverfront from Wacker Drive. The arcade was rebuilt as part of the East/West Wacker Drive reconstruction project completed in 2002. The majority of bridgehouses in this corridor are of historic interest.

4. THE CONFLUENCE DISTRICT: The part where the Main, North and South branches of Chicago River converge, It is bounded by Franklin/Orleans, Lake and Kinzie streets.This area has a rich history. It was the location of Chicago’s first taverns and
hotels, including the famous Wolf’s Tavern, Miller’s Tavern and Sauganash Hotel. This area was also home to the Wigwam, the convention center and meeting hall that served as the site of the 1860 Republican National Convention where Abraham Lincoln was nominated to run for President of the United States. 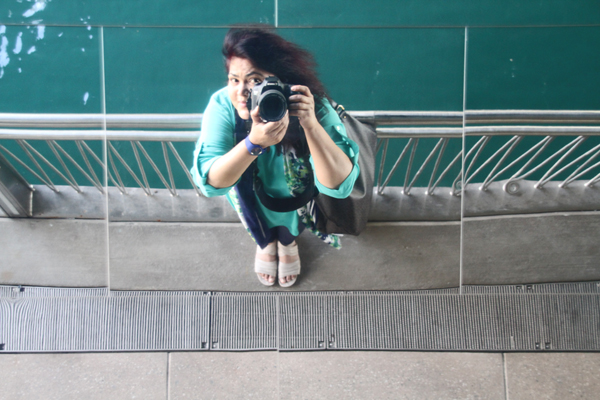