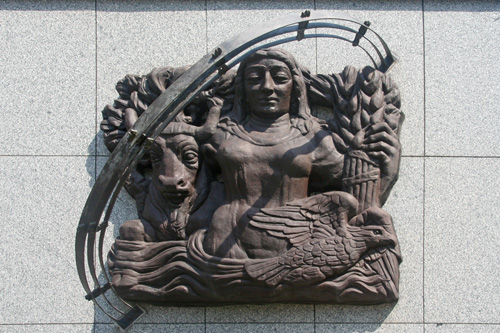 The bronze, 12 x 7 foot sculpture weighs 3 1/2 tons. The sculpture is symbolic of the city of Chicago. The female figure represents Chicago. She stands hip-deep into water, symbolizing Chicago emerging from the Lake Michigan. The waves also represent the Great Chicago Fire of 1871, so it also shows Chicago rising like a phoenix from the flames that once destroyed it. The sheaf of wheat, bull and eagle reference Chicago’s historic role as a center of commerce, the livestock market and air transportation, respectively. Floral forms evoke the city motto, “Urbs in Horto” or “City in a Garden.” Finally, the bronze ring arching across the relief represents Chicago’s central geography within the United States. it is said that his wife Estelle was Milton Horn’s “muse,” who served as the model for Chicago Rising from the Lake. 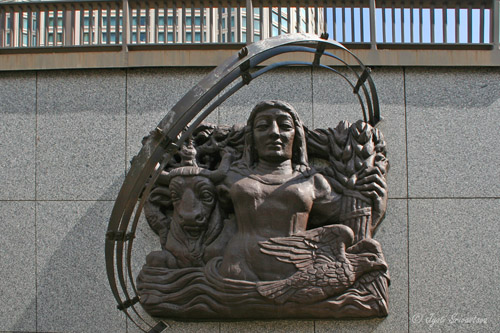 Chicago Rising From the Lake – by Milton Horn

In 1953 Milton Horn received a commission by the city of Chicago, [Department of Public Works] for the creation of this sculpture. It was completed in 1954. In 1955, it was installed in a parking garage at 11 W. Wacker Drive. In 1983, the garage was razed, and the sculpture was moved to a city’s storage facility. From here it was moved again, and found in 1988 in a dry swimming pool. It was lost again, and found again in 1997, by a Chicago firefighter, in a storage yard, covered under wooden pallets. However the bronze bars were missing. After a $60,000 renovation [paid by a philanthropist], the sculpture was reinstalled, after 15 years being missing, in 1998 at its current location on the wall beneath the northwest corner of the Columbus Drive bridge along the Chicago Riverwalk.