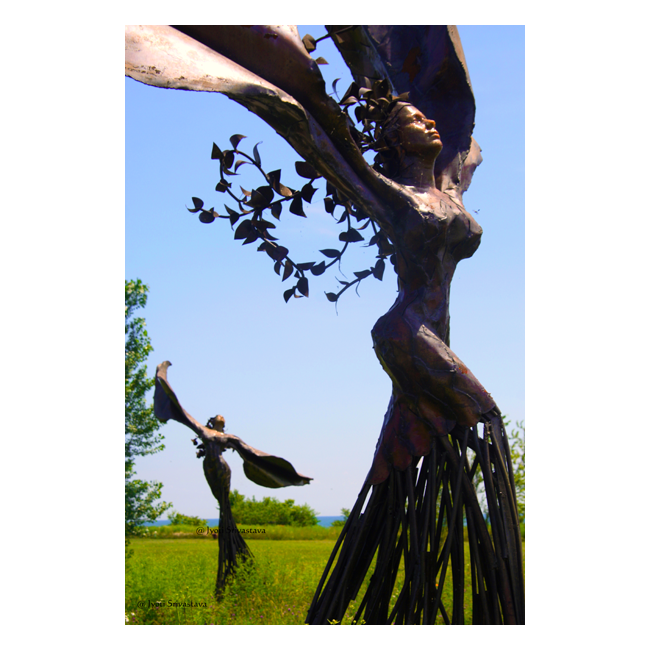 The Daphne Garden – by Dessa Kirk

These three figurative sculptures of Daphne are all made from scraps of discarded Cadillac cars.
One the the themes of this Chicago based artist of Dessa Kirk, is to find hidden beauty in ugliness.

In 2004, there were twenty-four “Art in the Garden” installations in Chicago’s various parks as part of  Special Project of the Chicago Department of Cultural Affairs. For the exhibit, artists were asked to integrate plant material into their installations to create constantly changing displays. One of them was Daphne Garden by Dessa Kirk. It was so well received that the temporary installation was moved to Northerly Island in 2006. 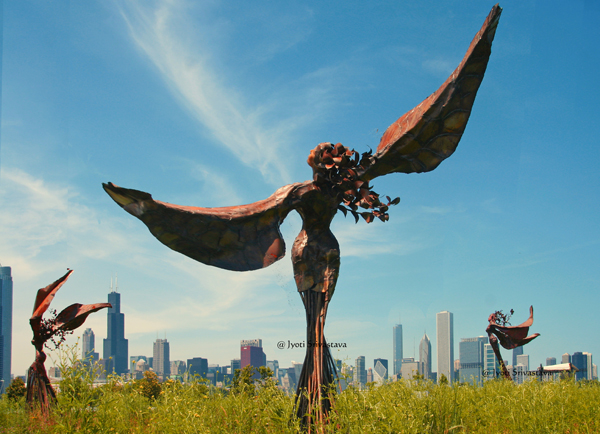 So who was Daphne?

In Greek mythology, Daphne was a beautiful girl who preferred to spend her time hunting in the woods rather than meeting men. Apollo fell desperately in love with Daphne and began chasing her. She ran from him faster and faster. When Apollo was about to grasp Daphne she prayed to her father, who transformed her into a laurel tree. Her hair became leaves, her arms became branches, her feet stuck fast in the ground as roots, her face became a tree-top, she retained nothing of her former self but her beautiful face. Apollo stood amazed and said, “since you cannot be my wife, you shall be my tree. I will wear you for my crown.” Apollo declared that the leaves of the laurel tree would always be green and he would always wear a wreath of laurel leaves around his head. Since then the laurel has become a symbol of victory in Greek culture. 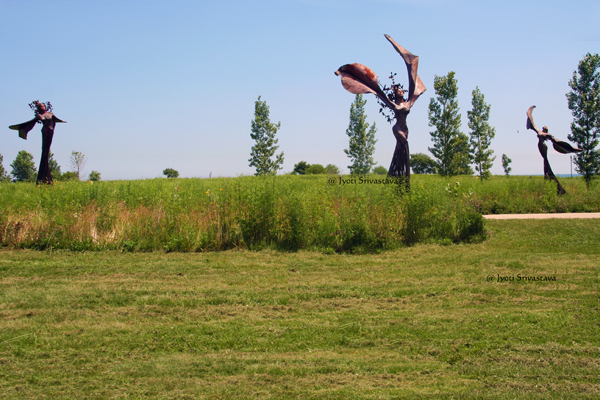 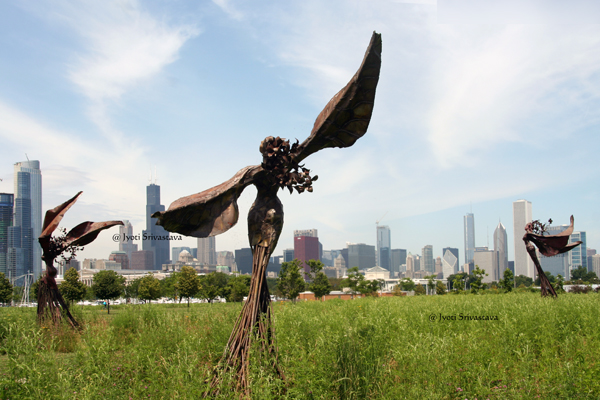 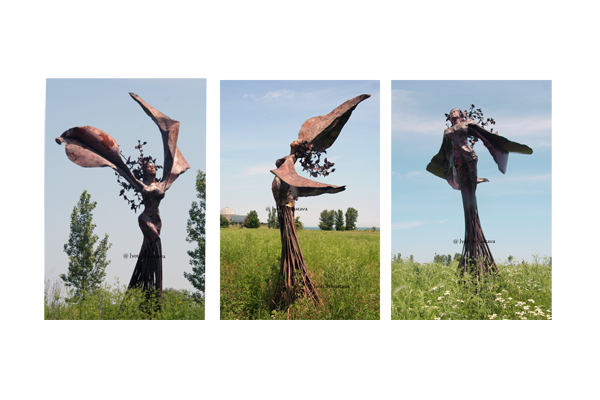 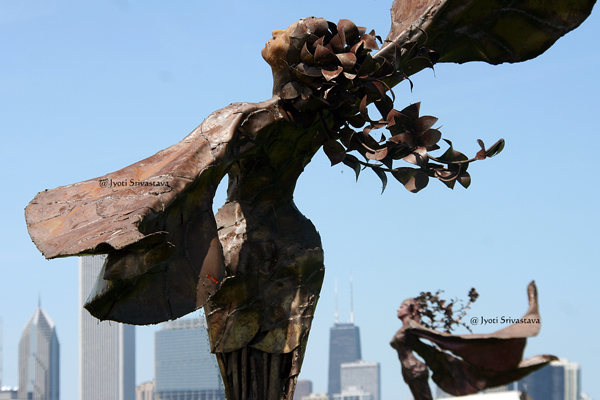 Northerly Island is a 91 acre peninsula that juts into Lake Michigan, located just south of the Adler Planetarium and east of Soldier Field. It is a man-made island [rather a peninsula] originally created to house the Century of Progress Exposition in Chicago in 1933-34.

In the “Plan of Chicago”, Daniel H. Burnham had imagined Northerly Island as one of the northern points in a series of manmade islands stretching between the Grant and Jackson Parks. His vision for this park included lagoons, harbors, beaches, recreation areas and grand stretches of green space that would provide breathtaking views of the lake and City skyline.

In 1947, a small airport “Merrill C. Meigs Field Airport” opened here on the Northerly Island. It was a single-strip airport with about 3,900 feet and 150 feet wide runway. In a controversial move on March 30, 2003 Mayor Daley ordered the demolition of the runway. This move was highly criticized. However now the area has been left open for native prairie plants. 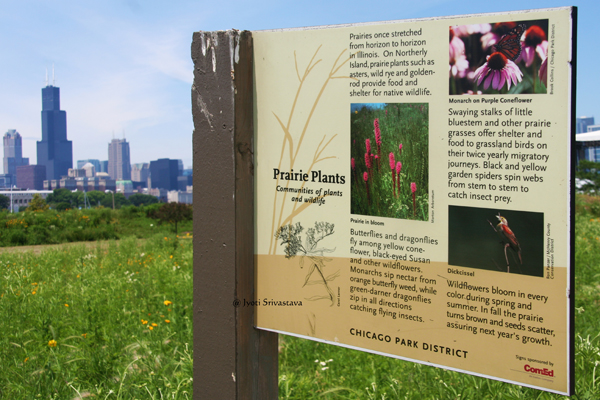 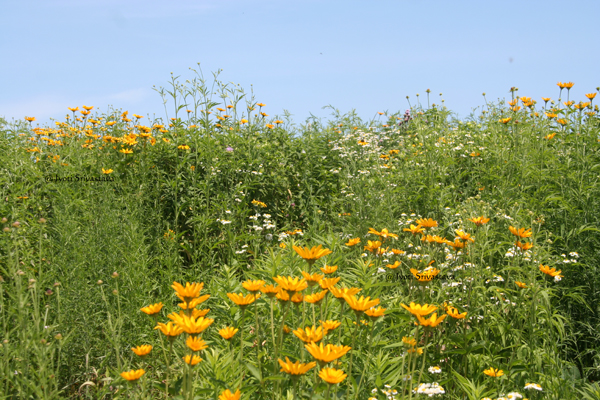 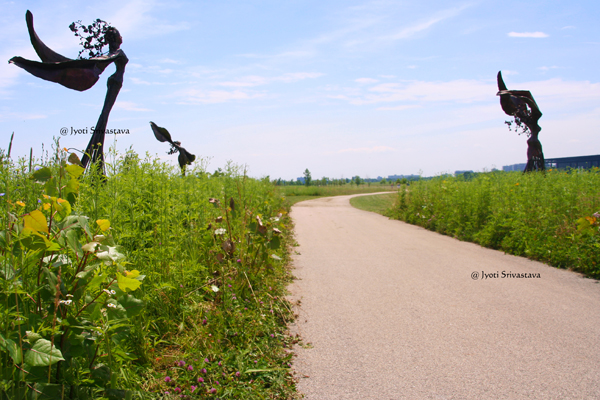