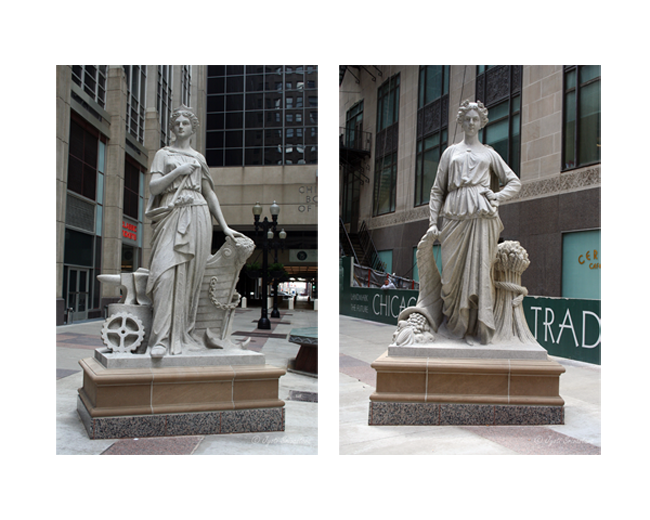 Lost for 49 years. Returned to original location after 75 years.

The plaque reads.. “Now a part of the LaSalle Street Plaza, the exchange’s symbolic statues serve as a daily reminder of the vitality and creativity that fuels the city of Chicago and Chicago Board of Trade”. 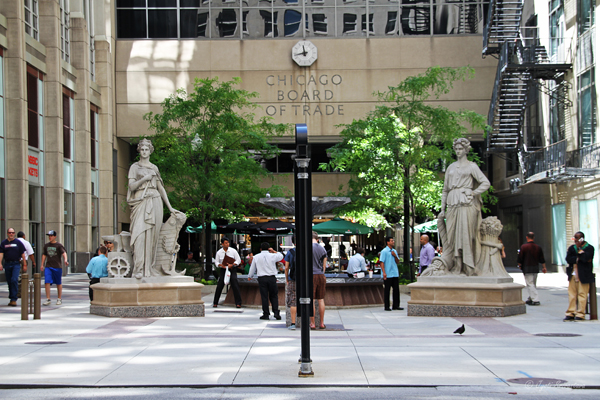 Agriculture and Industry: These sculptures were lost for 49 years. Returned to original location after 75 years.

The twelve-foot five-ton sculptures of Greek goddess symbolizing agriculture and industry stood at the entrance of the original Chicago Board of Trade, built in 1885. It was designed by William W. Boyington, best known today for his work on the Chicago Water Tower. In 1929, when the building was demolished to make way for the new Art Deco building, it was believed that the statues were lost. After about 50 years [49 to be exact], in 1978, the Forest Preserve District officials found them in the Hidden Lake Forest Preserve in Downers Grove. The forest preserve was the former estate of Arthur Cutten, a prominent Chicago Board of Trade speculator of the early 1990s. How the statues made its journey from the LaSalle Street to the Cutten estates is a mystery. The statues were then were moved to Danada Forest Preserve in Wheaton, where they have stood near the entrance for more than a decade. In 2005, after about 75 years; the statues were moved back to the Chicago Board of Trade plaza.
Jenn Harrman and Amanda Scotese, have an interesting story on the mystery surrounding the CBOT statues, published in Chicago Detours [April, 2014].. click here..