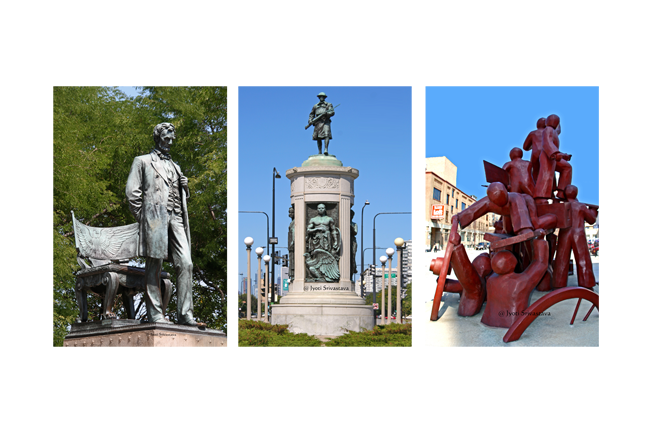 It’s a common misconception that the “Chicago Landmark’ status is designated only to buildings and disctricts in Chicago.

Interestingly some public art, monuments and historical sites that have also been designated as Chicago Landmark.
This encourages their preservation and protects against demolition.

The criterion for designating landmark status mentions “work of art” as one of the specifications.

Designation of a Chicago Landmark is a legislative act of the Chicago City Council. The Commission on Chicago Landmarks was established in 1968 by city ordinance, and was given the responsibility of recommending to the City Council that specific landmarks be preserved and protected by law. The ordinance states that the Commission [whose ten members are appointed by the Mayor], can recommend any area, building, structure, work of art, or other object that has sufficient historical, community, or aesthetic value. Once the City Council acts on the Commission’s recommendation and designates a Chicago landmark, the ordinance provides for the preservation, protection, enhancement, rehabilitation, and perpetuation of that Landmark. The Commission assists by carefully reviewing all applications for building permits pertaining to the designated Chicago Landmarks. This insures that any proposed alteration does not detract from the qualities that caused the landmark to be designated.

The criterion for Landmark Designation states: The Commission familiarizes itself with areas, districts, places, buildings, structures, works of art, and other objects within the City of Chicago which may be considered for designation by ordinance as “Chicago Landmarks,” and maintain a register thereof. In making its recommendation to the City Council for designation, the Commission limits its consideration solely to the following criteria concerning such Chicago Landmark Monuments and Sites.

Heald Square Monument honors Nathan Heald, commander of Fort Dearborn from 1810-1812. In the statue George Washington is portrayed clasping the hands of two of his civilian supporters, Robert Morris and Hyam Salomon. These these two men were the financiers of the American Revolution.  Lorado Taft, whose forebears fought in the Revolutionary War, designed the monument, which become his last work. It was completed by Leonard Crunelle. 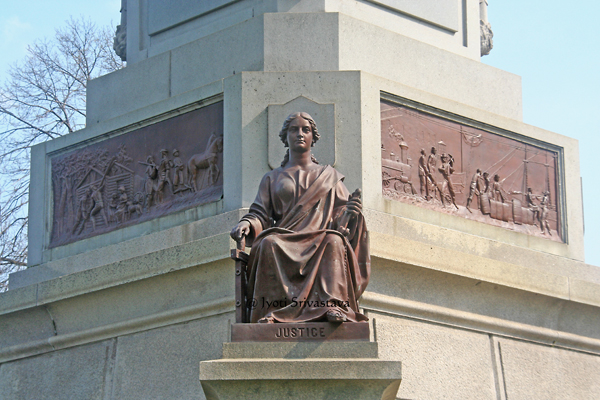 United States Senator Stephen A. Douglas, who died in 1861 at the age of forty-eight, was a firm believer in the future of Chicago. He held state offices and became nationally known for his debating skills in the Senate and in his campaign against Abraham Lincoln in 1858. This tomb is located on the land once part of the Douglas estate, Oakenwald. 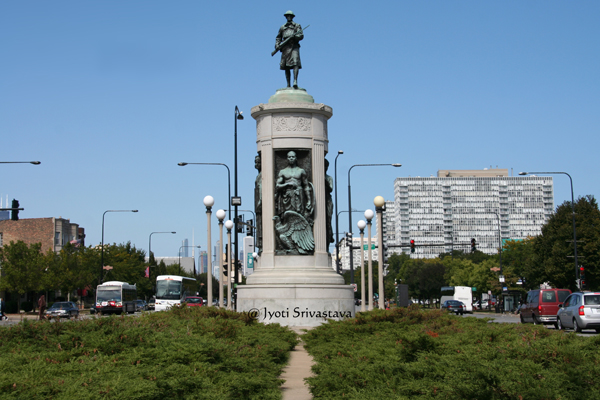 This structure was erected to honor the meritorious achievements of the Eighth Regiment of the Illinois National Guard, an African-American unit that served in France during World War I as part of the 370th U.S. Infantry, also known as Eighth Regiment Armory. The sculptor was Leonard Crunelle. He was born in France in a coal-mining town that was destroyed in World War I. He was a student of noted Chicago sculptor Lorado Taft. The granite column and architectural setting of the monument were a collaborative design of Crunelle and John Nyden, a Chicago architect. 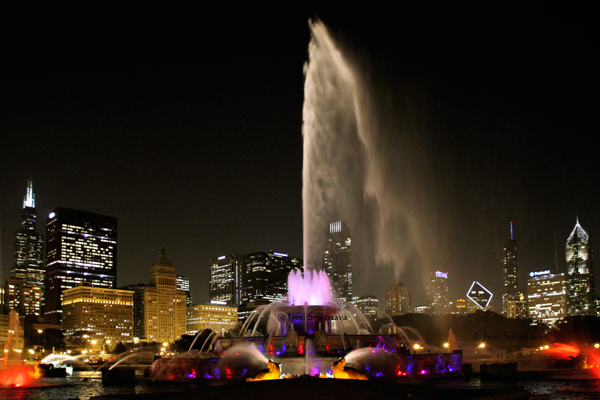 Kate Sturges Buckingham, a philanthropist and art patron donated the fountain in memory of her brother, Clarence Buckingham. The Fountain symbolizes Lake Michigan. It conveys the enormity of the Great Lake through its vast and impressive water displays. Some of the water displays use approximately 15,000 gallons of water per minute, and the major display, which occurs every hour for 20 minutes, sprays water to a height of 150 feet from the ground.  Bennett decided to place four pairs of Art Deco style sea horses to represent the four states that border Lake Michigan. 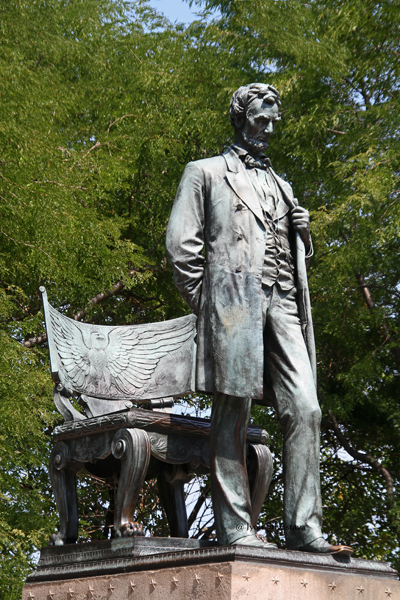 One of the oldest and most important public sculptures in Chicago, this monument to America’s sixteenth president influenced a generation of sculptors due to its innovative combination of a natural-looking Lincoln — depicted deep in thought as he is about to begin a speech — with a Classical-style architectural setting. It is the work of two nationally-important American designers, sculptor Augustus Saint-Gaudens and architect Stanford White, and is widely considered to be the most significant nineteenth-century sculpture of Lincoln. Several phases from Lincoln’s speeches have been inscribed at the base of the monument, like “With malice toward none, with charity for all, with firmness in the right as God gives us to see the right, let us strive on.” 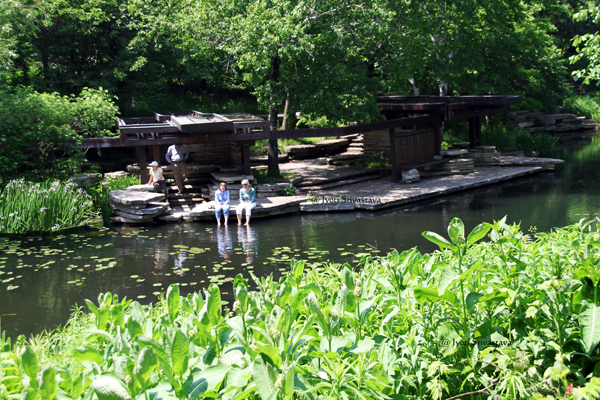 This site is a premier example of the Prairie Style of landscape architecture. Alfred Caldwell, a landscape designer, architect, teacher and poet, transformed an old Victorian Lily Pool in Lincoln Park into a “Sanctuary of Native Landscape”. Funded by the Works Progress Administration and completed in 1938. It possesses national significance in commemorating the cultural history of the United States. 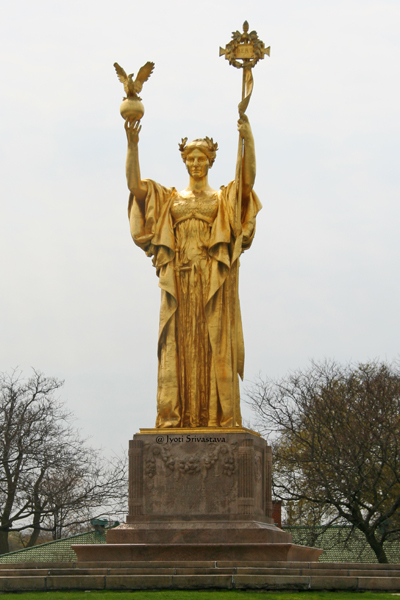 Statue of the Republic – by Daniel Chester French / Designated Chicago Landmark in 2003.

Commissioned by the B.F.Ferguson Monument Fund to commemorate the 25th anniversary of the 1893 World’s Columbian Exposition held in Chicago and the Illinois statehood centennial. The Republic statue at Jackson Park is actually a one-third reproduction of the original 65-foot-high sculpture, which dominated the World’s Columbian Exposition’s Court of Honor. Both the earlier sculpture and its later reproduction were both the work of Daniel Chester French. The figure has classical drapery and carries symbolic ornaments; a laurel wreath on the head, a shield with eagle, in her right hand is a globe with an eagle hovering over, and in her left hand is a lance crowned by a Phrygian cap – a sign of the French revolution. The intent was to express the republic of the United States and its form of government. 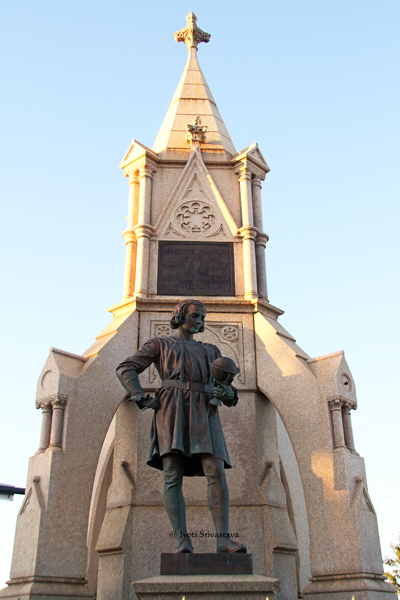 Believed to be Chicago’s first statue commemorating Columbus. A 71/2 foot bronze figure of Columbus portrayed as a young student of geography, globe in hand, stands on a stone pedestal at the front. The monument was originally dedicated in December 1892 to mark the 400th anniversary of his voyage. The Fountain has been moved a few times. It originally located on Washington Street in a plaza created by a light court of the former City Hall-County Building. In 1906, when the Old County building was razed it was moved to LaSalle Street. In 1909, it was moved to its current location, on East 92nd Street at South Chicago and Exchange Avenues. 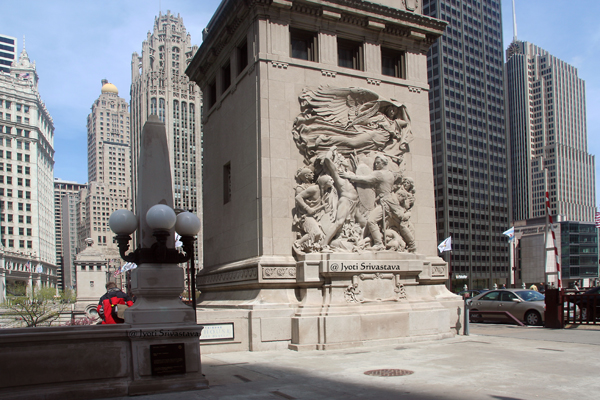 Fort Dearborn served as a major western garrison of the United States until destroyed during an Indian unrising in August of 1812. The fort, was named for U.S. Secretary of War Henry Dearborn, who served as the country’s major western military garrison until August 1812, when it was destroyed following an Indian uprising. A second fort, erected on the same site in 1816, was demolished in 1856. 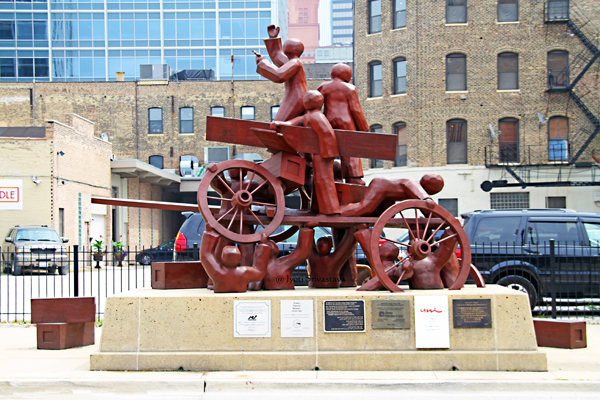 A decade of strife between labor and industry culminated here in a confrontation that resulted in the tragic death of both workers and policemen. Haymarket Memorial  by Mary Brogger marks the actual spot where the wagon used as the speaker’s platform stood on the evening of May 4, 1886. 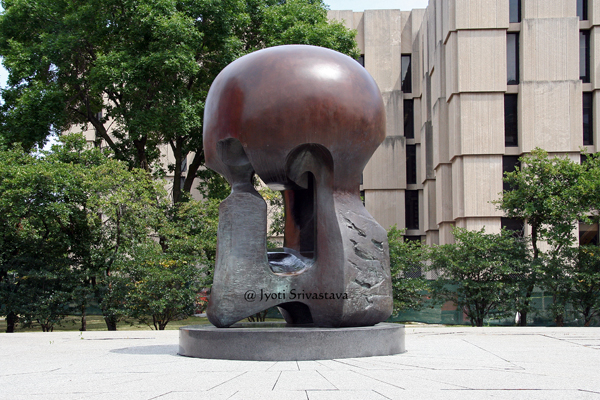 Site of the First Self-Sustaining Controlled Nuclear Chain Reaction.
Location: The campus of the University of Chicago, on Ellis Avenue,
between the Max Palevsky West dormitory and the Regenstein Library
Date Designated a Chicago Landmark: October 27, 1971.

The location commemorates the exact location where the Manhattan Project team devised the first nuclear reactor to produce the first self-sustaining controlled nuclear reaction. The sculpture by Henry Moore marks the site of world’s first nuclear reactor Chicago Pile-1 (CP-1). The sculpture is meant to conjure images of both a human skull and a mushroom cloud. It was erected for and dedicated at the celebration of the 25th anniversary of the splitting of the atom on the grounds by Enrico Fermi in December 2, 1942. Thus, it was dedicated at precisely 3:36 p.m. on December 2, 1967. 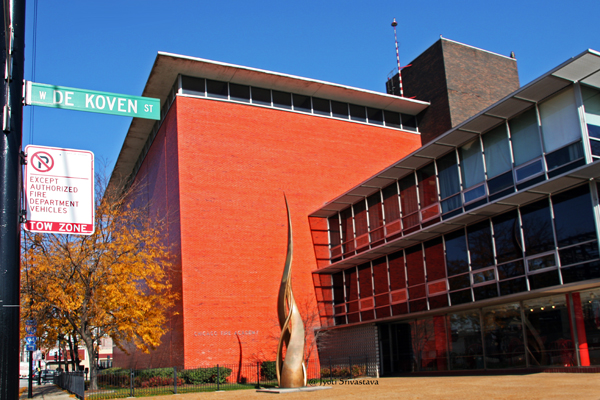 Site of origin of the Great Chicago Fire of 1871 / Designated Chicago Landmark in 1971.

Site of Origin of the Great Chicago Fire of 1871.
Location: Dekoven and Jefferson Streets
Date Designated a Chicago Landmark: September 15, 1971.

The Great Fire of Chicago, that lasted 2 days [8- 10 October 1871] began at this site. It destroyed about 4 square miles of the city; killed about 250 people, made 100,000 homeless. It leveled about a third of the city; destroying about 17,450 buildings. It destroyed about the entire core downtown of Chicago and most of the North side. Property losses are estimated at $200 million. A bronze sculpture of stylized flames “Pillar of Fire” by Egon Weiner was erected in 1961 at the point of origin of Chicago fire.

It was at the Sauganash Hotel in 1833 that the newly-formed Town of Chicago voted to elect its first town trustees and where many of the town meetings occurred. During a brief period in 1837 when the building was not in operation as a hotel, it served as Chicago’s first theater. The Sauganash Hotel remained in almost continuous operation until it burned down in 1851.
The Wigwam, constructed on the same site nine years later, was home to the 1860 Republican National Convention. It was at this historic convention that Abraham Lincoln was nominated as the Republican candidate for president. His nomination and eventual election as the nation’s 16th President triggered a series of dramatic events surrounding the abolition of slavery and the secession of several southern states, ultimately culminating in the Civil War.