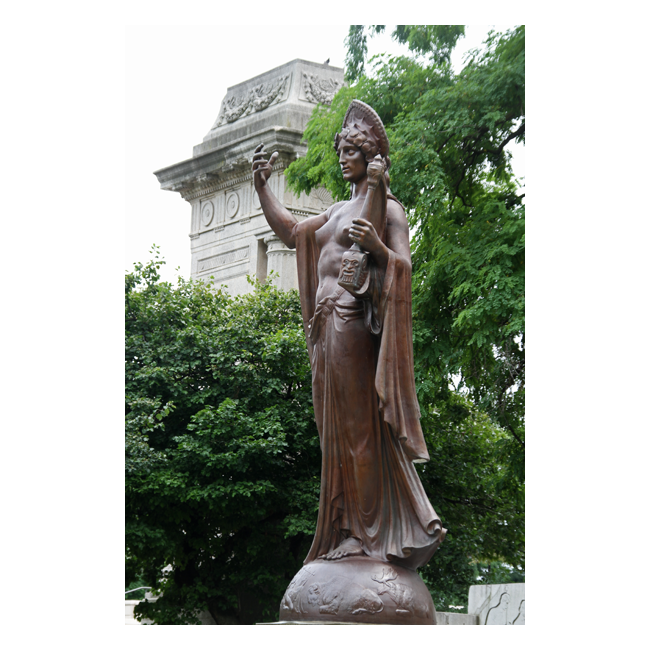 Location: Chicago’s Grant Park on the corner of Balbo and South Michigan Avenue, near the Hilton Hotel.

Commissioned by the B.F. Ferguson Monument Fund,
as a memorial to Theodore Thomas [1835-1905], first conductor of the Chicago Symphony Orchestra [CSO].

At the other side of the Memorial is the eco-friendly Summer Dance Floor was designed by Dan Peterman, 1997. 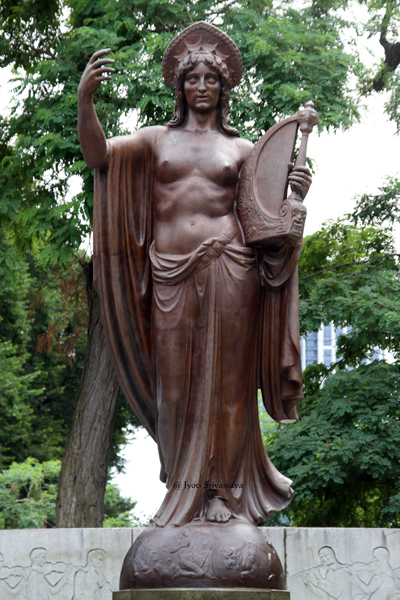 The bronze statue depicts the “Lady of Music, Art, Prose, Poetry and Drama”.

From the City of Chicago Official Tourism Website ..
The Spirit of Music is a memorial to Theodore Thomas [1835-1905], first conductor of the Chicago Symphony Orchestra [CSO]. German-born Thomas was a nationally respected violinist and conductor who settled in Chicago in 1889 to help establish the city’s first permanent orchestra. After his orchestra played in the Auditorium Theater for many years, Thomas achieved his dream of building Orchestra Hall, designed by architect Daniel H. Burnham. Theodore Thomas dedicated the new building in December of 1904, but died only a few weeks later.

The B.F. Ferguson Fund commissioned the sculpture which was erected and unveiled in the south garden of the Art Institute facing Orchestra Hall in 1924. Albin Polasek, an internationally renowned sculptor who had emigrated from Czechoslovakia, and American architect Howard Van Doren Shaw created the artwork. It featured a bronze figure of a muse that stood in front of a forty-foot long granite exedra and bench with a carved freize depicting Thomas and the orchestra members in relief. 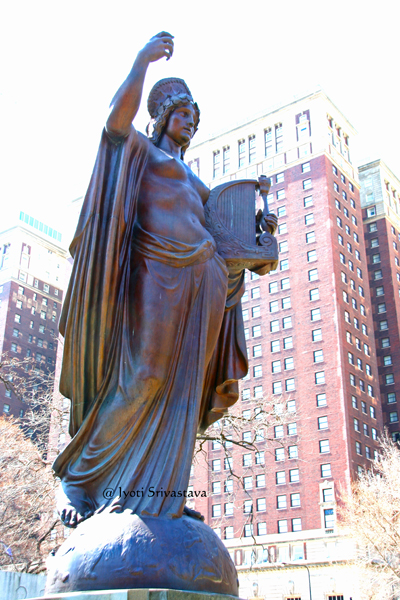 Sculptor ALBIN POLASEK [1879 -1965] was a Czech-American sculptor and educator. From 1917 to 1943 he headed the sculpture department at the School of Art Institute of Chicago [SAIC]. The Art Institute has given Polasek two-story gallery in the museum to complete his work.

Polasek’s 15 feet sculpture of personification of music combines both masculine and feminine features. He intended it to have “the majesty and sweep” of a symphony and to be “dignified yet simple, assertive but not bold… a feminine figure, but not too feminine.” The goddess figure has just struck a chord on her lyre.

The lyre has a small classical mask at the lower end. Polasek insisted that it was his own face that peered out from behind the mask.

The sculpture stands on a hemispherical base, which is embellished with reliefs illustrating the power of music. It has figure of Orpheus playing his lyre Chibiabos from Longfellow’s “Song of Hiawatha”; and animals listening.

Architect Howard Van Doren Shaw designed the wall and bench surrounding the sculpture. The relief figures of symphony orchestra was carved by Polasek. 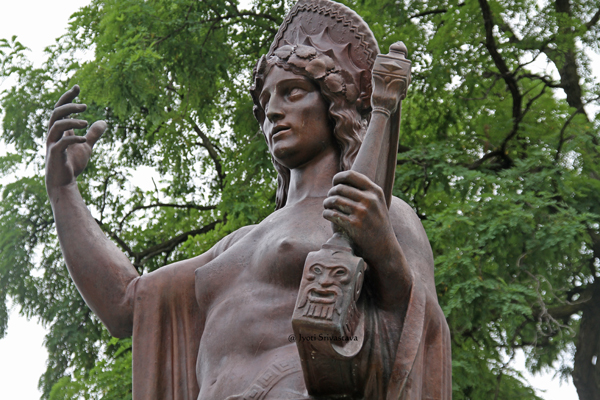 Notice the small classical mask at the lower end. Polasek insisted that it was his own face that peered out from behind the mask / Spirit of Music Statue – by Albin Polasek 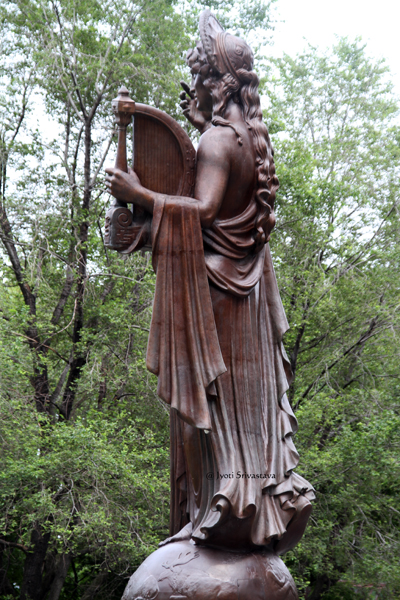 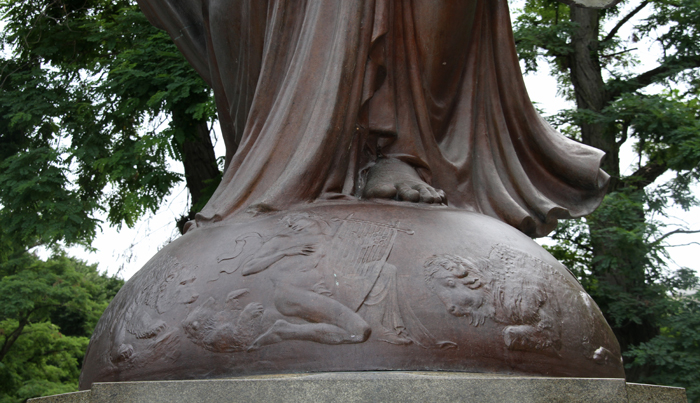 RELIEF ON HEMISPHERICAL BASE

The sculpture stands upon a hemispherical base,
with low relief figure of Orpheus playing his lyre, Chibiabos from Longfellow’s “Song of Hiawatha”singing, and animals listening.

In ancient Greek mythology, Orpheus was a legendary musician, poet, and prophet. The major stories about him are centered on his ability to charm all living things and even stones with his music.

The Song of Hiawatha is an 1855 epic poem in trochaic tetrameter by Henry Wadsworth Longfellow that features Native American characters. The epic relates the adventures of an Ojibwe warrior named Hiawatha and the tragedy of his love for Minnehaha. Hiawatha has two best buddies – Chibiabos and Kwasind.  Chibiabos was the best of all musicians, the sweetest of all singers. When he sang, the village listened.

Among the animals I see bears, deer and bison listening to music. 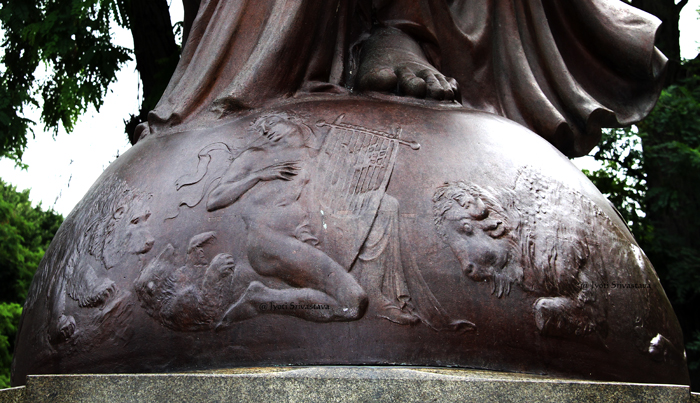 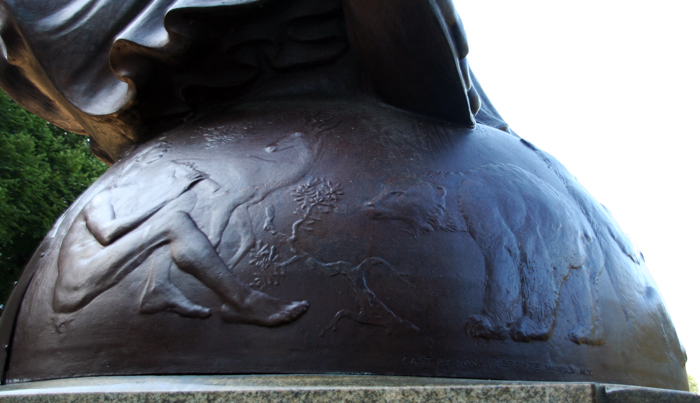 Chibiabos from Longfellow’s “Song of Hiawatha”singing and animals listening. / Spirit of Music Statue – by Albin Polasek

A marking reads.. “Cast by Roman Bronze Works. N.Y.” The Roman Bronze Works, now operated as Roman Bronze Studios, is a bronze foundry in New York City. Established in 1897 by Riccardo Bertelli, it was the first American foundry to specialize in the lost-wax casting method, and was the country’s pre-eminent art foundry during the American Renaissance (ca. 1876-1917). Notable works at the foundry includes:  “Atlas”  by Lee Lawrie [at Rockefeller Center, NYC]; Bronco Buster by Frederick Remington; and the Ulysses S. Grant Memorial by Henry Shrady at Capitol Hill in Washington, D.C. 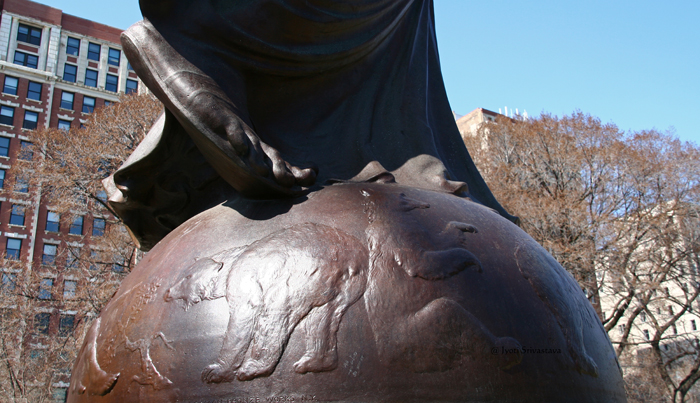 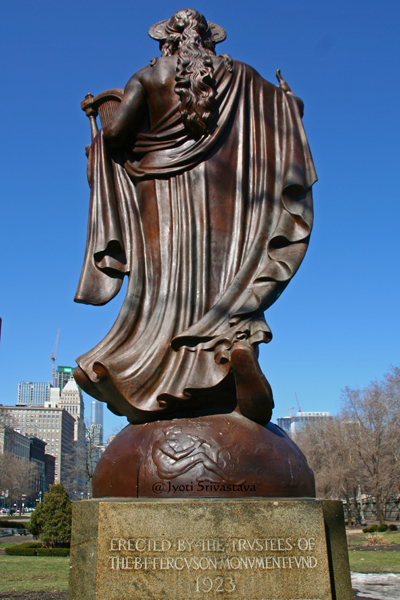 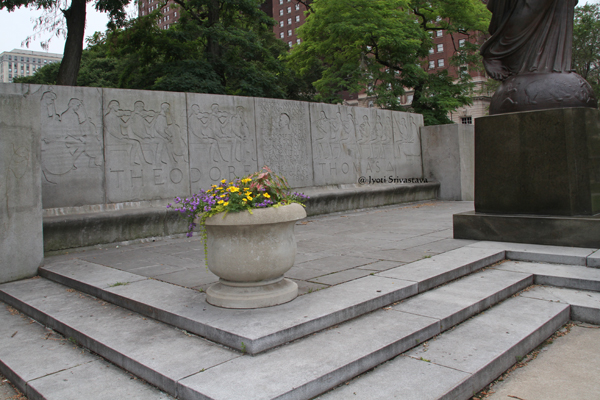 Howard Van Doren Shaw [1869–1926] collaborated with Polasek on the monument’s granite exedra and bench. The forty-foot-long wall behind the bronze figure, the exedra portrays members of the orchestra playing their instruments in sculptural relief, carved by Polasek. 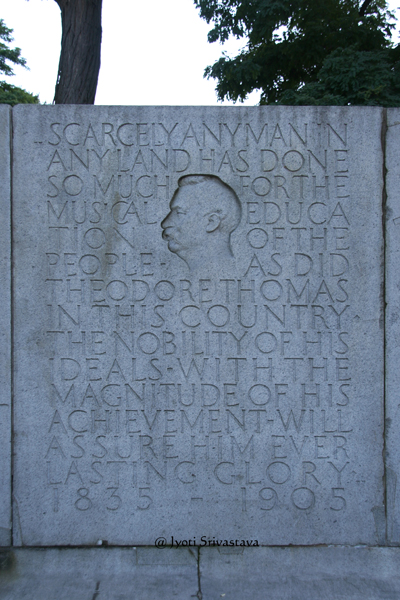 The engravings reads …
“Scarcely any man in any land has done so much about musical education of the people as did Thodore Thomas in this country.
The nobility of his deals with the magnitude of his achievement will assure him everlasting glory. 1835-1905.” 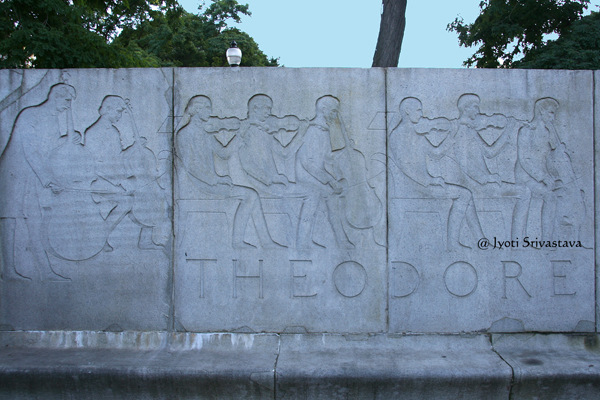 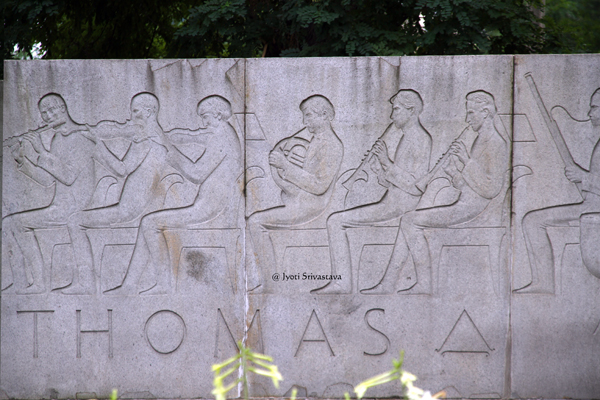 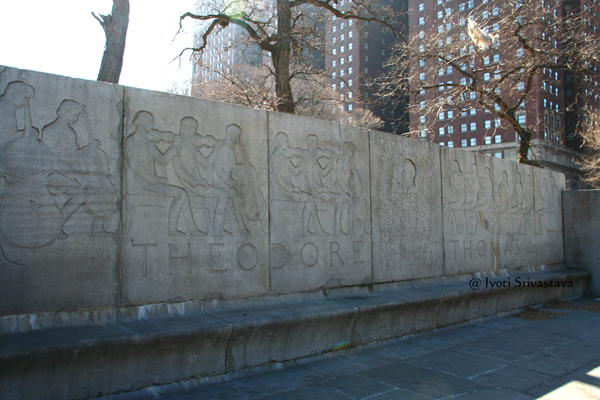 The sculpture has been moved to several different locations in Grant Park. It was first installed [in 1923] south of the Art Institute of Chicago, facing Orchestra Hall in 1923. In 1941, it was relocated when museum’s south garden underwent major renovations. At that time, the bronze figure was removed from its exedra and placed in front of a classically-designed peristyle near Randolph Street.  In 1953, the peristyle was demolished to make way for underground parking. Then the sculpture spent five years in storage.  In 1958, the bronze sculpture was moved again — still without its original backdrop — near the Buckingham Fountain. In 1991, it was moved to it’s current location, at Balbo Drive and Michigan Avenuem, and the exedra and bench were also reinstalled.  A new “Spirit of Music” garden was created surrounding the Memorial.

THE LOST and FOUND STORY

The Memorial has an interesting Lost and Found story. By the 1940s, when the sculpture was located near Randolph Street, the orginial granite exedra and bench had been separated from the bronze sculpture and placed in storage. In early 1990s, a lakefront jogger discovered pieces of the carved granite exedra that had been dumped amidst the riprap along the edge of Lake Michigan. The Chicago Park District soon retrieved the pieces, restored the sculpture and exedra and installed them in a new location at Balbo Drive and Michigan Avenue.

The Chicago Park District created a new Spirit of Music Garden surrounding the sculpture and in recent years this has become the venue for Summer Dance, a popular annual outdoor music and dance series. 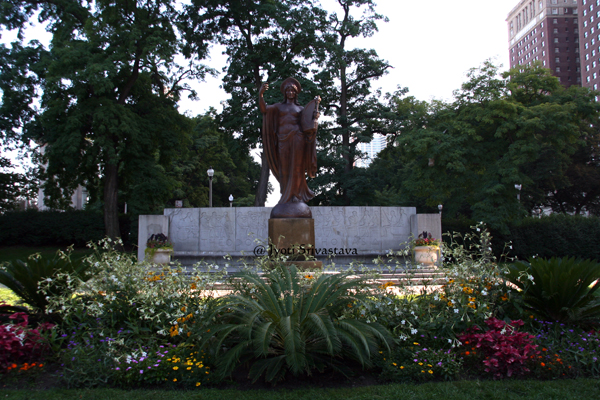 THE SPIRIT of MUSIC GARDEN

Chicago Park District [CPD] worked with Chicago’s Department of Cultural Affairs and Department of General Services [DCASE], and the Mayor’s Office of Special Events to create a garden that fulfilled program needs as well as a garden that was a unique draw in and of itself. The Park District uses a combination of annuals and perennials that will guarantee a splash of color throughout the summer. The garden layout incorporates a geometric design that pulls the visitor into the center of the garden, where they can easily access all other areas. Classic-looking wooden umbrellas, tables and chairs circle the center of the garden, encouraging people to sit and enjoy their surroundings. 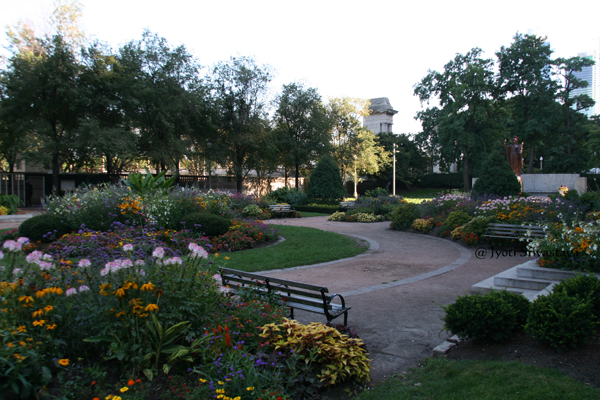 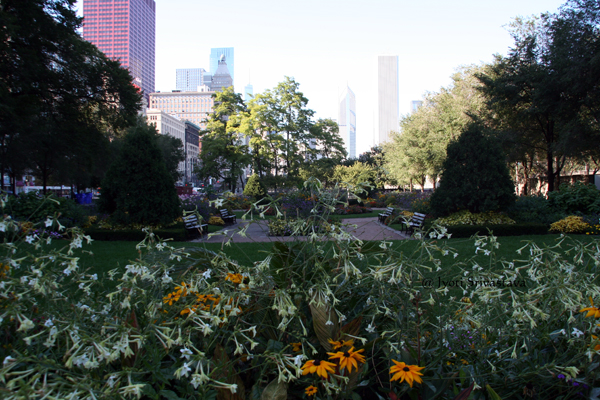 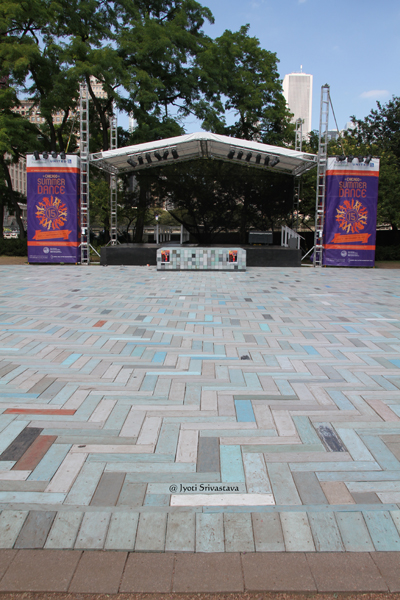 The summer dance floor was designed by Dan Peterman, 1997.
By making this dance floor out of recycled plastic, cell foam and other reusable materials,
he showed that art can be eco-friendly and utilitarian at the same time. 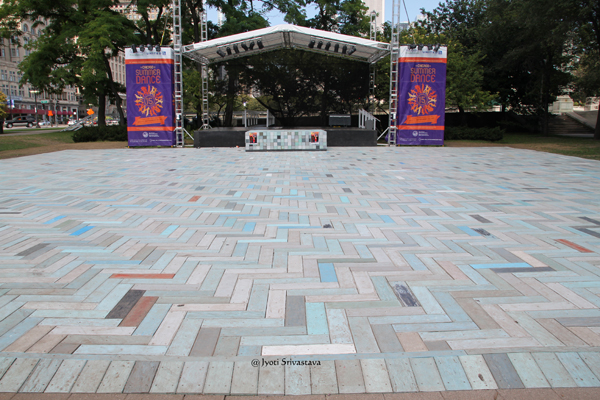 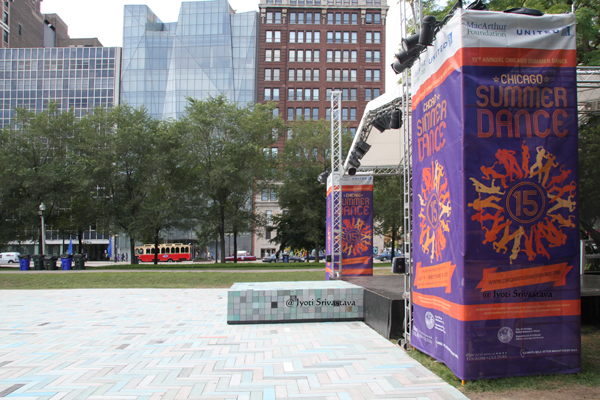 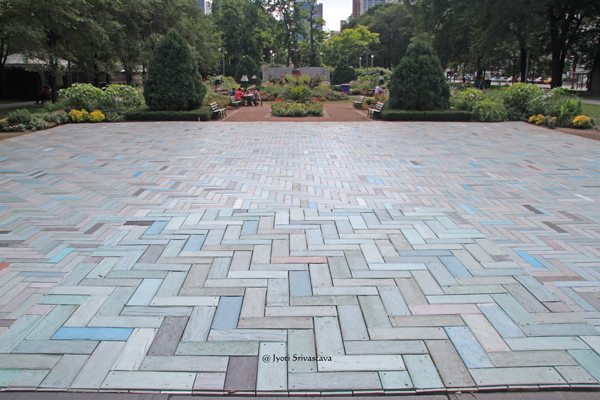