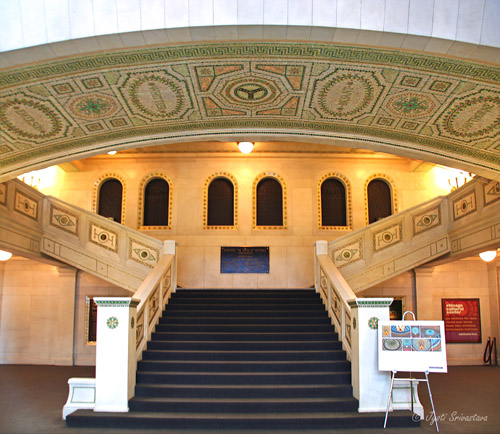 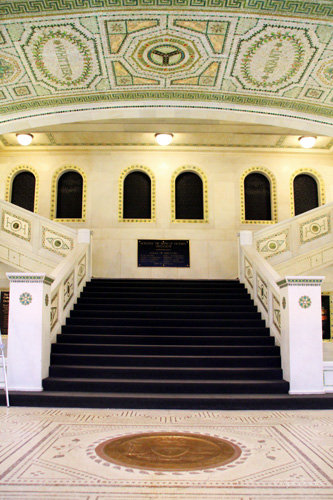 Main lobby with tessellated floor and bronze seal:  When we enter from the Washington Street – south side – we see ornate Roman inspired architecture.   There are three pairs of glass doors leads us to the  lobby – 45 feet deep and 53 feet wide – with tessellated floor and the Grand Stairway. The entrance has Roman arches with exuberant ornamentation.   In the center of the tessellated mosaic, right at the foot of the grand stairway – is the seal of the city of Chicago – embedded is the form of a large circular bronze disc.  It reads – City of Chicago incorporated  4th March 1937. In the center is motto of the city, “Urbs in Horto”.  It is important to note that only recently the carpet on the floor has been removed, revealing the bronze seal and the floor mosaic. 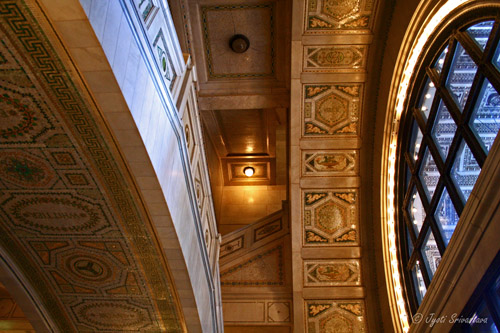 Double arches engraved with names of great writers:  As we enter, there are two  beautiful Roman arches – one high, one low – and these have names of famous thinkers and authors engraved on them.  The first arch has names of six classic authors Homer, Plato, Cicero, Livy, Horace, Virgil, Horace and Livy. The second arch, closer to the Grand Staircase, has Y-symbol in the center and names of six American authors engraved around it – Longfellow, Emerson, Whittler, Bryant, Hawthorne and Irving. 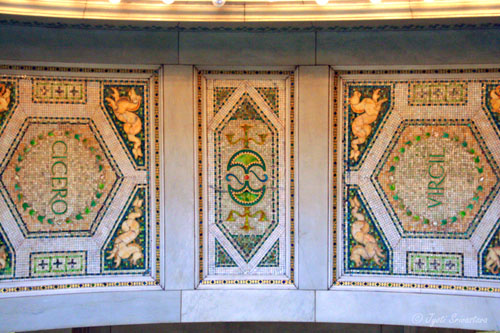 The arch at the entrance has names of six classic authors
Homer, Plato, Cicero, Livy, Horace, Virgil, Horace and Livy. 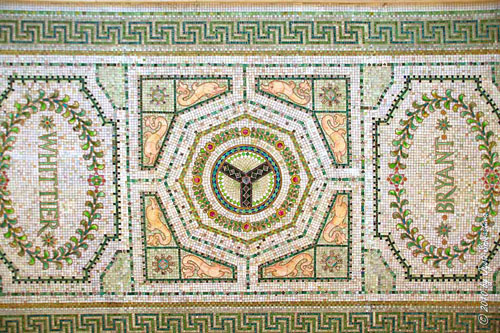 The arch at the staircase entrance has Y-symbol in the center and names of American authors
Longfellow, Emerson, Whittler, Bryant, Hawthorne and Irving.

Grand Staircase with Cosmati work:  The main highlight of the Washington Street entrance is the Grand Staircase!!  It is made of  Italian Carrara statuary marble and has with sparkling Cosmati work [mosaic inlays].  The mosaics were designed by Robert C. Spencer, Jr. of the firm Shepley, Rutan and Coolidge. The mosaics were executed in the Tiffany Studio by J. A Holzer. The bright green is Connemara marble of  County Galway, Ireland. 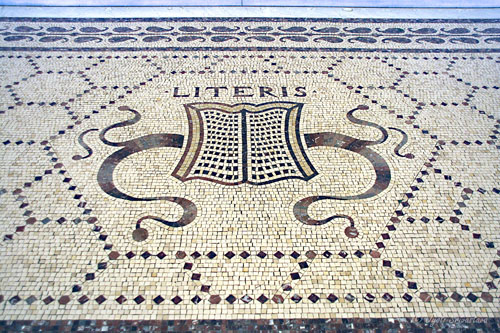 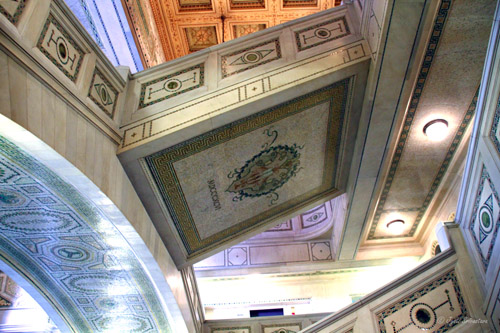 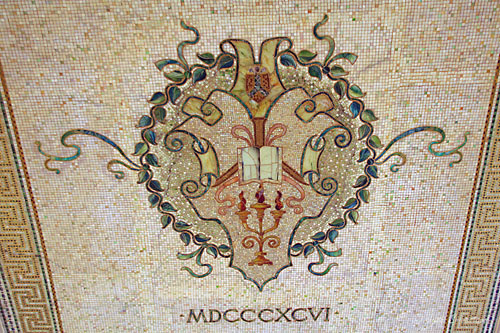 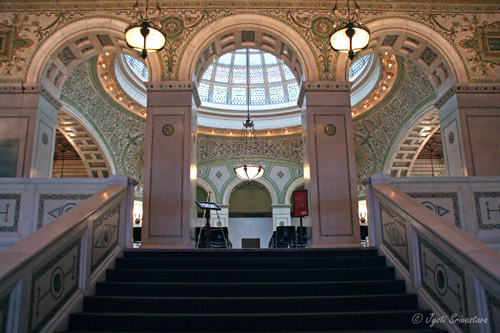 Preston Bradley Hall:  The Grand Staircase leads to the most famous attraction of the Chicago Cultural Center – Preston Bradley Hall – on the third floor. This was earlier the Delivery Room of the library. Its main highlight iss the largest Tiffany Dome in the world. Most tourists come to this. I am devoting a separate post for this. 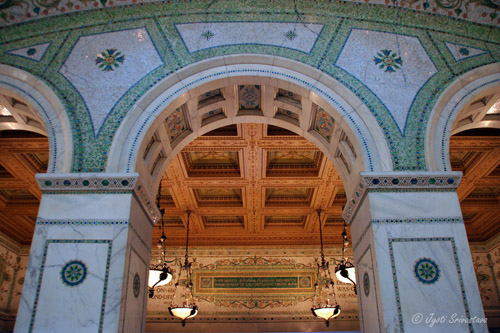 Looking south [at the outer hall] from Preston Bradley Hall

The Outer Hall [of the Preston Bradley Hall] : Since the Preston Bradley Hall grabs most of the attention, people sometimes miss noticing the ornate outer hall is the coffered ceiling, with tablets embossed on them. These tablets have popular quotes from famous people like Victor Hugo, Issac Barrow, John Milton and Francis Bacon. 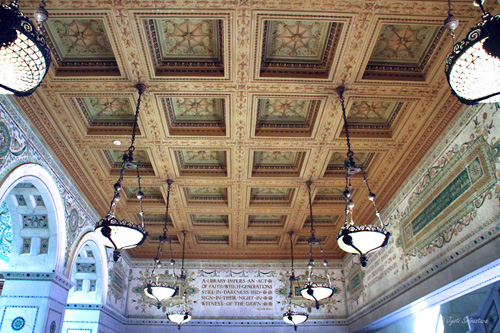 Outer Hall – with coffered ceiling and tablets with popular quotes of famous people. 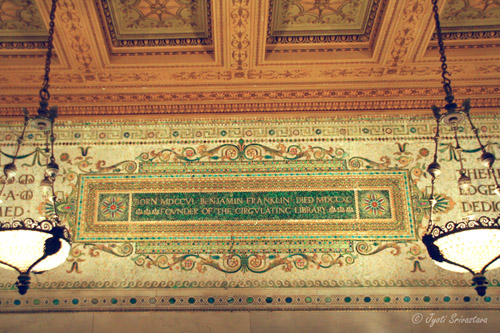 On either side of the above testimonial are these quotations..

A library requires an act of faith which generations, still in darkness hid, sign in their night in witness of dawn.
-Victor Hugo

He that loveth a book will never want a faithful friend, a wholesome counselor, a cheerful companion, an effectual comforter.
-Issac Barrow

A good book is the precious life-blood of the master spirit, embalmed and treasured up on purpose for a life beyond life.
– Milton

The real use of all knowledge is this: that we should dedicate that reason which was given us by God for the use and advantage of man.
– Bacon