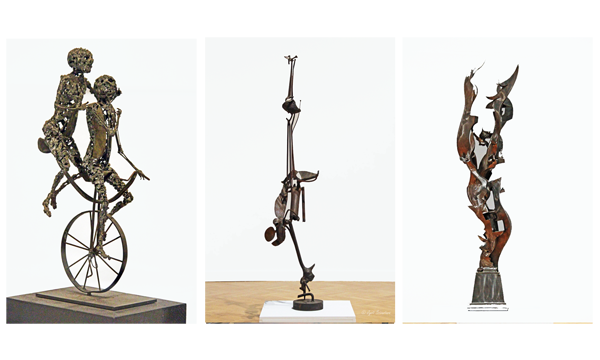 Curator: Daniel Schulman, Director of Visual Arts at DCASE
where DCASE is Chicago Department of Cultural Affairs and Special Events. 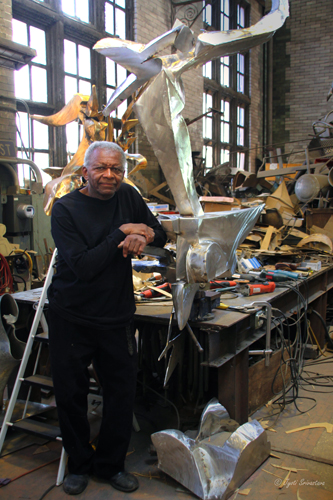 Richard Howard Hunt in his Studio

Chicago celebrates internationally acclaimed Chicago’s own virtuoso metalsmith Richard Howard Hunt, with a review of his sixty years of sculpture making!  Richard Hunt has the distinction of not only the highest number of public sculptures in the city, but has more public commissions than any other artist in the country. His abstract monumental sculptures – made from heavy industrial materials like iron and steel – seem weightless as if performing ballet in the space!

In Chicago, Richard Hunt’s works can be easily seen all over the city in parks, airports, community centers and sidewalks, like: “Freeform” at State of Illinois Building, “Illinois River Landscape” at James R. Thompson Center, “Flight Forms” at Midway Airport, “Jacob’s Ladder” at Carter Woodson Regional Library, “Slabs of the Sunburnt West” at University of Illinois, Chicago campus, “Why” at University of Chicago, “Building Growing Sculpture” at Chicago State University, “Eagle Columns” at Jonquil Park, “Large Planar Hybrid” & “Outgrown Pyramid II” [both] at the Nathan Manilow Sculpture Park, and “Special Olympics Memorial” at Soldier’s Field. Just outside the Chicago Cultural Center, at Randolph Street is his “We Will”, which is a gift of the Heritage Building to the City of Chicago!

His work can be seen not only in Chicago, but in many cities across the country. He has about 132 sculptures in 74 cities, spread over 23 states.

Hunt is the recipient of numerous awards and honorary degrees. He was appointed by President Lyndon Johnson as one of the first artists to serve on the governing board of the National Endowment for the Arts. He also served on boards of the Smithsonian Institution. In 1971, Richard Hunt became the first African-American sculptor accorded a retrospective exhibition at the Museum of Modern Art [MOMA] in New York. Throughout the years he has received Guggenheim, Ford and Tamarind fellowships, Logan and Palmer prizes. In 2009 was honored with a Lifetime Achievement Award from the International Sculpture Center. This year, in 2014, he received inaugural Fifth Star Award by the City of Chicago as an exemplary Chicago artist with significant contributions in arts and culture.  Mr. Hunt work is represented in major museums and collections internationally, including  such major institutions as the Art Institute, the National Gallery, the Whitney Museum of American Art and the Metropolitan Museum of Art.

It is befitting that the city honors its exemplary native artist: Richard Howard Hunt! The exhibition: “Richard Hunt: Sixty Years of Sculpture” does exactly that! The venue couldn’t be any better: Chicago Cultural Center or “People’s Palace”, as Hunt is a public sculptor. The exhibition [as all exhibitions at Cultural Center] is free and open to all as much as most of Hunt’s monumental sculptures! The timing is perfect too! Next year, in 2015, Richard Hunt will celebrating his 80th birthday! The exhibition is a wonderful tribute to his 60 years of  bringing abstract monumental sculptures to a broad public! The brilliant exhibition is curated by Daniel Schulman, Director of Visual Arts at Chicago Department of Cultural Affairs and Special Events [DCASE]. This is the major retrospective of Hunt’s work since his landmark exhibition in MOMA in 1971.

Richard Hunt was born on September 12, 1935 in Chicago’s South Side Englewood community. His parents, Etoria, a beautician and librarian and Howard, a barber had settled in Chicago during the Great Migration. From an early age he began showing enthusiasm in artistic disciplines such as drawing and painting His interest in sculpture grew as he got older. He developed his skills at the Junior School of the Art Institute and later at the Art Institute of Chicago.

Some of his early works were figurative, but he soon transitioned into abstract. In fact he belongs to one of the first group of Chicago sculptors who along with John Henry, Jerry Peart, Jerald Jacard, Edwin Strautmantis and Stephen Urry, started practicing monumental abstract sculptors. While many of the early modern sculptors of Chicago left the city, Hunt decided to stay here. Hunt belongs to the Abstract expressionism movement of the 1950s when he was in his 20s. This was quickly superseded by the Pop-Art of the 60s. But Hunt stayed with his fluid abstract forms. His work draws inspirations from flight of birds, or branches of trees, but rather than capturing the exact motion, he captures the feel of such an experience. His studio – a two-story brick building built in 1909 as an electrical substation for the Chicago railway system – gives him plenty of space to experiment and produce monumental sculptures. He uses a lot of salvaged materials and assembles them into fluid organic forms, bringing life to everyday industrial materials!

The exhibition is a collection of maquettes, scale models, small scale and some monumental sculptures, ranging from 1950s to 2014. One of the highlights is his early figure sculptures, encased securely in rectangular glass box. The earliest I saw was from years 1954 and 1955! These are some of his rarely seen early works. It exhibition traces his transition from figurative to abstract! Almost all sculptures are loan from the artist! When there, don’t miss the very interesting video on the artist!
Kudos to the sculptor and kudos to the curator for a wonderful exhibition! 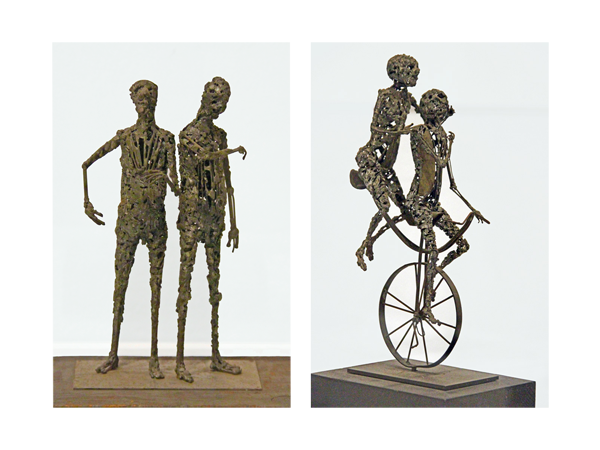 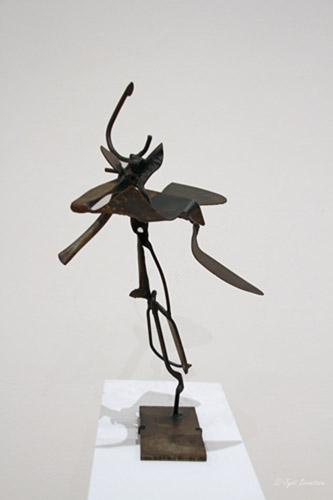 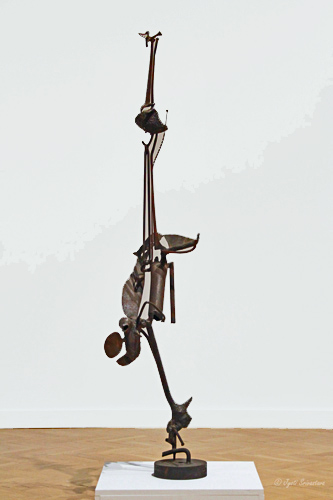 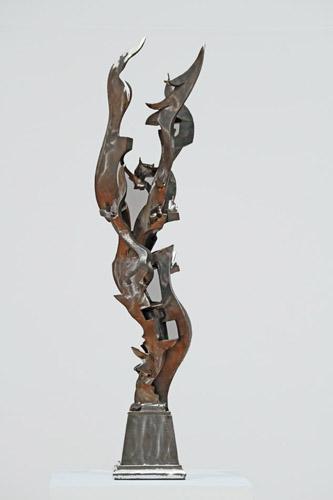 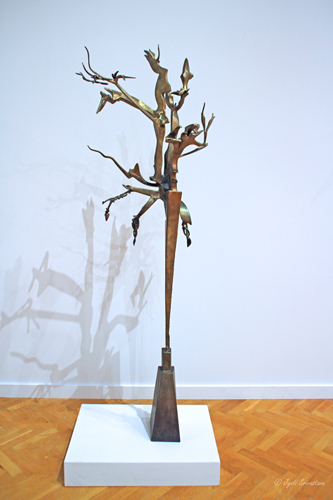 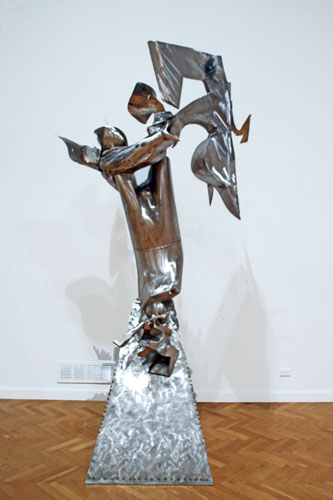 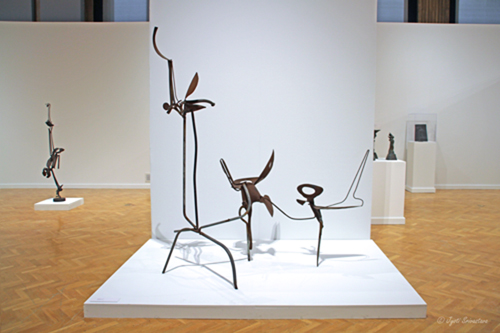 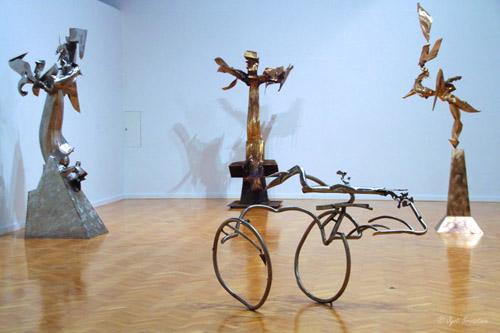 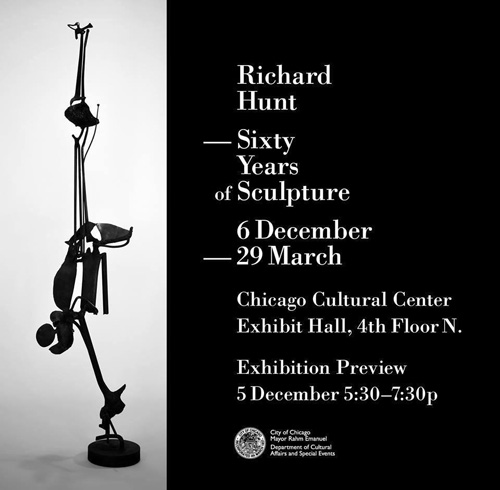