Chicago Celebrates 2017 As The Year of Public Art 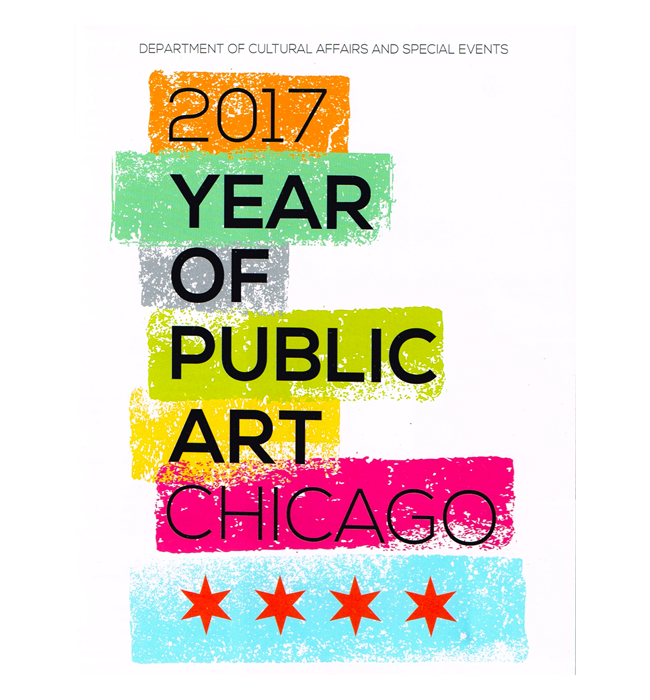 Mayor Rahm Emanuel and the Chicago Department of Cultural Affairs and Special Events [DCASE] have designated
2017 the “Year of Public Art,”
with plans for special community projects, art festival, youth programs and much more.

The Chicago Public Art Collection includes more than 500 works of art exhibited in over 150 municipal facilities around the city, such as police stations, libraries, and CTA stations. The Collection provides the citizens of Chicago with an improved public environment and enhances city buildings and spaces with quality works of art by professional artists.

“We have more than a century of public art; art that hasn’t just hung there willing to be experienced but that’s gone out into the streets and touched the daily lives of Chicagoans.”
– Thomas Dyja, Chicago historian.

In the words of DCASE Commissioner Mark Kelly,
“We are a city with incredible public art. Yes, it includes sculptures and monuments – but it’s so much more. It’s the city’s creativity on display for everyone to view, to interact with and to draw inspiration from. Art that invites you in – that encourages you to respond and to engage.”  Commissioner Kelly further adds.. “We see Chicago transformed everyday by different kinds of public art. We see it in the design of our infrastructure, as our transit stations and bridges take on exciting shapes and designs through inspired collaborations between artists and architects. We see it in our parks and public spaces, such as Chicago Riverwalk, a bustling waterfront filled with activity, from restaurants and live performances to pyrotechnic waterfalls. We see it in Buckingham Fountain, an engineering innovation and sculptural masterpiece in its time that continues to inspire and delight with water shows and playful illumination. We see it in the 606, a decommissioned industrial rail line that was brought back to life as a living work of art… In many ways, Chicago is already defined by art and innovative spirit.” 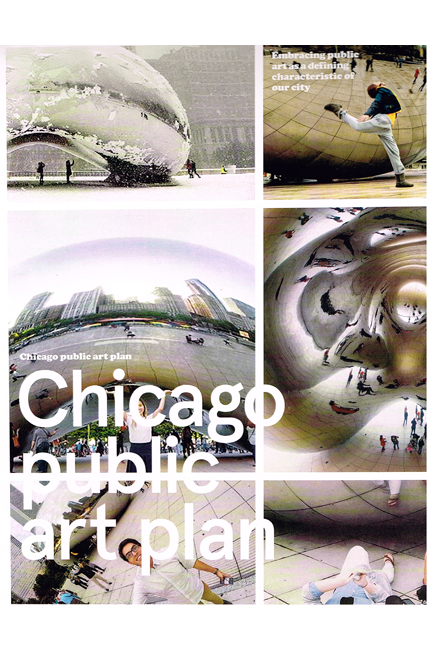 One of the biggest highlights of the celebration of 2017 as the Year of Public Art [YOPA] in Chicago, is the unveiling of the Chicago Public Art Plan. It is authored by DCASE, that is Chicago Department of Cultural Affairs and Special Events. DCASE is dedicated to enriching Chicago’s artistic vitality and cultural vibrancy. It includes fostering the development of Chicago’s non-profit arts business; provide a framework to guide the city’s future cultural and economic growth, via the Chicago Cultural Plan of 2012, marketing the city’s cultural assets to a worldwide audience, and presenting high-quality, free and affordable cultural programs for residents and visitors.  DCASE also administers the City’s Percent-for-Art Ordinance established in 1978, which stipulates that 1.33% of the cost of constructing or renovating public buildings will be used for public art.

The plan is largely being distributed digitally, and uses PDF scrolling format. It is typeset in Apercu and Cooper Black, the latter developed by Chicago type designer Oswald Bruce Cooper in 1922.

A letter from Mayor Rahm Emanuel says..
“I am proud of the incredible creativity shown by Chicago’s own artists, of the artwork that made Chicago a destination of everything that makes Chicago a great place to explore and discover.” The Mayor further adds.. “Yet now more than ever we need a vision for what it will take to energize and inspire ongoing support for public art, to keep Chicagoans moving forward as we advance into the next generation.”

Some Activities in Chicago’s Year of Public Art

Chicago is celebrating the 50th anniversary of two of the most iconic artworks:  the Picasso in Daley Plaza, and the Wall of Respect, which once stood at 43rd Street and Langley Avenue, on Chicago’s South Side.  These two pieces forever changesd how artists and residents saw and gave menaing to art in public square. 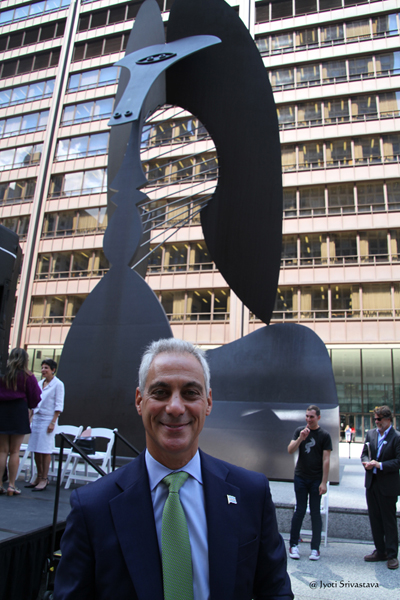 Chicago Mayor Rahm Emanuel / At the restaging of the 1967 Chicago Picasso dedication at Daley Plaza in August, 2017.

50th Anniversary of Chicago Picasso and re-staging of the original dedication.

“Chicago Picasso” was dedicated on Daley Plaza on August 15, 1967.  The year 2017 marks its 50th anniversary.  The city celebrated the anniversary with a re-staging of the original dedication.

Mayor Rahm Emmanuel said.. They call this piece “Everyone’s Picasso,” because it belongs to all of us. Chicago’s Public Art is a reminder of our shared history of the Great Migration, of the Haymarket Riot, of the city that rose again from the ashes of the Great Chicago Fire. Picasso’s gift to the people of Chicago inspired so many artists to follow his footsteps. Standing right here you can see a Dubuffet, and a Miro. We can look across the city and see Chagall’s mosaic, to Calder’s “Flamingo”, to Anish Kapoor’s “Cloud Gate”, to Magdalena’s “Agora”, to art in our CTA stations, our neighborhood parks, our libraries and along Lakeshore Drive. They are not just Chicago’s legacy of the past, they are prologue of Chicago’s future.

For more on the restaging of the 1967 Chicago Picasso dedication  click here.. 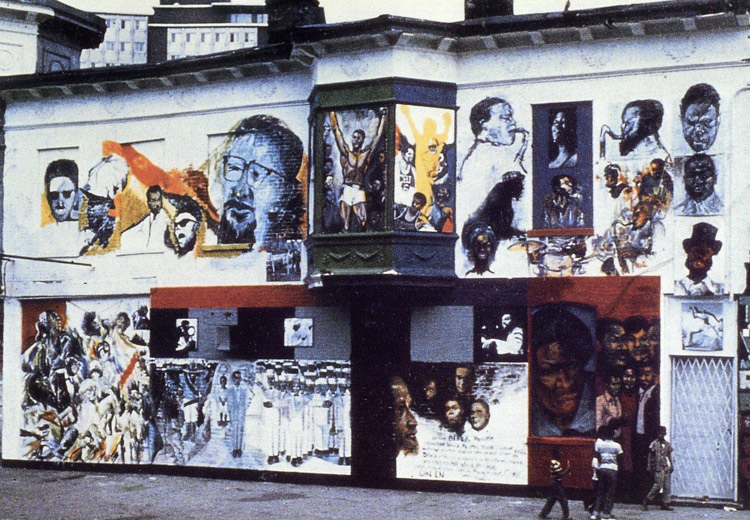 50th Anniversary of the Wall of Respect – Power of Black Arts Movement.

The “Wall of Respect” was a mural first painted in 1967. It was an example of the Black Arts Movement, an artistic school associated with the Black Power Movement.  The mural represented the contributions of designers, photographers, painters, and others, notably Chicago muralist William Walker. The work comprised a montage of portraits of heroes and heroines of African American history painted on the side of a building at the corner of Chicago’s 43rd Street and Langley Avenue, an area called the Black Belt. Notable images included Martin Luther King, Jr., Nat Turner, Elijah Muhammad, Malcolm X, Muhammad Ali, Gwendolyn Brooks, W.E.B. Dubois, Marcus Garvey, Aretha Franklin, and Harriet Tubman. After fire damaged the building it was painted on in 1971, the Wall of Respect was torn down.  Today, the site has no plaque, no marker to indicate the existence of this significant mural.   Although largely forgotten by the mainstream art world, the Wall of Respect continued to be an important cultural reference point for local community members and the subject of scholarly inquiry.

In the Year Of Public Art, new light was shone on the significance of Wall of Respect. Chicago Cultural Center was venue for exhibition –  “The Wall of Respect: Vestiges, Shards and Legacies” curated by Romi Crawford, Abdul Alkalimat and Rebecca Zorach. The exhibition chronicled how the Organization of Black Arts and Culture – a collection of 14 designers, photographers, painters and others – designed and produced a seminal mural for and within Chicago’s Black South Side communities. There were group discussions on the significance of the mural in the Black Arts Movement.

The groundbreaking work had soon become a catalyst for mural art throughout the city. In Pilsen, Mexican mural tradition was adapted to large scale works on buildings, and railroad embankments. In recent years, Wabash Arts Corridor has become an outdoor museum of large scale street art murals –  or Big Wall murals. 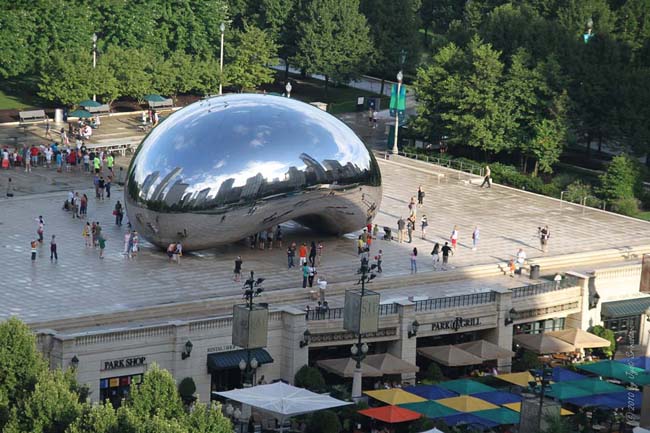 The Cloud Gate, aka The Bean – by Anish Kapoor / Millennium Park, Chicago.

“The Cloud Gate” at Millennium Park, also known as “The Bean,” is widely recognized as one of the greatest public art pieces in the world.  It is the must-see destination for residents and visitors alike. On October 17, the Bean had a special guest, it’s sculptor Anish Kapoor, who came to see it for the first time since it was completed in 2006. The sculpture was Kapoor’s first public outdoor work installed in the United States.  . Kapoor received an award for his contribution to the arts in Chicago. 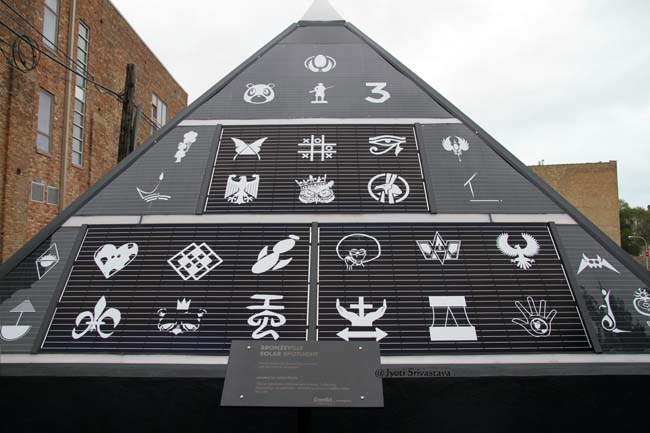 To celebrate the YOPA, City of Chicago has commissioned many of local artists to create new sculptures, murals and other public artworks art projects to each of the 50 wards in the city. It represents a $1 million investment in artist-led community projects. The citywide initiative is a collaboration between DCASE, the Department of Transportation, Chicago Park District, Chicago Public Library, Chicago Transit Authority and other departments to bring more art into public spaces. “The Year of Public Art is a celebration of the lasting contributions the arts make to communities across Chicago” said Mayor Rahm Emanuel. “In every neighborhood in Chicago there are talented artists, working across all mediums, who can add to the cultural fabric of their communities. The 50×50 Neighborhood Arts Project is a $1 million investment in Chicago’s neighborhoods, building on Chicago’s legacy of public art and enabling local artists to share their work with the world.”

DCASE is partnering with Mayor Emanuel’s One Summer Chicago and the Chicago Department Family and Support Services to create Public Art Youth Corps. The paid interns have been matched with community organizations to work on public art projects in neighborhood across the city. 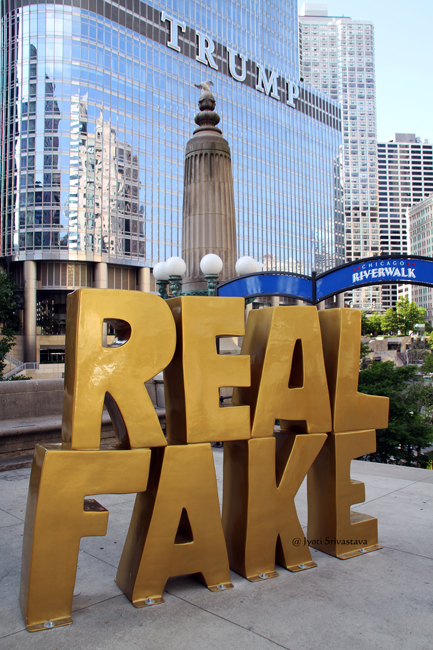 Chicago Riverwalk – A new urban park in the city. 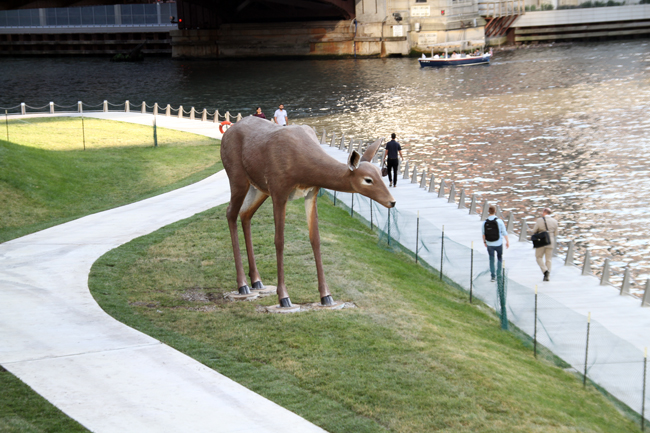 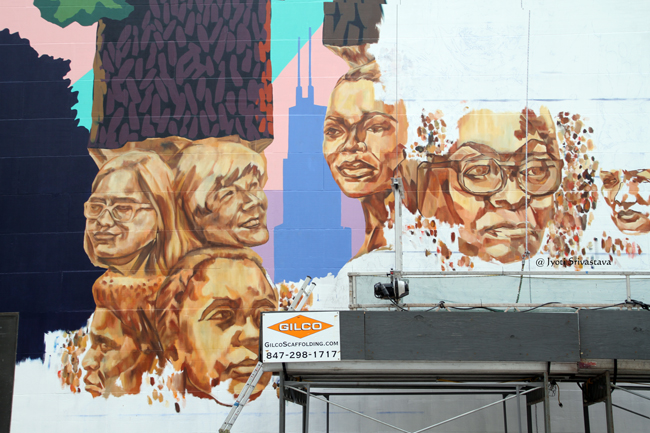 Work is in progress on a large-scale mural on the Chicago Cultural Center building by internationally renowned artist and MacArthur Fellow Kerry James Marshall. The mural will honor 20 women who have shaped the city’s vibrant arts and culture landscape. When completed, the 132-foot by 100-foot mural will be the largest artwork he has ever designed or created. The mural is funded by Murals of Acceptance, whose goal is to bring art to all people in a free public setting. The mural is on the building’s Garland Court façade, between Washington and Randolph Streets.

“Kerry James Marshall is one of our nation’s most acclaimed and important artists—and this mural for “The People’s Palace” is a true gift to the people of Chicago,” said DCASE Commissioner Mark Kelly. “The City of Chicago was thrilled to celebrate Kerry at the Fifth Star Honors this summer – and two of the women represented in his mural are past Fifth Star honorees: Lois Weisberg and Sandra Cisneros.” The 20 women represented in Kerry James Marshall’s mural are a who’s who of Chicago’s arts and culture community like Gwendolyn Brooks, Margaret Burroughs, and Oprah Winfrey. 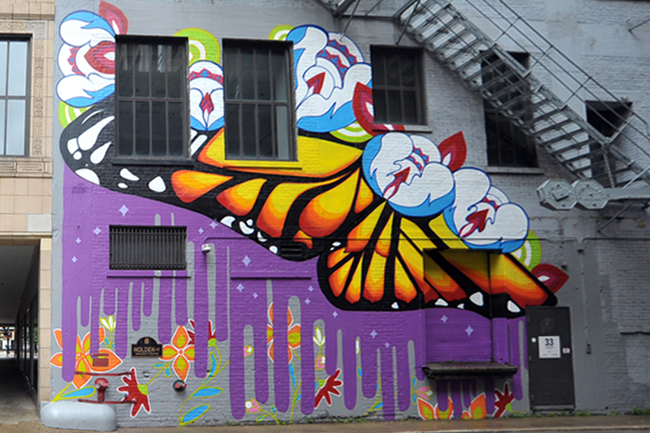 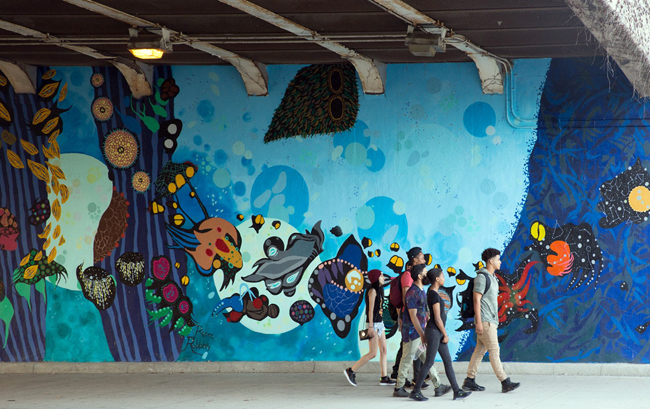 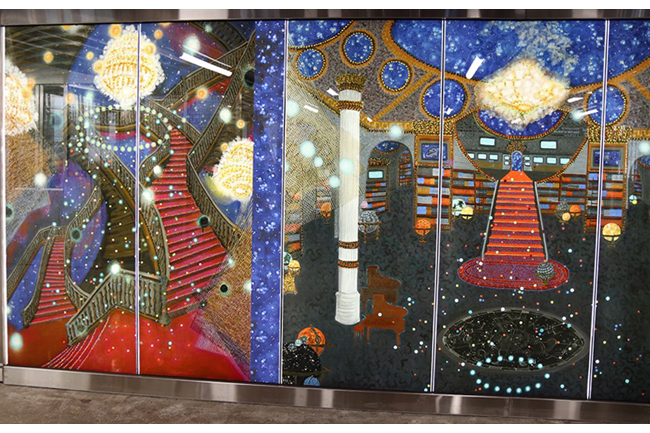 Since 2011 the CTA’s collection of public art has undergone its largest expansion ever. It now has more than 60 pieces of art exhibited at over 50 stations.  These artworks –  mosaics, sculptures and paintings – are by nationally and internationally acclaimed artists. The newest works of art added to this collection are the result of recently completed major project work to either rehabilitate an existing rail station or build a new station. These are part of CTA Art-in-Transit program and the funding comes from Federal Transport Administration.

Some new additions in CTA Art-in-Transit program, in the year 2017 include artwork at Wilson street [Red Line], Washington/Wabash Loop Elevated station and work-in-progress at 95th/Dan Ryan station [Red Line]. The artworks at Washington/Wabash station – which serves Chicago Cultural center, Millennium Park and Jeweler’s Row – features a striking architectural “skeletal steel” canopy, and also a new public artwork created especially for the station by Chicago-based artist Michiko Itatani. Two large art glass panels  – Cosmic Wanderlust 1 & 2 – reflect on human history and culture of the past, present and future.  Artwork on Wilson station is by internationally acclaimed artist, designer and engineer Cecil Balmond OBE. The artwork celebrates 1920’s Art Deco design, a style found in Uptown’s historic architecture, while the name of the artwork Arpeggio refers to an element of jazz, another artistic form closely associated with the history of neighborhood.

For the Year of Public Art, CTA has also partnered with DCASE to install illuminated light boxes later at select rail stations. The illuminated lightboxes appear at the Loyala Red Line, and the Central Cicero, Indiana, 43rd and King Drive stations along the Green line. 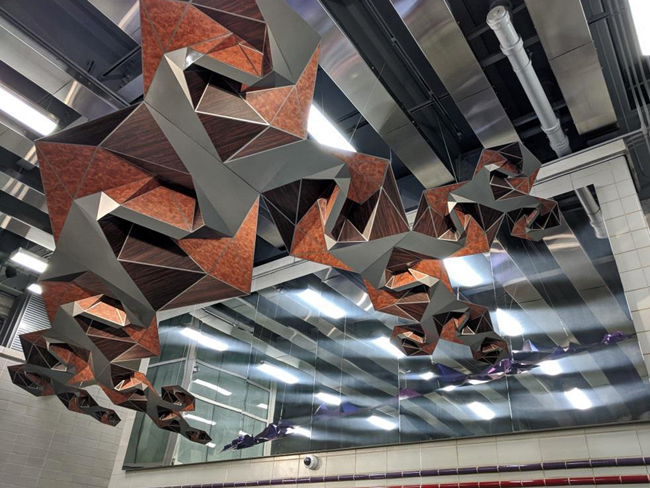 I began with the words of Chicago historian Thomas Dyja . Now I end with his words.. Chicago has led the nation in making important works of public art accessible and visible. Apart from projects funded by DCASE, many other Many publicly and privately funded art projects have contributed to making 2017 as the Year of Public Art in Chicago.