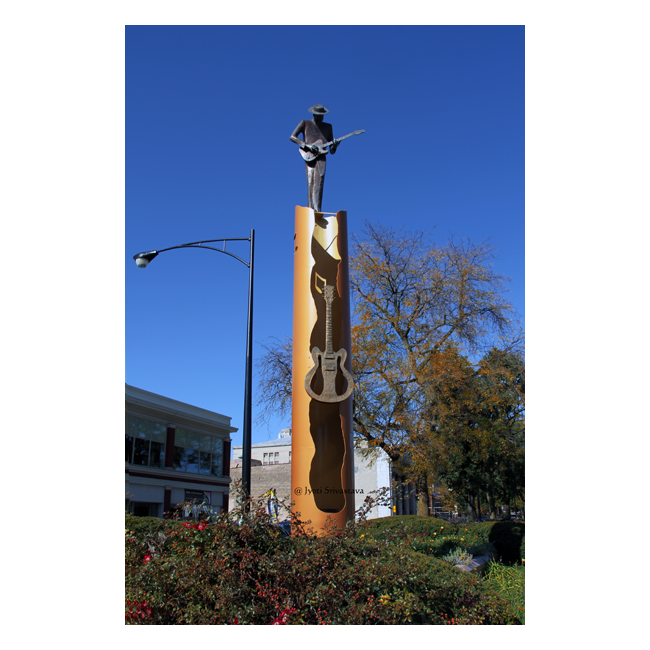 Blues has always intrigued me. I love Chicago Blues! but when I say that, I don’t mean that I’m an aficionado with an in-depth knowledge of various songs, singers and their different styles. I only mean that I love whatever I’ve heard. If I have to spell out a few names, it would be B.B. King, Buddy Guy, Muddy Waters, Willie Dixon, Howlin’ Wolf, John Lee Hooker, Koko Taylor and a few others. But beyond that, I’m totally blank. I couldn’t tell Memphis Blues from Delta Blues. but I love it enough to decide to explore the Blues District , that is the 47th street, Chicago. 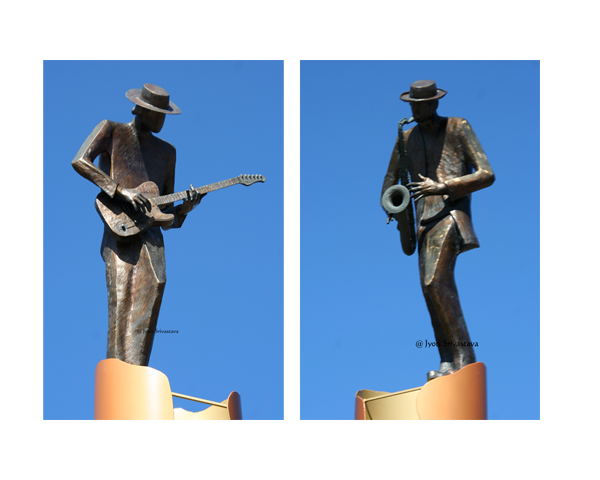 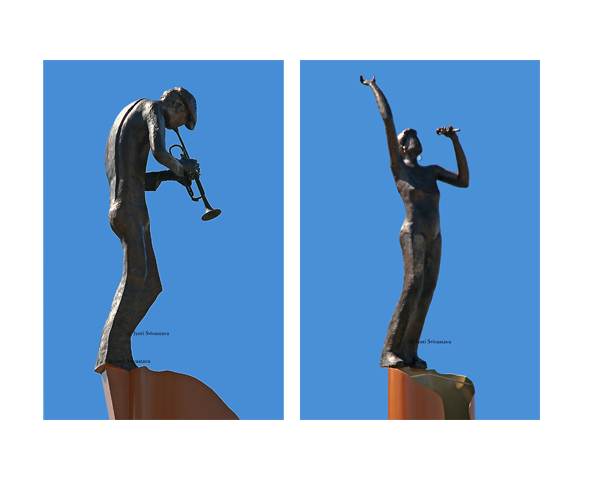 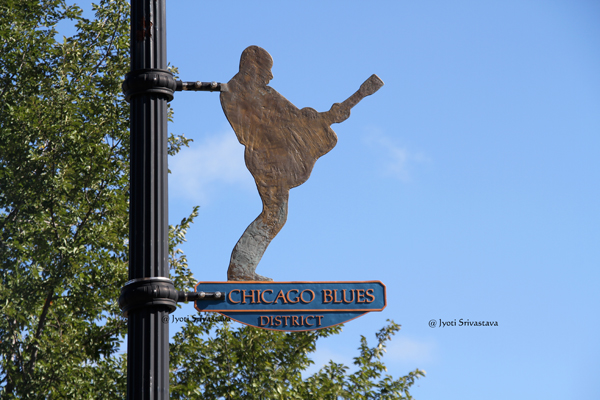 The commemorative signs and promotional statues seems to be the only reminder of the vibrant community that once was, and still is the Chicago Blues District!

The energy and the vitality is long gone now.

It was so sad to see the Blues District the way it is now!!!

But memories of it’s heydays have not faded yet. People still remember and talk about the good old days and it’s very likely to stumble into someone who have seen the big names in Chicago Blues perform there.

Chicago maybe called the Blues Capital of the world, but is not it’s birthplace. The place credited with the birth of Blues is the North Mississippi Delta region and the musical form emerged around the turn of the 19th century. But the story of Blues dates back to the Civil War. Influenced by African roots, field hollers, ballads, church music and rhythmic dance tunes called jump-ups evolved into a music for a singer who would engage in call-and-response with his guitar. He would sing a line, and the guitar would answer…

The Chicago Blues, is a result of many developments that took place in the 1920’s, especially “The Great Migration”. The African Americans in southern states were facing many problems like failing crops and increased discrimination against them. On the other hand northern states were growing as industrial centers and generating fresh job opportunities. Chicago in particular was a hub of many labor-intensive industries like steel and meat-packing, and there was also an increased demand for labor during the WW-I. The combined result of these situations lead to a mass migration of African American from southern to northern states, called “The Great Migration” between 1910 to 1970. Chicago attracted about 500,000 of the approximately 7 million African Americans migrating north. Before this migration, African Americans constituted 2 percent of Chicago’s population, but by 1970, they were 33 percent.

The Great Migration brought singers from the Southern States to the Chicago region. Singers like Buddy Guy, Otis Rush, Howlin’ Wolf, Muddy Waters, Bo Diddley, Willie Dixon and Koko Taylor, to name a few, found home in Chicago.. Combined with this was the growth of music industry. Although the music industry suffered during the Great Depression [1929-1933], the city still continued to serve as incubator of Blues Music. It was during the 1950’s that Chicago Blues really flourished. Chicago Blues changed from Mississippi Blues by adding electrically amplified guitar, amplified bass guitar, drums, piano, and sometimes saxophone, and making the harmonica louder with a microphone and an instrument amplifier. In fact, some even used the trumpet..

Coming back to the Chicago Blues District, it was once a mecca for African-Americans migrating from the impoverished south, and it bustled with black-owned businesses and with well-dressed men and women.
When I saw it two days back, it was hard to believe that that it was the same place I had read so much about.. Nightclubs like the Regal, Savoy, and Metropolitan have long shut down and even razed. 47th street is now a shopping street with lots of vacant spaces.. and the only hint of the old glory that it once was, were the four bronze statues and commemorative signs on streetlamp fixtures proclaiming the “Chicago Blues District”.. 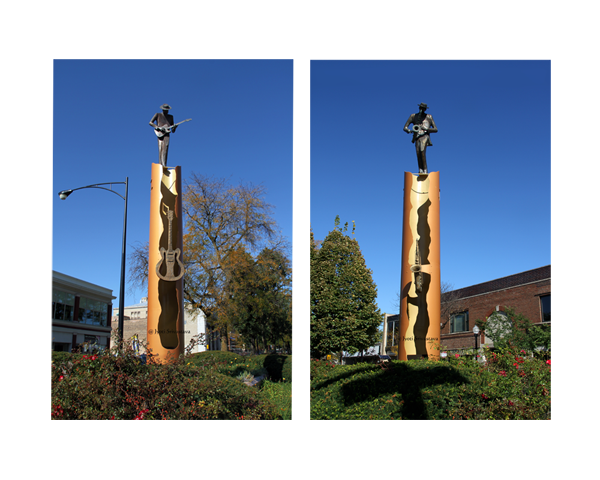 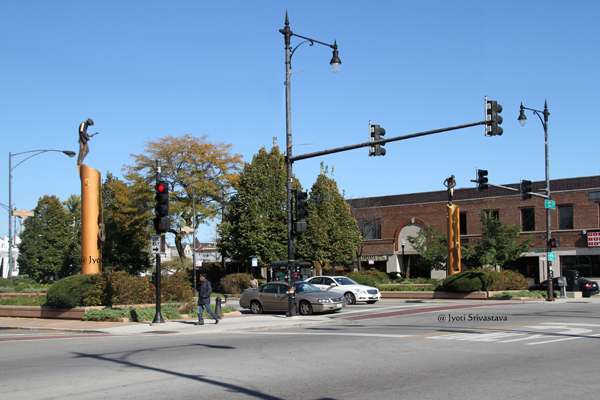 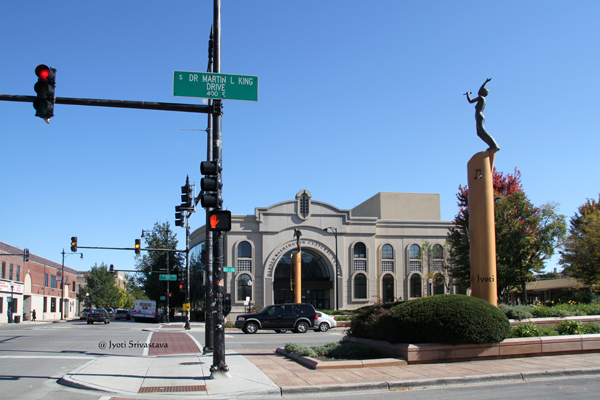 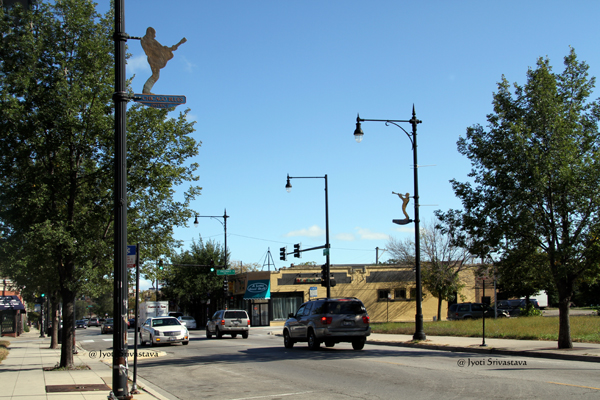 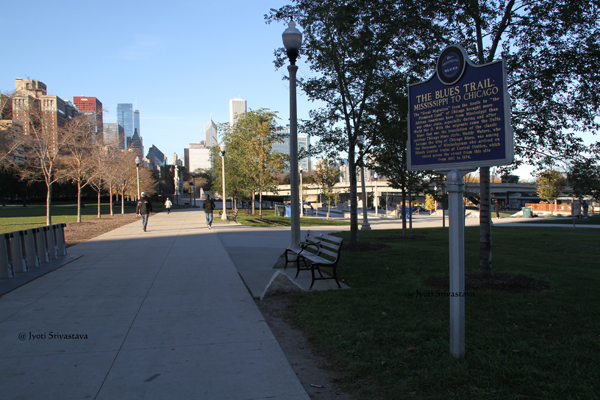 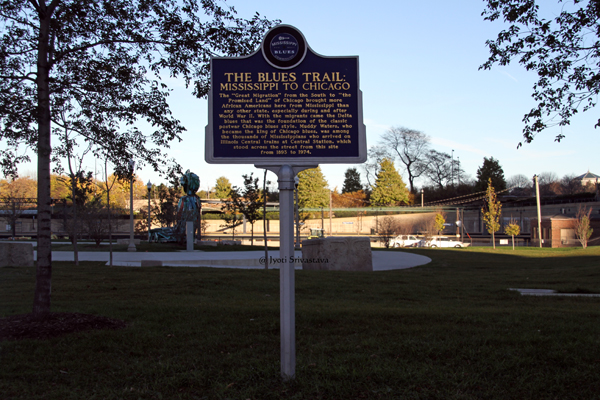 The “Great Migration” from the South to “the Promised Land” of Chicago brought more African Americans here from Mississippi than any other state, especially during and after World War II. With the migrants came the Delta blues that was the foundation of the classic postwar Chicago blues style. Muddy Waters, who became the king of Chicago blues, was among the thousands of Mississippians who arrived on Illinois Central trains at Central Station, which stood across the street from this site from 1893 to 1974. 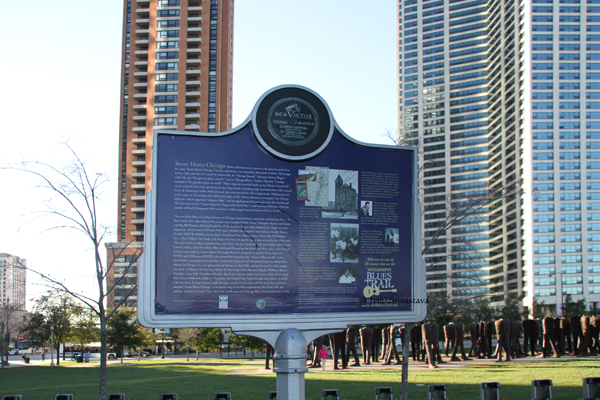 Robert Johnson never moved to the place he praised in his song “Sweet Home Chicago,” but his sentiments were shared by thousands of fellow Mississippi natives who came here in search of a better life. In “Chicago Bound,” bluesman Jimmy Rogers called the city “the greatest place around,” and in “Chicago Blues,” Arthur “Big Boy” Crudup deemed it “the greatest place on earth.” Many migrants traveled north on the Illinois Central (IC) via its extensive lines that spread across the Deep South, including eight hundred miles of IC-owned Yazoo & Mississippi Valley Railroad track that criss-crossed the Mississippi Delta. Pullman porters on IC trains to Mississippi often delivered copies of the African-American newspaper, the Chicago Defender, which organized “migrant clubs” and arranged group discounts for train fare northward. The first wave of the “Great Migration” began with World War I, and between 1910 and 1920 the number of black Chicagoans who were born in Mississippi increased from 4,612 to 19,485.

The rise of the blues recording industry in Chicago attracted many musicians, and during the 1930s, blues artists here who claimed Mississippi roots included Willie Dixon, Memphis Minnie, Lil Green, and big Bill Broonzy. During World War II the need for factory labor helped fuel a larger wave of migration, and between 1940 and 1950 some 150,000 Mississippians moved here. Muddy Waters, Howlin’ Wolf, Bo Diddley, Jimmy Reed, Sunnyland Slim, Emore James, Sonny Boy Williamson, No. 2 (Rice Miller), Otis Rush, and Magic Sam were among the many who arrived in the 1940s and ’50s and found recording opportunities with Chess, Vee-Jay (co-founded by Mississippi native Vivian Carter), Cobra, and other labels. Blues clubs proliferated on the South and West sides, and Chicago’s airwaves also took on a down-home Mississippi flavor on programs hosted by Pervis Spann of WVON and Al Benson of WGES, who earned the honorary title “Mayor of Bronzeville” as the South Side’s most popular personality. Local labels Delmark and Testament began recording blues albums in chicago for a new generation of listeners in the 1960s, paving the way for other companies such as Alligator and Earwig. Albums by Mississippi-born bluesmen Big Joe Williams, Jimmy Dawkins, Carey Bell, Honeyboy Edwards, Big Walter Horton, Eddy Clearwater, Eddie Shaw, Magic Slim, Fenton Robinson, Eddie C. Campbell, and Hound Dog Taylor brought their music to world-wide attention. Foreign tourists made Chicago a musical destination, and the local blues audience adopted “Sweet Home Chicago” as its theme song as the blues expanded to the North Side, the suburbs and here to Grant Park, where the world-renowned Chicago Blues Festival debuted in 1984.