ANICONIC versus ICONIC depiction of Buddha

In the study of Buddhist Art, an interesting facet is that the Large free-standing iconic images of the Buddha so prominent now-a-days in Buddhist art, are not found in the earliest period.

Buddhist Art has been divided into Aniconic [Pre-Iconic] and Iconic Phase. 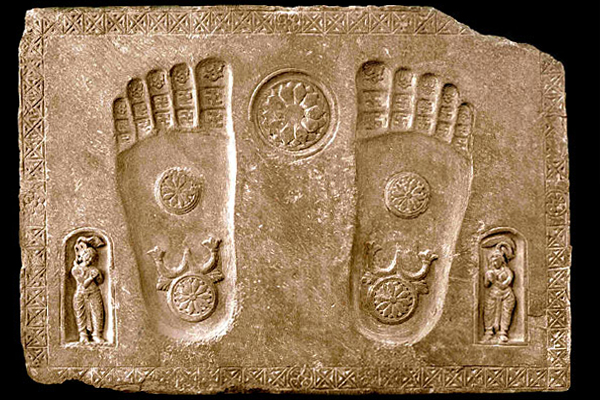 Although India had a long sculptural tradition and a mastery of rich iconography, the portrayal of Buddha in human form did not occur. This period is referred to as the Aniconic Phase. Artists were reluctant to depict the Buddha anthropomorphically, and developed sophisticated aniconic symbols to avoid doing so.  Buddha was represented only through his symbols – an empty throne, the Bodhi tree, the Buddha’s footprints [Buddhapada], the prayer wheel [Dharamchakra].  Even in narrative scenes where other human figures would appear, Buddha was shown symbolically. For example, the depiction of a Bodhi tree in early stone reliefs was interpreted to signify Buddha’s enlightenment beneath the tree. Similarly, portrayals of the wheel representing Buddhist law (Dharmachakra) were thought to be symbolic representations of Buddha’s first sermon. This tendency remained as late as the 2nd century CE in the southern parts of India.

Proponents of the theory have contended that the practice of creating anthropomorphic representations of the Buddha was initiated only when Mahayana Buddhism began to flourish around the early centuries CE. 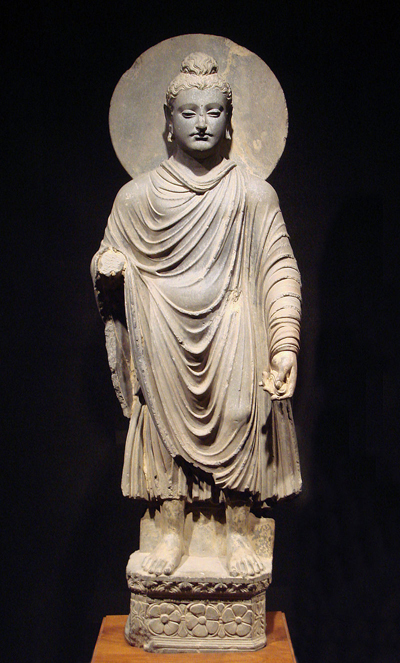 Anthropomorphic representations of the Buddha started to emerge from the 1st century CE in Northern India.
The two main centers of creation have been identified:
Gandhara – in today’s North West Frontier Province in Pakistan, and..
Mathura – in central northern India.

The art of Gandhara benefited from centuries of interaction with Greek culture since the conquests of Alexander the Great in 332 BC and the subsequent establishment of the Greco-Bactrian and Indo-Greek Kingdoms, leading to the development of Greco-Buddhist art. Gandharan Buddhist sculpture displays Greek artistic influence, and it has been suggested that the concept of the “man-god” was essentially inspired by Greek mythological culture. Artistically, the Gandharan school of sculpture is said to have contributed wavy hair, drapery covering both shoulders, shoes and sandals, acanthus leaf decorations, nirvana symbols etc.

The art of Mathura tends to be based on a strong Indian tradition, exemplified by the anthropomorphic representation of divinities such as the Yaksas, although in a style rather archaic compared to the later representations of the Buddha. The representations of the Buddha in Mathura, in central northern India, are generally dated slightly later than those of Gandhara. The Mathuran school contributed clothes covering the left shoulder of thin muslin, the wheel on the palm, the lotus seat, etc.

The Mathura and Gandhara arts cross-fertilized in due course of time, and the bulky Mathura Buddha gradually gave way to the slender elegance of the Gandharan image. The result of this synthesis ennobled, refined, and purified the Buddha image that appeared in the Gupta period. This Gupta style became the model for Southeast Asian Buddha images.

It is still a matter of debate whether the anthropomorphic representations of Buddha was essentially a result of a local evolution of Buddhist art at Mathura, or a consequence of Greek cultural influence in Gandhara through the Greco-Buddhist syncretism. 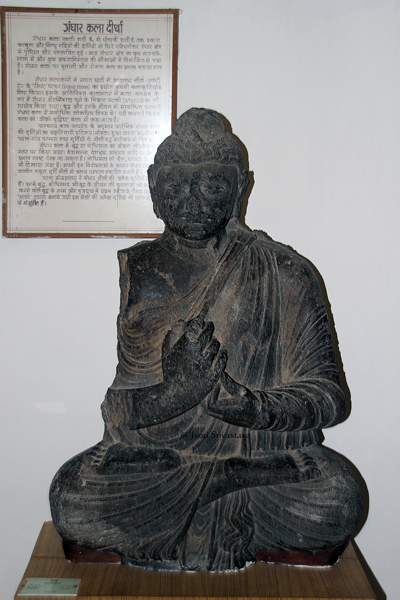 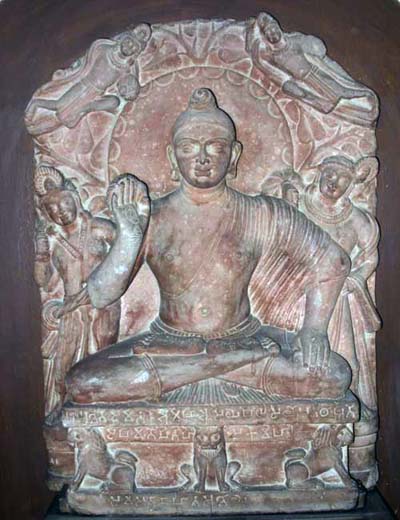 By the tenth century, Buddhist art creation was dying out in India, as Hinduism and Islam ultimately prevailed.

As Buddhism spread in other parts of the world, Buddhist art adapted to local styles and norms in each new host country.
An interesting read here.. click here..

PERSONAL NOTE:  As a kid, I have spent many summer vacations at Bodh Gaya. It is my maternal grandparents place. I still have many relatives living there. So I have special affinity with Gaya. Now, living in Chicago,  I wanted to dig deeper into my favorite childhood vacation destination.  Bodh Gaya is the birth place of Buddhism. Buddha was born in Lumbini [Nepal], but Buddhism was born in Bodh Gaya.   But I get boggled by the so many terms associated with Buddhism:  like the Four Sights, Four Noble Truths, Eight-Fold Path and Four Holy Pilgrim Sites. Then  Buddhist Iconography is full of symbolism associated with different mudras and objects. Also, there are various Schools of Buddhism. And then,  the concept of Bodhisattva, and the names like Avalokitesvar, Tara, and Maitreya. I  needed a better understanding of these names, terms and concepts.  So a few posts covering these aspects.