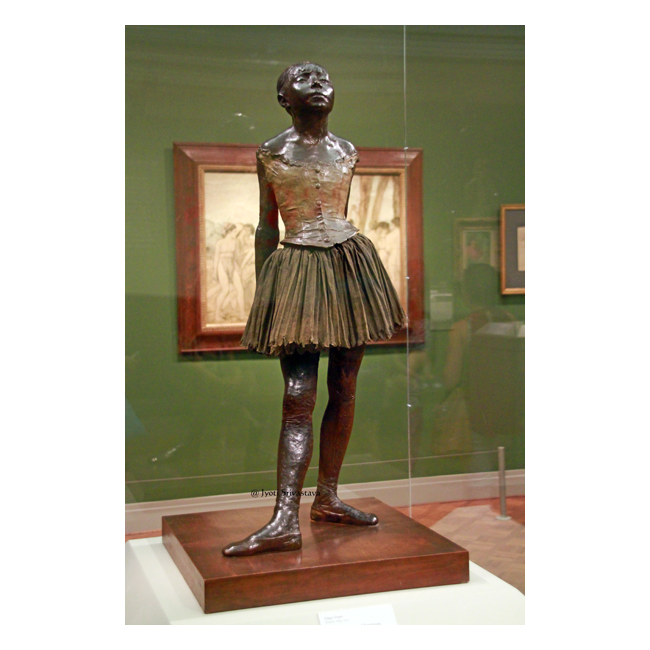 Temporary exhibition: “Degas: At the Track, On the Stage”, at the Art Institute of Chicago. 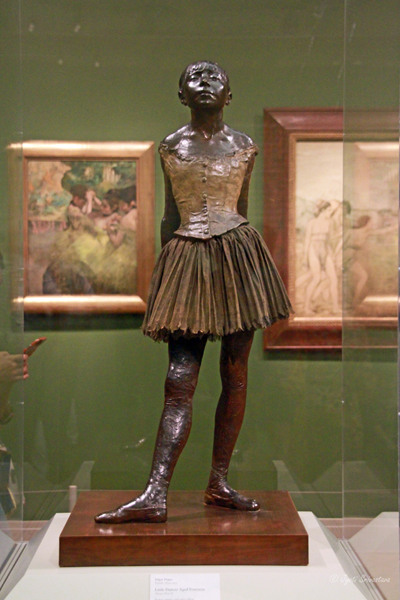 Originally sculpted in wax, it is the only sculpture that Degas exhibited in public. It was shown in Paris at the Sixth Impressionist Exhibition of 1881.

Degas had no formal training in sculpture. In order to prepare for this, the artist executed numerous sketching  of his model. These drawings such as “Three Studies of A Dancer in Fourth Position”,  far surpass in numbers any other studies Dagas made of a single figure, and in fact this approach has a few precedence in the history of sculptures.

When the original wax-sculpture was exhibited in Paris 1881 exhibition;  it was naturally coloured, fitted with real human hair in satin ribbon, dressed in muslin skirt, a lace-trimmed bodice and real ballet slippers.  It was a mixed-media sculpture and an example of hyperrealism.

Although it is difficult to imagine today, in its time the sculpture was subject to impassioned and sustained debate that sent shockwaves in Parisian art world.  Some claimed it revealed Degas’ anthropologist or naturalist side, and some accused that the sculpture represented bestial manner, comparing to monkey and Aztec.

The original wax-sculpture was exhibited in glass cage, which is as Degas wanted. This was to assert the Dancer’s status as a work of art. The current exhibition has the bronze cast sculpture but is kept in glass case as Degas intended.

The bronze edition was made after Degas’ death. The ribbon in her hair and tutu are real. The AIC website notes that this bronze cast is  from the original wax sculpture displayed at the sixth Impressionist exhibition in 1881.

The model is Marie van Goethem, a young student of the Paris Opera Ballet dance school. She lived in Montmartre, a few blocks from Degas’s studio, then located on Rue Fontaine. She has also featured in some other of Degas’ works like “Dancer with Fan”, “Dancing Lesson”, “Dancer Resting”, but this “Dancer aged Fourteed”, is the most famous among them all. .

When Degas died in 1917, about 150 wax or clay sculptures were found in his studio. These statues had remained more or less unknown to the public while the artist was alive, except for this sculpture “Dancer Aged 14” which Degas had shown in the Impressionist exhibition in 1881. 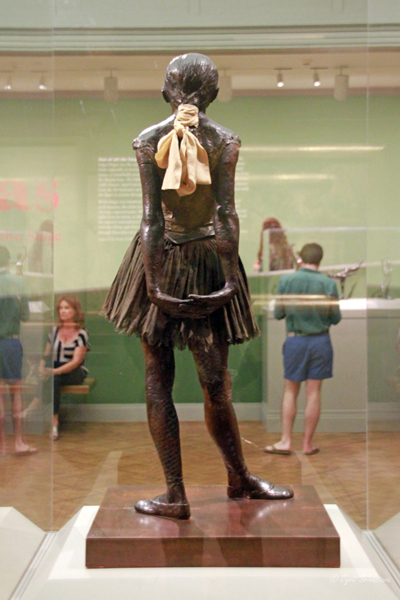 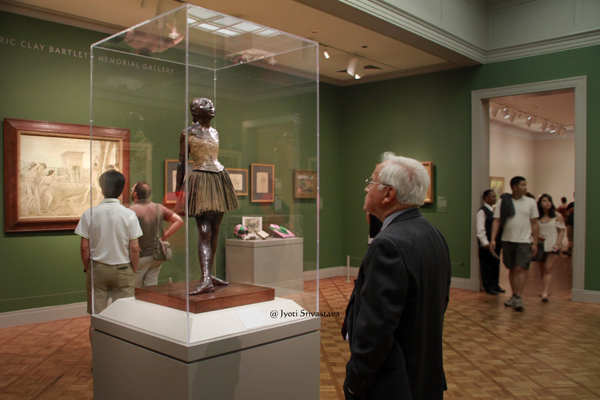 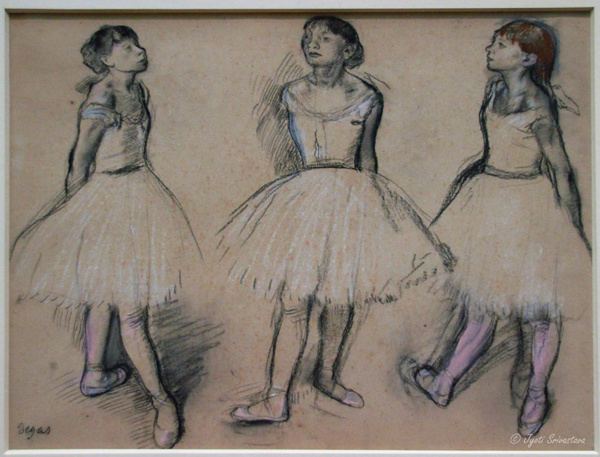 Three Studies of a Dancer in Fourth Position – by Edgar Degas 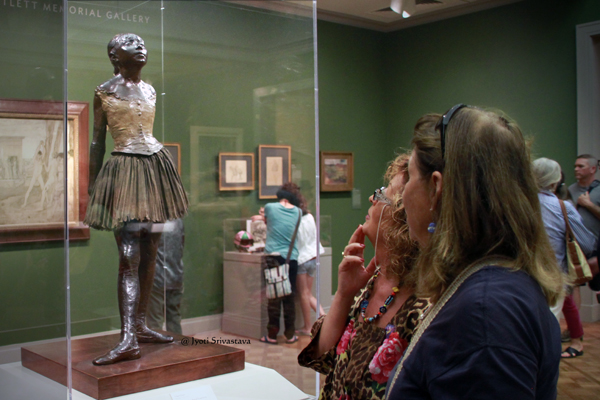 Some More From the Exhibition: Degas: At the Track, On the Stage. 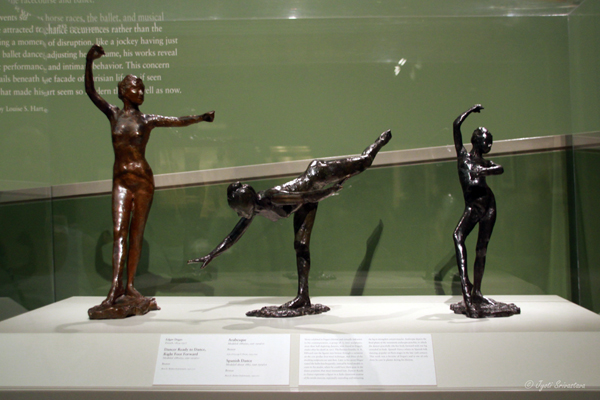 Never exhibited in Degas’s lifetime and virtually unknown to his contemporaries, a group of 73 wax sculptures,, more than half depicting dancers, were found in Degas’s studio after his death. A Parisian foundry A.A.Hebrard cast the figures into bronze through the lost wax technique. Three of the resulting sculptures are seen here. Later in his career Degas visited the ballet less frequently. Instead he had them come to his studio, where he could have them pose in the dance positions that most interested him.
Dancer Ready to Dance – represents a figure in a daily classroom routine of the “tendu” exercise, of repeatedly extending and retracting the leg to strengthen certain muscles.
Arabesque – depicts the final phase of the movement arabesque penchee, in which the dancer gracefully tilt her body forward, with one leg extended in the back.
Spanish Dancer – relates to Spanish folk dancing, popular in Paris stages in the late 19th century. his work was a favorite of Degas’s and one of only three he cast in plaster during his lifetime. 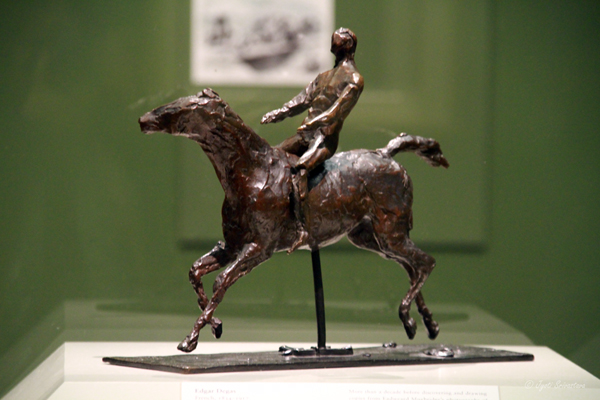 Horse with Jockey – Horse Galloping, Turning Head to the Right, Feet not Touching the Ground.