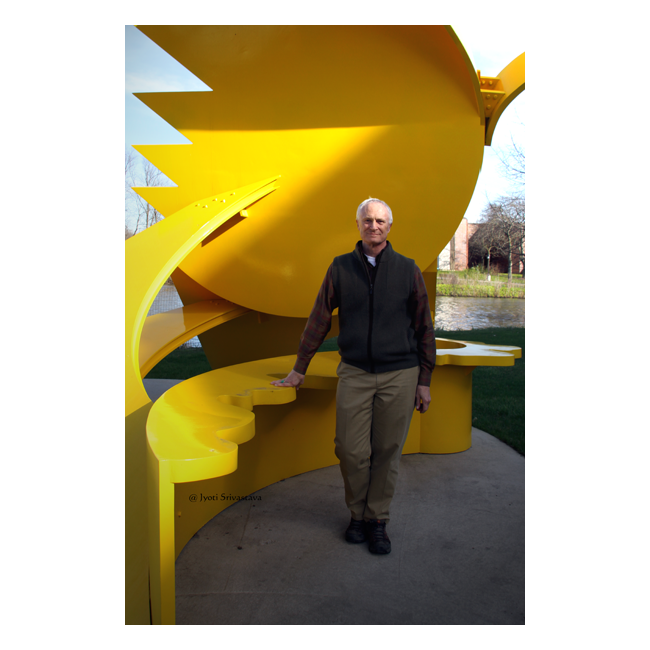 April 7, 2017: It was a gorgeous spring day, and I took a beautiful long drive to the Nathan Manilow Sculpture Park [NMSP]. The idea was two-fold: to participate in the celebration of the 102nd birthday of noted Jazz Singer Billie Holiday. But more importantly, what really motivated me to drive to the NMSP that day, was to meet with the wonderful Director and Curator of NMSP Geoffrey Bates, who is about to retire, and begin the next chapter in his life.

Whenever, I have met Geoffrey Bates, I have admired his extensive knowledge, and his passion and commitment towards arts, and very polite and courteous demeanor. An absolutely fabulous person. I really wanted to meet him before he retires.. and the event gave me that perfect opportunity, cause I knew he would be there. 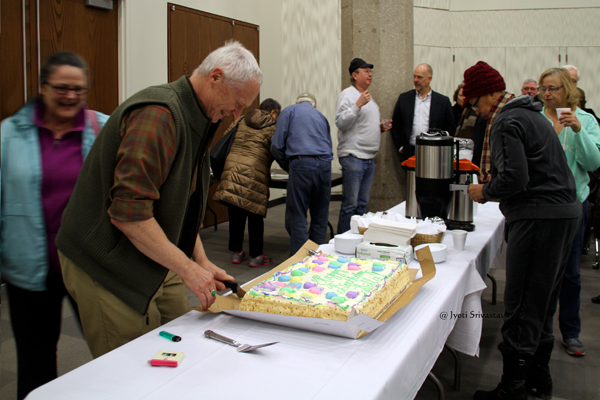 A wide range of events were organized around Billie Holiday birthday celebrations, starting from guided walk in the park, to film screenings, expert talks, and birthday cake! There were events around Mark di Suvero’s sculpture “Yes! for Lady Day.” Suvero had dedicated the sculpture to Billie Holiday, also known as Lady Day! It was an absolutely beautiful day for all the celebrations! 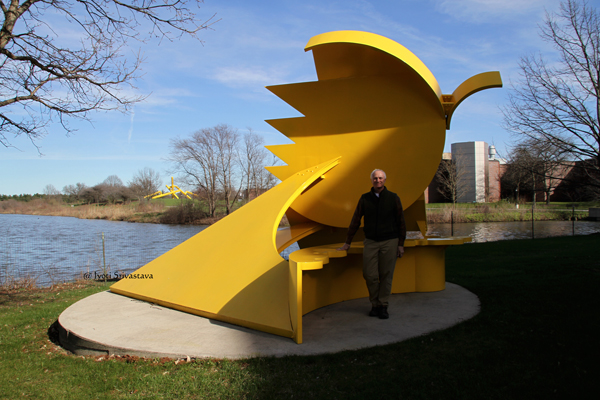 As mentioned earlier, my main motivation was to meet with Curator and Director of NMSP Geoffrey Bates.

It was ten years back, in April 2007, that Geoffrey Bates was named as the Director and Curator of the Nathan Manilow Sculpture Park [NMSP] at Governor’s State University. Established in 1969, the NMSP has grown into a major collection of 29 contemporary sculptures within the rolling prairie landscape of the University campus. The NMSP advances the university’s mission to serve as a public square and cultural center within southern region. The park’s collection contains Mark di Suvero’s “Yes! for Lady Day,” earthworks like Martin Puryear’s “Bodark Arc” and Mary Miss “Field Rotation.” It has sculptures by leading Illinois artists like Richard Hunt, Terrence Karpowicz, Michael Dunbar, Tony Tasset, Mike Baur, Ted Garner, and Christine Tarkowski.

Preserving and maintaining monumental sculptures is a very demanding task. When they are in outdoor setting, its even more of a challenge. To further add to the challenge is effects of Chicago’s climatic vagaries, ranging from winter’s thick blanket of snow, to summer’s scorching heat! Changes in temperature, humidity and other variables create corrosion, expansion and contraction and weaken the integrity of outdoor sculptures and can cause breakages and peeling of materials. Under Bates the NMSP has been well maintained and the collection increased. In 2012, Yvonne Domenge’s  “Windwaves,” and in 2014 Barry Tinsley’s “Butte” have been added to the Park’s collection. A number of sculptures have been refurbished and restored, like “Spiral” by Clement Meadmore, “Large Planar Hybrid” by Richard Hunt, “Illinois Landscape No.5” by John Henry, “Falling Meteor” by Jerry Peart, “Flying Saucer” by Jene Highstein, and elements of Martin Puryear’s “Bodark Arc.” Today the Park has a permanent collection of 28 contemporary sculptures.

In 2009, the Solo Exhibition Series was started at the NMSP under Geoffrey Bates. It presents exceptional artwork by nationally and internationally recognized artists. The first in the series was 12-figure installation “Horizons” by Icelandic sculptor Steinunn Thorarinsdottir [2009]. This was followed by “Neil Goodman in the Park” [2011] and Sophie Ryder’s “Upside Down, Kneeling” [2012]. Currently the 4th solo exhibition “Don’t Tread on Me” is on display. It includes three tire sculptures by noted artist Chakaia Booker: Serendipity [1998], Meeting Ends [2005] and What’s Not [2009].

Also under Bates a new annual fundraising event “Carts and Cocktails” was added to the NMSP’s events calendar. It began in 2012 with the celebration of the 30th anniversary of Martin Puryear’s “Bodark Arc”, and following year was the 30th anniversary of Bruce Nauman’s “House Divided.” In 2014 Chakaia Booker was the guest of honor for the event. In 2015 was Chicago’s Richard Hunt and in 2016 Chicago’s Tony Tasset.

Apart from these, there are many more year-round events and programs which build an appreciation and understanding of contemporary sculpture and highlight the surrounding landscape. Also, tours of the park are presented free of charge by dedicated docents and offer the opportunity for individuals or groups to encounter the artwork in a relaxed atmosphere.

Bates has also been one of the founding members of S.A.M.B.A. [Southland Arts, Municipalities, and Business Alliance], an organization which promotes partnership between and among various agencies in the south suburbs. SAMBA’s “Let Them Eat Jazz,” a region-wide centennial celebration of Jazz as manifested in all the arts, is currently underway.

I take the opportunity to wish Geoffrey Bates the Best for his next chapter in life.

And welcome Jeff Stevenson who will take in as the new Director and Curator of NMSP.  Another wonderful person, and an artist himself!

Arts at the University is in good hands! 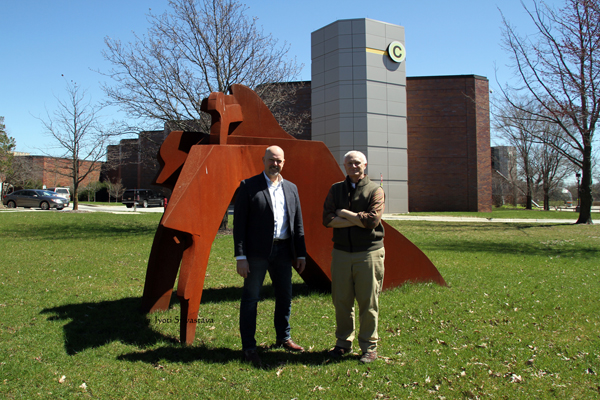 No Comments to “April 2017: Geoffrey Bates a Passionate Art Advocate, and Highly Respected Director and Curator of Nathan Manilow Sculpture Park is Retiring..”

Leave a Reply to Nathan Manilow Sculpture Park ’17 | Been There, Seen That