AIC Exhibition: “Gates of the Lord: The Tradition of Krishna Painting” 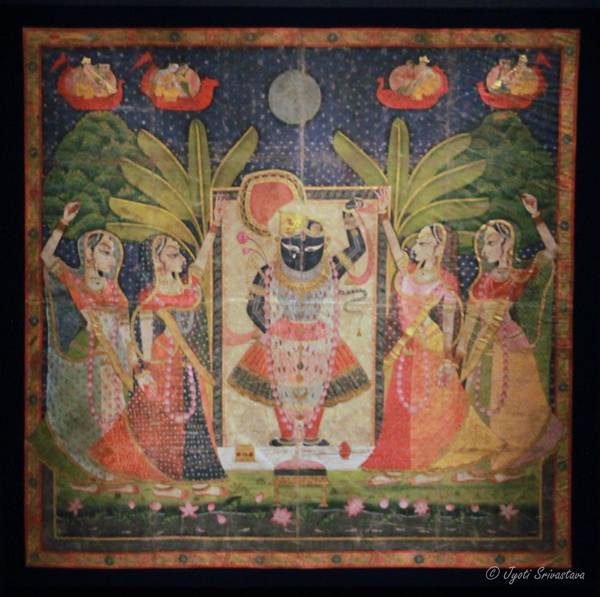 Gates of the Lord: The Tradition of Krishna Painting

Gates of the Lord: The Tradition of Krishna Paintings is the first major U.S. exhibition to explore the unique visual culture of the Pushtimarg, a Hindu denomination from Western India. The exhibition brings together over 100 artworks from private and public collections in India and the United States. 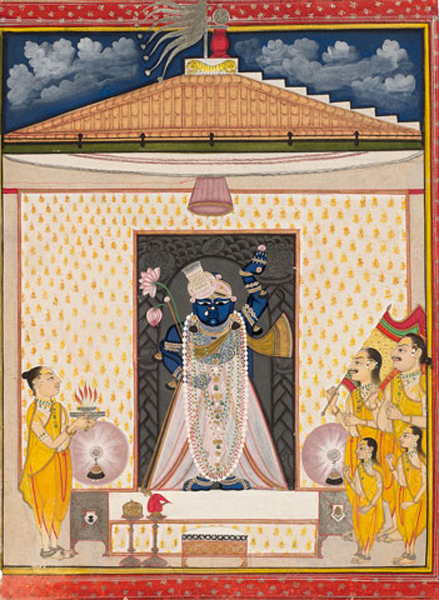 To fully appreciate and enjoy the exhibition, one needs understand a few terms related to the related to the exhibits. I have grown in India, and am Hindu by religion, and I still needed to clarify the meaning/ context of a few words/ terms:
Pushimarg,  Shrinathji,  Nathdwara, Rajasthani miniature paintings, and Pichvai.

PUSHTIMARG DEVOTIONAL FORM:  The exhibition  explores the visual culture of the Pushtimarg sect. They consider god Vishnu as their primary deity. Vishnu has ten avatars [incarnations or earthly manifestations]. Of these the eighth incarnation is of Krishna, who is the most significant deity for the Pushtimarg sect. Pushtimarg [meaning “the Path of Grace”] is a devotional sect, founded by Vallabhacharya [also known as Mahaprabhu] around 1500 AD. The devotional movement is based on the idea that love of God should be seen as an end in itself, not as a means to something else. The love is expressed through “seva” [service] of Lord Krishna. No caste, creed, color, sex or age prevents one from attaining Shri Krishna’s Grace. In fact, one can serve Him better, by being a householder. This is different from other philosophies that require a life of contemplation as a monk. [For more on Vishnu and Krishna, scroll down, way down, to NOTES].

KRISHNA / SHRINATHJI:   In the Pushimarg sect, Krishna is worshipped as Shrinathji.  Shrinathji is a manifestation of Lord Krishna as a seven year old child [balak] who lifts Govardhan hill,  like an umbrella, to shield the people of Vrindavan from a storm of downpour sent by Indra, the King of Devas. The icon of Shrinathji is shown with left hand raised above to hold the mountain and right hand resting on the waist.  The story in this from Bhagavata Purana.

NATHDWARA HAVELI: The religious and artistic center of the Pushimarg sect is based in the temple town of Nathdwara, near Udaipur in the state of Rajasthan, India. Nathdwara  literally means  “The Gates of the Lord”, which gives the exhibition its name. The term “Haveli” literally means mansion. The term “Nathdwara Haveli” is used because the Nathdwara temple is located in a fortified mansion.

RAJASTHANI MNIATURE PAINTINGS: Rajasthan is one of the pioneers of miniature paintings in India. Even though the figures are miniature, there are amazing minute details, with strong lines and bold colors set in harmonious patterns. The scenes are usually of hills and valleys, deserts, places and forts, gardens, court scenes, and religious processions.

PICHVAI:  Most of the paintings in the exhibition are Pichavi. Pichvai refers to textile hangings that are behind the statue of a deity, or adorn the walls of the temple.  The purpose of Pichhwais, other than its artistic appeal, is to narrate tales of Krishna in different moods, seasons, festivals, and attire. It is a very ancient form of art passed on from generation to generation and it has a very devotional theme towards Lord Krishna.

The EXHIBITION explores the visual traditions of Pushimarg sect, through more than 100 artworks from private and public collections in India and the US. 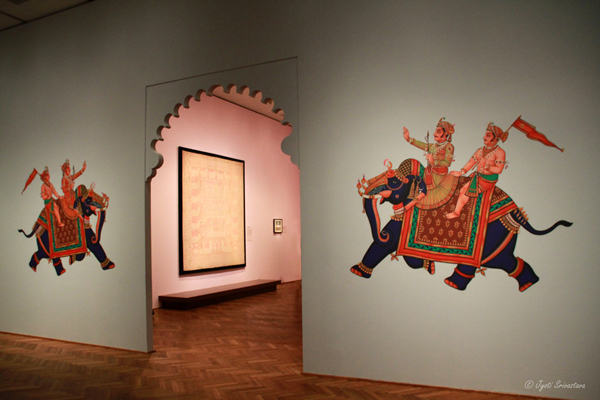 Processional mural at the entrance gate to Haveli complex of Srinathji at Nathdwara.

Procession mural such as this one decorate the entrance gate to the haveli complex of Shrinathji of Nathdwara. The hereditary artists of Nathdwara renew murals throughout the town and the haveli annually at Diwali, the Hindu New Year. The artists have been working in this tradition since they arrived at Nathdwara with Shrinathji in 1672. 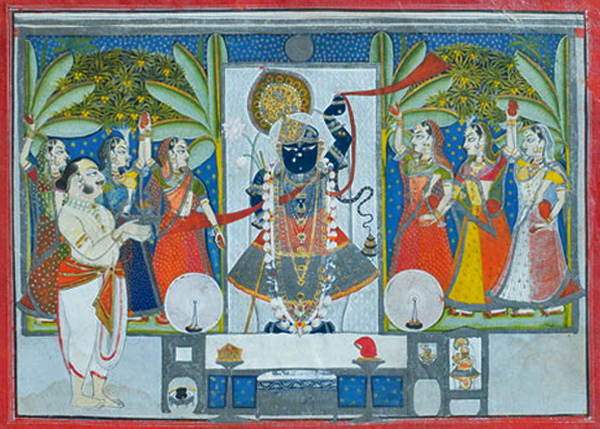 Veneration of Shrinathji: Service through music, food and adornment:
As mentioned earlier, Pushimarg is a devotional sect, and believes that love of god is an end in itself. The verenation of Shrinathji is done through performing “seva” [devotional or loving service]. Seva is ritualized worship that includes – raag [music / playing and hearing traditional Haveli music]; bhog [food /offering pure vegetarian saatvik food], and, vaastra and shringar [adornment / decorating deity with beautiful cloths and jewellery]. These – raag, bhog, vaastra and shringar – are performed at prescribed time of the day and in accordance with the season.

There are two striking features about the image of Shrinathji:
color [dark blue/ black] and posture [one hand raised and the other on the waist].

While at the exhibition, I noticed that many of the visitors were puzzled by the color in which Krishna was depicted: dark blue or black? There is an explanation. The name Krishna, originates from the Sanskrit word “Kṛṣṇa”, which is primarily an adjective meaning “black”, “dark” or “dark blue”.  Based on the name he is often depicted as black or blue-skinned. Interestingly, in paintings, he is usually depicted dark blue, whereas in statues he is depicted in black color. When I was at the exhibition; a lady staffer pulled me aside and said,  “You seem to know a lot, was Krishna blue because he drank poison”?  Well that holds for Shiva! In the case of Krishna, the name itself means dark.

The other noticeable feature about Shrinathji’s image is his posture. Most of the paintings have the seven year old child, with one hand resting on his waist and the other raised above. As mentioned earlier, the Pushtimarg sect worship as a seven year old child who lifts Govardhan hill, like an umbrella, to shield the people from the downpour sent by Indra, the God of Rain The second most common posture of Shrinathji playing flute. Other prominent features are his peacock feather crown, heavy jewellery, and his cloths, which changes according to the different seasons in the year. He is often seen in pastoral settings with lush trees, and accompanied by cows and gopis [milkmaids]. 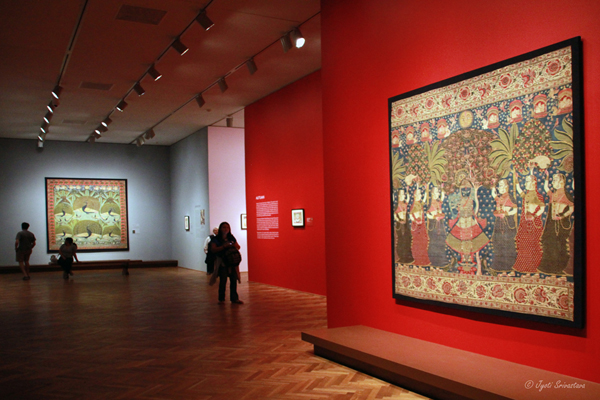 Gallery with seasons as theme for pichvais

Importance of Seasons:
The temple of Nathdwara, the seat of Pushtimarg faith, revolves around the seasons and their associated festivals. The festival sevas often recall an episode from Krishna’s life – such as birth, miracle, or “lilas” [divine adventures]. The festivals are largely tied to Vraj festival calendars which consists of six seasons: grishma [summer], varsha [monsoon], sharad [autumn], hemanta [pre-winter], shishra [winter] and vasant [spring]. Shrinathjis seva – music, food, adornment – are all dependent on the different seasons.

The importance of different seasons are reflected in the color and mood of the Pichvai paintings that to adorn the walls of temples, and form backdrop of Krishna idols. The background projection of trees, birds and flowers, as well as the ornaments and cloths of Shrinathji; all change according to the flavor of the season. In summer there are pink lotuses, in monsoon there are peacocks, and autumn marks the celebration of several Krishna lilas [divine advenbtures] including “Daan Lila” and “Raas Lila”.

Nathdwara’s haveli sangeet [music] is sung to the accompaniment of the veena and the pakkawaj. These south Indian instruments occupy centre stage here, as Pushti Marg’s 12th century founder patron Vallabhacharya was originally from Andhra. 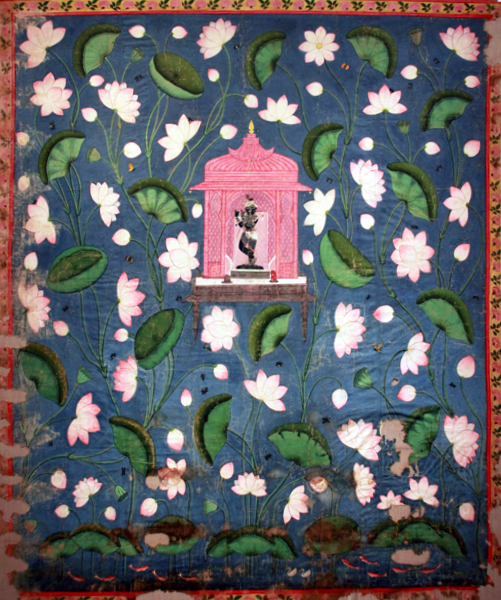 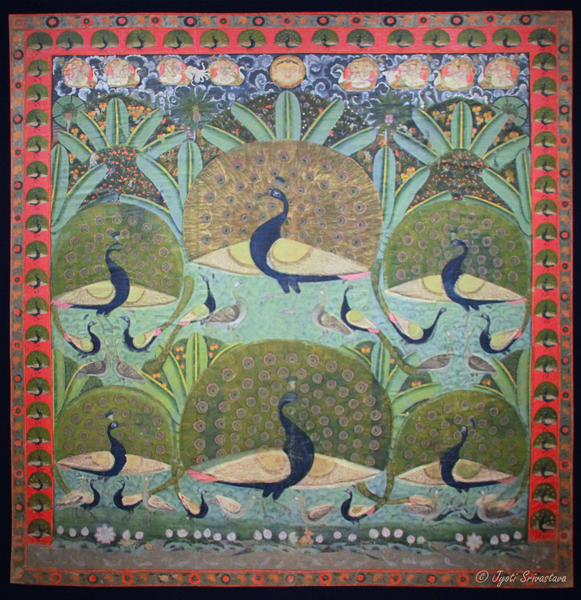 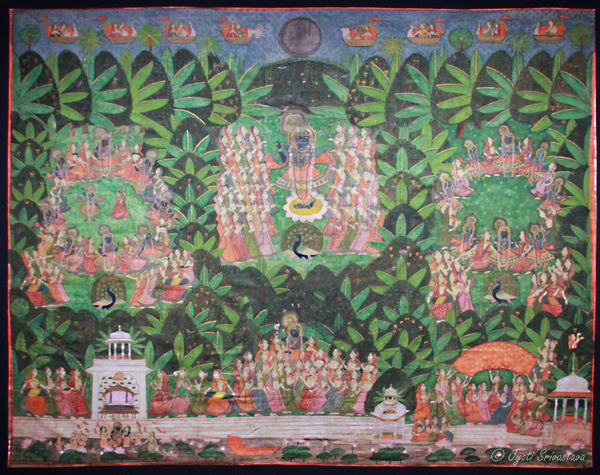 Raas Lila in Sharad Purnima: The painting shows Krishna performing “Raas Lila” [great circular dance] in sharad purnima [autumn full moon]. In this, Krishna charms the gopis with the music of his magical flute, which is so moving that the women all join him to dance under the moonlight. Miraculously, each gopi believes he is dancing solely with her. Sharad Purnima is one of the most significant festivals as it enacts the desire of individual souls for oneness with Krishna.

Rajasthani miniature paintings:
One prominent aspect in all these Pichvai or background hangings is the beauty of Rajasthani miniature paintings. Even though the figures are miniature, there are amazing minute details. Very fine, specially created brushes are used for these paintings. The figures are graceful, with well proportioned bodies and sharp features. There are bright colors and bold lines. The subjects of miniature paintings included portraits, landscapes, flora, fauna and the religious festivals. The emphasis is on the creation of mood, and in case of Nathdwara paintings, the different seasons are predominant factor influencing the mood of paintings.

Deccani Pichvai:
Unlike Pichvais from the Nathadwara school, the southern part of India, known as the Deccan Plateau, gave birth to a separate and distinct type of pichwai. These have simply been called “Deccani.” Unlike the Nathadwara paintings, Deccani pichvais are less dramatic and colorful. They are made by stenciling images onto cotton and applying gold foil. The exhibition has few amazing Deccani pichvais as well! 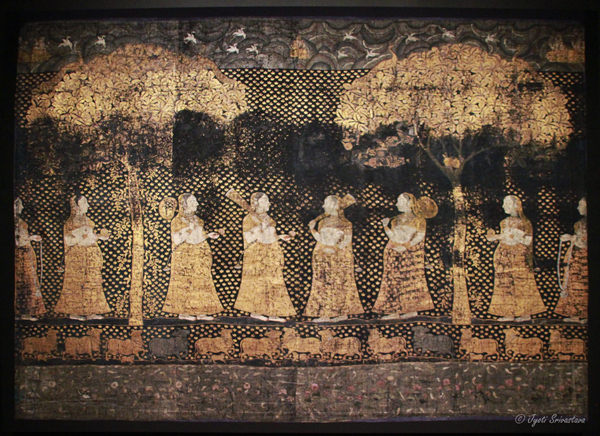 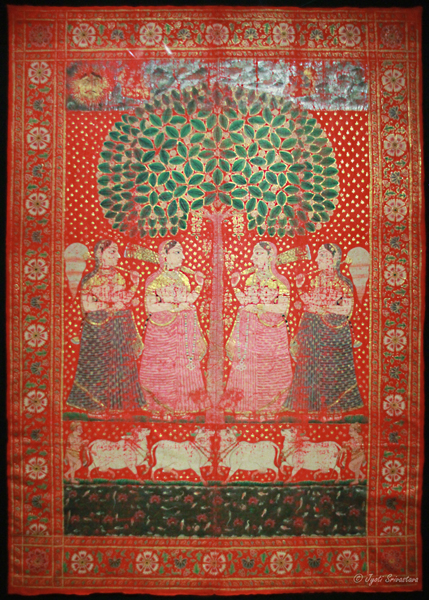 Enhancing the experience of the sect’s rich culture are festival and devotional music, a shrine reconstruction, and touchscreen kiosks that allow visitors to page through religious manuscripts, an artist’s sketchbook, and a historic photo album. The exhibition concludes with an exploration of the works, sketches, and observations of prominent 20th and 21stcentury Nathdwara artists who have kept the painting tradition flourishing through the present day.

NOTES: I had prepared some notes to write this post. Rather than deleting them, I would leave them here, for anyone interested in more details..

Vishnu, Krishna and Shrinathji
Hinduism comprises of three major traditions: Shaivism, Vaishnavism and Shaktism, which consider Shiva, Vishnu and Shakti as their supreme deity. Vaishnavism is one of the largest denominations of Hinduism. The followers worship Vishnu as the Supreme Lord – and preserver of Hindu trimurti – and his ten avatars, including Rama and Krishna.

The DASHAVATARS [Dash means Ten, and Avatars means Incarnations, or earthy manifestations]: Vishnu who is known as the Preserver of the Universe, seeks from time to time to redeem the world and as an Avatãr (Incarnation) manifests his Divine Being into the life of man, whenever evil threatens it. Each of these Avatar’s have significant impact on the timeline of occurance. These are: [1] Matsya [fish-avatar], [2] Kurma [tortoise-avatar], [3] Varaha [boar-avatar], [4] Narashima [half-man half-lionavatar], [5] Vamana [dwarf-avatar], [6] Parashurama [sage with axe], [7] Rama [King of Ayodhya, hero of Ramayana], [8] Krishna [King of Dwarka, central character of Mahabharata], [9] Buddha [the Enlightened One, who set the course for a new religion, Buddhism], and [10] Kalki [the tenth incarnation of Vishnu is yet to manifest itself. It is believed that it will be in the form of a horseman who will appear when the world is near its end [Kal-yuga] and save it from extinction].

BHAKTI MOVEMENT [Bhakti means devotional]: The devotional movement is based on the idea that love of God should be seen as an end in itself, not as a means to something else. There are five main Acharyas of the Bhakti tradition of Hinduism: Shankaracharya, Ramanujacharya, Madhavacharya, Nimbarkacharya, and Vallabhacharya . These acharyas have made significant contribution to the bhakti movement and led to the medieval rise in popularity of the Hindu Religion.

PUSHTIMARG: Is one of the Bhakti traditions in India, which originated in south India.  Pushtimarg (“the Path of Grace”) is a Vaishnav sect of the Hinduism, founded by Vallabhacharya (also known as Mahaprabhu) around 1500 AD. They consider god Vishnu as their primary deity. Known as the Pillar of the Universe, and the Preserver God, Vishnu has ten avatars [incarnations / or earthly manifestations], including Krishna, the most significant for the Pushtimarg sect. is spontaneous, selfless and motiveless love for Shri Krishna. The love is expressed through service [seva] of Lord Krishna. No caste, creed, color, sex or age prevents one from attaining Shri Krishna’s Grace. It does not require a devotee to give up a householder’s life. In fact, one can serve Him better, by being a householder. This is different from other philosophies that require a life of contemplation as a monk.

2 Comments to “AIC Exhibition: “Gates of the Lord: The Tradition of Krishna Painting””