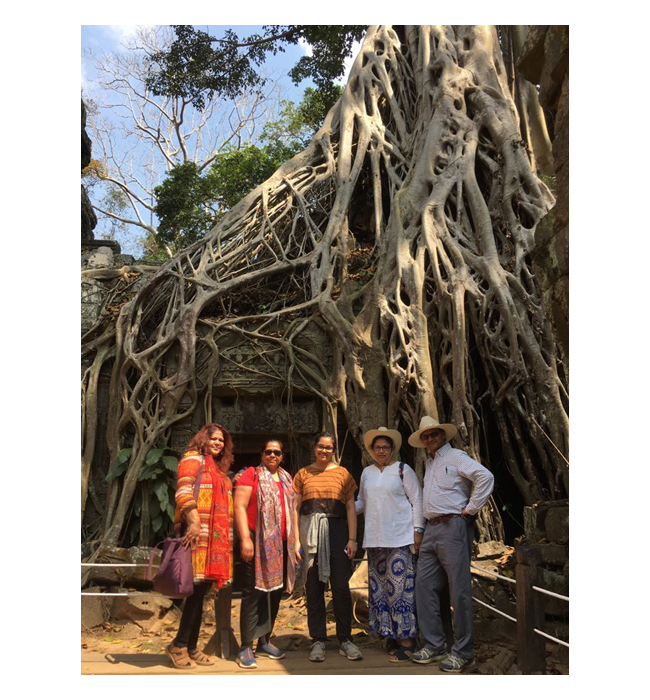 The temple is dedicated to the mother of Jayavarman VII.

The most distinctive feature of Ta Prohm is the giant root trees growing out of the ruins.

Ta Prohm is one of “the big three” must see temples of Angkor, along with Angkor Wat and Angkor Thom.

Ta Prohm is a UNESCO World Heritage Site [WHS], as part of Angkor Archaeological Park, which was listed in 1992. Angkor Archaeological Park contains the magnificent remains of the different capitals of the Khmer Empire, from the 9th to the 15th century. They include the famous Temple of Angkor Wat , and also monuments like Bayon, Baphoun, Elephant Terrace, Ta Prohm, Preah Khan, and Banteay Srei. 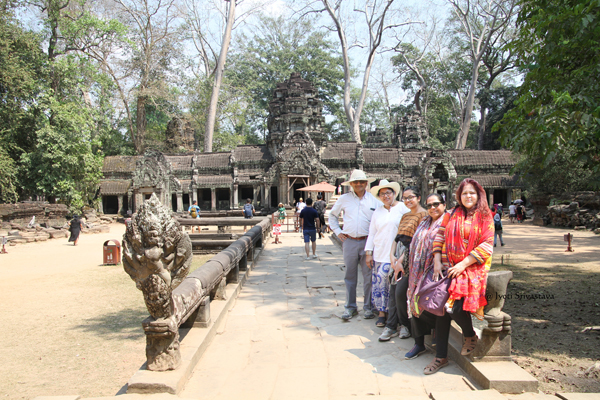 In 1186 A.D., Jayavarman VII embarked on a massive program of construction and public works. Rajavihara, today known as Ta Prohm, was one of the first temples founded pursuant to that program. The stele commemorating the foundation gives a date of 1186 A.

Jayavarman VII constructed this Rajavihara in honor of his mother. The temple’s main image, representing Prajnaparamita, the personification of wisdom, was modelled on the king’s mother. The northern and southern satellite temples in the third enclosure were dedicated to the king’s guru, Jayamangalartha, and his elder brother respectively.  As such, Ta Prohm formed a complementary pair with the temple monastery of Preah Khan, dedicated to the king’s father. The main image at Preah Khan is of Bodhisattva, modelled on the king’s father.

The design of Ta Prohm is that of a typical “flat” Khmer temple; as opposed to a temple-pyramid or temple-mountain [the inner levels of which are higher than the outer]. Five rectangular enclosing walls surround a central sanctuary. Like most Khmer temples, Ta Prohm is oriented to the east.

Ta Prohm was a Buddhist monastery and university dedicated to the mother of Jayavarman VII. It is one of the few temples in the Angkor region where an inscription provides information about the temple’s inhabitants and dependents. The temple’s stele records that the site was home to more than 12,500 people, including high priests and dancers. There were additional 80,000 people in the surrounding villages working to provide services and supplies. The stele also notes that the temple amassed considerable riches, including gold, pearls and silks. Expansions and additions to Ta Prohm continued as late as the rule of Srindravarman at the end of the 15th century.

Ta Prohm does  not have many narrative bas-reliefs [as compared to Angkor Wat or Angkor Thom]. The temple features stone reliefs of devatas, meditating monks, and dvarapalas [temple guardians]. 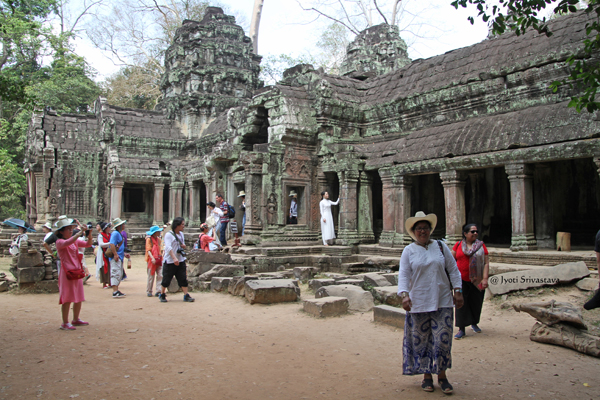 After the fall of the Khmer Empire in the 15th century, the temple of Ta Prohm was abandoned and neglected for centuries. When the effort to conserve and restore the temples of Angkor began in the early 21st century, the École française d’Extrême-Orient decided that Ta Prohm would be left largely as it had been found, as a “concession to the general taste for the picturesque.” Nevertheless, much work has been done to stabilize the ruins, to permit access, and to maintain “this condition of apparent neglect.”

The conservation and restoration of Ta Prohm is a partnership project of the ASI [Archaeological Survey of India] and the APSARA [Authority for the Protection and Management of Angkor and the Region of Siem Reap]. As of 2013, Archaeological Survey of India has restored most parts of the temple complex some of which have been constructed from scratch. Wooden walkways, platforms and roped railings have been put in place around the site to protect the monument from further damages due to the large tourist inflow.

The temple of Ta Prohm was used as a location in the film Tomb Raider. 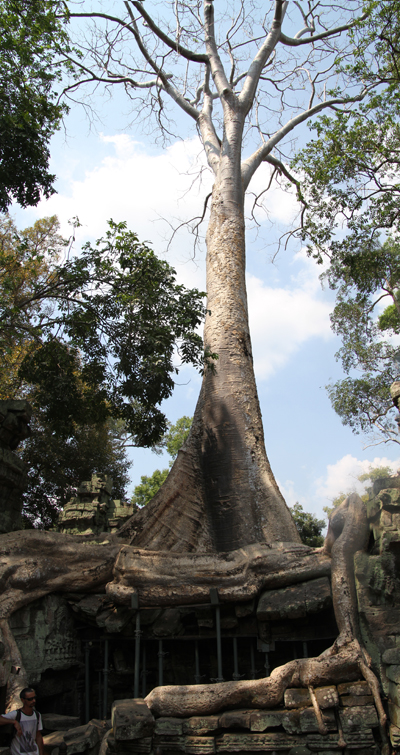 Ta Prohm temple ruins are most famous for giant trees that have engulfed the temple.
Images above and below are of the same tree – Sprung [Tetrameles nudiflora].
It has been nicknamed as the “Crocodile Tree” 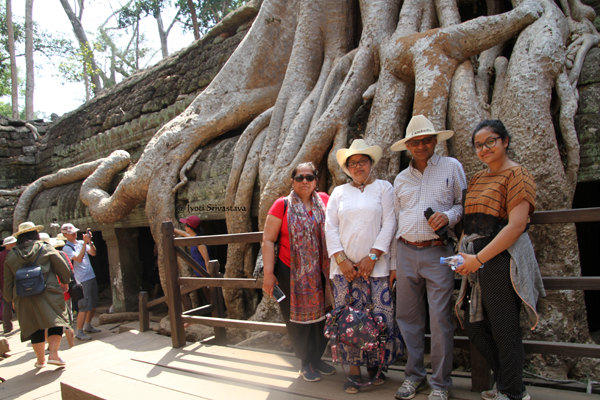 The most distinctive feature of Ta Prohm is the giant trees growing out of the ruins. Ta Prohm has many courtyards and narrow corridors. Many of the corridors have delicately carved stone blocks, but are  dislodged by the giant roots of  trees. Bas-reliefs on walls are carpeted with lichen, moss and creeping plants, and shrubs sprout from the roofs of monumental porches. Trees, hundreds of years old, tower overhead, their leaves filtering the sunlight and casting a greenish pall over the whole scene.

Two of the most popular trees are “Crocodile Tree,” and “Tomb Raider Tree.”  The most popular of the many strangulating root formations is the one on the inside of the easternmost gopura (entrance pavilion) of the central enclosure, nicknamed the Crocodile Tree. One of the most famous spots in Ta Prohm is the so-called ‘Tomb Raider tree’, where Angelina Jolie’s Lara Croft picked a jasmine flower before falling through the earth into Pinewood Studios.

Two species of trees predominate: the larger is either the silk-cotton tree (Ceiba pentandra) or thitpok Tetrameles nudiflora. The smaller is either the strangler fig (Ficus gibbosa) or gold apple (Diospyros decandra).

Angkor scholar Maurice Glaize observed,
“On every side, in fantastic over-scale, the trunks of the silk-cotton trees soar skywards under a shadowy green canopy, their long spreading skirts trailing the ground and their endless roots coiling more like reptiles than plants.” 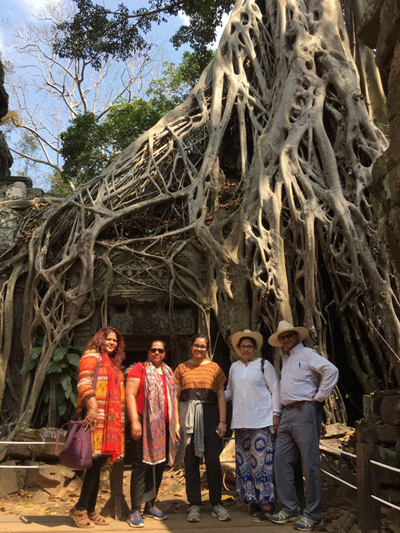 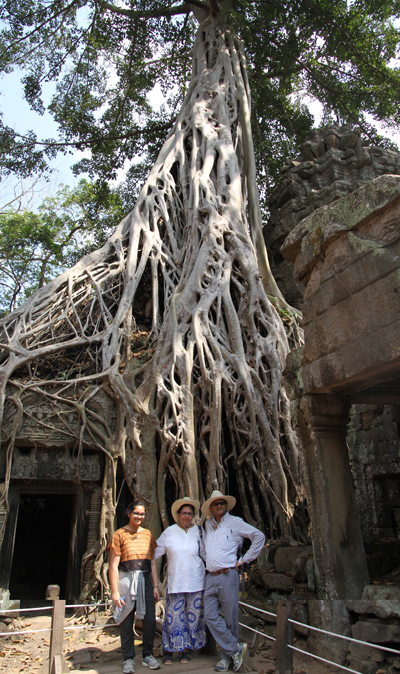 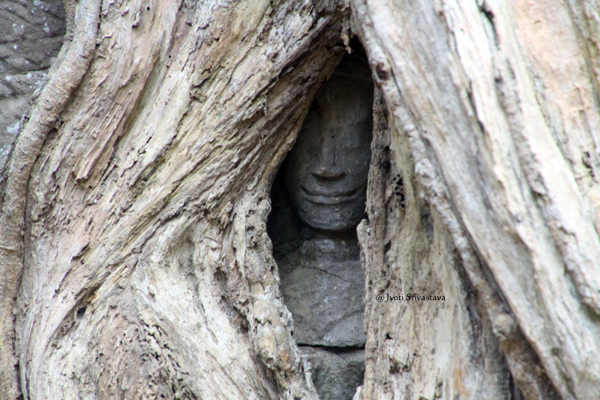 Can you find the above face in the tree below?
Hint: In a niche just above my signature. 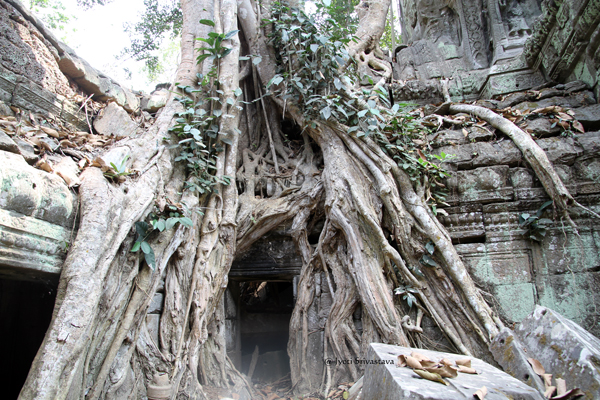 Can you find the above face in this tree ? / Ta Prohm temple complex / Siem Reap, Cambodia. 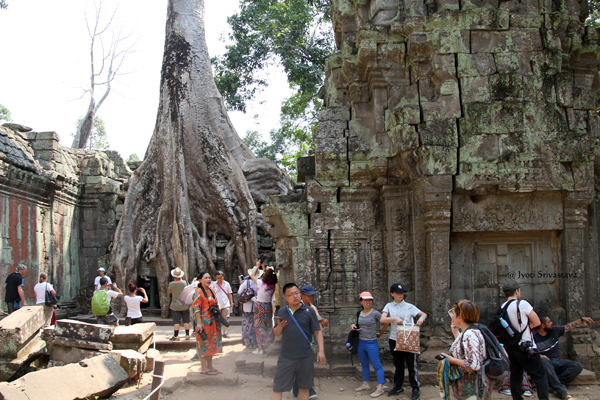 Although Ta Prohm is famous for giant trees, there are some interesting carvings on the walls.
Most famous are “the Great Departure,” and also carving of “Dinosaur” on the wall. 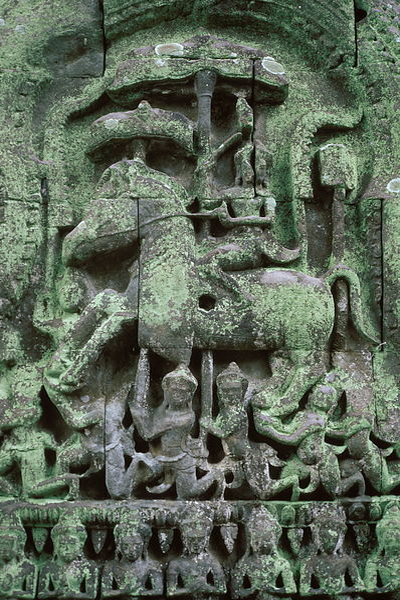 Carved sandstone pediment showing the Great Departure – when the prince Siddhartha leaves his palace and city,
on the quest that ends with him becoming the Buddha – at the ruins at Ta Prohm temple complex. 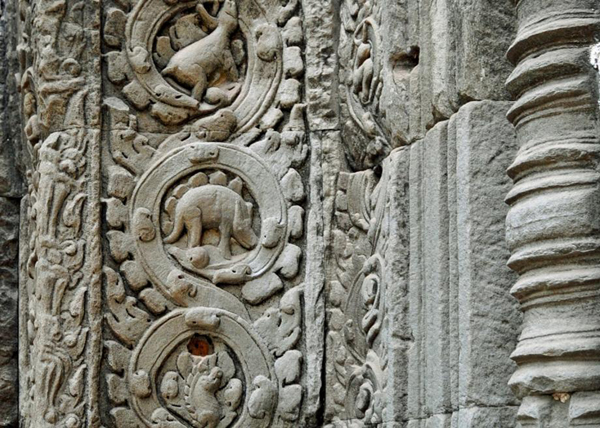 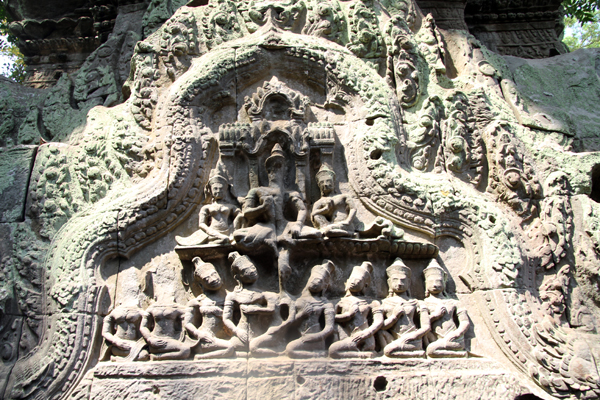 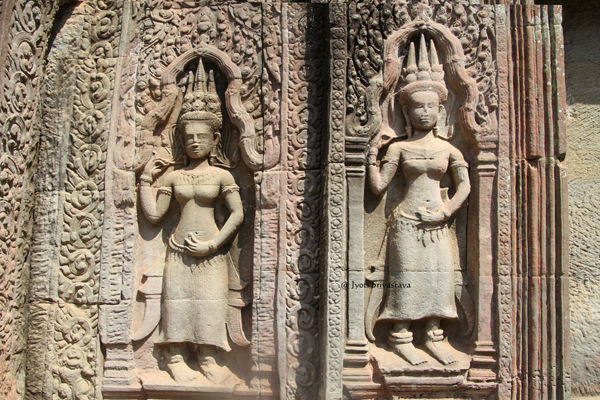 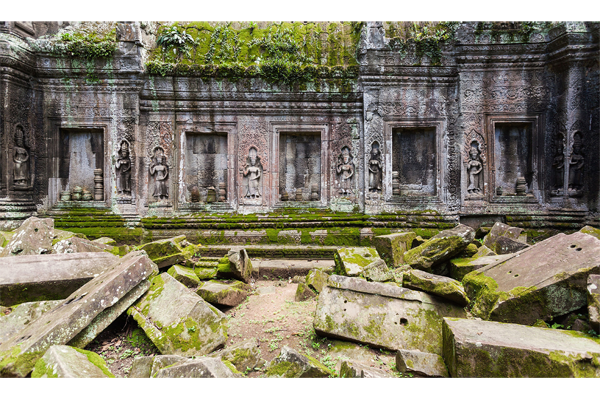 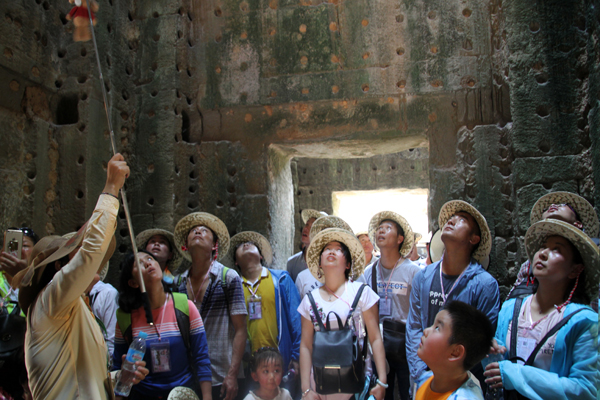 The temple had amassed considerable riches, including gold, pearls and precious stones.
These were once carved into the walls, where the holes are. 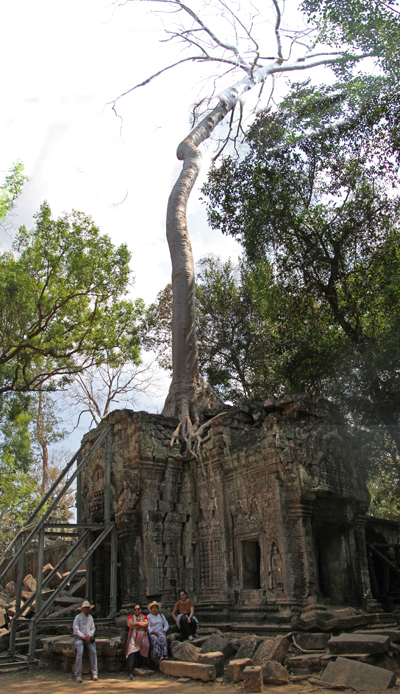 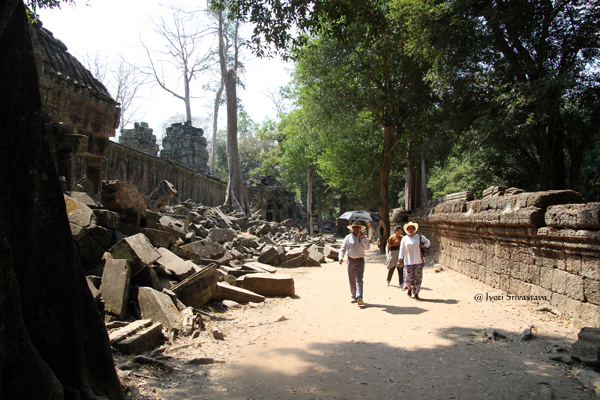