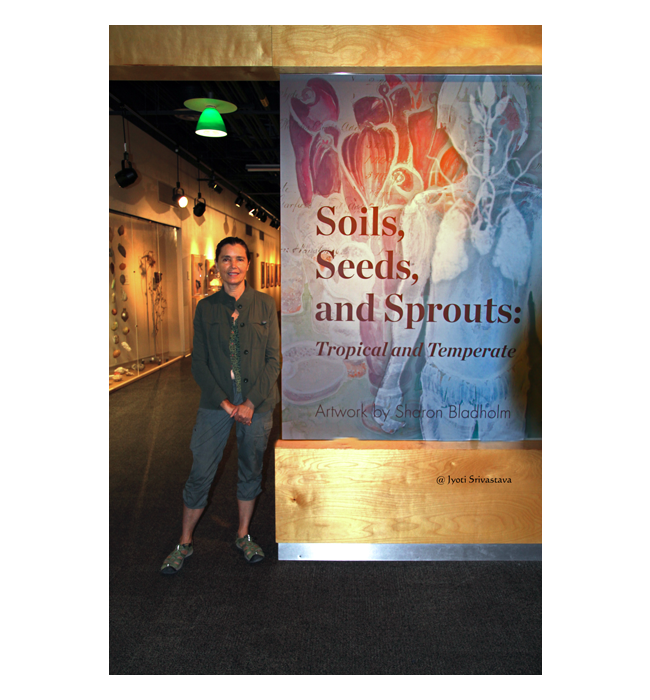 Sharon Bladholm works in bronze, glass, ceramic, and on paper. Her art integrates science, and nature with art. The exhibition is a celebration of life. 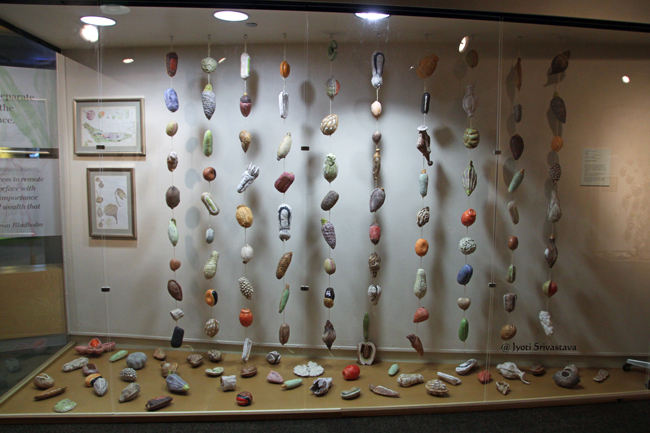 “man… despite his artistic pretensions and many accomplishments… owes his existence to a six-inch layer of topsoil and the fact that it rains.” There is a lot of wisdom in the words of John Jeavons, cofounder of the group Ecology Action and the father of the modern biointensive gardening movement.

Soil plays a vital role in the survival of not only human beings, but of all living beings on the earth.  Yet many of us are barely aware of soil ecology. But then, there are some artists who see beauty in soil and the various microorganisms present in it.  They study it like an enthusiastic science student, and then use their artistic skills to draw, paint or sculpt their observations, so we can enjoy and learn from thier art! Sharon Bladholm is one such artist!

Sharon Bladholm integrates the disciplines of nature, science, conservation and art into a seamless visual experience. What better place to have her exhibition than Chicago’s premier nature museum – Peggy Natebaert Nature Museum. She works in bronze, glass, ceramic, and on paper and her artwork in all these mediums are at display in the exhibition. 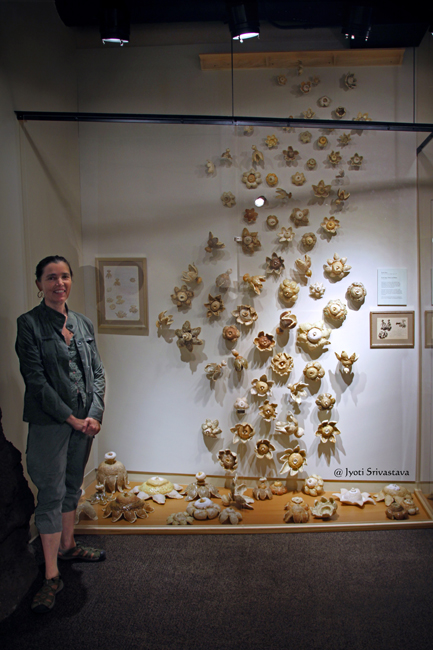 Earth Stars: Above and Below / Soils, Seeds, and Sprouts: Tropical and Temperate – Artwork by Sharon Bladholm

Earth Stars: Above and Below

This large installation of Earth Stars was made specifically for this exhibition. If you are like me, you probably are wondering about earthstars – what are these? How are they related to earth soil? The so called “earth stars”,  or “geostars,”  are actually puffball fungi. These grows in association with a broad range of trees, and have beneficial symbiotic relationships with plants or other organisms. Earth-stars helps the trees extract nutrients, particularly phosphorus from earth; and in exchange, the fungus receives carbohydrates from photosynthesis. These are found all over the world. In the words of Bladholm, “I have found earth stars in the Peruvian rainforests, and while waterning my own houseplants. The name comes from geo, meaning earth, and aster meaning star. I love the poetic idea that they are both of the heavens and the earth, and to me they become a symbol of Gaia and all it contains.”

Bladholm further adds, “I first learned about Earth Stars in Dr V. J. Staneks 1955 book Beauty in Nature which had a mysterious insert, complete with illustrations stating; “The author is now writing a scientific study of earth stars and would be grateful for any consignment of dried or even crumpled specimens.” This fascination began over 30 years ago.” 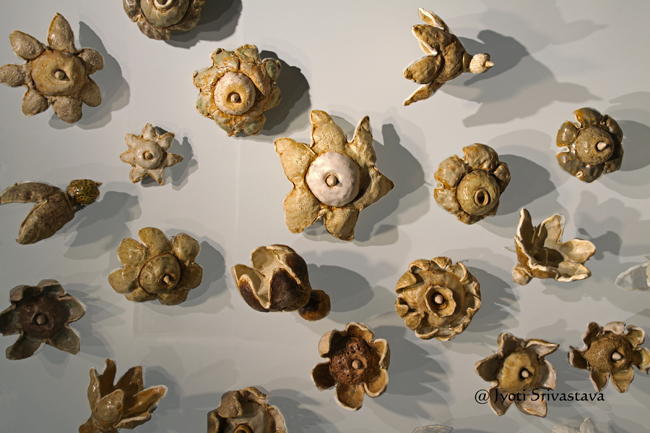 Earth Stars: Above and Below / Soils, Seeds, and Sprouts: Tropical and Temperate – Artwork by Sharon Bladholm 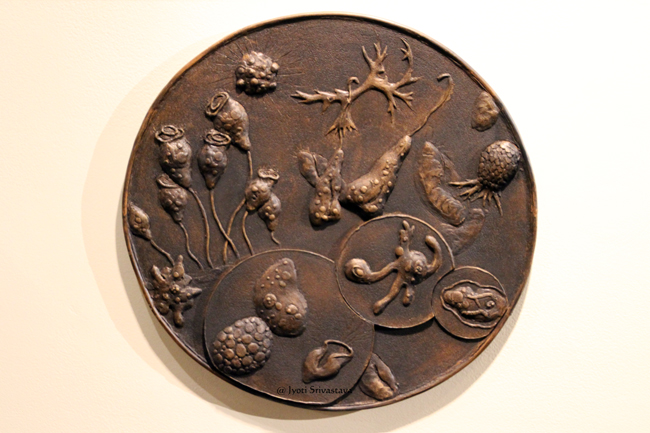 Interestingly, the microbes on earth are more than the stars in the universe. Many of the soil microbes perform life-sustaining functions on earth. Like bacteria are responsible for the process of nitrogen fixation, by converting atmospheric nitrogen into nitrogen-containing compounds like ammonia, that are used by plants. Protozoa play an important role in mineralizing nutrients, making them available for use by plants and other soil organisms. Healthy soil microbes make for healthy people. Although these microbes provide useful services to us, we are barely aware of how they look. The exhibition throws light on soil microbes – bacteria, protozoa, fungi, bdelloid rotifer, algae, springtails, tardigrades and mites.  Bladholm’s series on microorganisms was originally commissioned for Openlands Lakeshore Preserve in Highland Park, Illinois. It’s a lovely art and nature destination with other permanent art installations in the ravine and hiking trails along the lake. 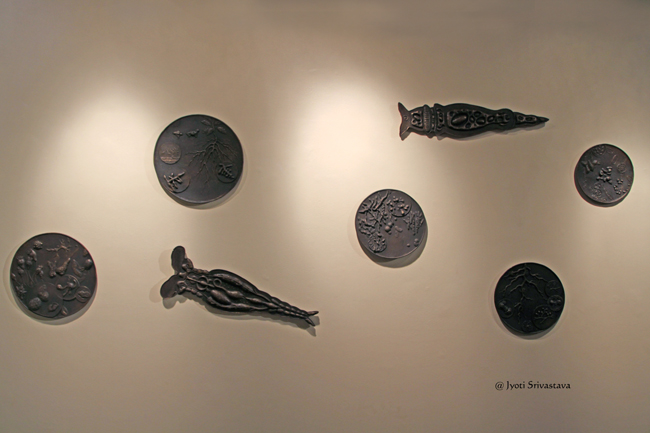 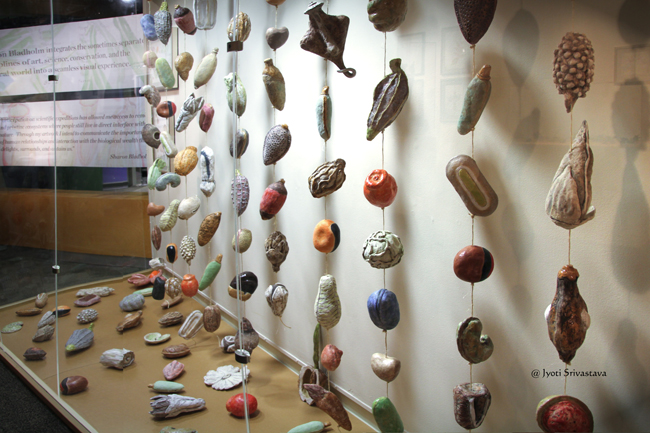 Seed Rain: If this installation evokes the feeling of a quiet rain of seeds, it is indeed so. It shows about 65 seed species – both tropical and temperate – that are pouring down on earth. Seed Rain installation was inspired by the use of the term Seed Rain by restoration biologist Karen Holl. Seed Rain helps in the regeneration of forests. “When I read that Charles Darwin once sprouted 537 seeds from 3 tablespoons of pond mud, “all contained in a breakfast cup,” I decided to include seed bank.”

Methuselah is the only sprouting seed in Seed Rain and represents a 2000-year old seed recovered from the ancient Masada fortress in Israel that was successfully sprouted in 2005. This type of Judean Date Palm was extinct for 1000 years and has medicinal  properties that other varieties do not appear to share. Elaine Solowey, who sprouted the original is working on a whole grove!

Seed Bank: The soil seed bank is the natural storage of seeds, often dormant, within the soil of most ecosystems. The study of soil seed banks was pioneered by Darwin in 1859. Fields interested in soil seed banks include forest regeneration, restoration ecology and agricultural science.

This installation of Seed Banks, like Earth Stars, has been specifically created for this exhibition. 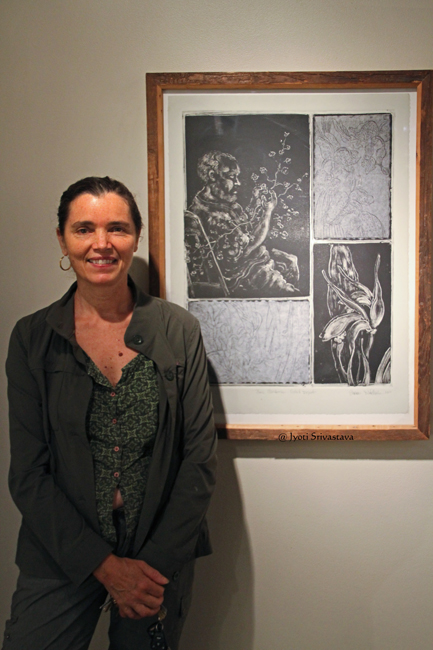 Sharon Bladholm’s art work has been profoundly influeneced by her scientific expeditions to the biologically diverse ecosystems of the Peruvian and Brazilian Amazon.  The Monotype Series in the exhibition are from these expeditions. The Rio Pastaza Aqua RAP [Rapid Assessment Program] Expedition in the Peruvian Amazon was co-sponsored by the Field Museum and Conservation International. They discovered 44 new species of fish in the expedition.  Bladholm was the artist for the expedition, documenting fish, forests, plants and scientists at work in the field. The other interesting expedition was with John Janovec and Eric Christensen, collecting rare orchids in the remote rainforest area of Peru,  where 30 new-to-Peru and 5 new-to-science orchids were discovered.

“Participation on scientific expeditions has allowed me to access to remote and pristine ecosystems where people still live in direct interface with nature. Through my artwork I intend to communicate the importance of human relationships and interactions with the biological wealth that delights, surrounds and sustains us.”

The exhibition includes six work from Bladholm’s Monotype Series, of which,  two images are included here.  Above image shows Eric Christensen identifying orchids. Eric Christensen was a taxonomist extraordinaire and expert on the orchids of Peru, who sadly passed away while I was creating this tribute to him. Below Image is of Pin Hook Bog. This monotype depicts the larger bog habitat as well as the magnificent Orange Fringed Orchid and  Pitcher Plants that flourish there. It is part of the Indiana Dunes but it lies inland and is kept locked except for weekend hours for visitors because of the rarity of its botanical wealth. 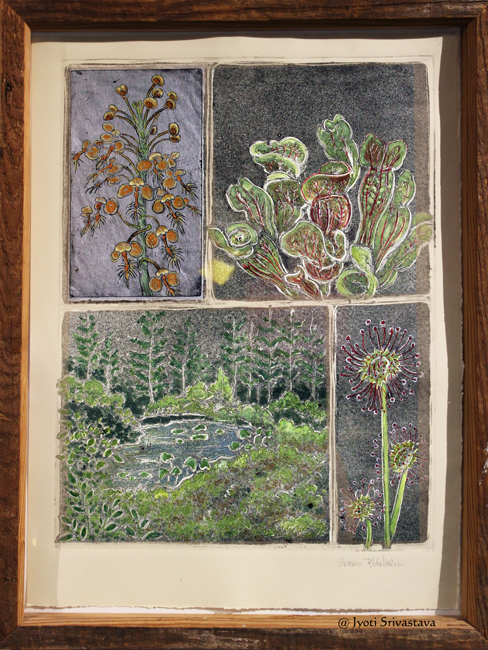 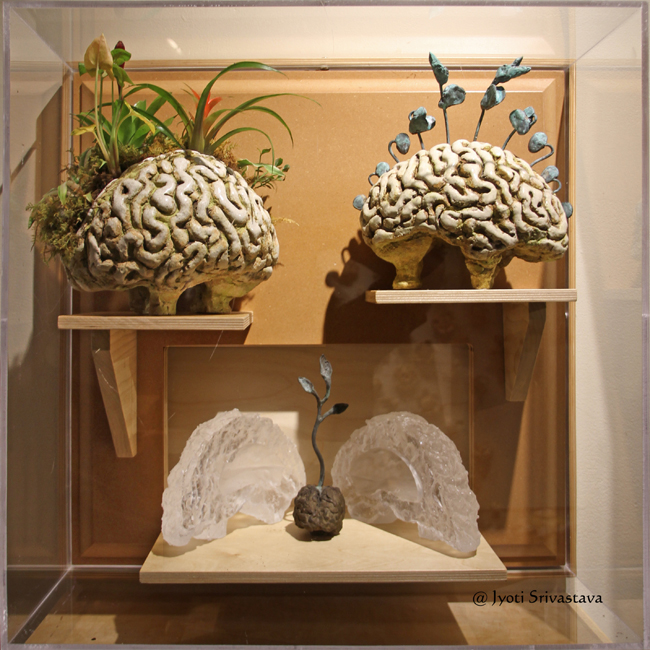 Brain Seedling:  Glass brain with small bronze brain sprouting.
Germinator Brain: Ceramic Brain with bronze sprouts of germinating seeds. This was my original idea, as the furrow of the two lobes looks like a fertile furrow perfect for young seedlings to push up through.
bRAINFOREST: Open ceramic brain planted with real miniatire tropical plants. In this pieces we see the full blown rain forest that nurtured human life emerging from the balanced brain.

The artist explains that the 3 brain sculptures are informed by the concept of Biophilia, “innate love of life or living systems”, a hypothesis put forth by the eminent biologist, E.O. Wilson.

“I was thinking about the idea that our brains have been hardwired for millennia to receive communications from and interface with the natural environment we are part of. If we do interact more fully with the natural world, especially the plant life that supports and nourishes us, we can co- create ways to in turn protect these natural systems and species.”

Talking further about the sculptures, she says,
I originally intended to create an entire brain sculpture, similar to the original beeswax brain I sculpted for an installation at the Garfield Park Conservatory, but on spontaneous intuition I grabbed a large kitchen knife and bisected the whole brain, I had just made a still warm wax cast of from my rubber mold, into two lobes. Inside I found two beautiful forms that reminded me of the inside of a seed as well as the inner portion of the brain. I thought about sculpting a seed, and then remembered I had already created a tiny brain for another piece, Intelligent Heart and added the sprout to the mini brain and cast it in bronze.

Strangely, as I was working on “Brain Seedling”, I ordered the book,” Return to the Brain of Eden, Restoring the Connection between Neurochemistry and Consciousness”, coauthored by Tony Wright and Graham Gynn. It is a ground breaking book that looks at how our brains expanded at an increasingly rapid rate and then 200,000 year ago abruptly stopped. They explain how for millions of years early forest dwelling humans primarily consuming the hormone rich sex organs of plants, (the fruit), each containing a highly complex biochemical cocktail evolved to influence DNA transcription, rapid brain development and elevated neural and pineal gland activity. They also discuss how our loss of this diet and leaving the forest environment led to a progressive neurodegenerative condition characterized by aggressive behaviors, a fearful perception of the world and suppression of higher artistic, mathematical and spiritual abilities. 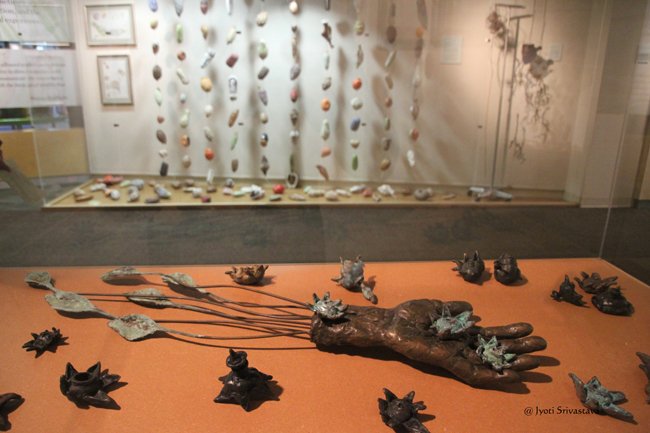 It is obvious by now the Sharon Bladholm’s art is deeply rooted in nature, science, exploration, and conservation. She is a multi disciplinary artists working in glass, bronze, ceramic and on paper. She runs Opal Glass Studio since 1983. She has completed many public and private commissions. Her work has been exhibition in many gallries and museums across the country. Sharon often teaches in workshops, presents lectures and is involved in residencies at schools. In 2016, she was the first Artist in Residence in the Amazon with Project Amazonas, spending several weeks at the forest preserve near Iquitos, Peru. 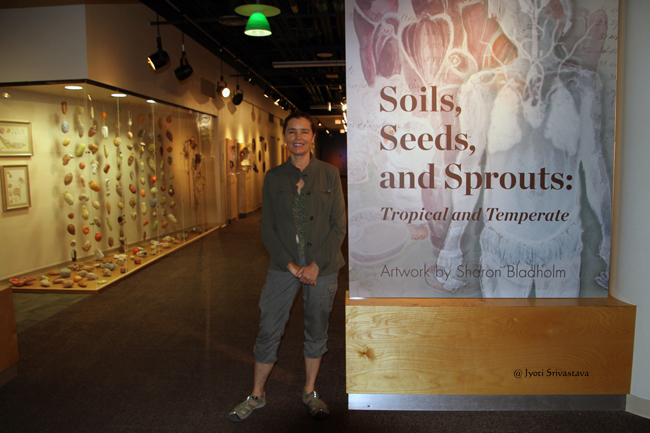 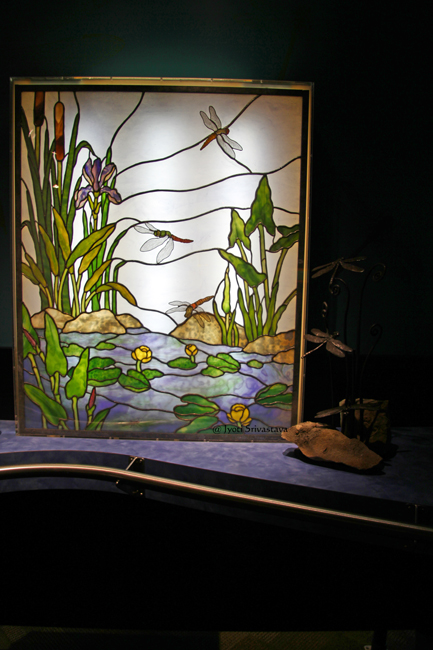 The Nature Museum also has a sculptural work by Sharon Bladholm. She was commissioned in 2008 to create both bronze and stained glass art for the “Mysteries of the Marsh” permanent exhibit.