2017 MCA Exhibition: Takashi Murakami: The Octopus Eats Its Own Leg 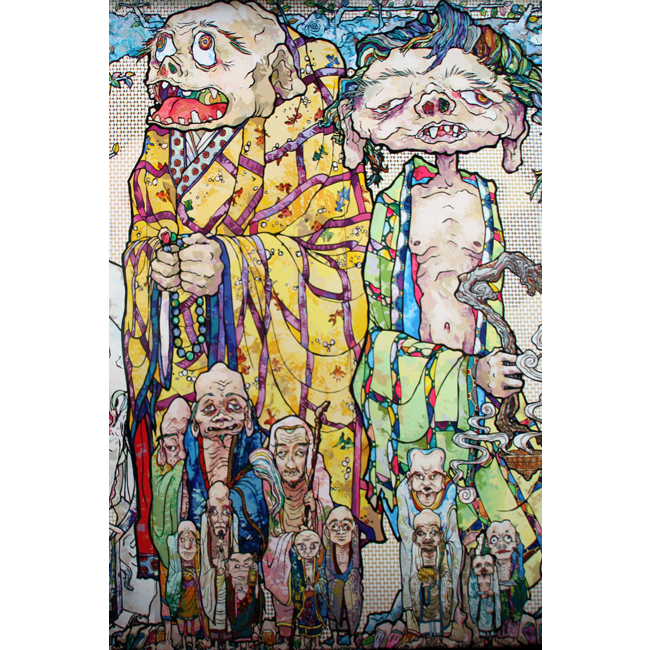 The exhibition is a major retrospective of Takashi Murakami paintings, featuring fifty works that span three decades of his career, from the artist’s earliest mature works—many of which are being shown in North America for the first time to his recent, monumentally scaled paintings. 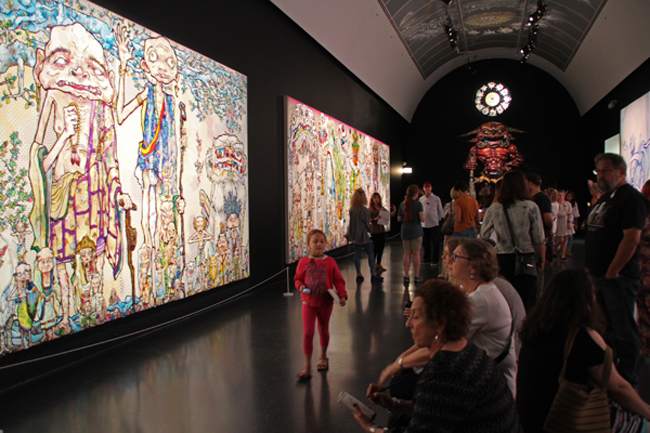 A well received exhibition / Takashi Murakami: The Octopus Eats Its Own Leg

Takashi Murakami [born February 1, 1962] is perhaps one of the most famous Japanese contemporary artist.   He works in fine arts media (painting, sculpture) as well as commercial media (such as fashion, merchandise, and animation).  He draws on hundreds of year of traditional Japanese and Asian painting traditional, materials and techniques to reflect and portray contemporary work in all its complexities. He is known for blurring the distinction between high and low arts. Over time his process has expanded so much that he has established a studio of assistants to support the meticulous craftsmanship and many stages of drawings, computer renderings, silk screens and paintings.

The exhibition is a major retrospective of Takashi Murakami paintings, featuring fifty works that span three decades of his career. It features many of artist’s earliest works— many of which are being shown in North America for the first time – to his recent, monumentally scaled paintings, including never seen before paintings, that he made specifically for this exhibition..

Here I share are some of the things that I enjoyed and learnt at the exhibiton.

First I was intrigued by the meaning of the exhibition name – “The Octopus Eats Its Own Leg.” It was taken from a Japanese folk saying about an octopus in distress that chew off its damaged leg for survival, knowing that a new one will grow in its place. Murakami recognizes this octopus story as a metaphor for his own artistic process.  He designs a piece, and  then work on the same theme by repetition, altering color, design and expressions a little bit.  Once in a while there is a new idea or an inspiration and then a little progress is made. It’s just like an octopus who’s really hungry, but there’s really nothing around them. They just have to eat their own leg to survive, until they by chance find that way to progress and reach that next step. 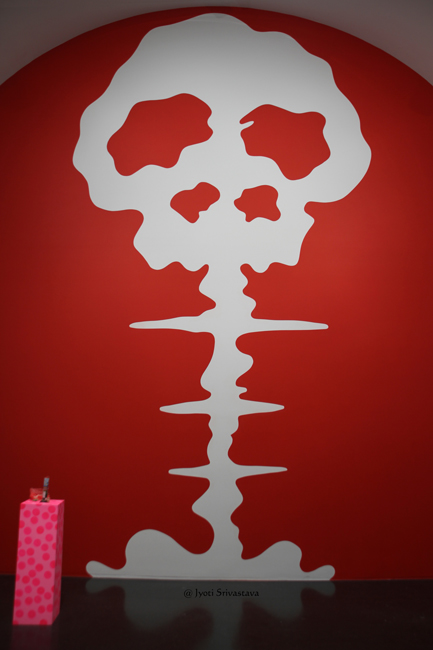 The exhibition is arranged chronologically. It begins with some of his early work, and ends with his most recent works that he created  for this exhibition. Murakami was deeply influenced by some tragic events in Japan, like the bombing of the cities of Hiroshima and Nagasaki, during World War II. The wall scale painting Time Bokan [1993] is one of the first of many variations on the mushroom cloud that evovled into skull motif. Mushrooms and skulls are recurring motifs in his paintings. Mushrooms prominently in his Super Nova [1999] painting. Here mushrooms appear surreal and hallucinogenic. The seven panel painting was the largest at the time. He made it in his studio with a team of artists, whi used computer files, stencils and later silk screens to generate mulktiple versions of his stock character. The work inaugurated a new collaborative process for the artist. 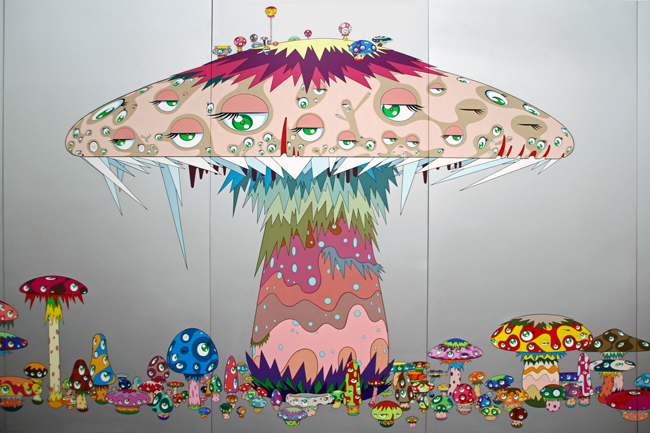 To fully appreciate Murakami art, one has to understand some factors that influence his greatly and some terms associated with his art: like Mr. DOB, Sperflat Art and Arhats. 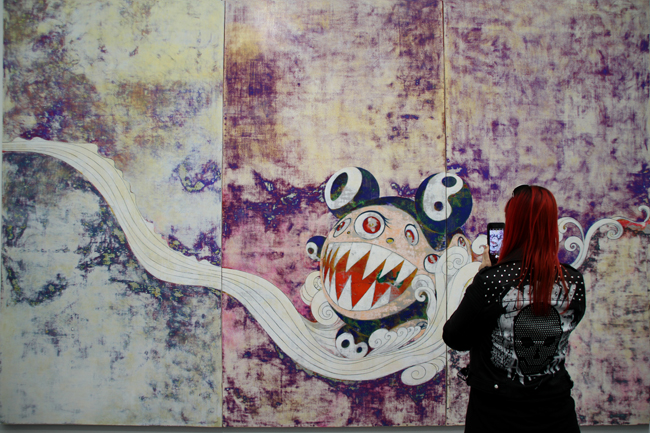 Mr. DOB is a whimsical sharp-toothed character created by Murakami. It is arguably his first signature creation inspired by anime [animated film] and manga [comic book character]. Mr. DOB has achieved cult status in Japanese youth culture, and can easily recognizable despite its changing appearance.

In late 1990s Murakami developed a new aestehtics that he called Superflat. Superflat is a complex term – it fuses traditional Japanese aesthetics with post-war Japanese culture and epitomized Japanese kitsch. It combines classical Japanese art with contemporary Japanese pop culture.  It draws from a world that is metaphorically flattened by the atomic bomb.  Murakami uses Superflat to refer to various flattened forms in Japanese graphic art, animation, pop culture and fine arts. It also refers to the shallow emptiness of Japanese consumer culture.  Superflat describes a world that blurs the distinction between high art and low culture. Murakami explored Superflat art idea in his mutable character of Mr. DOB, which he continued to mutilate, duplicate, stretch, distort and adapt. 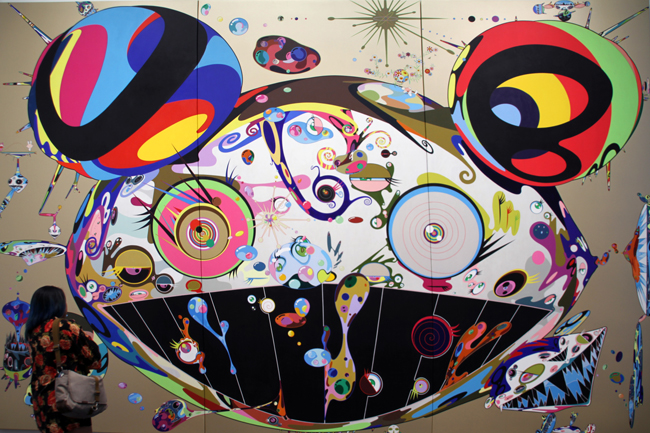 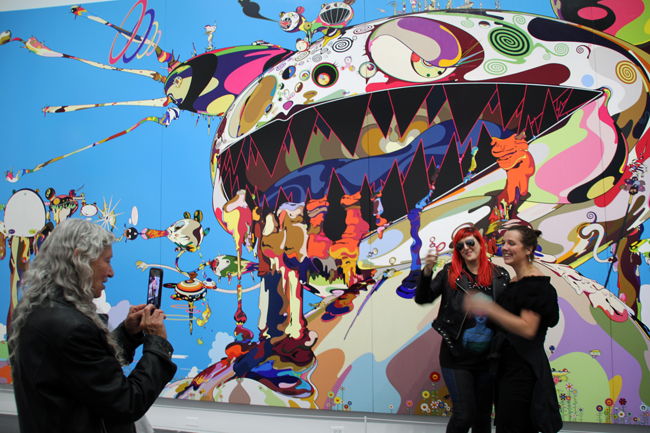 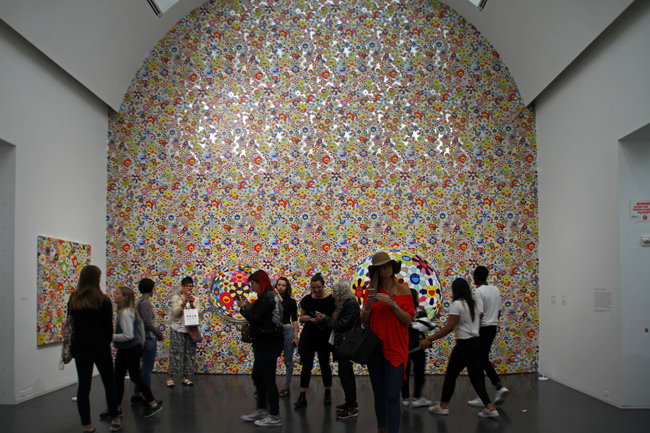 Perhaphs the most popular work of Murakami are these smiley-face flowers, which he popularized in the beginning of the millennium.  Flowerball 2 [2002] and Flowerball 3D [2008] are mounted in front of wallpaper of smiley-faced dasies. On the side is the painting “Flowers, Flowers, Flowers” [2010]. The assemblage creates a sensory overload – I believe that was the intension! 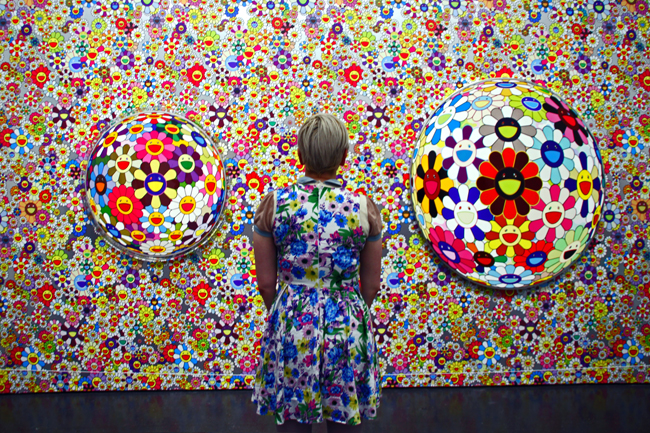 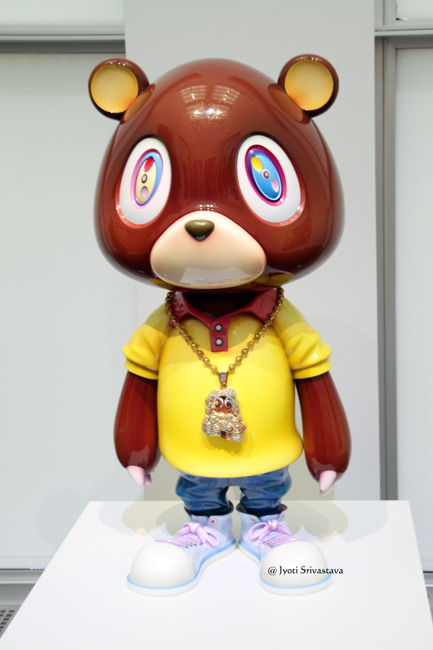 Murakami is Known for his collaborations with pop icon Kanye West and fashion house Louis Vuitton. In 2007, he made the album cover and video animation for Kanye West. He created a central character that was eventually dubbed as Kanye Bear. Murakami later made a sculpture of the bear, wearing a guilded “Jesus piece” necklace popular in hip-hop. From 2003 to 2015, he collaborated with Louis Vuitton to produce its Multicolore Monogram bag, which can be seen in the exhibition. Japanese people accept that art and commerce will be blended; and, in fact, they are surprised by the rigid and pretentious Western hierarchy of ‘high art.’ – Takashi Murakami. 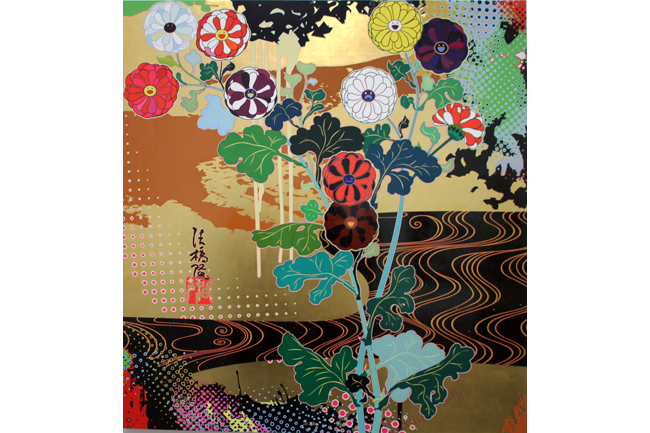 Smiling technicolor daisies are arguable Murakami’s most popular and recognizable paintings. But he often went back to traditional style painting, like in Kansie Gold,  he painted chrysanthemums the royal flower of Japan, on decorative background. The more naturalistic stalks of the flowers and the stylized flowing rivers marks a shift away from the Pop art to his earlier style. 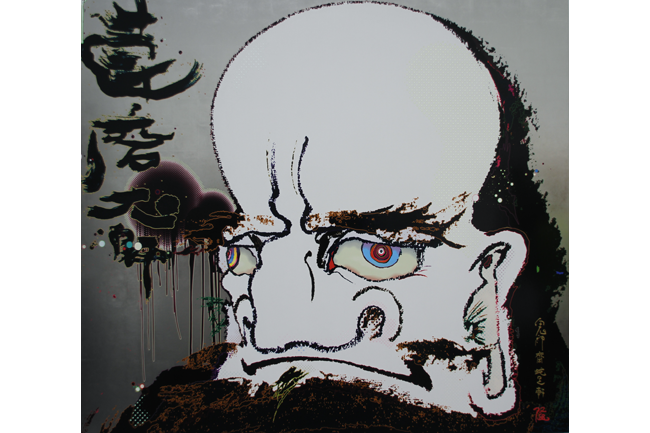 From the perceived debris of the universe, we are still unable to reach the stage of nirvana [2008]

“From the perceived debris of the universe, we are still unable to reach the stage of nirvana”  [2008] – In this painting Murakami shifted to more historic style, rediscovering the tradition of Buddhist artwork, like the 18th and 19th century ink drawings of the zen patriach Daruma. With the help of studio assistants Murakami amplified the traditional calligraphy by silk-screening the image on metallic background, recalling Nihonga style. 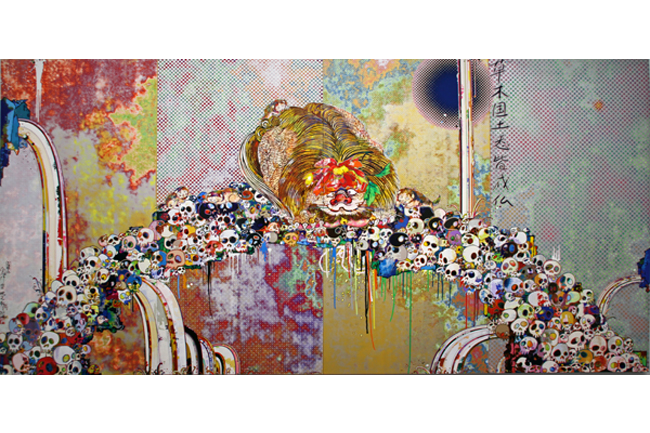 Of Chinese Lions, Peonies, Skulls, and Fountains [2012] – by Takashiu Murakami

Of Chinese Lions, Peonies, Skulls, and Fountains [ 2012] – In the work, Murakami draws upon the legend of the Karajishi (“China-lion”), which is a mythological animal guarding the threshold of Japanese Buddhist temples. The figure is considered the force that averts evil, inspiring happiness and joy. In the work, Murakami presents skulls streaming away from the central lion figure, a contrast to his iconic joyful flowers. 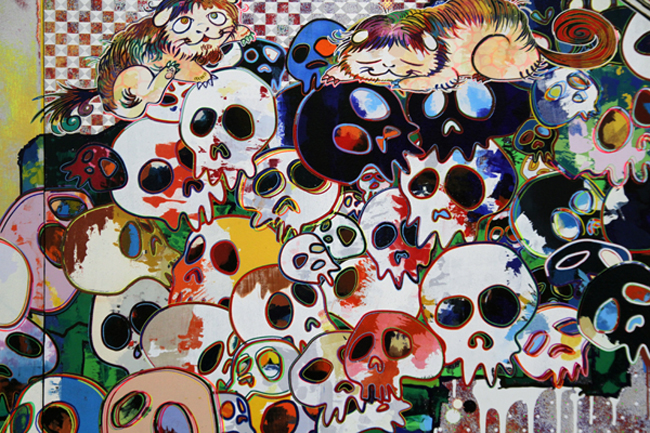 Details – skulls streaming away from the central lion figure / Of Chinese Lions, Peonies, Skulls, and Fountains [2012] – by Takashiu Murakam 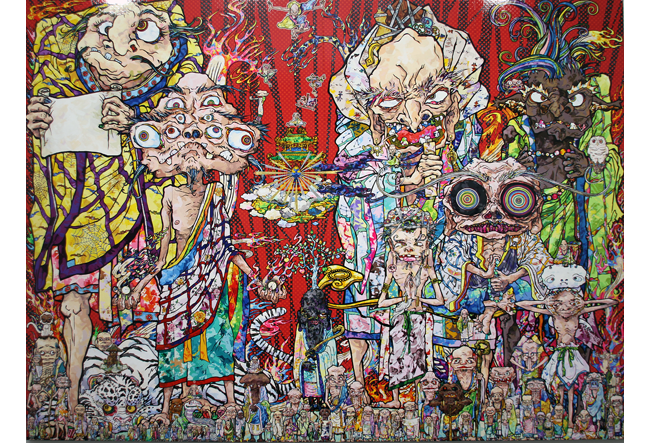 Murakami’s paintings drew heavily from Japan’s traditional style , as well as contemporary culture of comic characters and animation.  His paintings were also deeply affected by events in Japan. Like the 2011 earthquake and the Fukushima nuclear meltdown affected his painting.  The painting “Isle Of The Dead” has grotesque mutant characters. 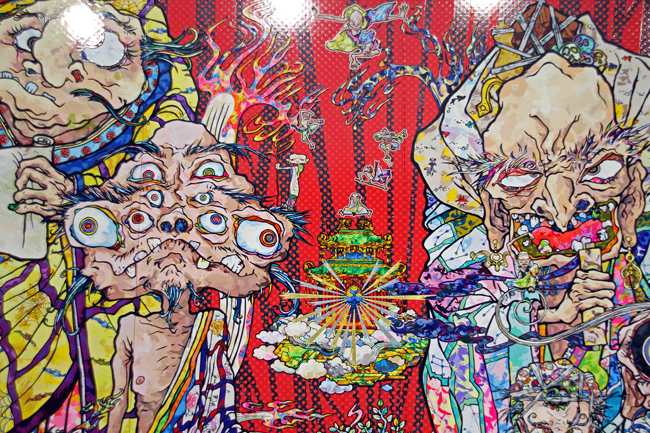 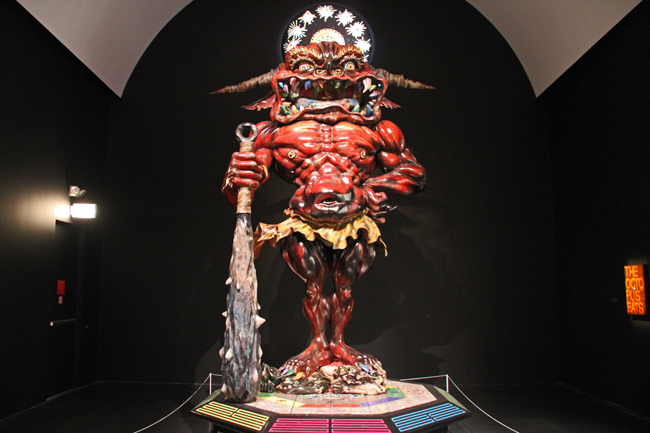 As I move in the exhibition the paintings became more and more complex and detailed. Towards the end, the second-last gallery was the most impressive!  It  had monumental paintings that truly blew my mind. Not only were they huge, but also extremely detailed with many interesting characters. Being in that room was an experience that needs to be felt, not explained. The images does not do justice to be awesomeness of the gallery. There are two monumental demon sculptures at both ends. On one side is the painting “Dragons in Clouds – Indigo Blue” [2010]. One the other side were two monumental multi-panels paintings  “69 Arhats beneath the Bodhi Tree” [2013], and “100 Arhats” [2013].

This brings us to Arhat. Who is an Arhat? In Buddhism, an arhat is a person who had completed the path to enlightenment. They had supernatural powers and were often healers in the community. Originally there were 16 arhats, who were disciples of Buddha. After seeing the death and destruction in Japan, Murakami started painting arhats, as they were healers. He increased the number of arahts to 69 and then to 100. The gallery has two stupendous paintings: “69 Arhats beneath the Bodhi Tree” [2013], and “100 Arhats” [2013]. 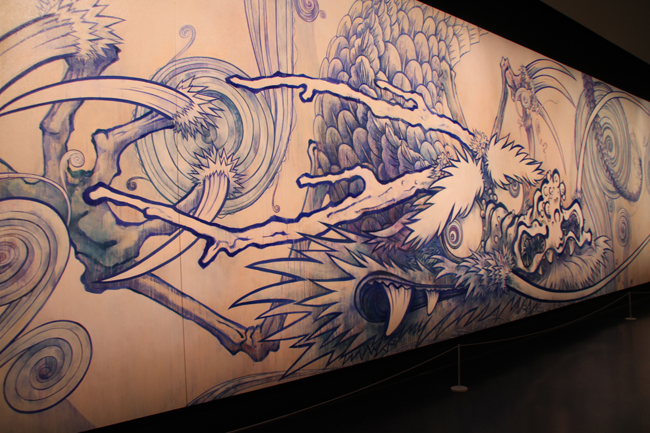 Murakami based this painting directly on the 18th century artist SogacShōhaku’s “Dragon and Cloud.” Though monumental in scale, the work marks a departure for Murakami. it is painted by hand without the laborious layering of silk screenm and high finish of his typical studio process. 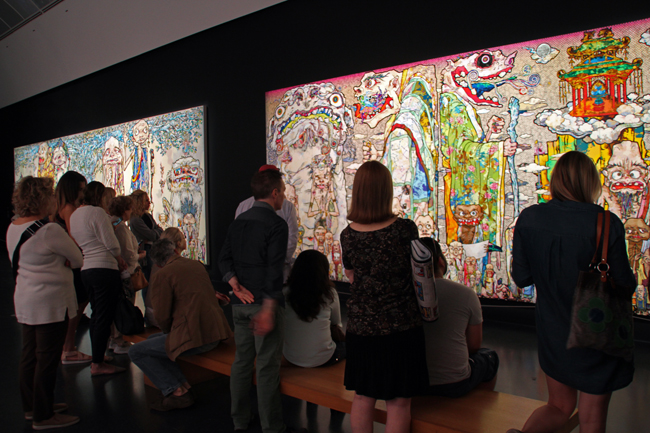 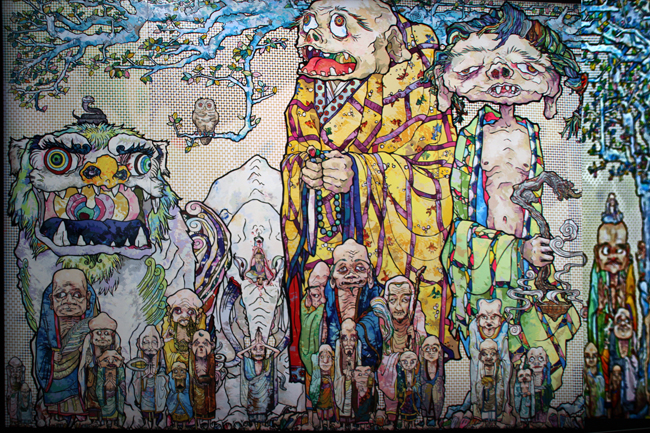 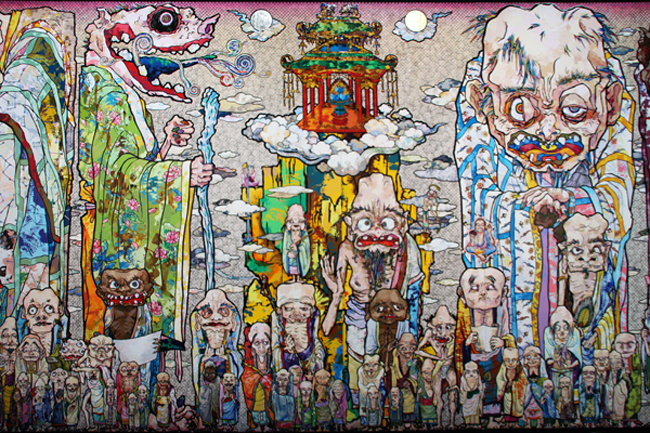 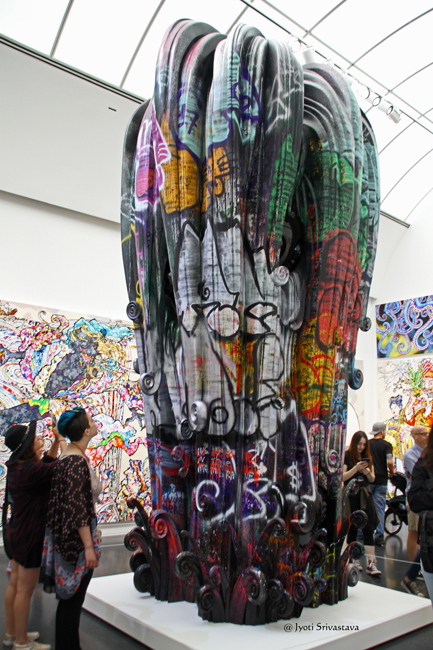 The exhibition ends with some new works by Murakami. These were made expressely for the exhibition. It includes a multi panel painting and a monumental sculpture. The sculpture is based on the 2011 earthqualke in Japan and the tusnami. It depicts a giant, stylized waterspout with profusion of skulls between the waves, recalling human toll from the tragic event. 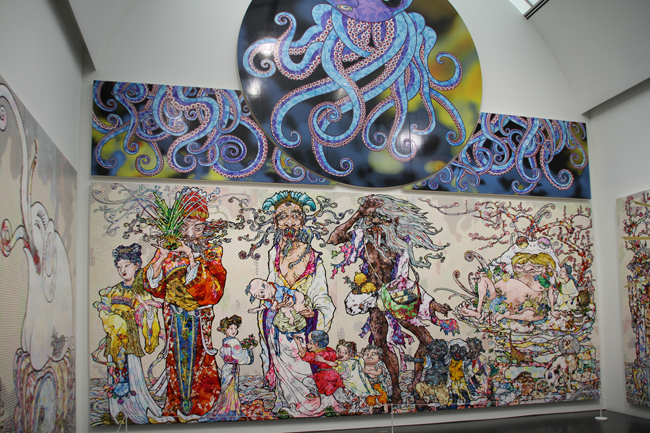 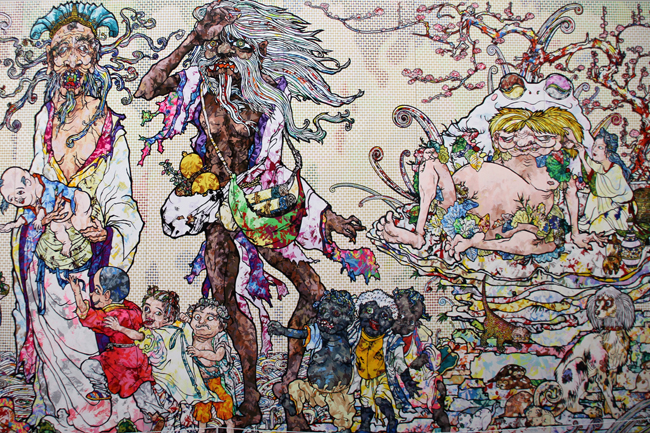 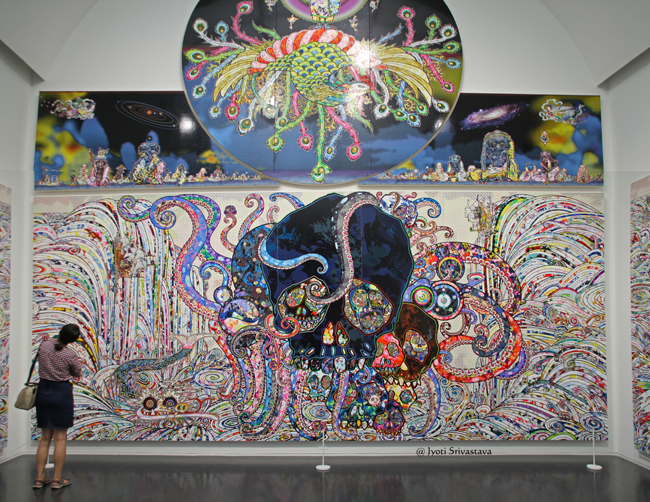