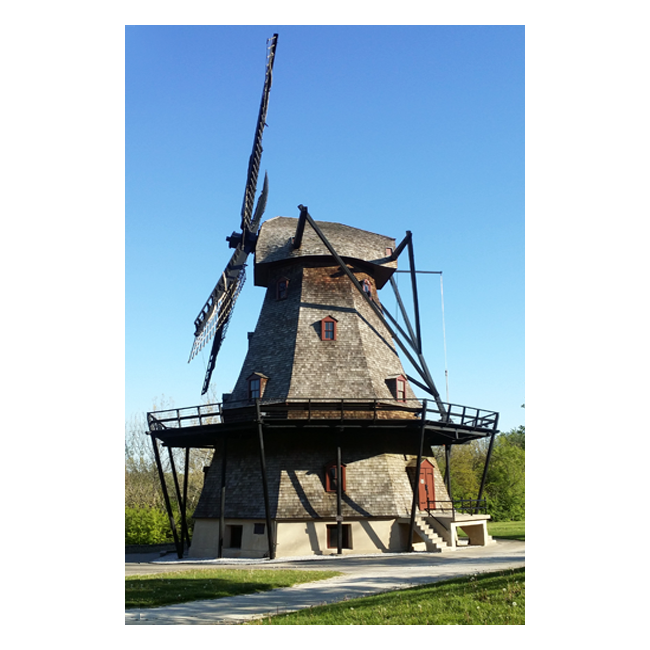 Day Trip: May 8, 2017..  on a beautiful Monday morning, I drove to Fabyan, to see the Dutch Windmill.  Fabyan is located south of Geneva, on the banks of the Fox River. It was less than an hour drive from my Hoffman Estates suburb. I left home by 6:00 am and was there by 6:45 am.

To my surprize I discovered that the place has many more attractions than the Windmills! There were Fabyan Japanese Garden,  Fabyan Villa and also a 100 years old Fabyan Lighthouse! There were visitors fishing along its river shores, jogging or and biking along the trails. There was also a beautiful river bridge. Later I found out that these natural and historic attractions has made Fabyan one heavily used forest preserve in the Kane County. 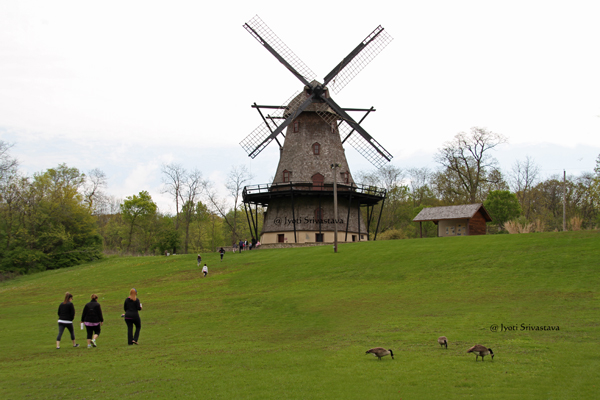 Fabyan Forest Preserve was once part of the large country estate of George and Nelle Fabyan. They came to the Fox River Valley in the early 1900s and bought a farmhouse and 10 acres on the west bank of the Fox River. Over the following 20 years, they acquired 300-plus acres and developed the property into a fabulous estate they called “Riverbank.” After their deaths in 1936 and 1939, the Forest Preserve District of Kane County purchased the estate for this amazing preserve.

George Fabyan was a millionaire businessman,  with a thirst for knowledge. Inheritance from his tycoon-father’s textile business, Bliss, Fabyan & Co. provided the financial foundation from which the Colonel and his wife, Nelle, established their legacy. Riverbank, their estate featured: a Dutch-style windmill, a Japanese Garden, a lighthouse, private zoo, Roman-style swimming pool, greenhouses, gardens, grottoes, a country club, a small farm and a scientific laboratory complex. 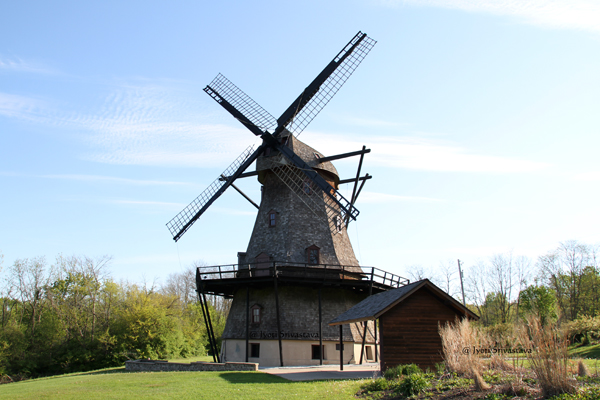 In 1914, the Fabyans purchased a windmill located on a farm near what is now Elmhurst, Illinois and had it relocated to the east bank of the Fox River across from the Villa on acreage acquired that same year. The Fabyan Windmill is unique due to the bakery it houses that according to legend, was used to bake bread for the Fabyans’ pet bears. During war-time rationing, the Windmill was used to grind grain for the surrounding community; a deed that was later honored by means of a U.S. postal stamp. 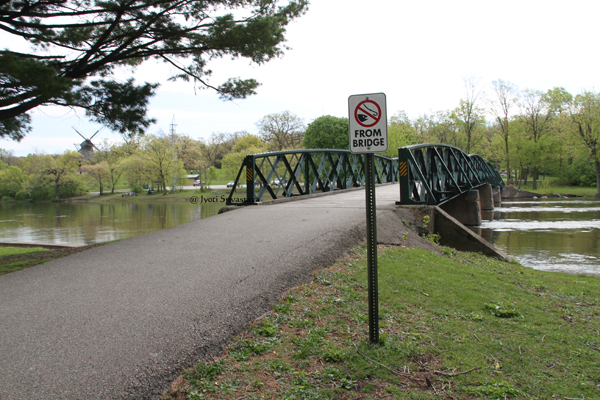 Bridge over the Fox River

Bridge over the Fox River took to the other side of the River. It is here that I discovered other attractions of the Fabyan Forest preserve: The Villa, The Japanese Garden and the Lighthouse! There were also gardens, grottoes, a lighthouse, was also remains of Roman-style swimming pool, and a scientific laboratory complex. Then there was bear cage. Yes Fabyans had two pet bears named Tom and Jerry.

For me, the most important were:
Fabyan Villa .. click here..
Fabyan Japanese Garden, and
Fabyan Windmill … click here..

All these are part of Fabyan Forest Preserve now. 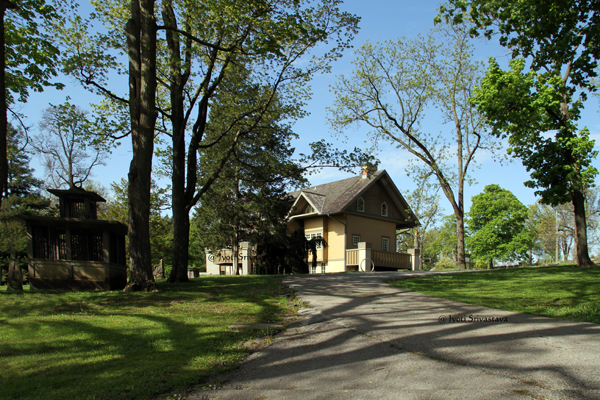 The Fabyan Villa
Redesigned by Frank Llyod Write in 1907.

The mid-1800s farmhouse that the Fabyans acquired in 1905 was dubbed by them, The Villa. In 1907, the farmhouse was extensively redesigned by Wright, who added a south wing, three verandas, and large eaves to achieve a cruciform modestly Prairie-style country house. Other hallmarks of Wright’s organic architecture found in the Fabyan Villa are geometric window motifs, ‘light screens’ (bands of windows), string-coursing, open floor plan, and wood-spindle screening. 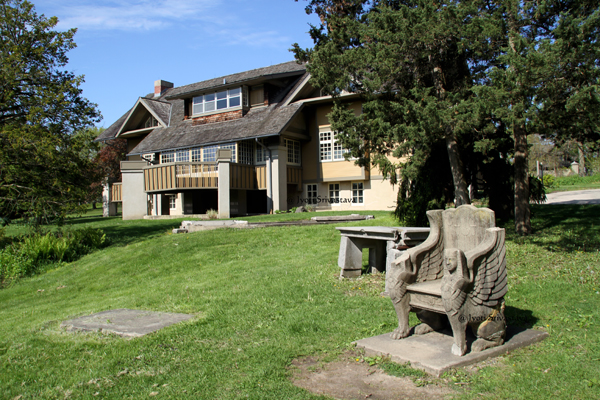 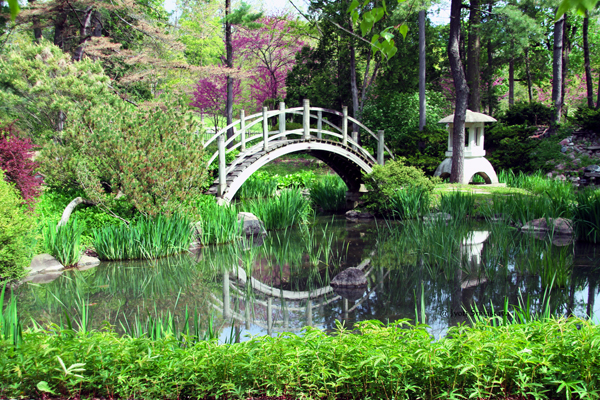 In 1910, the Fabyans hired Taro Otsuka to design a Japanese-style garden below the villa. The one-acre garden was developed over the next several years, and from 1918 on, maintained by Susumu Kobayashi, a Japanese immigrant gardener. Japanese gardens were popular amongst the upper class, and it was a well-known attraction throughout the 1920s and 1930s. Although neglected for decades after the Fabyans, the Fabyan Japanese Garden was renovated beginning in 1974, and today contains restored and replicated original elements including a pond, waterfall, moon bridge, oversized lantern, and teahouse.

Riverbank Laboratories: Between 1912 and 1922, Fabyan created Riverbank Laboratories, the first privately owned research facility in the United States. In fact, the National Security Agency has recognized Riverbank Laboratories as the birthplace of cryptology and has honored Fabyan for his associated services to the United States’ government.[citation needed] Nearly all American military World War I cryptography was done at Fabyan’s laboratories, where Elizabeth Wells Gallup and her staff of assistants, including Elizebeth Friedman and William F. Friedman, had spent several years honing cryptology skills and methodology searching for proof of Sir Francis Bacon’s authorship of Shakespeare’s plays using Bacon’s own ciphers. 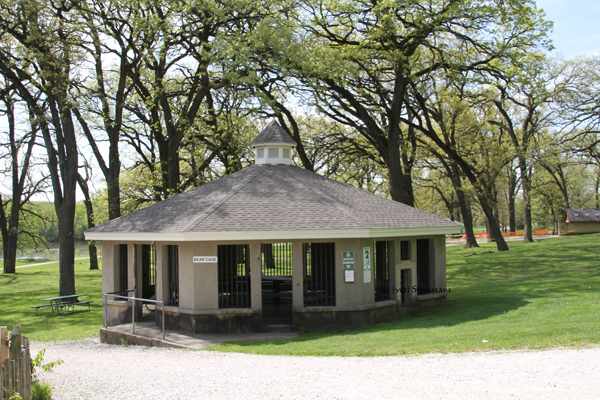 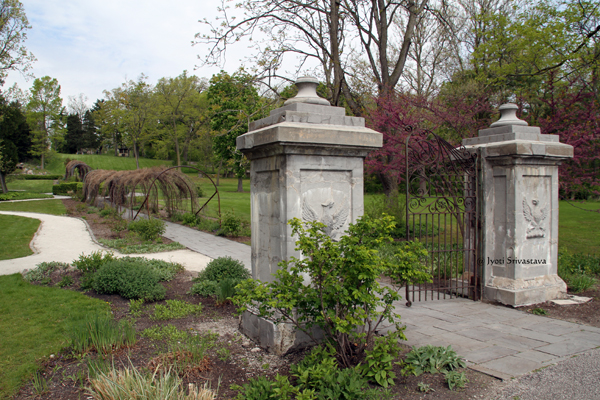 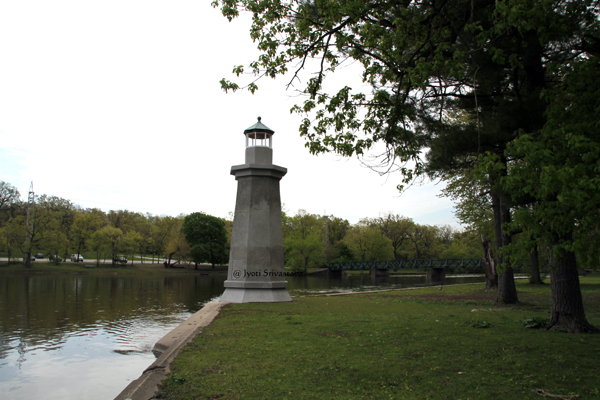