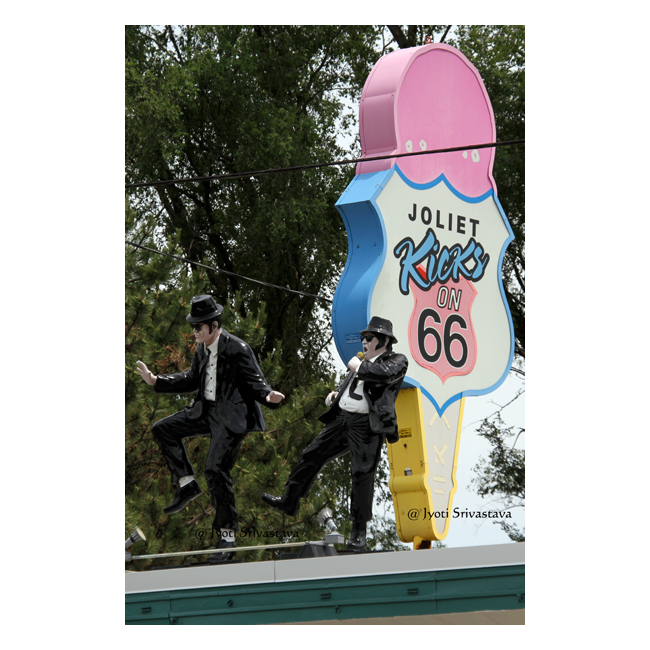 It was one of the original highways within the U.S. Highway System.
US 66 was established on November 11, 1926, with road signs erected the following year.

The highway, which became one of the most famous roads in the United States, originally ran from Chicago, Illinois, through Missouri, Kansas, Oklahoma, Texas, New Mexico, and Arizona before ending at Santa Monica, California, covering a total of 2,448 miles.

US 66 was officially removed from the United States Highway System in 1985, after it had been replaced in its entirety by segments of the Interstate Highway System. Portions of the road that passed through Illinois, Missouri, New Mexico, and Arizona have been designated a National Scenic Byway of the name “Historic Route 66”, which is returning to some maps. Several states have adopted significant bypassed sections of the former US 66 into the state road network as State Route 66.

Route 66 was recognized in popular culture by both the hit song “(Get Your Kicks on) Route 66” and the Route 66 television show in the 1960s. 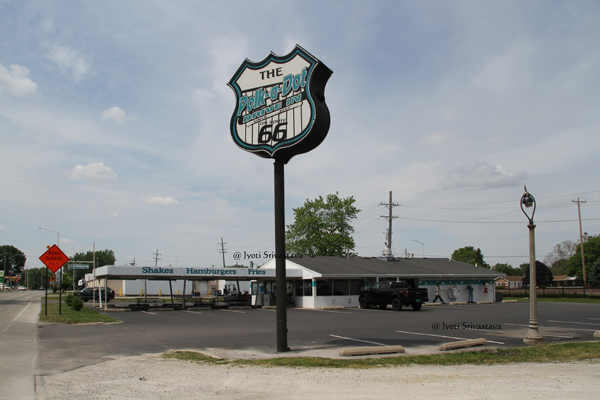 We made 3 stops : Braidwood, Wilmington, and Joliet.

The Historic Route 66  is lined by hundreds of cafés, motels, gas stations, and tourist attractions.
Not to forget the delightfully gaudy roadside attractions of Route 66. 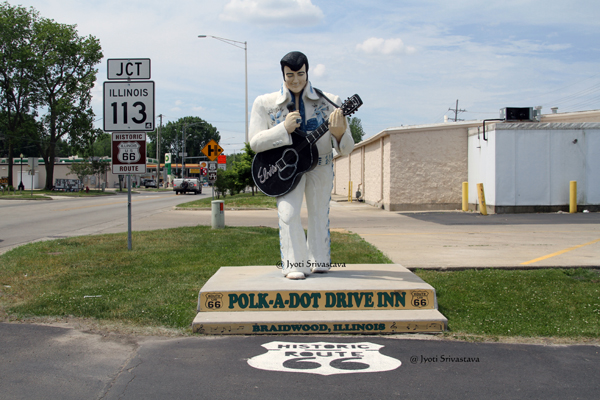 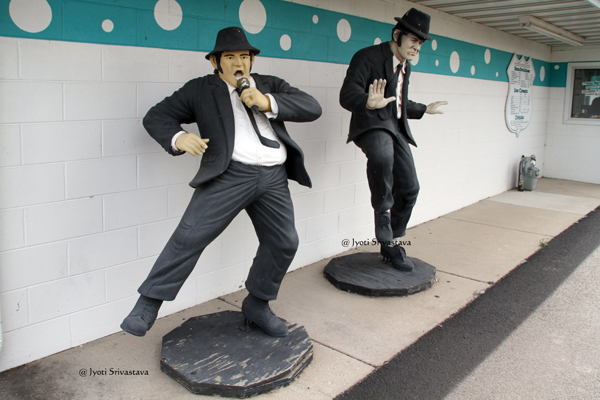 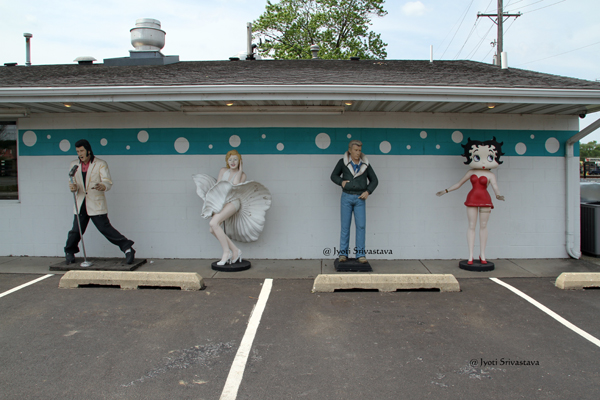 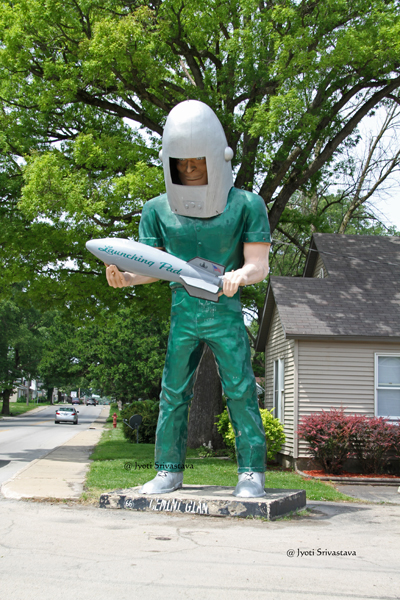 The Gemini Giant is a landmark statue on U.S. Route 66 at the Eastern entrance to Wilmington, Will County, Illinois.
It stands outside the Launching Pad Drive-In restaurant.
The 30 foot tall statue is one of many giant “Muffler Man” advertising props found throughout the USA in the Sixties.
The Gemini Giant is named after the Gemini space program and holds a silver “rocket ship” in his hands, while sporting an astronaut’s space helmet that resembles a welding mask. 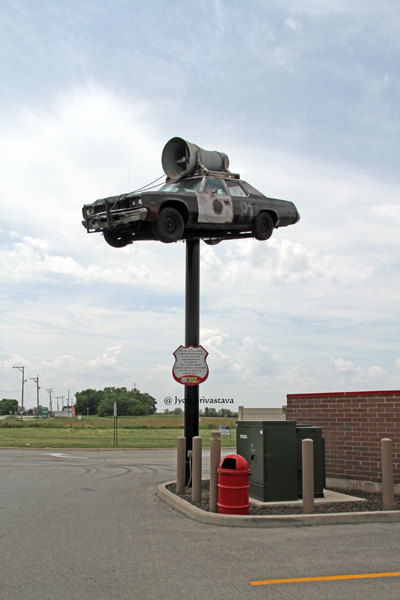 An exact replica of the Blues Brothers’ battered 1974 Dodge Monaco,
complete with air raid siren on its roof, is mounted on a pole above a parking lot.
The plaque on the pole reads:
“It’s got a cop motor a 440 cubic-inch plant. It’s got cop tires, cop suspension, cop shocks.
It’s a model made before catalytic converters so it’ll run good on regular gas.” 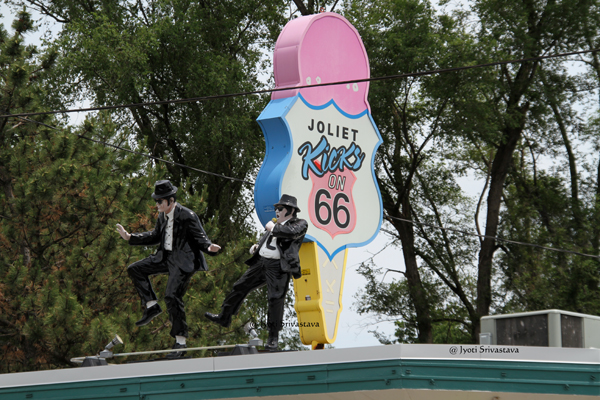 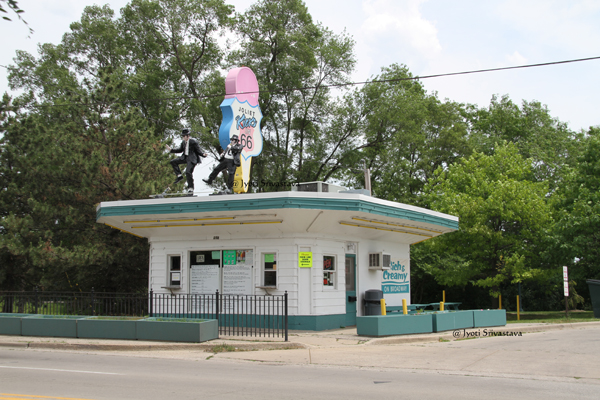 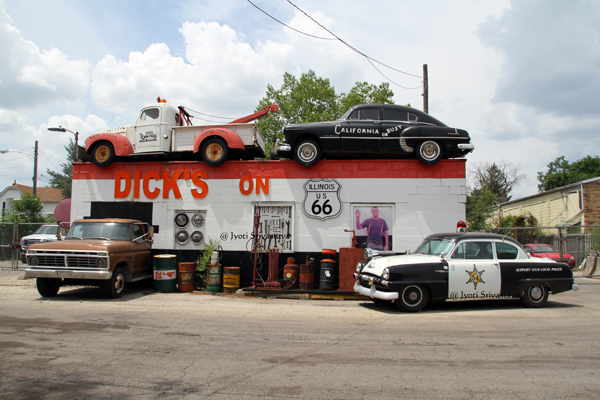 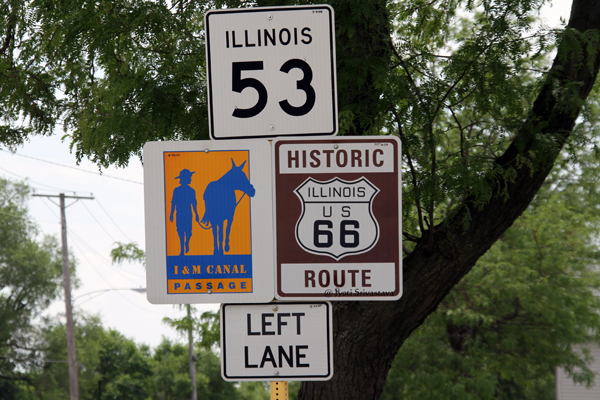