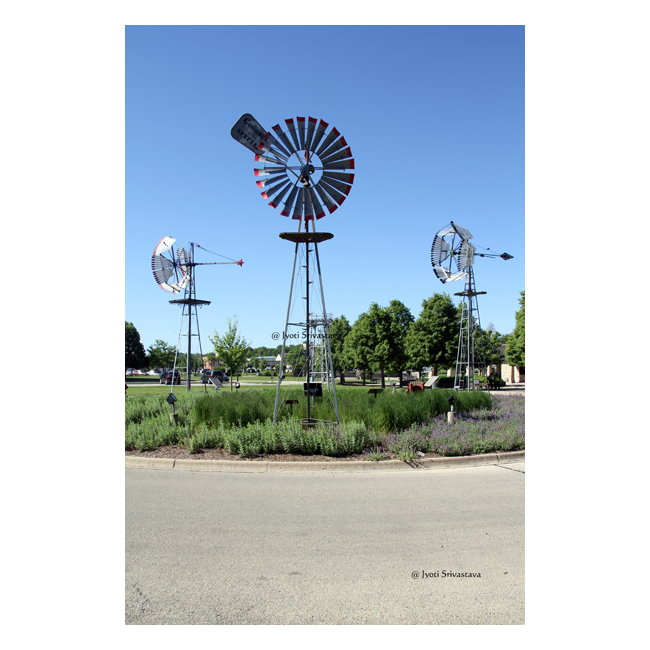 THE WINDMILL HERITAGE OF BATAVIA.

Batavia was once the “Windmill Capital of the World.”

Batavia’s urban landscape is dotted with windmills.  It is part of the town’s legacy.  Batavia was once called the “Windmill Capital of the world”  because of the number of windmill manufacturers in the city.  From the 1860s until the 1950s, Batavia, Illinois, was home to six companies manufacturing windmills. This greatly accelerated America’s ability to settle “the West.” The Second World War effectively ended an industry as a result of expanded availability of electricity.

Today,  about 18 restored  windmills are on display near the Government Center, public places and commercial sites. 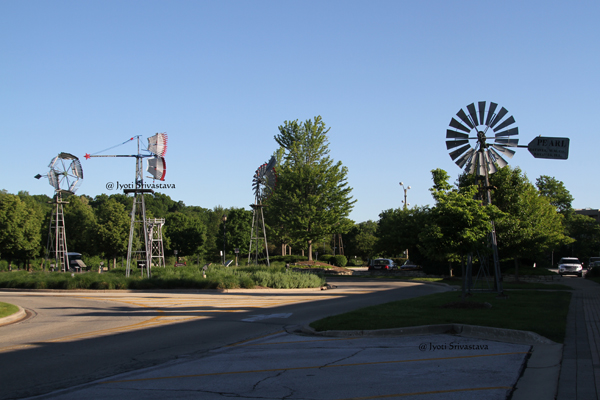 THE WINDMILL HERITAGE OF BATAVIA

A windmill is a mill that converts the energy of wind into rotational energy by means of vanes called sails or blades. Windmills were usually were used to mill grain, pump water, or both. Once widely used, they fell into disuse when electricity became common. However, in recent years,  they have made a comeback in the form of wind turbines, which used to generate electricity. But here we are talking about early windmills used for grinding and pumping water.

American Windmills different from European Windmills..
Early European immigrants brought windmill technology to America. These were used for grinding grain and pumping water. Although European style windmills served valuable roles, they required constant human attention and were expensive. Windmills that developed in America quite different in design and appearance. In 1854, Daniel Hallaway designed the first commercially successful new windmill in the New World. His windmill had a self-governing design. This means that it automatically turned to face changing wind directions and that it automatically controlled its own speed of operation. An excellent read.. click here..

Batavia’s Windmill Legacy..
Halladay invented his first successful self-governing windmill in Connecticut, U.S.A., and his company manufactured them there from 1854 to 1863. Delays in production and shipping, some caused by the American Civil War, prompted him to relocate the factory to Batavia, Illinois. In 1863, the U.S. Wind Engine and Pump Company moved its manufacturing plant to Batavia.  It was the first windmill factory to be established in Batavia.  Soon Challenge, Appleton and other companies were manufacturing windmills in Batavia. From the 1860s until the 1950s, Batavia, Illinois, was home to six companies manufacturing windmills. Batavia earned the nickname “Windmill City,” because of the number of windmill manufacturers in the city. Batavia manufacturers produced hundreds of windmills annually.  They provided employed hundreds of local workers,  who made a significant segment of the population of 3,800 at the industry’s peak in 1900. Batavia’s windmill industry provided essential resources for the growth of the American West and developing nations, and in turn, this benefited Batavia’s economy.

Why Batavia?
Batavia was a natural choice for windmills. There was abundant native limestone available for factory construction, waterpower from the Fox River [all factories were along the Fox River], there was easily available rail access, and abundance of skilled work force. Equally important was the huge market for windmills from the growing American west. Batavia was a central location to satisfy the increasing demand of the westward expansion. This relation was reciprocal. Windmills helped Westward Expansion, and in return created demand which helped windmill factories in Batavia to thrive and generate income and employment and boost the economy.

Windmills And America’s Westward Expansion..
Windmills were used for grind grain, pump water, chop wood, and could handle other similar tasks. They saved time, creating more time for farm-family to cultivate land, spend time with their livestock, or on education and socializing. The water-pumping windmill also made the widespread settling of the West possible. With it, farmers and ranchers were able to more easily irrigate gardens and water their livestock from wells, rather than rivers or lakes. In addition, large windmills of 14 feet or greater in diameter were used to draw water into the huge tower tanks and ponds that fed steam locomotive. The steam locomotives replaced the horse and wagon as the preferred method of quickly transporting people, supplies and messages across long distances. So windmills allowed train lines to spread across the nation, pumping water needed to fuel westward travel by steam. As Batavia Windmill enthusiast Bob Popeck put it.. “Many helped expand the railroad industry, in its role in building the western part of the United States, by supplying watering stations every 80 to 100 miles for the steam engines travelling across our great country.”

The end of an era..
But after the Second World War, the windmills industry died mostly due to expanded availability of electricity.

SIX WINDMILL MANUFACTURING COMPANIES
which operated in Batavia between 1860s to 1950s.

In 1994, a campaign “Bring them Home” was launched to bring back windmills manufactured in Batavia. Batavia resident Bob Popeck and his wife Francine McGuire-Popeck led an initiative to bring a lot of the locally made windmills back here to Batavia. Popcheck also worked in organizing two annual International Windmillers’ Trade Fair to Batavia, first in 1996 and again in 2012. It’s worth mentioning that Bob Popeck was awarded the Batavia Citizen of the Year Award by the Batavia Chamber of Commerce in 2007.

Today,  about 17 restored windmills are on display near the Government Center, public places and commercial sites. The history of each is profiled in detailed signage. Nine of seventeen windmills are in the Batavia Riverwalk along the Fox River.

Private donations from businesses, community groups, and individuals financed the acquisition, restoration and placement.  No tax dollars were used in the purchase of any of the windmills.  The city display’s only Batavia-made windmills. New commercial developments are encouraged to include windmill displays. The Batavia Depot Museum and Gustafson Research Center contain windmill memorabilia.

In 1913, the American Society of Mechanical Engineers [ASME] bestowed  the “Historic Mechanical Engineering Landmark ” status on Batavia in recognition of its current collection of early self-governing windmills.
Batavia Windmills (1863-1951).
Batavia, Illinois, U.S.A. – ASME Landmark #254, Designated on September 2013.
This collection of early mass-produced, self-governing windmills were designed for ease of assembly, operation, and maintenance by six manufacturing companies in the town of Batavia, Illinois from 1863 to 1951.Invented by Connecticut machinist David Halladay, the mechanical design of the wind engine system of gears and linkages made efficient use of centrifugal and gravitational forces in controlling the windmill blade’s resistance to airflow.

BATAVIA’s RESTORED WINDMILLS
There are 17 Batavia made windmills installed in the city.
9 of these 17 are in the Batavia Riverwalk along the Fox River. 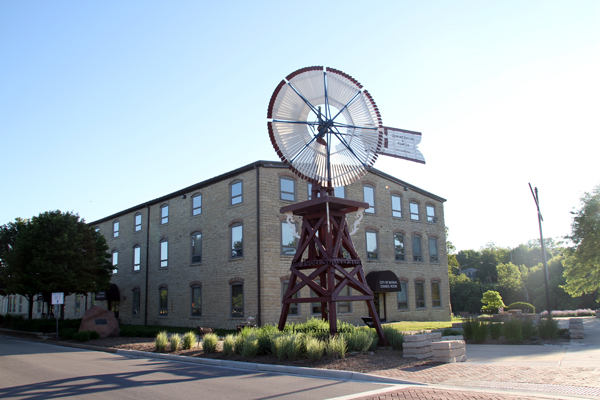 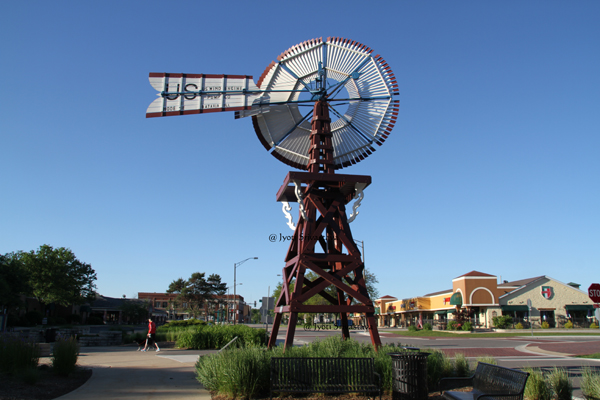 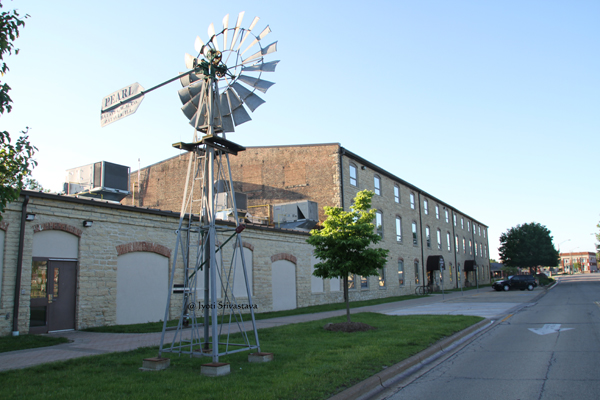 Batavia Mindmill Company operated from 1890s to 1900s. This small company manufactured six different mindmill models, Pearl Steel Windmill being one of them. 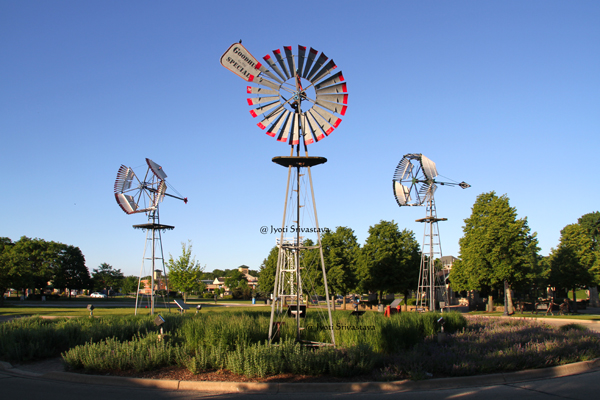 Six companies mass produced windmills in Batavia, Illinois between 1863 and 1951.

[3] Appleton Goodhue Specail Windmill
Circa 1902 – 1910.
Manufactured by Appleton Manufacturing Company.
Owned and Maintained by the City of Batavia.

The Windmill features Appleton-Goodhue colors that led to the marketing slogan – “the mill with good hues: red, white and blue.”

[4] US Halladay Standard Windmill
Circa 1860s – 1920s.
Manufactured by the U.S. Wind Engine & Pump Company.
Owned and Maintained by the City of Batavia.

The Halladay Standard holds an important place in the windmill history. Daniel Halladay invented and patented this self-governing windmill in 1854. It was the first commercially successful American windmill that could control its own speed of operation. It was once widely used throughout the Midwest and the Great Plains.

[5] Challenge Vaneless Model 1913 Windmill
Circa 1913.
Manufactured by the Challenge Company
Owned and Maintained by the City of Batavia.

Challenge Vaneless design first appeared in 1912 and continued throught the mid 1920s. It was widely used in Midwest and Great Plains. 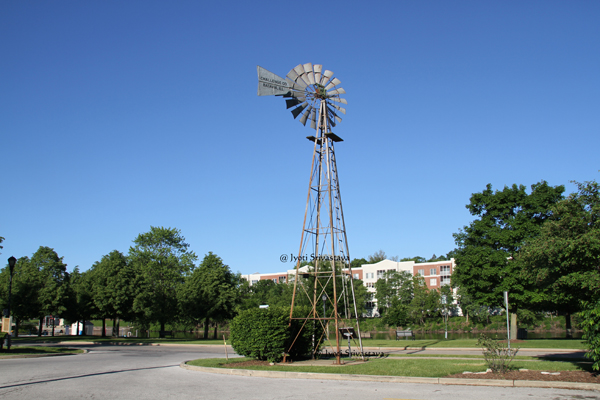 [6] Challenge Steel Windmill.
Circa 1906-1927.
Manufactured by the Challenge Company of Batavia, Illinois.
Donated by Batavia Township.
Owned and miantained by the City of Batavia. 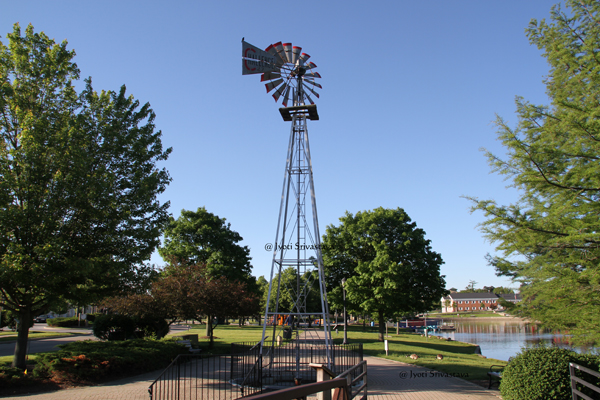 [7] Challenge 27 Windmill
Circa 1927 – 1940s.
Manufactured by The Challenge Company of Batavia, Illinois.
Donated by the family of Sarah K. “Sadie” Layland and the Windmill Herald.
Owned and Maintained by the City of Batavia.

In 1927, the Challenge Company introduced the Challenge 27, which proved to be the most successful American windmills of the 20th century. It was widely used throughout the US and overseas. Some are used even today. The Challenge 27 is currently the only windmill in Batavia that pumps water. 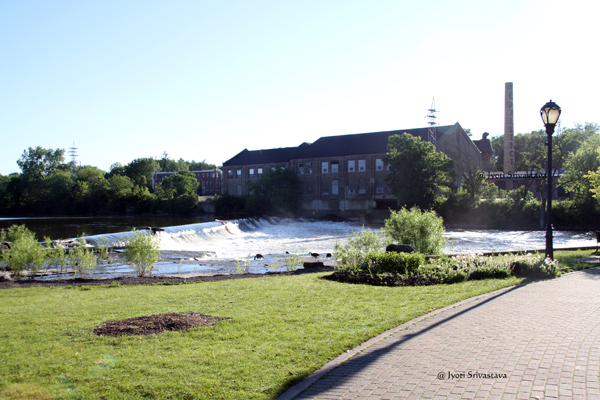 Walking along Batavia Riverwalk, I came across the Challenge Dam on Fox River. On the east of river bank are buildinga which once were the Challenge Wind Mill & Feed Mill Company building. All Challenge mills were manufactured in these factory buildings. It now serves as office buildings.  The factory Chimney still stands tall and proudly bears the “Challenge” name. In fact, the dam was named as Challenge Danm, because of its proximity to the Challenge Company. 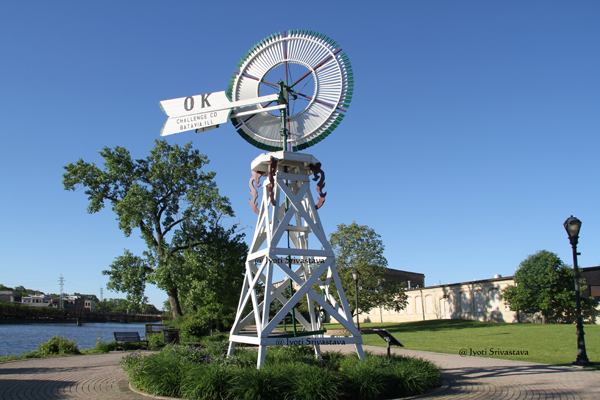 Challenge “OK” Model was introduced in the Challenge line of mills in 1885. The “OK” was the first solid wheel wooden mill produced by Challenge Company. 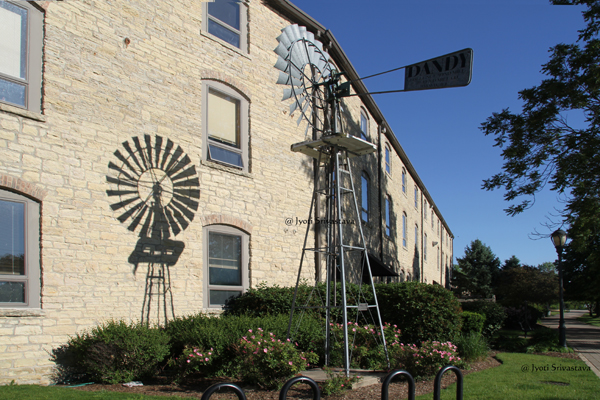 Challenge Dandy Windmill was introduced in 1891. It is the first steel windmill produced by the Challenge Company.

NOTE.. All the above nine windmills are all located in the along the Batavia Riverwalk and vicinity. It extends along the Depot Pond and Fox River to a north point pavilion,  Challenge Dam and what once was the Appleton factory building [now Municipal Center]. 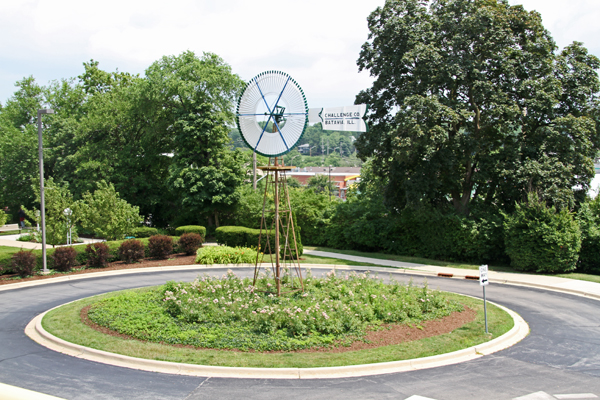 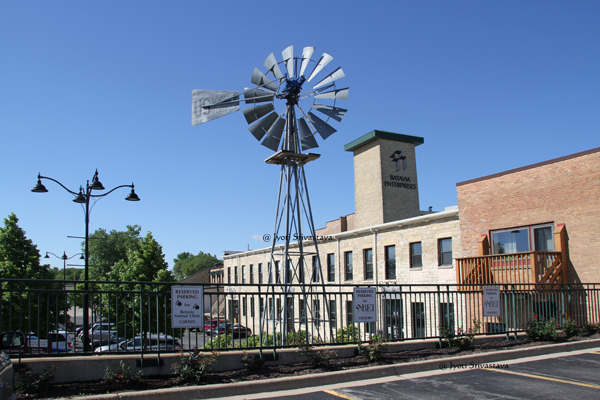 The building was once the site of U.S. Wind Engine & Pump Company.
It is now part of BEI properties. BEI is Batavia Enterprises, Inc., is a real estate company with customers throughout the Fox Valley. It has properties in Batavia, Geneva, St. Charles, West Chicago, and Elburn 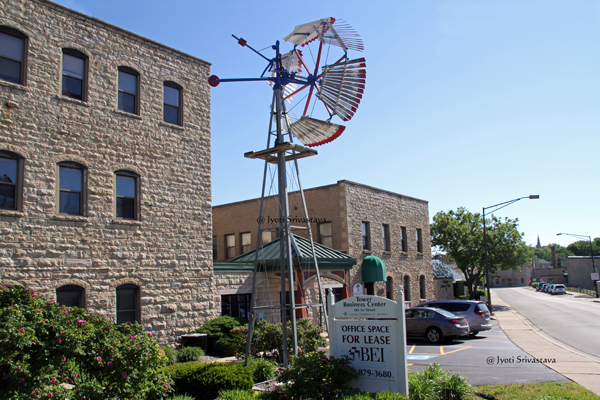 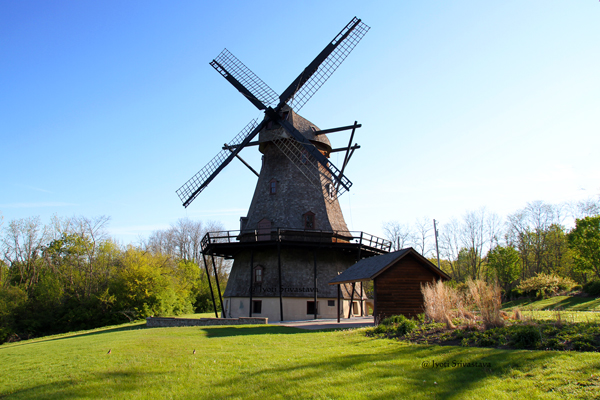 There is also a windmill in the nearby Fabyan Forest Preserve, Geneva, IL.
Circa 1875-1876
Built by Louis Bockhaus and Friedrich Brockmann.
Owned and Maintained by Kane County Forest Preserve District.

The Fabyan Windmill is the only European style windmill in the Batavia area. It is in the closeby town of Geneva, IL. It was built in 1875-76 by German craftsmen Louis Bockhaus and Friedrich Brockmann in York Center, Illinois, on the site of present day Lombard. Colonel George Fabayan purchased the windmill in 1915 for approx. $8,000.  A crew dismantled the windmill and moved it to Fabyan’s Riverbank Estate.  Here Danish millwright named Rasmussen saw its reconstruction. In 2005, the Kane County Forest Preserve District rededicated the windmill after being restored by Lucas Verbij, a Dutch millwright.