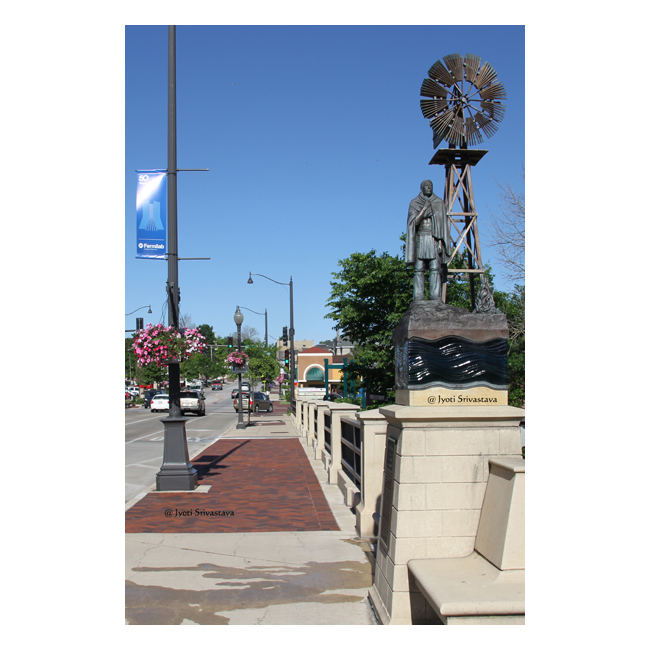 William J. Donovan bridge is the only bridge in Batavia over Fox River.  The current Wilson Street Bridge, or Donovan Bridge, is the 3rd generation of the bridge and was built between 2007 and 2008. The bridge it replaced stood since 1911, which replaced the original structure built in the mid-1800’s. As the only bridge in Batavia, the Donovan Bridge is an important piece in local architectural heritage. In 1911, its design was considered quite modern for its day, having even been featured on the cover of an Illinois Engineering Journal shortly after its construction. But over years, it was showing signs of distress. The new bridge was completed in 2007-08.  In 2008, there was official dedication of the new Wilson Street bridge.  It was renamed as the  William J. Donovan bridge after  Monsignor William J Donovan  [1885-1987], who served the Holy Cross Parish for about 36 years, from 1929 until his retirement in 1967.

During the planning phases of the project, the city of Batavia established several key objectives:  provide an aesthetically pleasing replacement structure; complement the history and civic pride of Batavia;  provide connections to the Fox River including stairs; add river observation outlooks;  include pedestrian paths below the bridge; enhance the area around the bridge including the river walks, bike path, and river viewing area;  enhance the downtown area as a focal point for furthering Batavia’s downtown development plans. 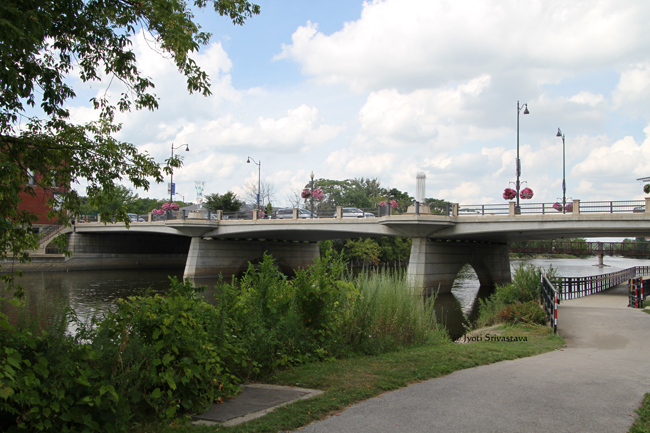 When the Donovan Street Bridge project was completed in 2007, the design included four piers, each with a location designated for four works of art corresponding to the categories of “Nature”, “History”, “Science” and “Art”.  Four sculptures with themes: Nature History, Science and Art are.. 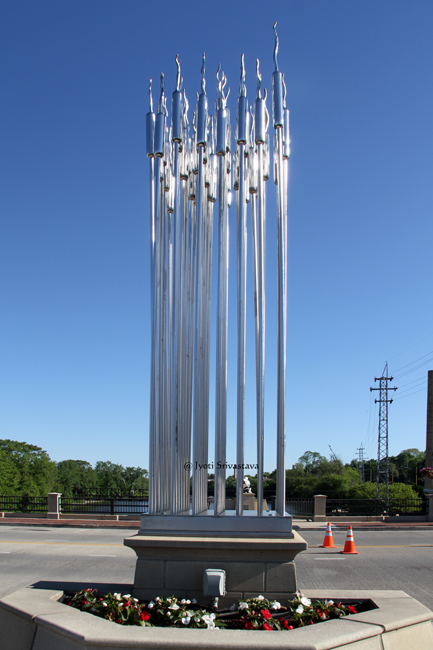 Nature’s Sound of Harmony was chosen as the “nature” component of the group of sculptures to grace the William J. Donovan Bridge.
It represents the value the community places upon the beautiful world around you. 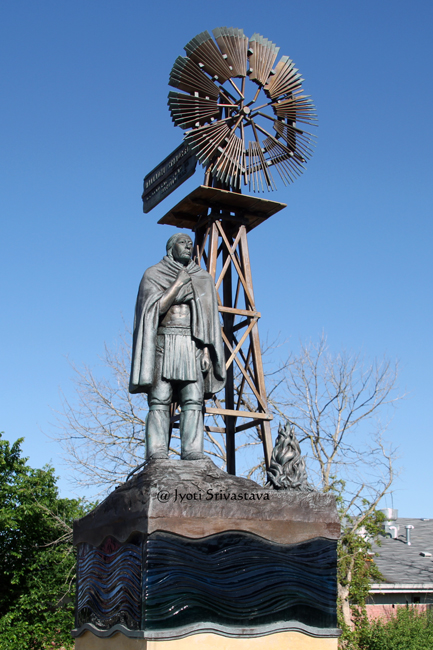 A Look Back – by Oscar Leon and Jessica LoPresti

A Look Back – by Oscar Leon and Jessica LoPresti

A Look Back was chosen as the History component of the sculpture to grace the William J. Donovan bridge.
It acknowledges that an accurate respectful view of Batavia’s past will aid the community in shaping it’s own future.

A Potawatomi mstands on the bank of the Fox River, with its underlying limestone. As a “keeper of the Fire”, caring for sacred campfire is an important responsibility. He faces east, from which comes life and new beginninbgs, unaware of the magnitude of changes coming to this region. Out of his sights rises a windmill, a symbol of Batavia’s move from an agrarian economy to one characterized by manufacturing and later, commerce heavily reliant on the use of computers and World Wide Web, which also had its beginnings here. 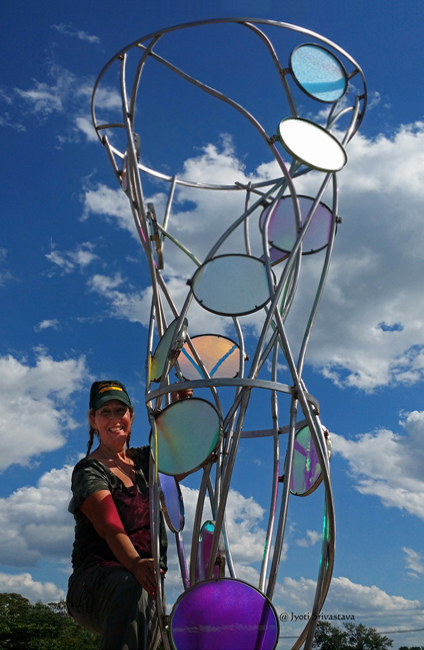 Spintronic was chosen as the Art component to the sculptures to grace the William J. Donovan Bridge
It acknowledge the importance of self expression in this case, the arts, to the community.

Self Expression is the basic human activity that embodies our individuality, and the energy behind it has led to man’s greatest achievements. Spintronic’s beauty is derived from dynamics that electrons can create when acting under the influence of electromagnetic forces. Yest the significance of the design may be in the enery and movement upward that reflects expansion, growth, and even joy. The colors created by shifts of lights through the unique glass are also symbolic of the vivesity and changes wityhin a community and its people. 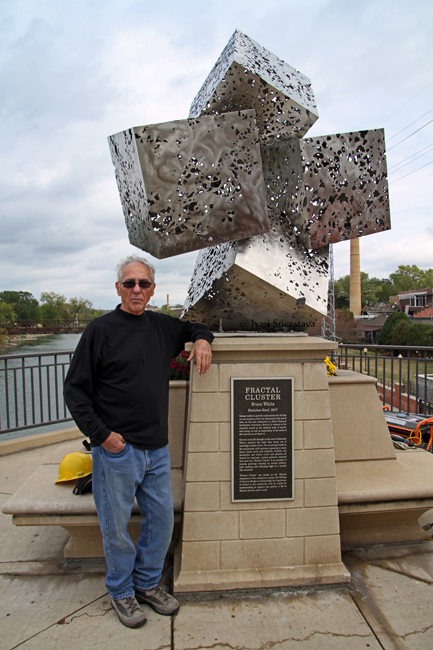 “Fractal Cluster” was chosen as the science component of the sculptures to grace the William J. Donovan Bridge.
It ackowneledges the importance of science to the community. with its search for understanding to improve the quality of life in batavia and the entire world.

Science works to provide explanations for all that we see around us, from the beginning to the end of time. As the host community to Fermi National Accelerator Laboratory, Batavia is witness to the scientific search at the smallest scale of matter and energy as well as exploration of the birth of the universe as we know it.

Current scientific thought in the area of Quantum Theory explores the order that arrives out of seemingly random chaos. The microscopic leads to the microscopic with patterns repeating in many forms, storm swirls and seashells, foothills and mountains, and stomic nuclei and galaxies all formed by seemingly random patterns over and over. “FRactal Cluster” is an example of random piercings creating an overall pattern, both catching and reflecting light in a crystal like structure.

For images of installation..click here.. 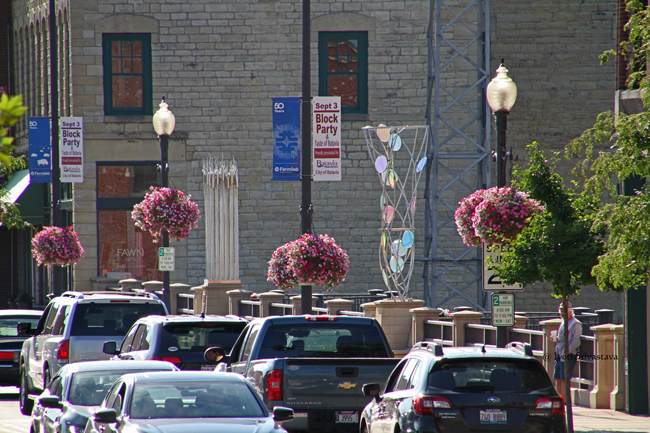