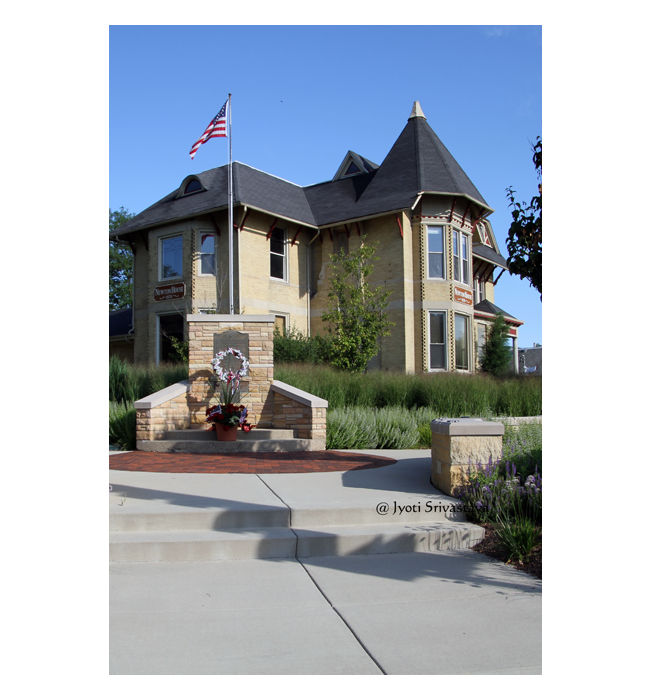 Built in 1878 by the owner of Newton Wagon Works, Don Carlos Newton.

The Newton House is one of the most historic places in Kane County. It is now being used as office space and retail space. But it was originally house of the Newton Family. They owned the Newton Wagon Company, which in the 1890s was one of the largest wagon factories in the United States.  The nearly 6600 foot square mansion still has a grand staircase, beautiful dark walnut trim, hand painted stained glass windows, and hand-carved fireplaces. 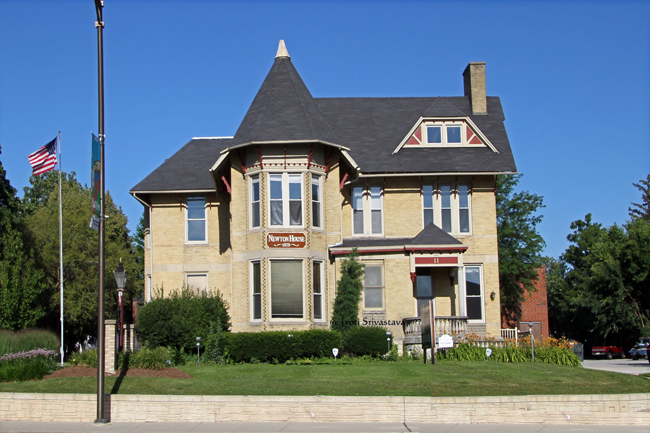 One of the most tireless businessmen of Batavia was Capt. Don Carlos Newton.  He was the son of Levi Newton who started the Newton Wagon Company in Alexander, New York in 1838.

Although the Newton Wagon Company was founded in New York, it flourished in Batavia. But not without obstacles.

Levi Newton [1810 – 1879] was a businessman in New York. In 1838, he purchased a small factory in New York producing wagons. These were largely shipped to Wisconsin and Illinois, especially to Kane County. In 1854, his factory was destroyed by fire making him almost bankrupt. At the time of the destruction of their factory, Don Carlos was not yet 22 years of age.

Since most of Newton business came from Illinois, Levi Newton visited Fox Valley, and decided to settle his family in Batavia in 1854.  He started a new factory in partnership with his eldest son Don Carlos.  By 1860 and the outbreak of the Civil War, the Newton shops employed 50 men and also included a foundry. But disaster hit again in 1872, when fire destroyed the shop and three stories office building. Since this happened a year after the Great Chicago Fire of 1871, the insurance companies could not pay their obligations. They had to bear the entire loss of $40,000 on their own.

But the firm rebuilt the plant, and better than before.

The first year they manufactured 72 farm wagons. The company was growing. In 1879, Levi Newton, the family patriarch and company founder passed away.  Don Carlos Newton succeeded him as president of the Newton Wagon Manufacturing Co.. Levi Newton had been President since the organization started, and then Capt. Don Carlos held this position up to the time of his death. Don Carlos was also President of the First National Bank of Batavia. The Newton Wagon company continued to grow under Don Carlos. By the early 1890s, the Newton Wagon Works was one of the largest wagon factories in the United States making between 4,000 to 5,000 wagons per year.  Newton wagons were sold all over the country, “well known from New York to California.”

Capt. Don Carlos Newton passed away in 1893. His four children did no survive him and control of the firm reverted to his widow.

The Newton family sold their business to the Emerson-Brantingham Company [of Rockford, IL] in August of 1912. It also purchased the Pontiac Buggy Company at the same time. By the 1920s, Emerson-Brantingham had added automobile bodies and fenders to the products built by the former Newton Wagon Works.

Emerson-Brantingham ran into difficulties and was purchased by J.I. Case of Racine, Wisconsin in November of 1928.  As J.I.Case was only interested in the farm implement portion of the Emerson-Brantingham firm, they sold the former Newton Wagon plant to some local Batavia residents and former Newton Wagon Co. stockholders in 1931. Fox Valley residents who were stockholders arranged for the separation of the local company from Emerson-Brantingham/J.I. Case in 1931.  Established as an individual entity, the company was given the name Batavia Body Company in 1931, which made refrigerated truck bodies. Batavia Body Company ceased operations on June 29, 1973.

These buildings were torn down in 1978 to make way for two strip malls along North Island Avenue.

The Newton family has other important contributions in Batavia.
Construction of United Methodist Church of Batavia.
Newton War Memorial in Batavia West Side Cemetery.
Newton House served as Batavia Public Library Library Hall from 1921 to 1981.

Here is the Interconnected stories of a House, a Church and a Memorial… And also a Library.

Cpt. Don Carlos Newton, along with Reverend E. H. Gammon donated large sums of money to erect the new United Methodist Church of Batavia, which was completed in 1887.  Rev. Elijah Gammon was Don Carlos Newton’s brother-in-law. The church is located just across the street from the Newton House. It is built in Romanesque revival style, which was also a choice of Carlos Newton. He had recently visited southern France and was intrigued by the local French Romanesque Revival style. He recommended this style to prominent local architect Solon Spencer Beman, who was commissioned to design the building. The exterior of the building was primarily constructed with local boulders, mostly from I. S. Stephens’ Mill Creek Farm. Limestone details were carefully crafted to provide contrast to the more erratic pattern of the boulders. 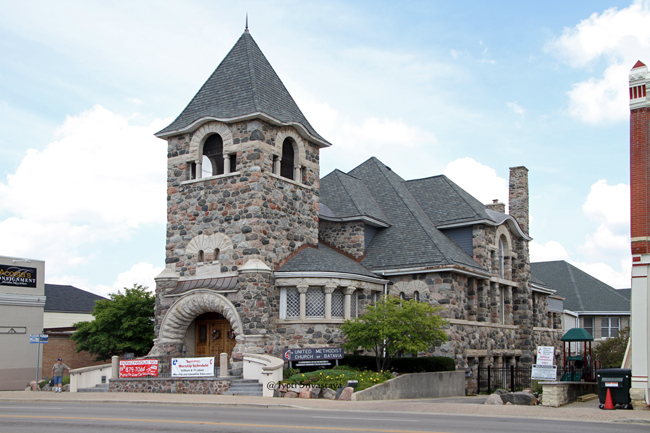 Newton War Memorial in Batavia West Side Cemetery.
The gift of the late Captain and Mrs. Don Carlos Newton

Don Carlos Newton died in 1893.  In his will, he had made  provision for the erection of that monument in honor of all the men from Batavia Township who served during the Civil War

This Civil War Memorial was erected in 1918. This monument erected in honor and in commemoration of the loyal patriotic men who enlisted from the township of Batavia Illinois in the War for the Preservation of the Union 1861-1865. The monument has plaques on the other three sides listing the men and their units who had enlisted.

In the Civil War of 1861-65, nearly 600,000 people lost their lives. Among them were 32 Batavians. The census of 1860 shows the population of Batavia was 1,621, and yet, throughout the war, Batavia provided 309 soldiers for the Union Army. There was no major battle in the war which did not have at least one Batavia. 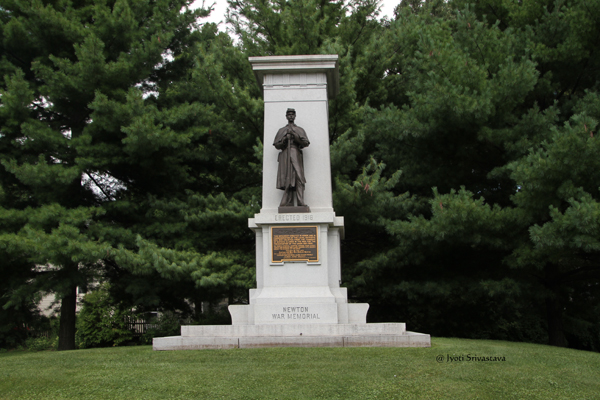 The Newton House served as Batavia Public Library from 1921 to 1981.

Batavia Public Library is one of the oldest public libraries in the Fox Valley. It traces its beginnings to 1868 as a library association. It has moved to various locations befor moving to the current building. The library’s fifth location was Newton House, which served as Batavia Public Library Hall from 1921 to 1981. In 1981, library moved to its sixth location, at the corner of Lincoln Avenue and Wilson Street, that is the Batavia Public School from 1981-2002. The Library moved to its current location in 2002. 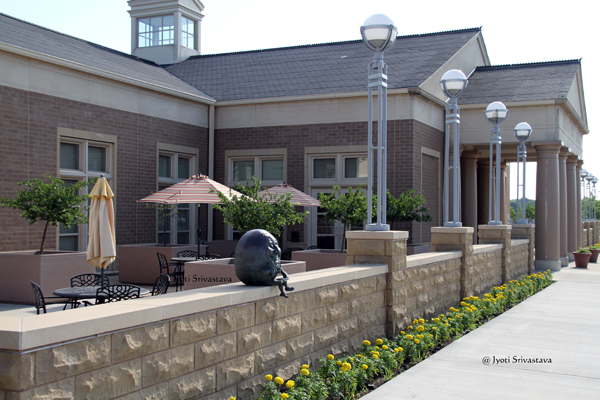 The Gammon Coach House is named after Elijah H. Gammon – a minister, industrialist and philanthropist of Batavia. His first wife, Sarah, died in 1855. He then married Jane C. Colton, a widow who had moved to Batavia with an infant son, Norman. Jane Colton’s sister was Mary Newton, wife of Don Carlos Newton of Batavia’s Newton Wagon Company. So Elijah Gammon was the brother-in-law of Don Carlos Newton. Cpt. Don Carlos Newton, along with Reverend Gammon donated large sums of money to erect the United Methodist Church of Batavia, completed in 1887. 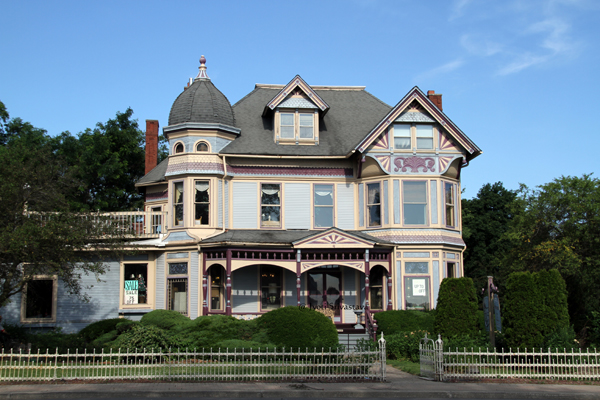 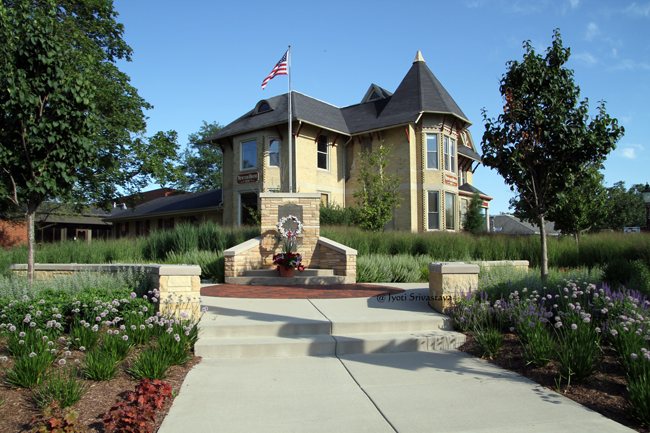 LEVI NEWTON HOUSE: The Levi Newton House was the Library’s home from 1902–1921. This house was the Library’s fourth location (from 1902–1921) and the first building actually owned by the Library. Mary M. Newton, following the wishes and plans of her husband, the late Captain Don Carlos Newton, presented the property, the red brick Levi Newton homestead, to the Board of Library Trustees. The librarian, Margaret R. Twining, welcomed the community to the “beautiful Library home” with the words, “So come, friends, one and all, and we will do the very best we can for you.” In November 1921, the Library moved to the D. C. Newton house next door, so that the City of Batavia could extend Wilson Street, which ended at the Levi Newton house on Batavia Avenue.

Don Carlos Newton during Civil War [1961-1865].. source.. click here..
At the breaking out of the great rebellion, Capt. Newton laid aside his business affairs, helped to organize the 52 Regiment, Illinois Infantry, and gave unhesitatingly, his best energies to the cause of the Union. He was elected Lieutenant of Company D, 52 Regiment Illinois Infantry. In December of the same year he was promoted to Captain of his Company. He was actively engaged in the service during his three year term, and was mustered out at Savannah, Ga., in 1864, having participated in the battles commencing at Fort Donelson, Shiloh, siege and battle of Corinth, Luka, the marches and battles from Chattanooga to Atlanta, and the Grand March with Sherman to the Sea. At the close of the war he returned to Batavia and resumed his business interests, which he continued up to the time of his death. 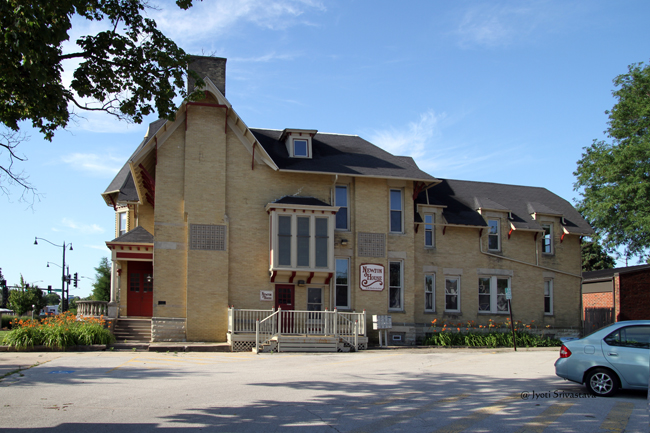