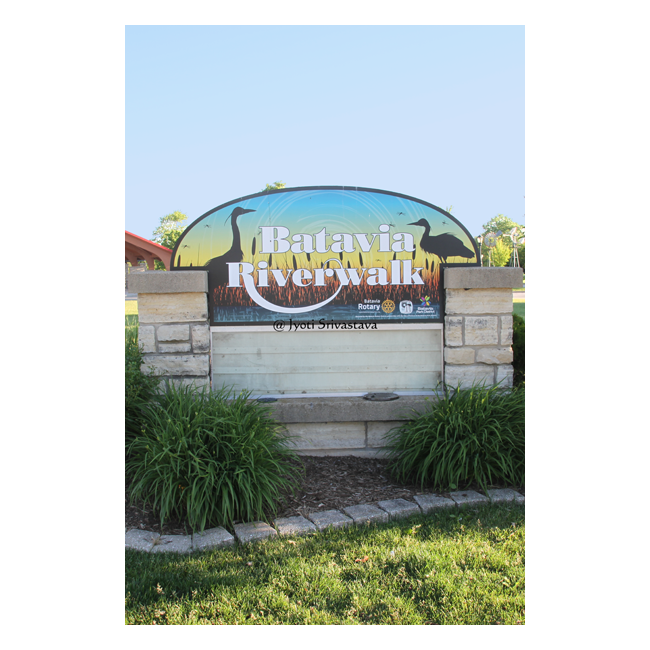 I like places that are visually appealing in first impressions, but as one digs deeper, there are layers of history and cultural heritage to be peeled and uncovered. Batavia Riverwalk is one such place! The Riverwalk is a beautifully landscaped gateawy. But it has is so much more to offer.  The rich history of Batavia – once the windmill capital of the world –  is inextricably woven into the Riverwalk.  Batavia’s railroad history comes alive in through the Depot Museum. Then The walkway takes one through the native plant habitat and the wildlife sanctuary, carefully built along the west bank of Fox River.  And this quiet getaway is just two blocks away from downtown Batavia. 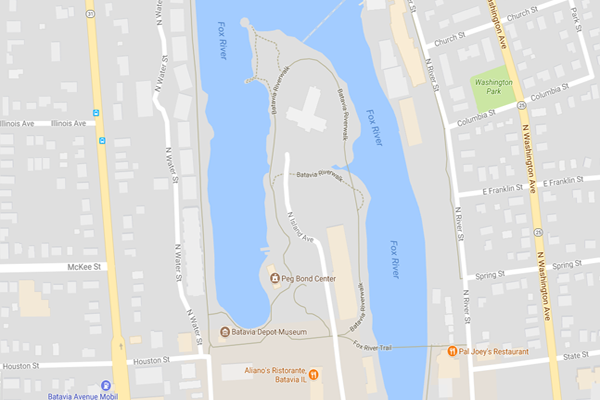 Batavia Riverwalk was born in 1991. It started with removing the non-native invasive species of plants and trees along the Fox River and replacing them with native species. In 1994, a in “Bring ‘em home” campaign was launched to bring the windmills back to Batavia. Many have been placed along the Riverwalk. In 2011, the multi-use Peg Bond Center was added. Below are some highlights of Batavia Riverwalk.

NATIVE PLANT HABITAT and WILDLIFE SACTUARY
The entire area around the Riverwalk peninsula is a Native Plant Habitat. All the plants are native to the Kane county. The area is comprised of five different micro-habitat: A Paririe, a Woodland, a Rock Shelf, a Savannah, and a Flood Plain.  There are birdhouses all along the Riverwalk. The protection and restoration of wildlife improves the enviornment. One of the objectives is to increase the public awareness of the benefits of this restoration of the naturay history.

BATAVIA  HERITAGE – WINDMILLS
Batavia was once the “Windmill Capital of the World” because of the number of windmill manufacturers in the city. From the 1860s until the 1950s, Batavia, Illinois, was home to six companies manufacturing windmills that greatly accelerated America’s ability to settle “the West.” The Second World War effectively ended an industry as a result of expanded availability of electricity. Today, about 18 restored  windmills are on display near the Government Center, public places and commercial sites. The Batavia Riverwalk has 9 of the 18 windmills. For more.. click here..

ART and ARCHITECTURE
There are some interesting buildings along the Riverwalk: Batavia Depot Museum, The Cityhall and the Peg Bond Center.
Batavia Depot Museum was once the town’s Chicago, Burlington, and Quincy Railroad Depot. It was the first of many depots built by the company. It was listed on the National Register of Historic Places in 1979. The current Batavia Cityhall is in the original Appleton Compnay, which was started in 1872 [Rebuilt in 1900, after fire damaged the building]. The Peg Bond Center is a multipurpose building, sued for wedding receptions, company gatherings and birthday parties.
There are sculptures like: “Batavia Protector” by Roger Brodin, “Circle of Peace” by Gary Price, and “Give It A Twirl” by Kai Schulte.
There is also a beautiful water-fountain.

FOX RIVER and CHALLENGE DAM
For me, one of the main attractions on the Riverwalk was the Challenge Dam. 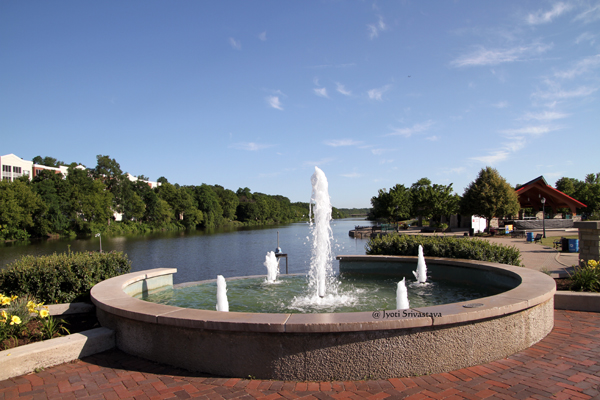 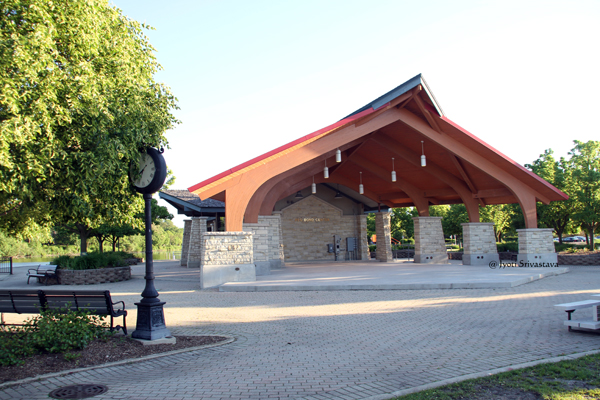 Dedicated in summer 2011, Peg Bond Center is a multi use space.  Located along the Riverwalk, it can be used for wedding receptions, company gatherings, or birthday parties, apart from being a venue of performing arts. 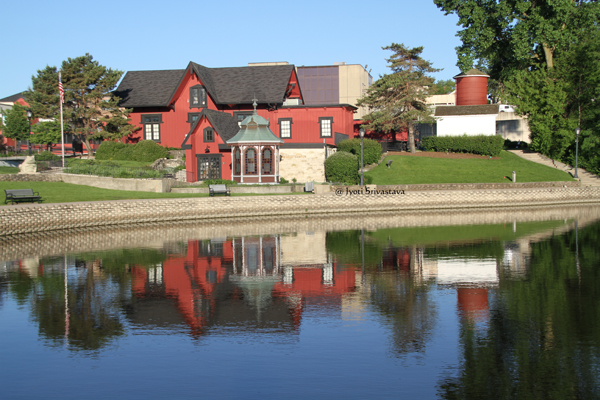 The Museum Depot was once the town’s Chicago, Burlington, and Quincy Railroad Depot. It was the first of many depots built by the company. 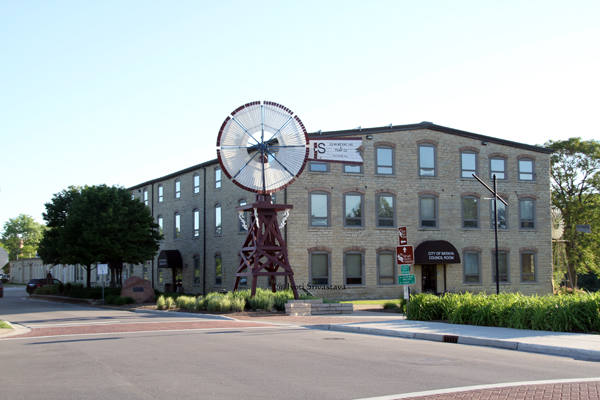 The current Batavia City Hall is at the original Appleton Company site. The company was started in 1872, and was the third major windmill maker in Batavia. It was rebuit in 1901, after fire destroyed the original in 1900. The restored facility now houses Batavia city officesand is a feature in the redevelopment of the riverfront and downtown. 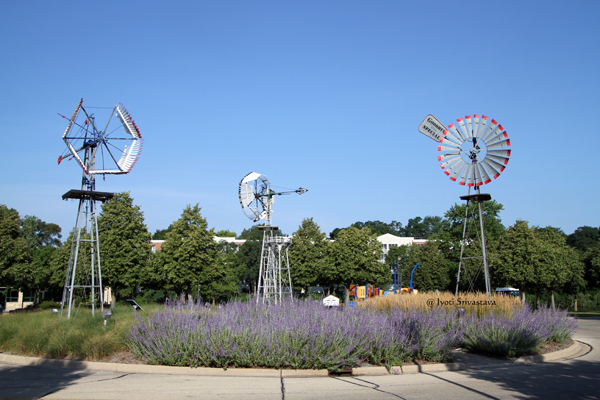 As mentioned earlier, Batavia Riverwalk is a short pathway on a small peninsula, on the west side of the Fox River. In the middle of the peninsula, there is Windmill Court, with windmills manufactured by some prominent companies in Batavia: U.S. Wind Engine and Pump Company, Challenge Company, Appleton Manufacturing Company, and Batavia Wind Mill and Aermotor Company. These windmills were designed for easy assemble, operation, and maintenance using only simple hand tools, primarily used to pump water or remote farms throughout most of North America. Windmills also filled railroad water tower, powered feed and saw mills, and drove other agricultural machines. 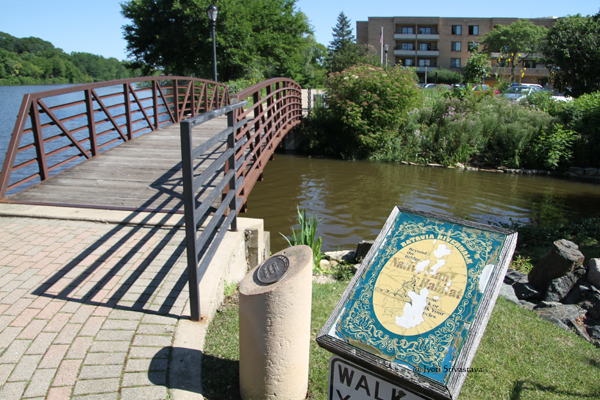 At one time, in recent history, this area was degraded with very few native trees. There were invasive species like Buckthorn, Honeysuckle, Garlic Mustard and other species.

It all changed when in 1991, Batavia Riverwalk was born. A Native Plant Habitat was carefully created. Batavia Plain Dirt Gardeners came up with a project to create wildflower sactuary. With the help of volunterrs of all ages and abilities, the degraded has been transformed.

On this relatively small area of the peninsula, the project has revealed five distinct plant habitats:
Woodland, Prairie, Rock Shelf, Floodplain, and Savannah!
These attract native birds and the wildlife. 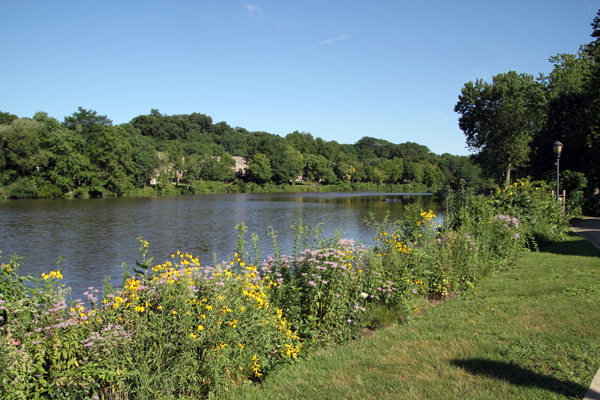 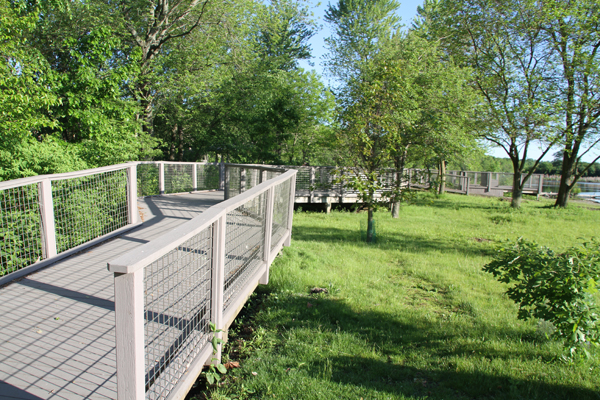 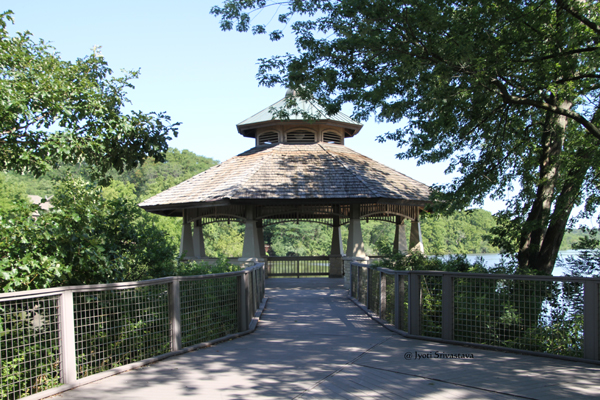 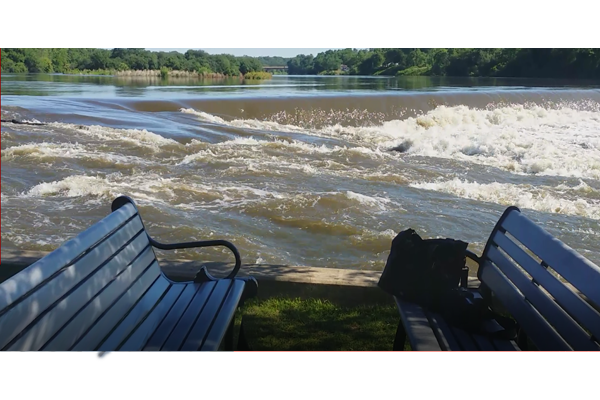 For me the highlight of Batavia Riverwalk is this Challenge Dam. The two benches offer the most spectacular view of Fox River. See the small video below to get an idea. There is nothing like sitting there and enjoying the view. A quite getaway from the humdrums of city life.

The Challenge Dam is so named because of the Challenge Factory across from the River. The original dam built on this spot was in 1835. It was built of logs and rock-filled cribs. For over half century the dam provided water power to run many factories in downtown Batavia. Sometimes between 1900 and 1910 a concrete dam was built to replace the original. Becuase of its proximity to Challenge Windmill Company, it came to be known as Challenge Dam. Unfortuneately the dam is severely damaged and crumbling.

The city is considering plans to repair or replace the dam. 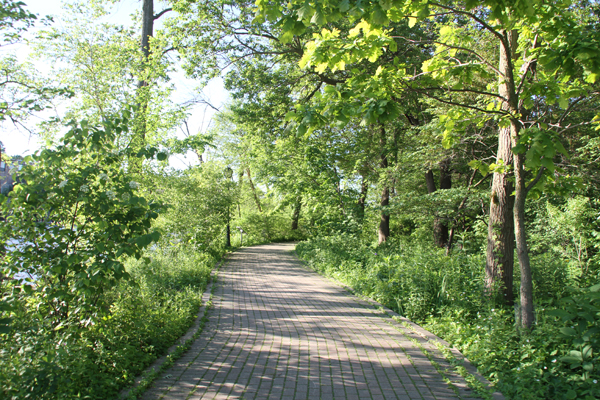 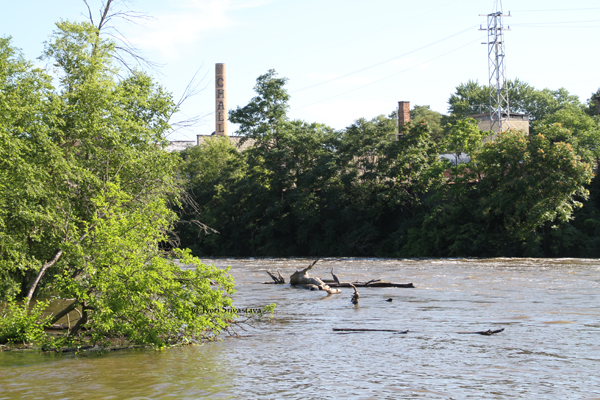 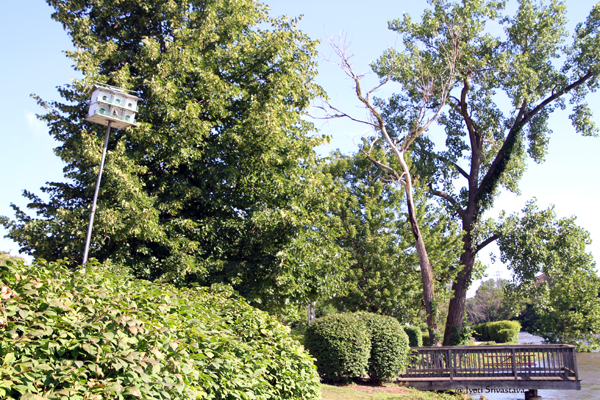 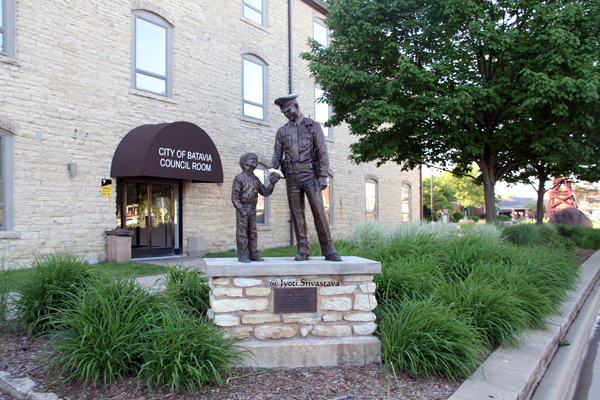 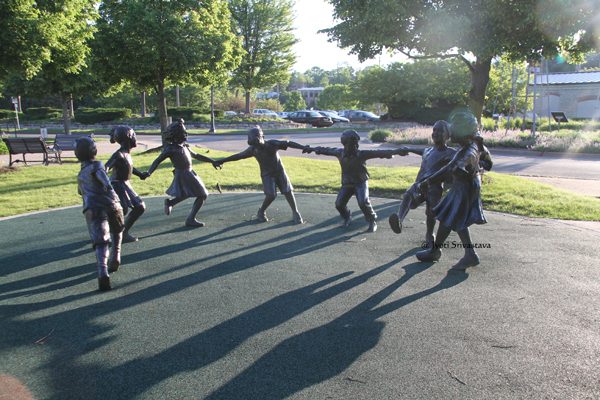 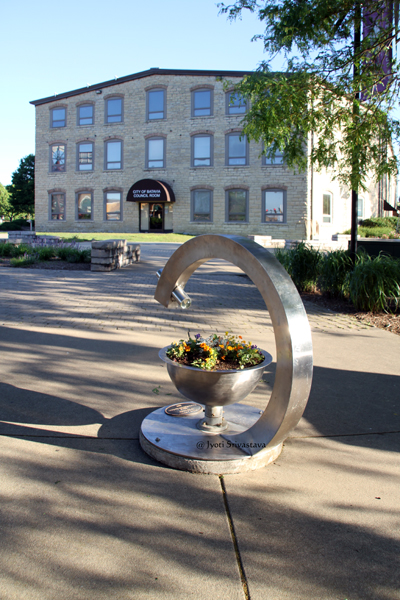 Give It A Twirl – by Kai Schulte / Batavia Riverwalk 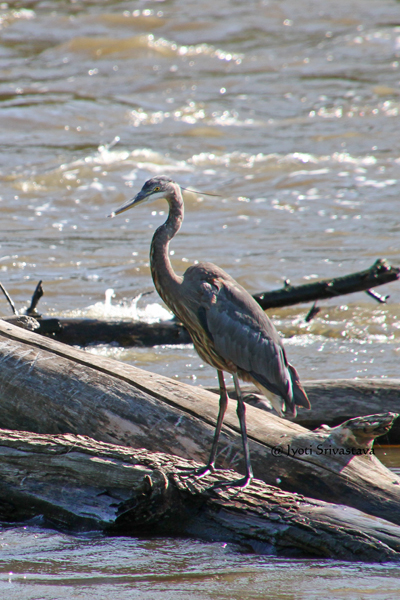 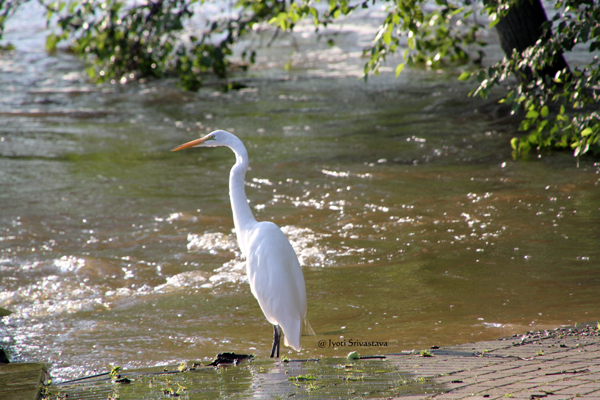 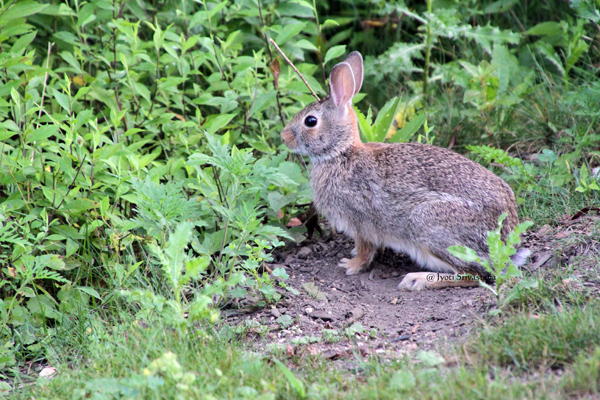 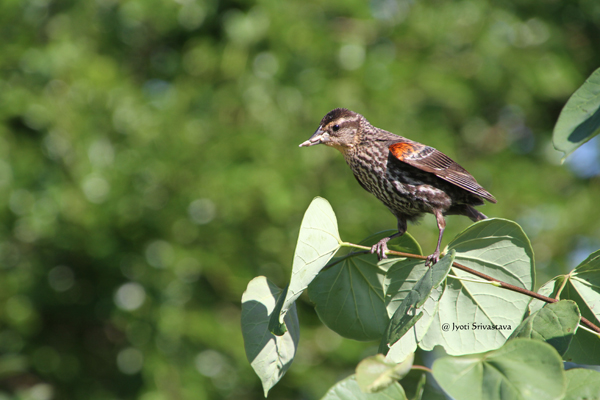 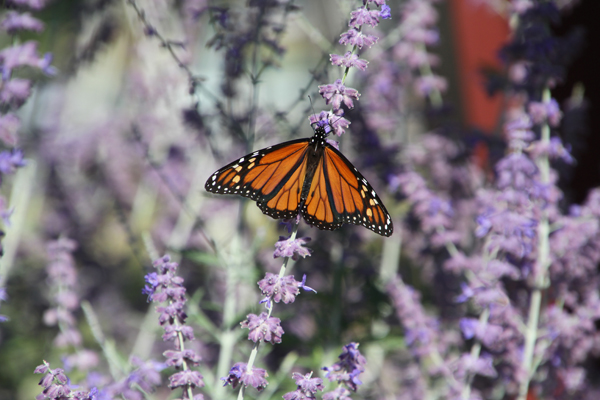 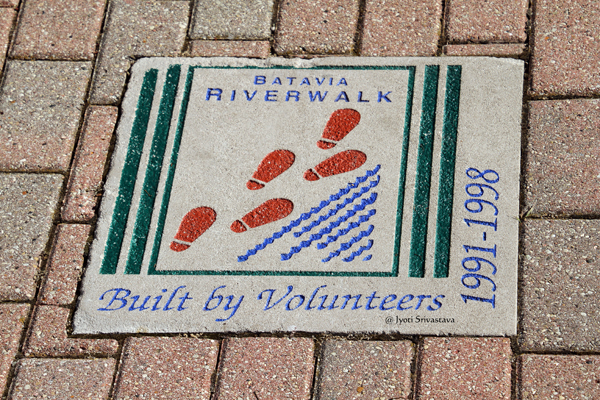 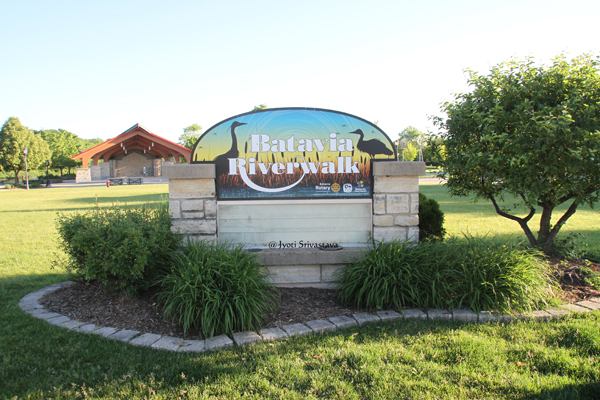