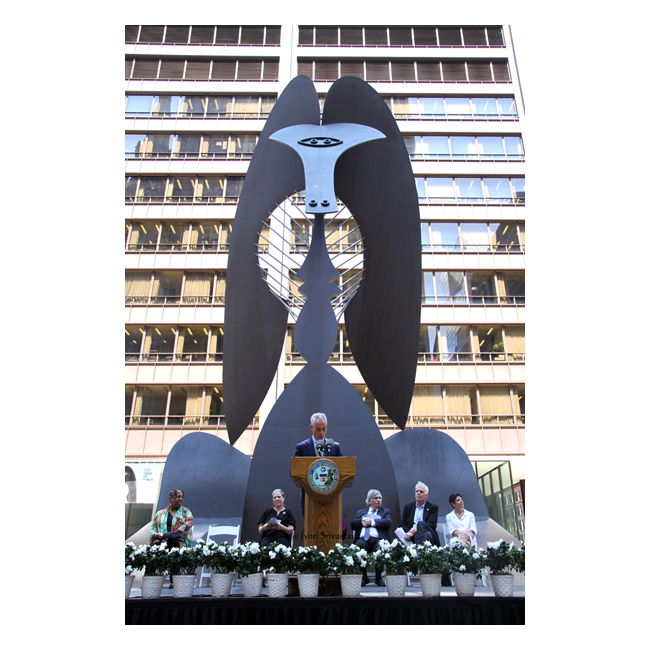 A restaging of the 1967 Chicago Picasso dedication

From being hugely controversial, to becoming  symbol of the city, Chicago’s Picasso has had a remarkable 50 years jouney. What is it, is still open to interpretation. Head of a woman? An Afghan hound? A horse? A bird?.. Since Picasso did not specify, everyone gets their own say. It ignites our imagination, and that’s the beauty of it! It’s monumental size, it’s contrast of graceful curves and sharp lines, it’s everchanging appearance as we slowly move around it, and it’s rusty-yet-sturdy appearance; all contribute to it’s iconic status. It’s location in Chicago’s civic center, also higlights that art in public spaces can be contentious, delightful, amusing and amazing at the same time.

Its installation had a profound influence on Public Art in Chicago. It has been a catalyst in bringing nationally and internationally renowned sculptors to Chicago. It also provived impetus and garnered public support for abstract, monumental, and non-commemorative sculptures in outdoor settings. It is said to grandfather of Public Art policies in Chicago.

Chicago’s Picasso is now 50 years old. Considering its huge influenec, the city decided to restaged its dedication in a public event, free and open to all.

This post is about the rededication event and whatever the speakers wanted to say about it. 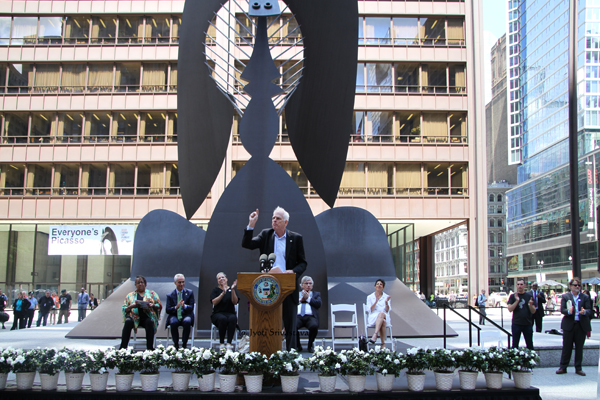 The first speaker at the event was Commissioner Mark Kelly [DCASE]. He highlighted the central place that Public Art has in the cultural fabric of the city of Chicago.

This prairie town on the Lake also engenders a deep creative urge. Chicago gave birth to the skyscrapers, the poetry slam, improv and storefront theater.  The music of the world is been shaped by Chicago’s Black music tradition of jazz, gosple, blues and house. We embrace our lakeshore like no other city on the globe and now our [Chicago] River has become our second waterfront. The play between our majestic skyline and urban speawl is enthralling.  And Chicago has a world class Public Art collction that shapes our enviornment and engages us in a public dialogue.
– Commissioner Mark Kelly, DCASE.

Commissioner Kelly also pointed out that Mayor Rahm Emaneul and the DCASE have designated 2017 as the “Year of Public Art” [YOPA]. There is a new 50 x 50 Nieghborhood Arts Project, new Public Art Festival, exhibitions, performances, tours and more – representing a 1.5 miillion investment in artist-led community projects. 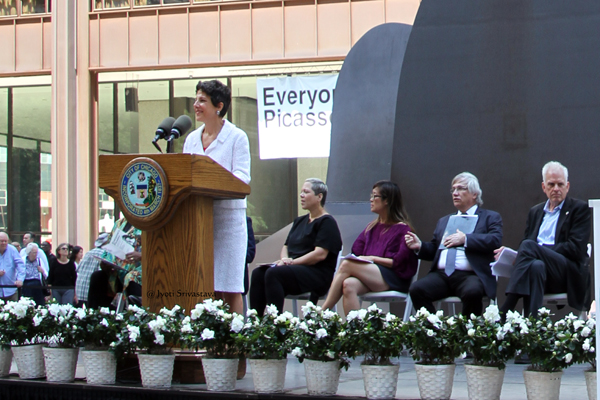 Jacqueline Terrassa [Chair of Leaning and Public Engagement, at AIC] took us back 50 years when the decision to install the abstract monumental piece by Pablo Picasso was made.  In those days, this sculpture was nothing like the commemorative monuments that Chicagoans had known as Public Art.  Mayor Richard J. Daley took a leap of faith, “With a belief that what is strange for us today, will be familiar tomorrow.”

In the words of Jacqueline Terrassa.”The best Public Art stops us on our tracks and asks us to be more open. It reminds us of our capacity to see the possibility that don’t yet exist.” Her very interesting presentation took us back to the decision making process from the point of view of th ree key players instrumental in this instrallation:  the then Chicago Mayor William J. Daley, civic leader William Hartmann, and the world’s most famous sculptor Pablo Picasso. In the process she highlighted the important of civic center and public art. “… artwork provide focal point for the community. They remind us that art is not an enhancement, it is a necessity. Art asks us to take a leap of faith. Whether as makers, or as viewers, art asks us exercise our imagination and open our sense of possibilities.” 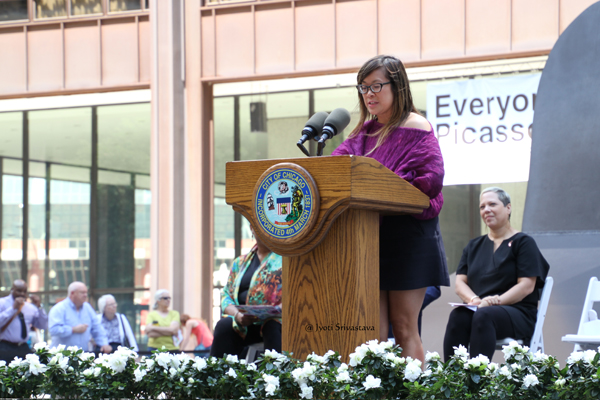 “Chicago’s Public Art looks into your eyes and dares you to flinch. Chicago’s art history brilliantly diverse is the people’s history of art world that insists that you see art in startling new ways, to question the status quo, challenge the authority and speak truth to power.”
– Lisa Yun Lee, Executive Director, National Public Housing Museum. 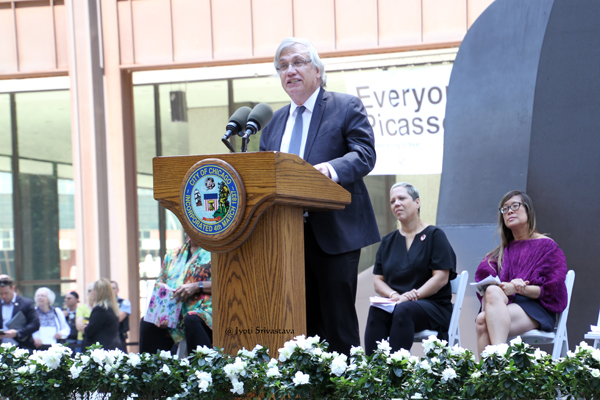 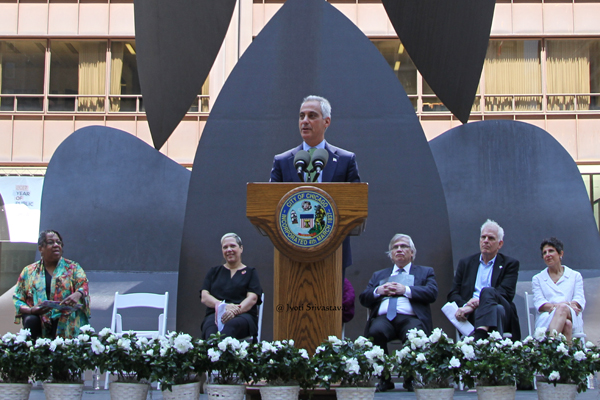 They call this “Everyone’s Picasso,” because it belongs to all of us. Chicago’s Public Art is a reminder of our shared history of the Great Migration, of the Haymarket Riot, of the city that rose again from the ashes of the Great Chicago Fire. Picasso’s gift to the people of Chicago inspired so many artists to follow his footsteps. Standing right here you can see a Dubuffet, and a Miro. We can look across the city and see Chagall’s mosaic, to Calder’s “Flamingo”, to Anish Kapoor’s “Cloud Gate”, to Magdalena’s “Agora”, to art in our CTA stations, our neighborhood parks, our libraries and along Lakeshore Drive. They are not just Chicago’s legacy of the past, they are prologue of Chicago’s future.

All across the city there are talented artists: actors, sculptors, painters, musicians, dancers and poets, who are writing a new chapter in Chicago story. In Chicago today we have the next Picasso. The next artist who would challenge us to think differently, to be bolder, and to challenge the way we look at the world. Picasso once said that every child is an artist. The problem is how to remain an artist once he or she grows up. This piece helps us all remain artists. It helps us to light and amaze the child in all of us. That is what makes Chiacgo’s Picasso a Chicago icon.
– Mayor Rahm Emanuel, City of Chicago.

It is everyone’s Picasso because it belongs to all of us in Chicago, and we share it with the world. It is a gift that we are proud to share with the world. 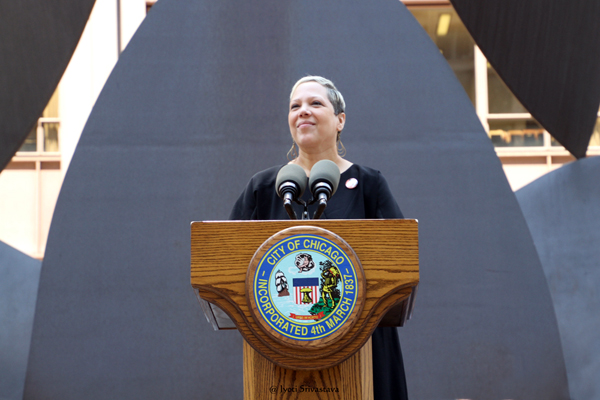 The event was a restaging of the 1967 Chicago Picasso dedication. Central to that was the unveiling. 50 years later, this is a much talked about, much photographed sculpture. In fact, now it is a symbol of Chicago. So a novel method to unveil was worked out by artist Edra Soto. Everyone was given a fan. They placed it in front of the eyes, and imagined a time when this sculpture was not there, and then see it. 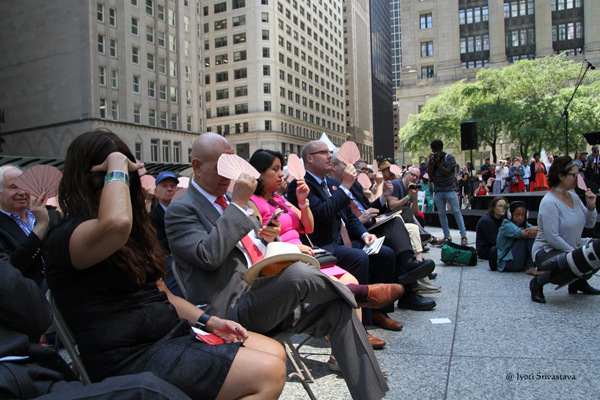 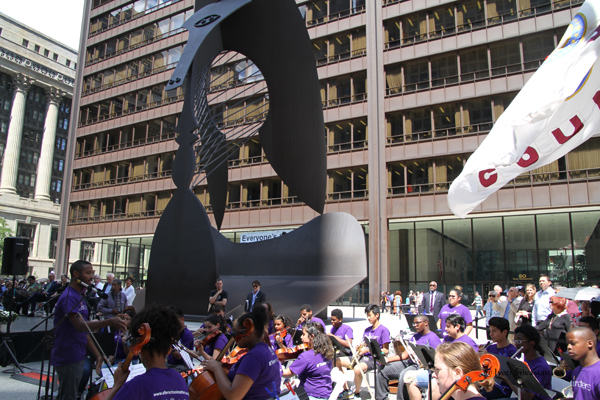 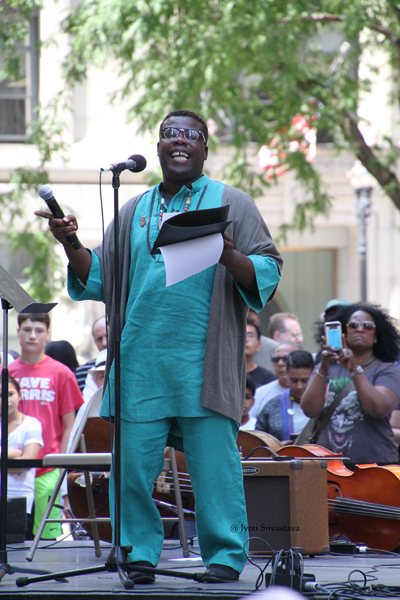 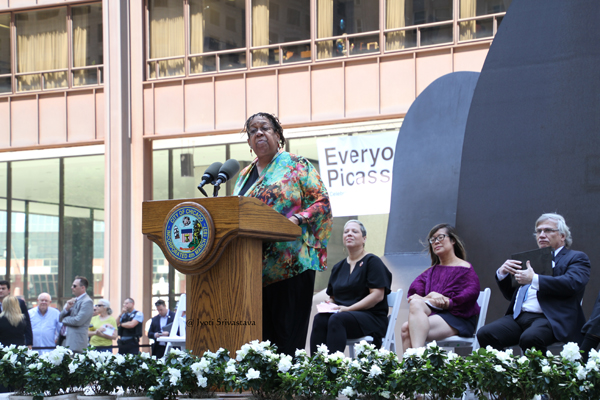 One of the highlights was poem recital by Nora Brooks Blakely, the daughter of former Illinois poet laureate Gwendolyn Brooks. She recited the same poem that her mother’s used in dedicate the sculpture 50 years ago. ” Does a man love Art? Man visits Art, but squirms.” 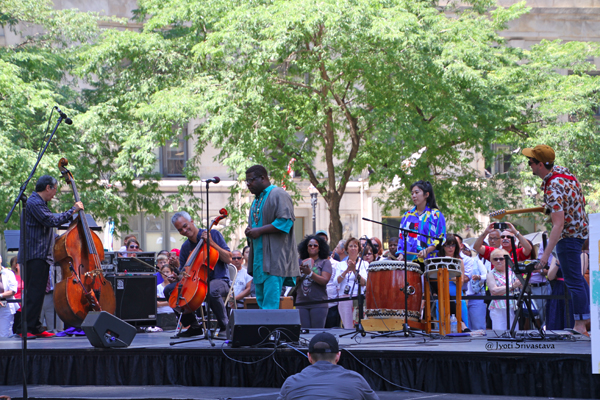 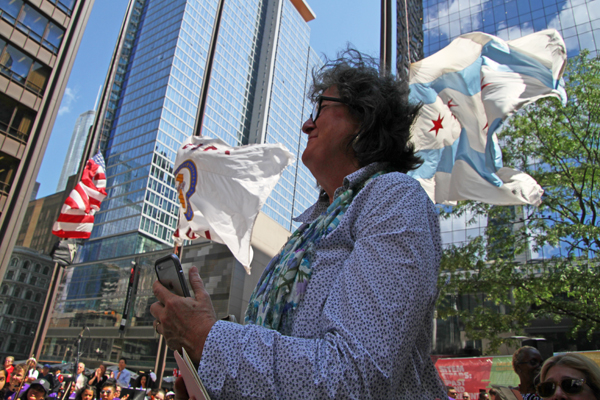 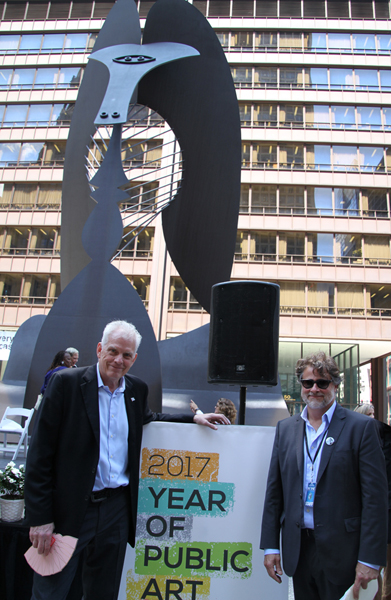 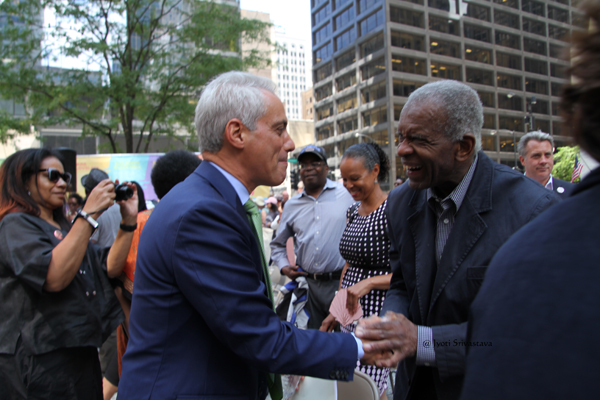 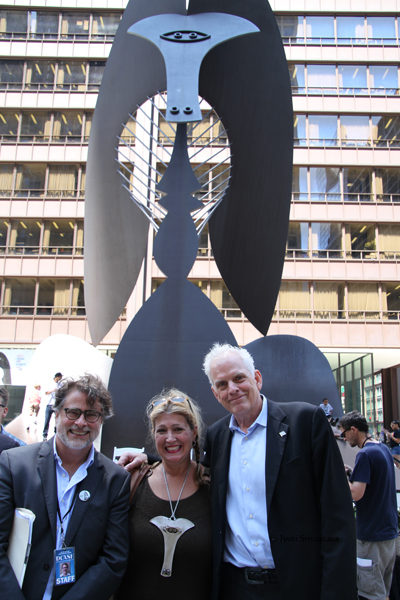 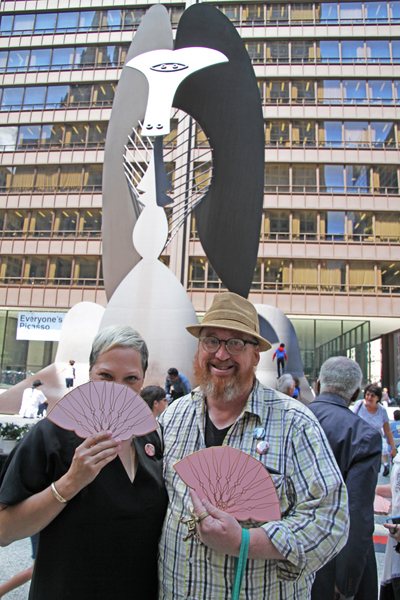 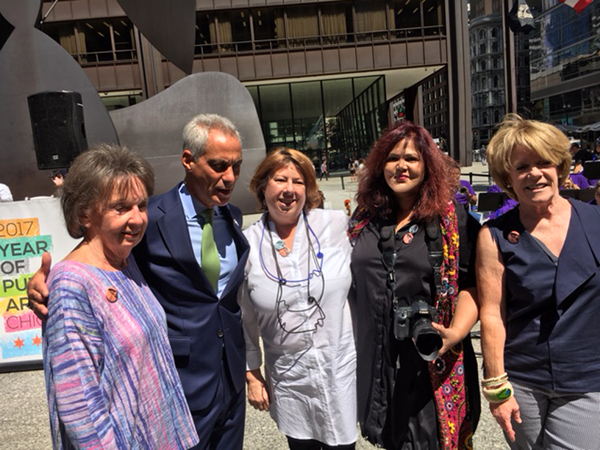