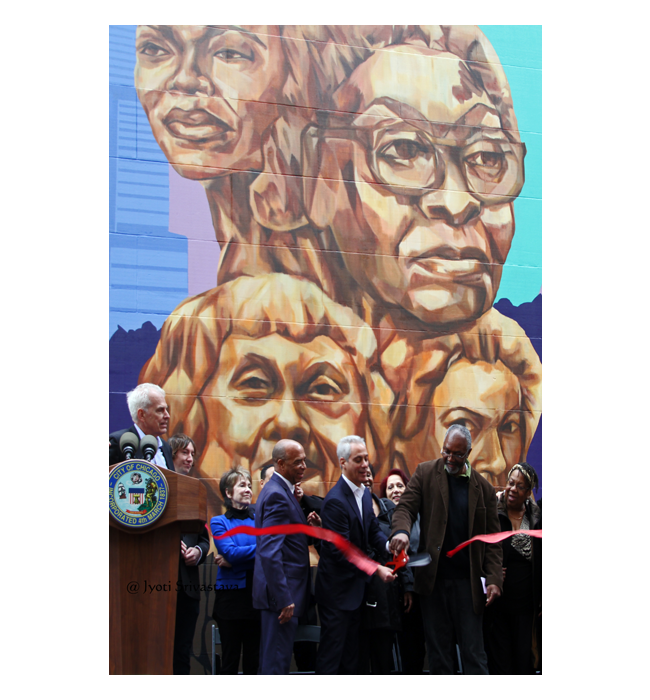 The mural honors 20 women who have shaped the city’s vibrant arts and cultural landscape.
For the names, please scroll down the post.

The  mural is part of Chicago celebrating the year 2017 as “The Year of Public Art”/ #YOPA.

The mural is funded by Murals of Acceptance, whose goal is to bring art to all people in a free public setting.

The design and vision created by Marshall will be executed by Chicago mural artist Jeff Zimmermann and his team from Jazim, Inc. 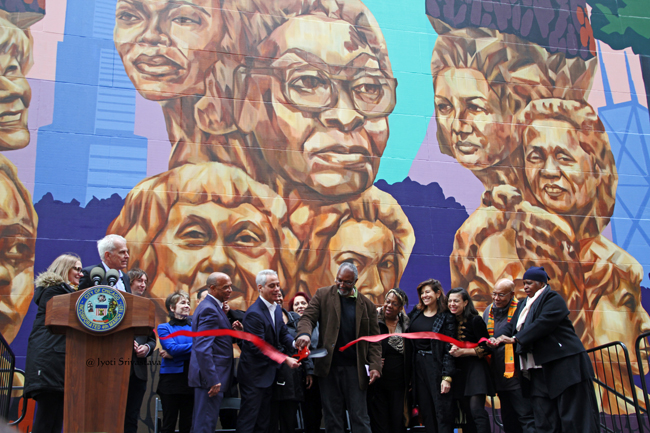 December 4, 2017: Mayor Rahm Emanuel and the Chicago Department of Cultural Affairs and Special Events [DCASE] alongside with internationally renowned artist and MacArthur Fellow Kerry James Marshall unveiled his epic, large-scale mural for the Chicago Cultural Center (78 E. Washington St.). The mural honors 20 women who have shaped the city’s vibrant arts and culture landscape. The 132-foot by 100-foot mural will be the largest artwork he has ever designed or created. 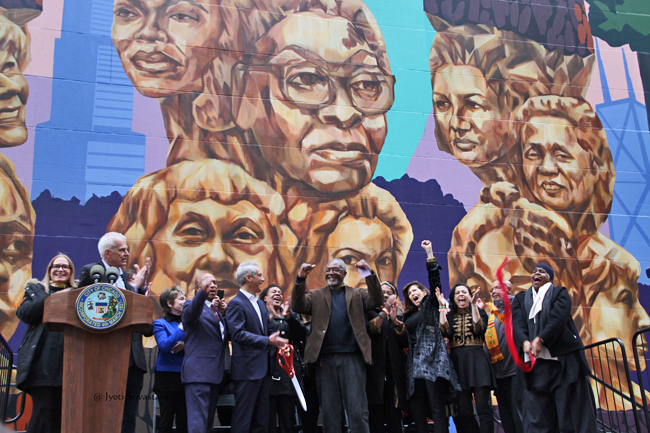 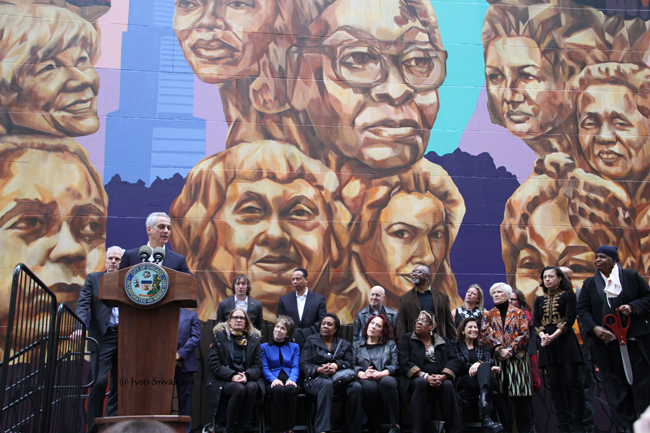 “Chicago is recognized across the country and around the world as an epicenter of innovative art, architecture and design,” said Mayor Rahm Emanuel. “Kerry James Marshall’s new mural on the iconic Chicago Cultural Center will be a strong addition to Chicago’s public art portfolio and a fitting commemoration of Chicago’s Year of Public Art.” 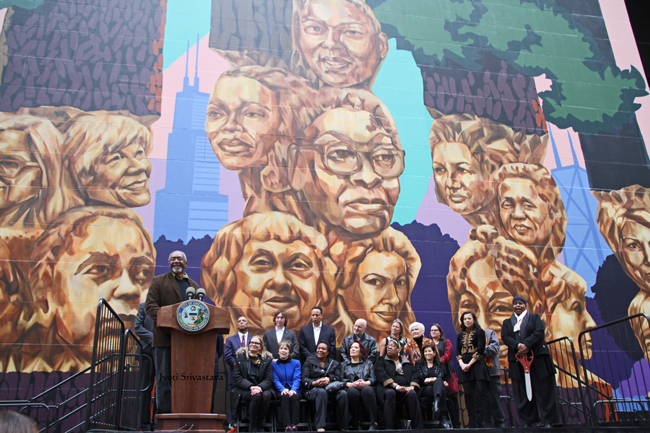 Kerry James Marshall gave an eloquent, impassioned speech..
“Cultural is made by individuals first, who then become institutions, and they inspire other individuals who make new institutions. This is how you keep the cultural life of a city alive, and how you keep it thrieving. Everyone who is represented here, they really are the backbone, the spine, the spirit, the heart of what it means by culture in Chicago. And I coudnt think of a better group of people to honor, and a better place to do it than the Cultural Center.”

“When I was asked to design a mural for narrow Garland Court, it was immediately clear to me that the site had to be ‘opened up’ in some way,” said Kerry James Marshall. “My solution was a park-like view with a bright sun and stand of trees to bring light and green space to the location while at the same time honoring the mission of the building as the hub of artistic activity in Chicago. My idea was to make of the trees a kind of Forest Rushmore acknowledging the contribution of 20 women who’ve worked to shape the cultural landscape of the city, past and present.” 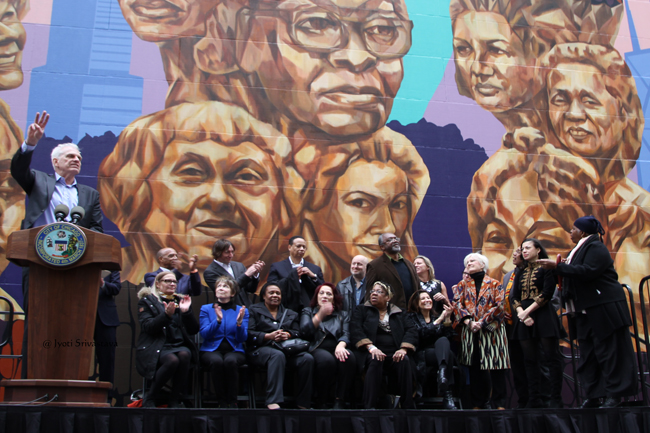 “Kerry James Marshall is one of our nation’s most acclaimed and important artists—and this mural for “The People’s Palace” is a true gift to the people of Chicago,” said DCASE Commissioner Mark Kelly. “The City of Chicago was thrilled to celebrate Kerry at the Fifth Star Honors this summer – and two of the women represented in his mural are past Fifth Star honorees: Lois Weisberg and Sandra Cisneros.”

“I wanted to collaborate with the finest artists alive today to make monuments that preach acceptance, love, and equality to everyone who sees them, and put them in place where everyone would,” said Kevin McCarthy, Founder of Murals of Acceptance.

The “Forest Rush More” mural is funded by Murals of Acceptance, whose goal is to bring art to all people in a free public setting. Murals of Acceptance was founded by Chicago native Kevin McCarthy and is supported by Marc and Lynne Benioff and by Patricia Arquette and David Arquette.

Kerry James Marshall is an artist and McArthur Fellow. A deeply accomplished artist, Marshall uses many types of mediums, including collage, drawings, murals and even comic books. His work is known for referencing African American culture and history, including the Civil Rights era and the Black Power movement. Painting in a realist style, he depictsdark figures that celebrate black beauty and confront general racial stereotypes within contemporary American society.

The design and vision created by Marshall was executed by Chicago mural artist Jeff Zimmerman and his team from Jazim, Inc.

The “Forest Rush More” mural is part of Chicago celebrating the year 2017 as “The Year of Public Art”. In 2017, the City of Chicago unveiled the city’s first Public Art Plan, presented exhibitions, and series of neighborhood events highlighting the city’s public art collection throughout the city. As the year comes to close, the city is also celebrating the completion of several new artworks as part of the 50 x 50 Neighborhood Art Project, a citywide initiative that commissioned dozens of local artists to create new sculptures, murals and other public artworks in Chicago’s 50 wards. The 50 x 50 Neighborhood Art Project represented a $ 1.5 million investment in artist-led community projects.

Guided by the 2012 Chicago Cultural Plan, Mayor Emanuel has outlined a citywide vision for art and culture that has incorporated public art into projects at a variety of City departments – including DCASE, as well as the Department of Transportation, Chicago Park District, Chicago Public Library and the Chicago Transit Authority, among others.

Grant support for the Year of Public Art is provided by Allstate Insurance Company and the Terra Foundation for American Art. 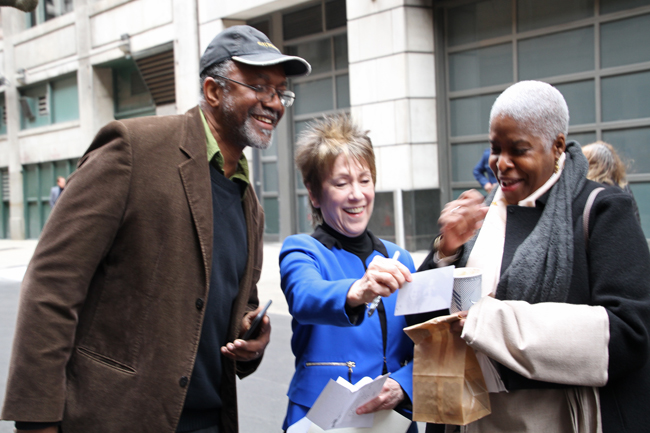 Kerry James Marshall with two women represented in the mural. 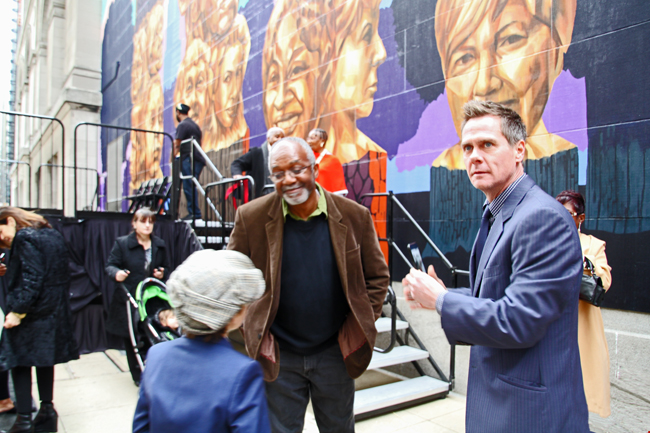 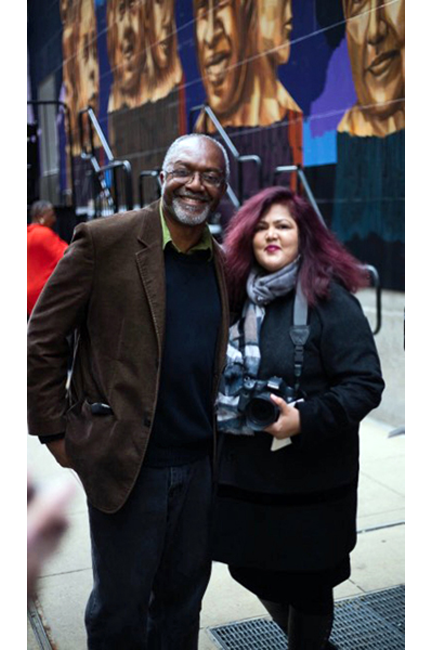 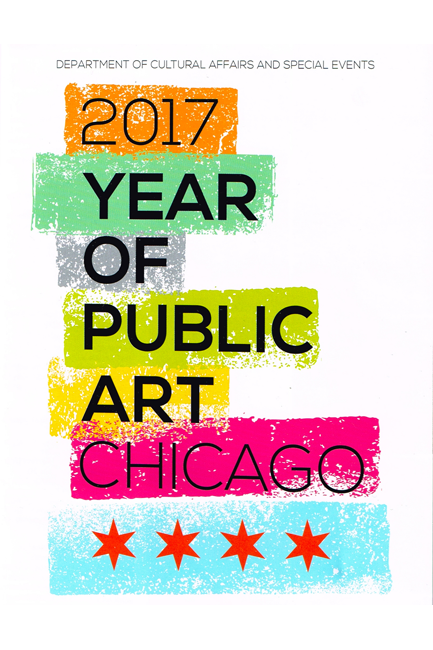