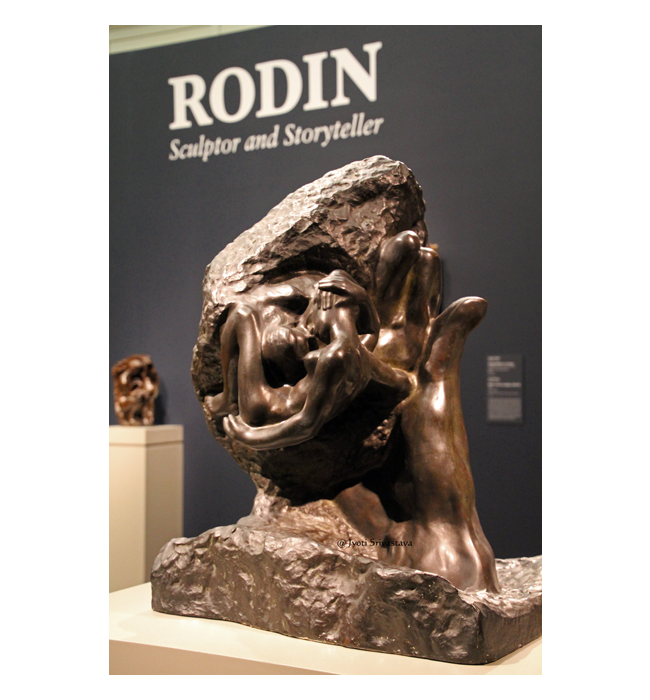 The public are weary of statues that say nothing.
Well, here is a man coming forward whose statues live and speak, and speak things worth uttering.
—Robert Louis Stevenson, 1886.

The year 2017 marks the 100 years of the death of Auguste Rodin [1840–1917]. At the beginning of the 20th century, Rodin was the most famous artist in the world. On the centenary of his death, the Art Institute joins museums around the world in celebrating the renowned artist’s life and work.

Rodin: Sculptor and Storyteller
is a small but brilliant exhibition at the Art Institute of Chicago.

Rodin was a master of visual communication. Rodin was a master of visual communication. He had an extraordinary talent to sculpt human bodies that told stories. In 1877 he created “The Age of Bronze,” a sculpture that so closely resembled a real human that critics claimed it to be directly cast from a live person. Stung by this experience, his future sculptures were larger or smaller than life.

Rodin is recognized as the most important sculptor of the modern era. He was a naturalist. He departed from the idealism of the Greeks, and the decorative beauty of the Baroque. His sculpture emphasized the individual and suggested emotion through detailed, textured surfaces, and the interplay of light and shadow.

The exhibition has some outstanding work by Rodin. I would add here.. the texts with the sculptures are excellent. Read them and enjoy the sculptures even more.. For example, Rodin’s famous “Thinker”.. “What makes the thinker think, is that he thinks not only with his knitted brow, his distended nostrils, and compressed lips, but with every muscle of his arms, back and legs, with his clinched fist and gripping toes.” Here the sculptor suggests the extreme physicality of mental activity.

Some of my favorites in the exhibition are..
Hand of God
I am Beautiful
Eternal Springtime
The Thinker
Adam and Eve.

My absolute favorite is “The Hand of God.” The in-the-round sculpture is so different as we move around it.. On one side is the massive hand, the other side depicts an embryonic couple, probably Adam and Eve, emerging from a formless mass cradled in God’s hand.

In addition to these stellar objects, the exhibition displays photographs, drawings, prints, and sculptures by the artist’s friends and contemporaries, such as Claude Monet and Henri Matisse. Lifelong friends, Rodin and Monet exchanged gifts of art, corresponded regularly, and even held a joint exhibition in 1889 at the Galerie Georges Petit in Paris. Early in his career, Matisse engaged with the work of Rodin, and his Serf is deeply indebted to the older master’s Walking Man. These two exceptional pieces, both from the Art Institute’s collection, are displayed together here for the first time. 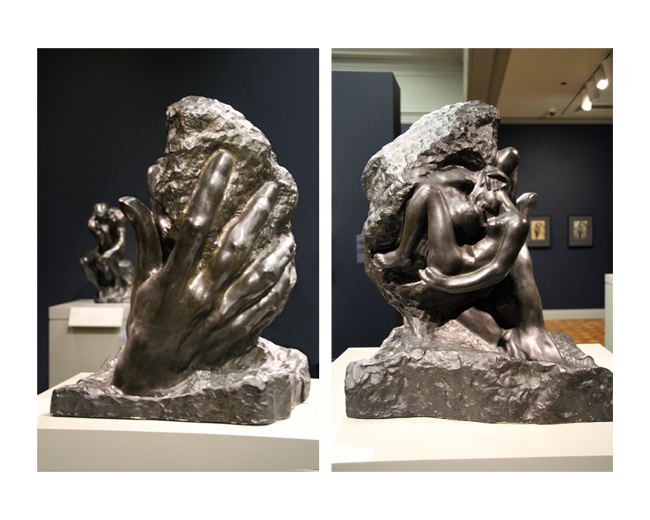 The Hand of God – by Auguste Rodin

The sculpture evokes the biblical account of the creation of human kind, which Rodin imagined as an act of sculpting. The work depicts an embryonic couple, probably Adam and Eve, emerging from a formless mass cradled in God’s hand. Rodin distilled the story of its essential elements by reducing the figure of God to a single massive hand. 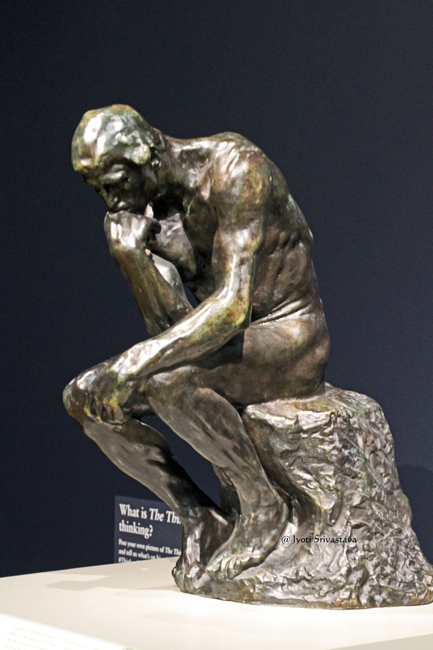 The Thinker – by Auguste Rodin

The Thinker – Auguste Rodin
Modeled about 1880.

Perhaps Rodin’s best known sculpture. This is the original size. The Thinker was conceived as a representation of the Italian poet Danie Alighieri [ about 1265-1321].

Its nudity and generalized facial features however transformed the figure into universal embodiment of the artist or poet. Here the sculptor suggests the extreme physicality of mental activity. “What makes the thinker think , is that he thinks not only with his knitted brow, his distended nostrils, and compressed lips, but with every muscle of his arms, back and legs, with his clinched fist and gripping toes.” 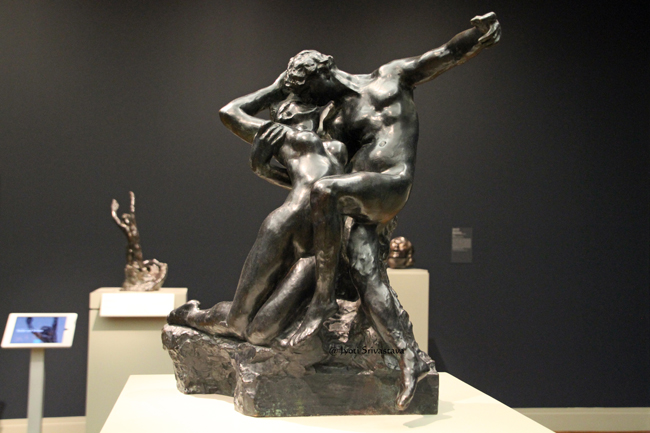 The iconic representation of two young lovers was one of Rodin’s most popular compositions. But this is an extremely rare version. Both its size and sense of motion, as well as depiction of male figure’s arm and legs is midair, reflect the artist’s original conception. Very few examples of this version exists is it was technically difficult to produce. The hundreds of later examples all provide support for the male figure’s arm and legs. 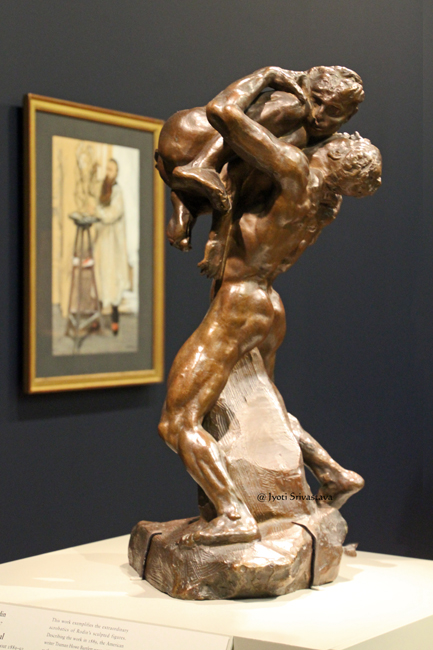 I Am Beautiful – by Auguste Rodin

This work exemplifies the extraordinary acrobatics of Rodin’s sculpted figures. Describing the work in 1889, the Anmerican critic Truman Howe Bartlett wrote, It seems as if the soul of the woman in her haste to meet her lover, had shot through the air like a thought, to find rest in his arms.” A rare and early cast of one of Rodin’s first founders. 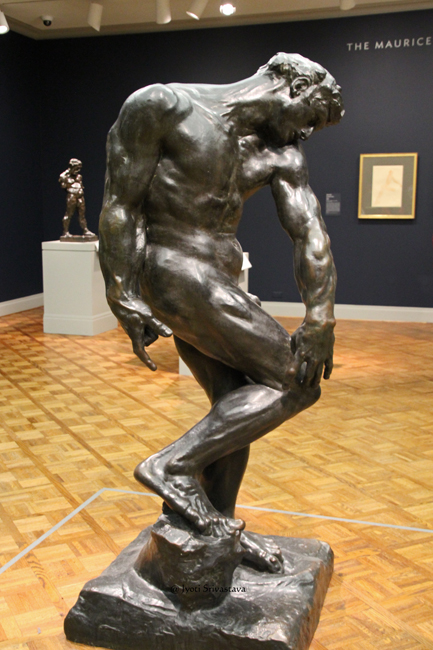 The twisted unnatural pose of this sculpture suggests the torments of the body that accompanied Adam and Eve’s fall from grace and expulsion from the Garden of Eden. Pointing a massive figure towards the ground, Adam emphasized his earthbound mortality. The sculpture was influenced by monumental figures and exaggerated musculature of Michelangelo’s statues, particularly his depiction of slaves. 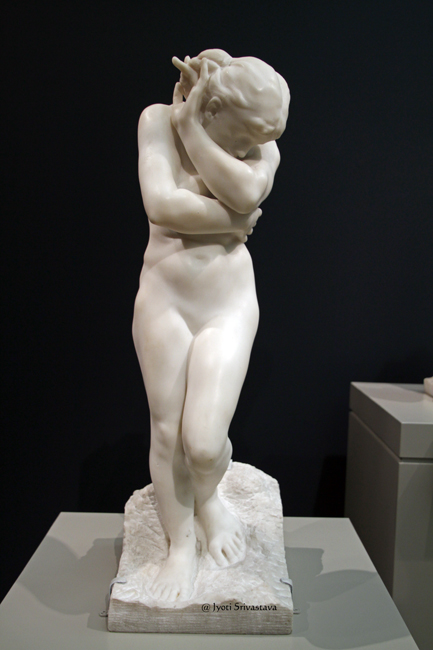 This is a reduced version of the sculpture Rodin produced as a companion piece to his monumental Adam of 1881. As in that work, Rodin depicted biblical Eve following her fall from grace and expulsion from the Garden of Eden. Newly ashamed of her nakedness, she folds her arms around her body and lowers her head within the bend of her elbow. Her twisting pose echoes the coils of the serpent that tempted her in the garden.

Rodin’s Eve enjoyed great popularity and he carved multiple versions in marble, though no two are exactly alike. The two Eves presented in the exhibition are among the earliest examples. Later versions became more massive in appearance, with less open space between the limbs and body and more uncarved marble. 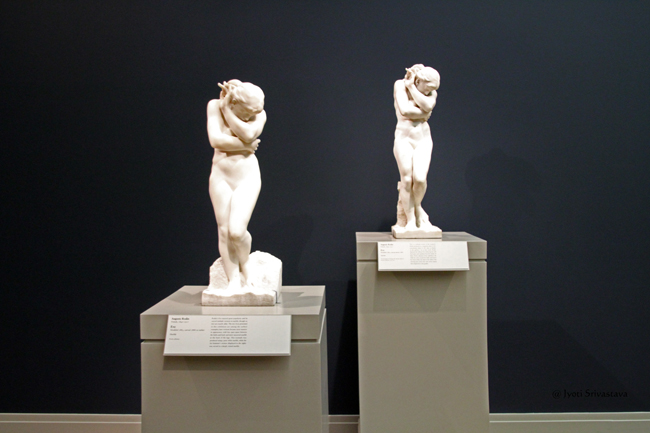 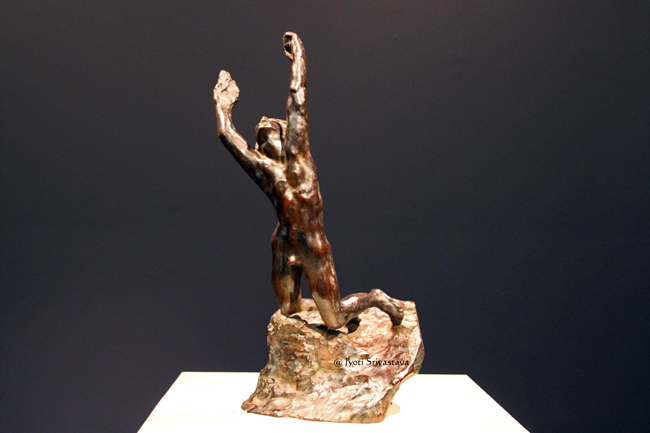 The Prodigal Son – by Auguste Rodin

The Prodigal Son – by Auguste Rodin

The biblical parable of the prodigal son tells the story of a wayward youth who, after squandering his inheritance returns home to beg for forgiveness. The richly patinated cast is the same size as Rodin’s original clay model. Unlike the enlarged versions, it retains the tense imbalance of the sculptor’s composition, with the figure’s left leg hovering in the space as his body leans forward. This pose, which is impossible for model to hold, creates ambiguity. Is the figure sinking on his knees for forgiveness, or rising after being forgiven? Rodin emphasized emotional expressiveness in the sculpture by departing from strict adherence from nature, “I have accentuated the swelling of the muscles that express distress. Here, here, here I have exaggerated the distance between the tendons that reveal the outbursts of prayer. 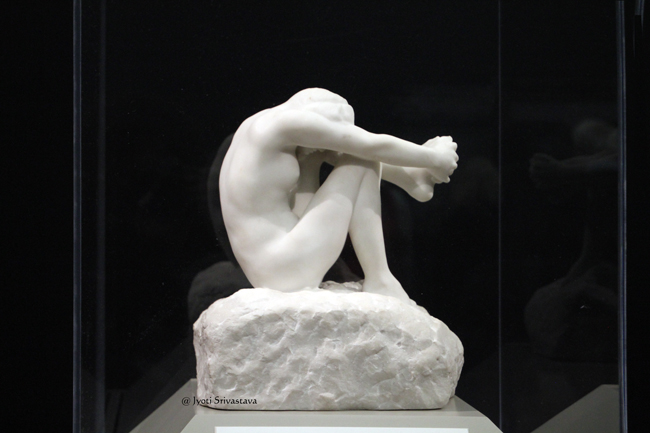 This pose is entirely new invention on the part of the sculptor: the figure’s action is stretching out and simultaneously folding her body inward in a powerful evocation of emotional distress. Rodin originally intended the composition to be displayed on the left door of his monumental bronze portal “The Gates of Hell,”. This was the first example of the work. Carved in marble, plaster cast were later taken from it to produce bronze versions. 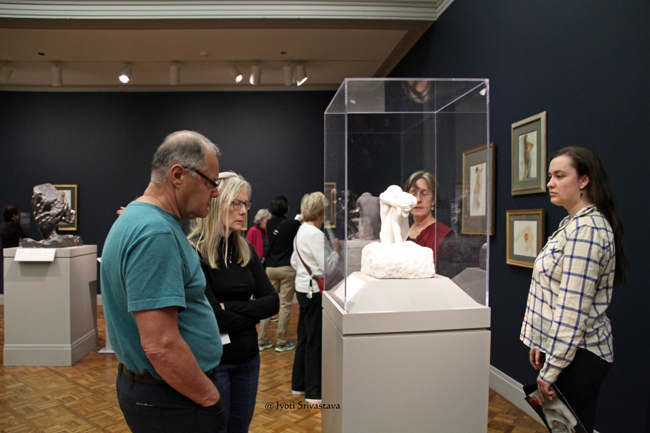 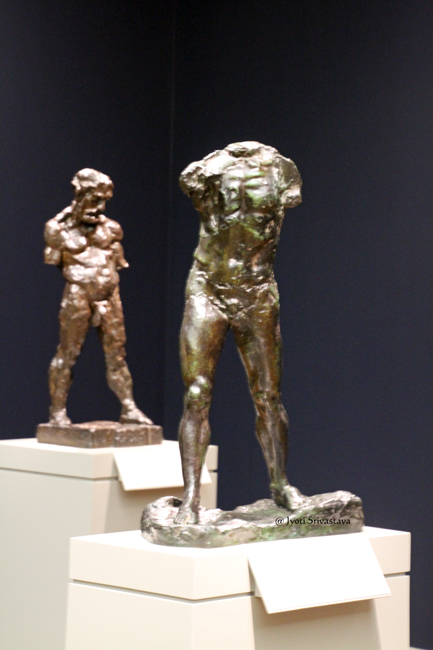 Right: The Walking Man – by Auguste Rodin / Left: The Serf – by Henri Matisse.

One o Rodin’s most audacious sculptures “The Walking Man,” combines two separate studies – of the legs and of the torso – for his earlier statue Saint John the Baptist Preaching [1878]. It explifies his process of rethinking, reworking and reassembling fragments of composition. When it was first exhibited, critics felt that the feet was too firmly grounded to convincingle portray movement. Rodin hoiwever argued that the artist’s task was to convey movement rather than the single instant of a photograph, “for in reality time does not stand still.”

Rodin was at the height of his fame when in 1899, the young artist Henri Matisse first visited his studio. It was probably the first time that Matisse first encountered Rodin’s “The Walking Man.” With the thematic similarities of The Walking Man, its deliberate fragmentation of the body, and its unapologetic display of physical marks and accidents of the modeling process. The Serf reflects Matisse’s engagement with Rodin’s practice and legacy. 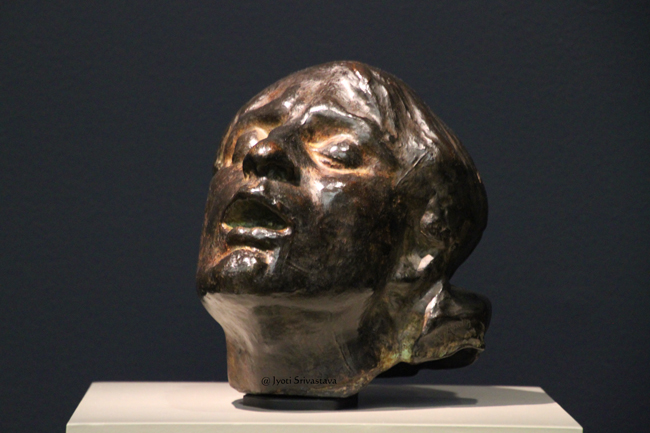 Head of Sorrow – by Auguste Rodin 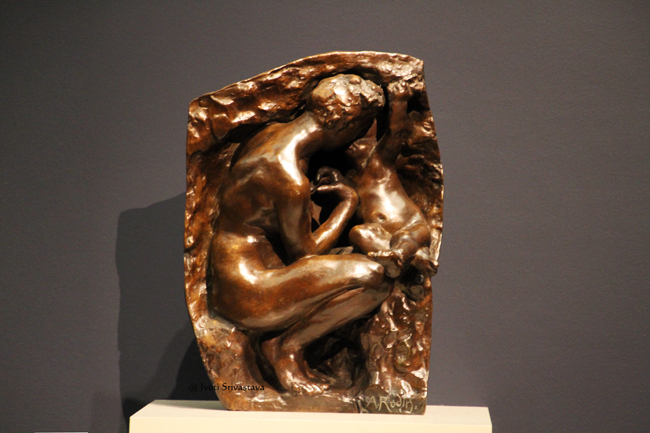 Young Mother in a Grotto – by Auguste Rodin 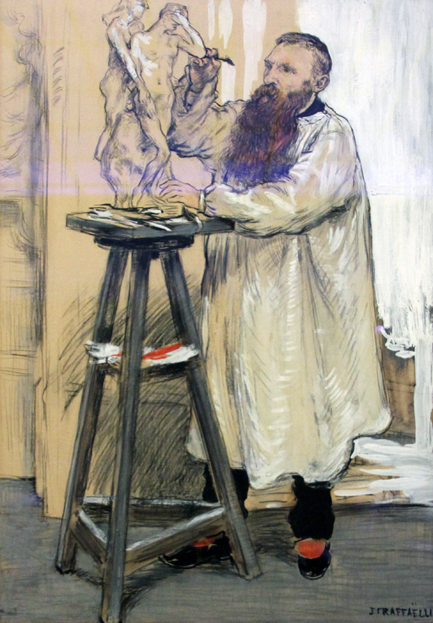 Portrait of the Sculptor Auguste Rodin in his Studio – by Jean-François Raffaelli.

My posts on the Art Institute of Chicago.. click here..