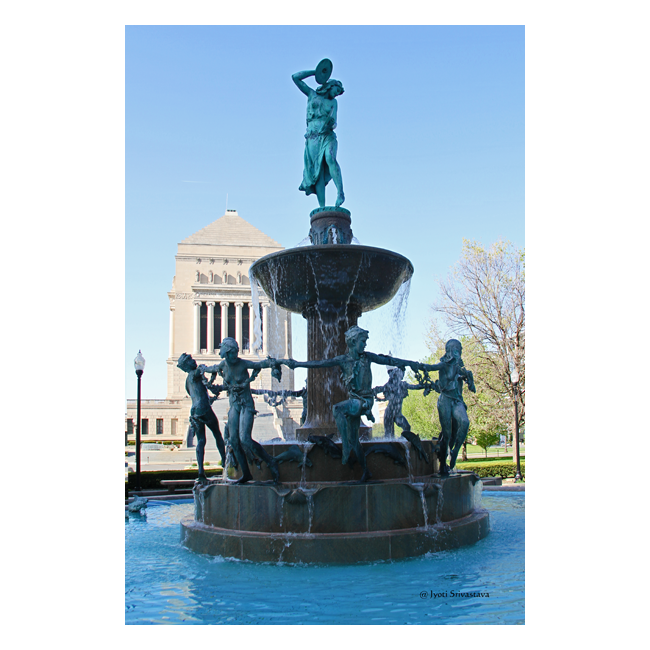 The University Park is a National Historic Landmark, the highest designation of historic site recognized by the federal government.

The first question that comes to mind is, why would it be called the University park, when no university exists there?
The State of Indiana, in the 1827 legislative session, had designated this land as property for a state university. However, that idea never came to fruition. Twenty-five years later, campus buildings were constructed for a seminary. The seminary used this site for a mere eight years, from 1852 to 1860. Once vacated, this site was used to prepare Union troops for a confrontation with the Morgan’s Raiders during the Civil War. After the Civil War was over, the people of Indianapolis raised funds to transform this land into a park.

University Park has many pieces of public art:
– Richard J. Depew Fountain: In the center of the University Park is the Richard J. Depew fountain that was built in 1919. There are five levels to the fountain. The different tiers are decorated with bronze fish, children playing, frogs and a woman draped in a toga.
– A sculpture of President Benjamin Harrison, Indiana’s only president, stands on the south center edge of the park.
– Statue of of Abraham Lincoln at the southeast corner of the park.
– Sate of Schuyler Colfax, Vice President under Ulysses S. Grant, in the east center portion of the park.
– Pan and Syrinx: Additional statuary includes Syrinx, the wood nymph on the east side of the fountain listening to the music that Pan, the satyr, is playing on the west side of the fountain. 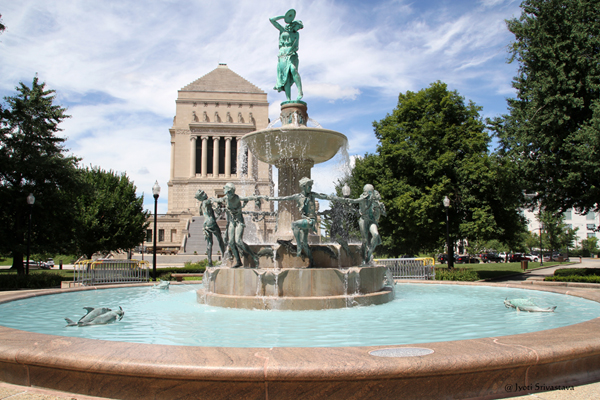 The Smithsonion American Art Museum click here.. catalog informs..
The fountain, which cost $50,000, was given to the City of Indianapolis by Mrs. Emma Ely Depew in memory of her husband Dr. Richard Johnson Depew. Commissioned by Mrs. Depew, Karl Bitter created the design for the fountain, but was killed in a traffic accident in 1915 before he could finish the work. Although Bitter’s overall design was carried out, the fountain is largely the work of Alexander Stirling Calder who took over the project after Bitter’s death. Architect Henry Bacon designed the architectural setting for the sculpture, and Calder modeled the figures and oversaw the execution of the fountain. In completing the fountain, Calder made substantial changes to the character and grouping of the figures. 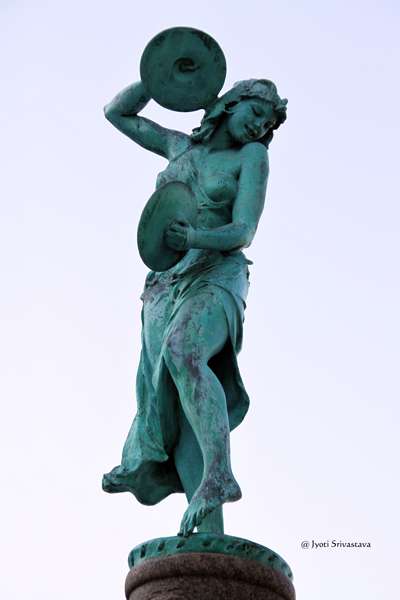 Depew Memorial Fountain: The granite fountain has a bronze Naiad surmounting the fountain, clashing her cymbals as she dances in wild abandon. In Greek mythology, Nainad were a type of nymph who presided over fountains, wells, springs, streams, and brooks. The lower-tier has eight bronze figures dancing around the center of the fountain basin. 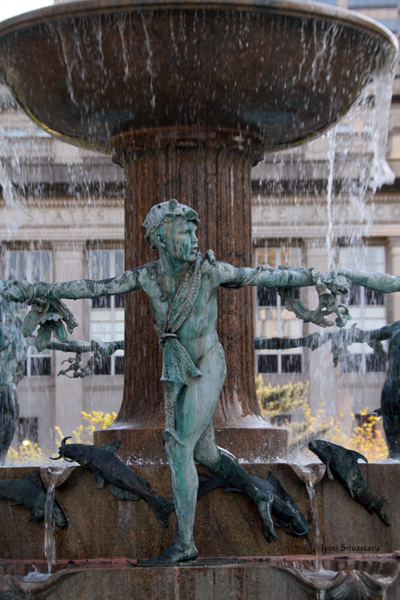 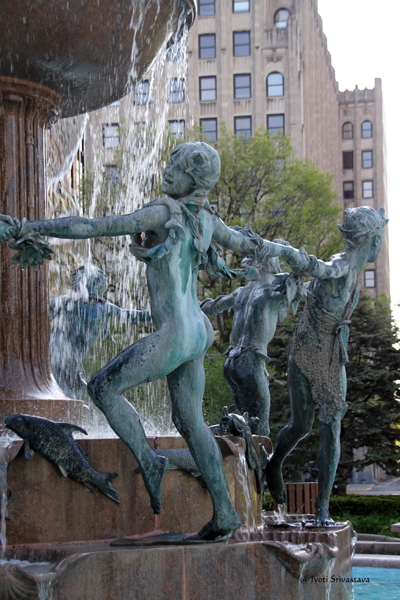 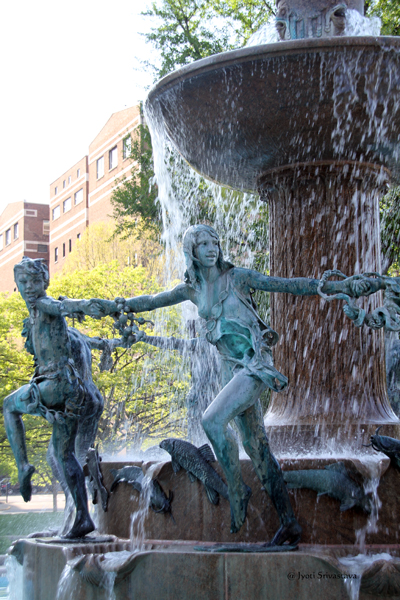 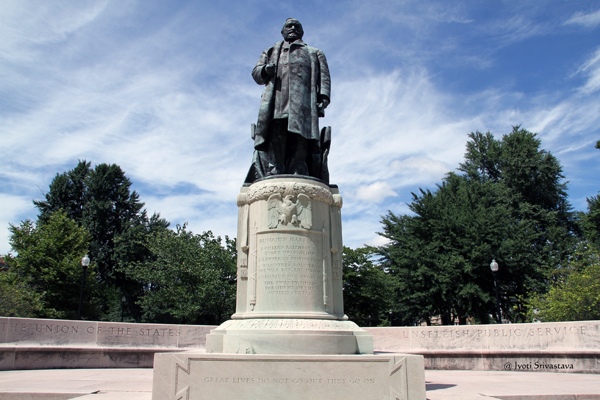 President Benjamin Harrison, Indiana’s only president, stands on the south center edge of the University Park 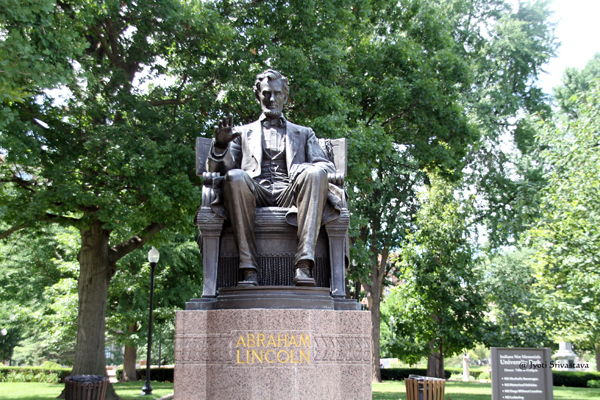 Abraham Lincoln at the southeast corner of University Park 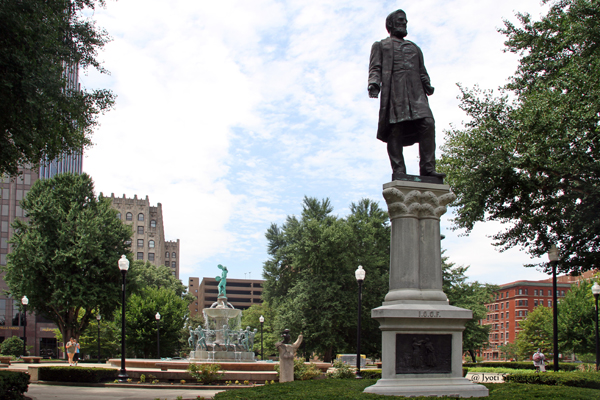 Schuyler Colfax, Vice President under Ulysses S. Grant, in the east center portion of the park. 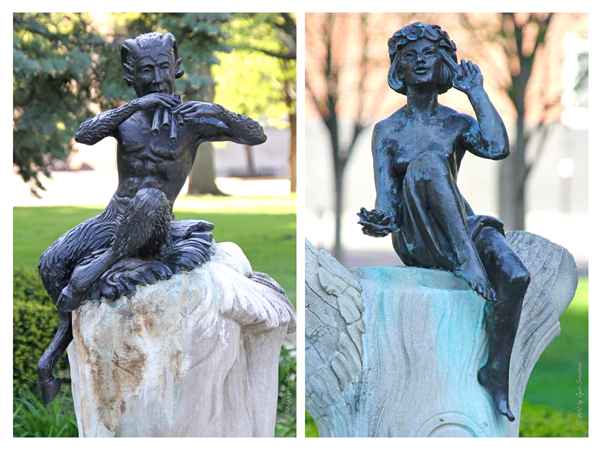 Pan and Syrinx at University Park 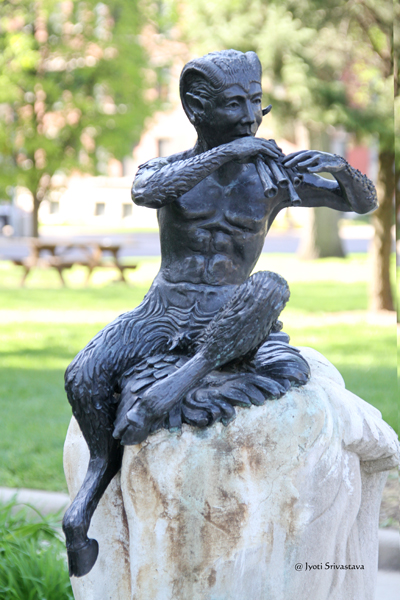 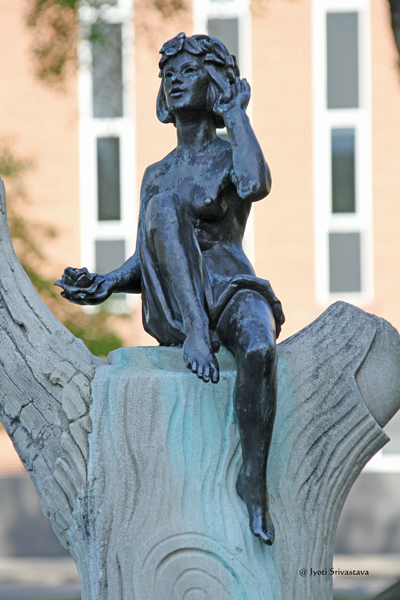