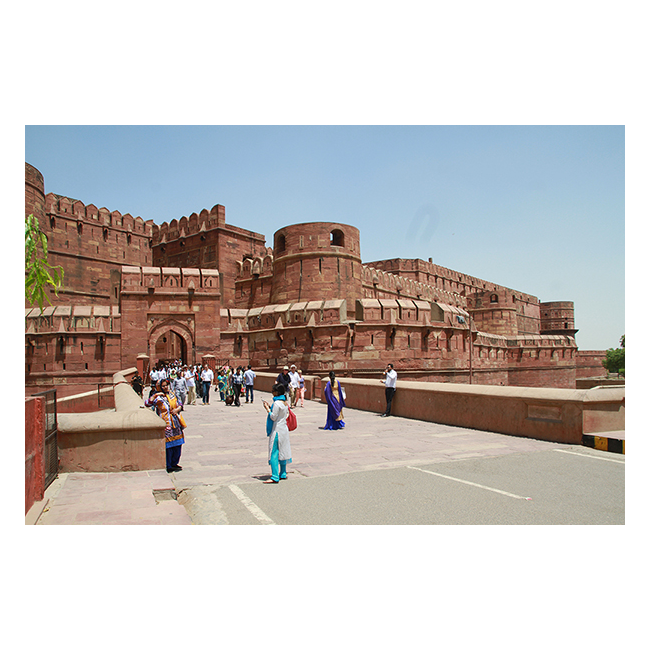 The site was inscribed on the World Heritage List in 1983.

AGRA FORT is said to be the most important fort in India. The great Mughals – Babur, Humanyun, Akbar, Jehangir, Shah Jehan and Aurangzeb – lived here. It was visited by foreign ambassadors, travellers and highest dignitaries who participated in making of medieval history of India. No other Fort in India had this honor.

This powerful fortress of red sandstone encompasses within its 2.5-km-long enclosure walls, the imperial city of the Mughal rulers. The forbidding exterior hides an inner paradise. There are a number of exquisite buildings like  Diwan-E-Am, Diwan-E-Khaas, Musamman Burj – where Mughal Emperor Shah Jahan died in 1666 A.D., Jahangir’s Palace, Khaas Mahal and Sheesh Mahal and Moti Masjid – a white marble mosque akin to a perfect pearl.

The construction of the Agra fort was started around 1565, when the initial structures were built by the Mughal Emperor Akbar, and subsequently taken over by his grandson Shah Jahan, who added most of the marble creations to the fort. The fort is crescent shaped, flattened on the east with a long, nearly straight wall facing the river. It is ringed by double castellated ramparts of red sandstone, punctuated at regular intervals by bastions. A 9m wide and 10m deep moat surrounds the outer wall. An imposing 22m high inner wall imparts a feeling of invincible defensive construction. The layout of the fort was determined by the course of the river, which in those days flowed alongside. The main axis is parallel to the river and the walls bridge out towards the city. 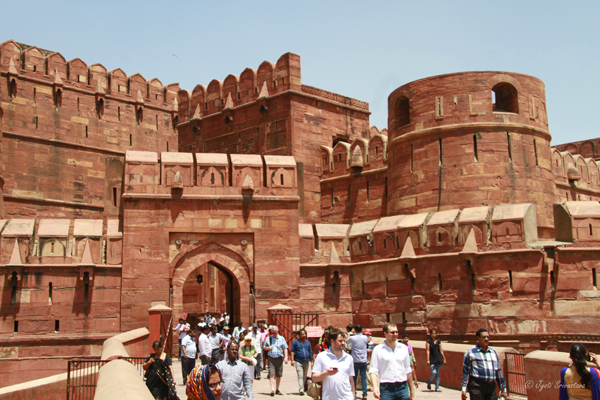 The fort had originally four gates, two of which were later walled up. Today, visitors are allowed entry only through the Amar Singh gate. Jehangir Mahal is the first notable building that the visitor sees as he enters through Amar Singh gate. 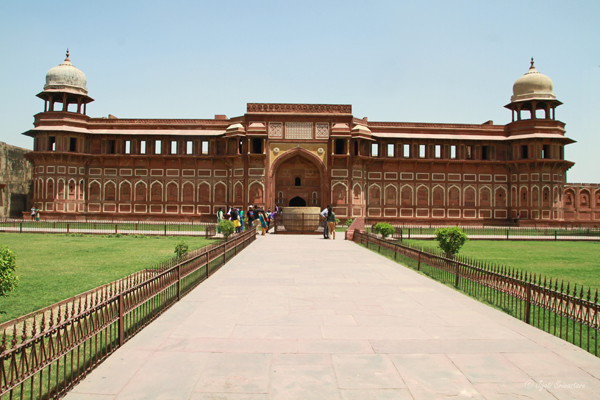 After coming from the Amar Singh Gate, we see the beautiful building called Jehangir Palace. It is a double-storey building of red sandstone. The so-called Jahangiri Mahal, despite its name, was built by Akbar for his son Jehangir, who was the heir to the Mughal throne. It is one of the earliest surviving buildings of Akbar’s reign and the earliest palace extant. It was built as the women’s quarters. Outside is a large ornamental stone bowl, on which Persian verses have been carved. The bowl probably contained fragrant rose water. Akbar built a palace, adjacent to Jehangir Mahal, for her favourite queen Jodha Bai. 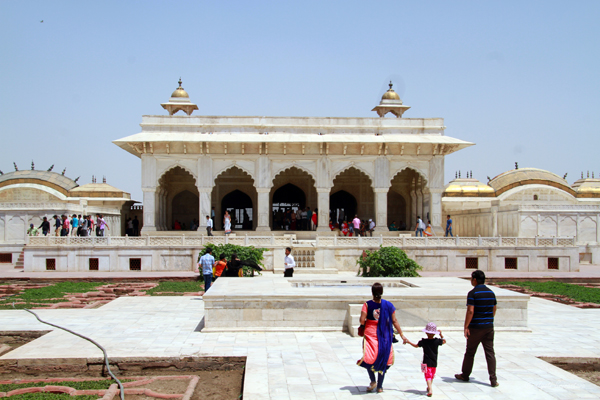 Khas mahal was built by Shah Jahan, entirely of marble. The Khaas Mahal demonstrates distinctive Islamic-Persian features, which are well blended with a striking range of Hindu features such as chhatris. It is considered to be emperor’s sleeping room or ‘Aramgah’.

On both sides of the Khas Mahal is an oblong golden pavilions, said to be apartments of Shah Jehan’s daughters Jehan Ara and Roshan Ara [image below].  On the left of the Khaas Mahal, is the Musamman Burj, built by Shah Jahan. It is a beautiful octagonal tower with an open pavillion. 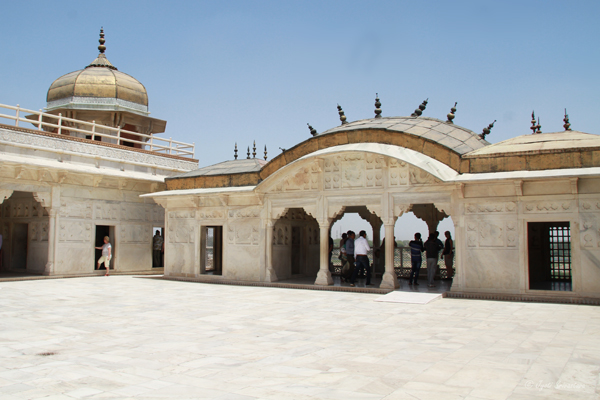 Golden Pavilions on side of Khas Mahal.  The octoganal tower to the left is Musamman Burj / Agra Fort

On either side of the Khas Mahal is an oblong pavilion. These pavilions are constructed in red sandstone and thoroughly stuccoed shining like white marble. The southern pavilion was residence of Jahan Ara Begum, the elder and the favorite daughter of Shah Jehan. The northern pavilion was residence of Roshan Ara Begum, the other daughter of Shah Jehan. The above image shows Roshan Ara pavilion and the octagonal tower to the left is Musamman Burj. 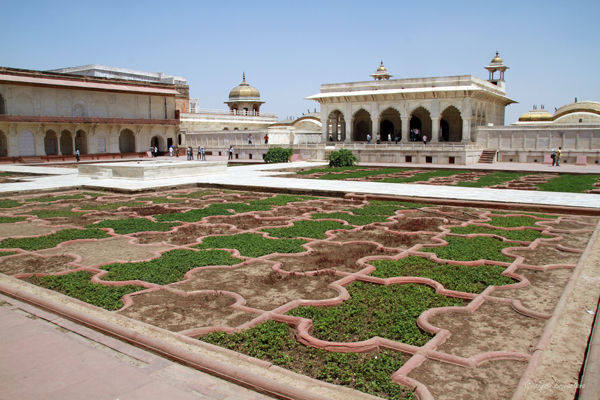 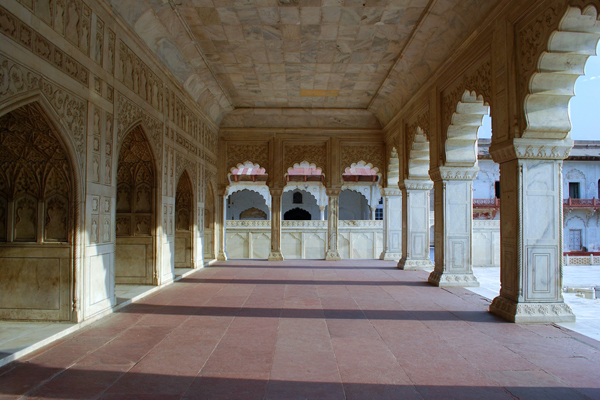 Audience was built by Shah Jehan in 1637. It consists of two big halls. The pillars and arches are inlaid with semi-precious stones and colored flowers. The famous Peacock Throne of Shah Jehan was placed here.

Palace of Mirror is situated on the western side of the Muthamman Burj below the Diwan-i-Khas hall. Shah Jehan built it in 1637 to be used as luxurious bath for Khas Mahal.

* I cant believe I missed seeing the Sheesh Mahal – so no images.

Sheesh Mahal was so named because of the extensive use of mirrors in its arches, walls and ceilings. It consists of two large chambers connected through a broad arched opening in the center and two narrow passages on the sides. Both these chambers had a marble tank with fountains and arrangements for hot and cold water.

The outer hall has dado panels with  plants painted in the center and inlaid borders . Black and red colors have been used abundantly. The stucco relief work in the panels above them depict ‘guldasta’ or bunch of flowers in combination with glass mosaic work and may have contained mirrors or beautiful portraits at some time. The inner walls have  no inlay work on the dados but they have been  painted to lend them the desired beauty. 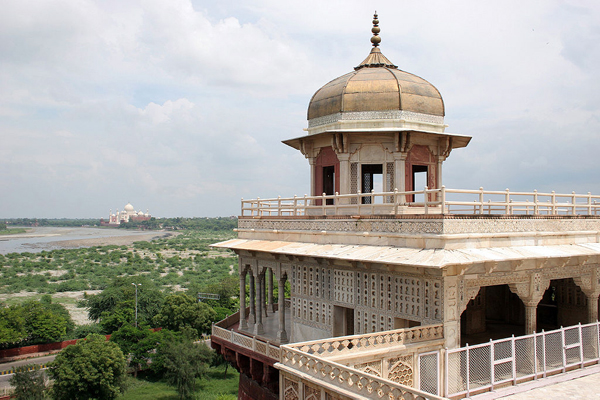 Muthamman Burj is a large multi-storied building with octagonal tower. The building is made of entirely of white marble. It has deep ornamental niches on the walls. The dados have repetitive stylized inlaid carved plant in the center and creeper in the border. Pillar brackets and lintels are also exquisitely inlaid with semi-precious stones. The verandah has a beautiful carved fountain in the center. It is one of the most profusely ornamented buildings of Shah Jehan.

The palace was directly connected to the Diwan-i-Khas, Sheesh Mahal , Khas mahal and other palaces. It is from here that the Mughal Emperor governed the whole empire. The Taj Mahal is in full view from here.

It is here that Shah Jehan was kept as a prisoner by his son Aurangzeb [1658-1666]. It is the death place of Shah Jehan, where he breathed his last in the lap of his daughter Jahan Ara, gazing towards the Taj Mahal. His body was taken by boat to Taj Mahal, and buried next to Mumtaj Mahal.

Meena Mosque: was built by Aurangzed for the use of Shah Jehan, when he was in captivity in Agra Fort. 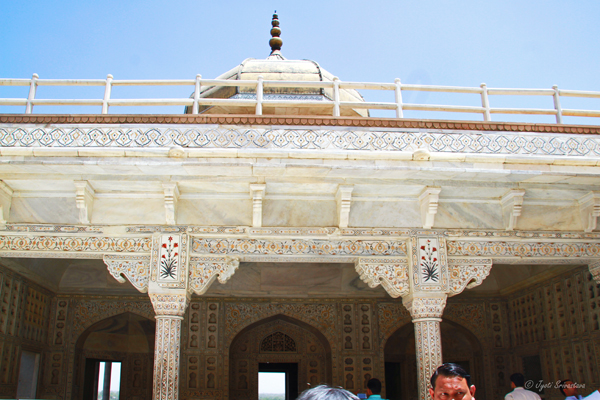 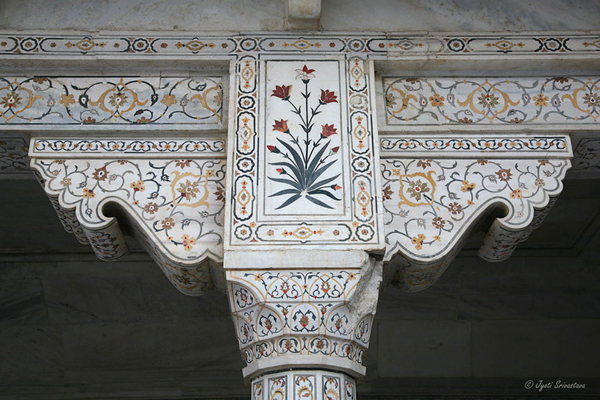 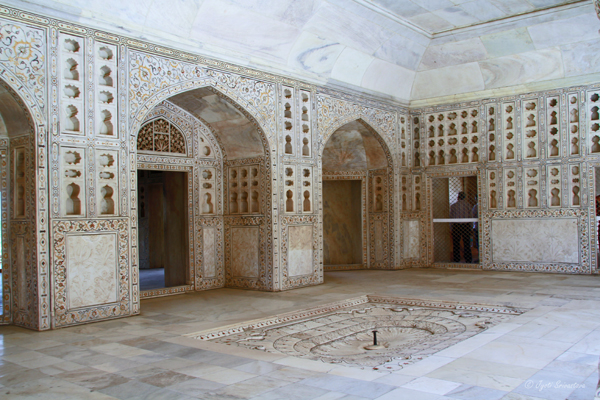 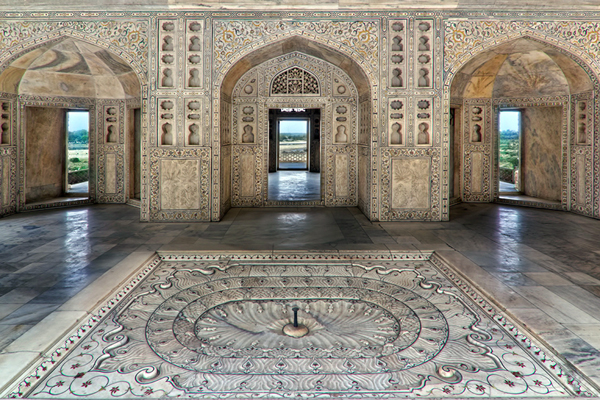 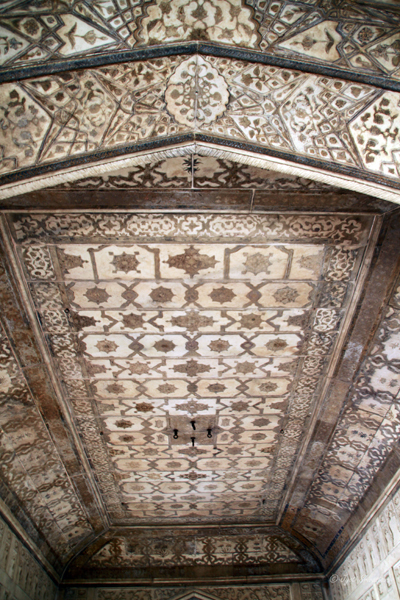 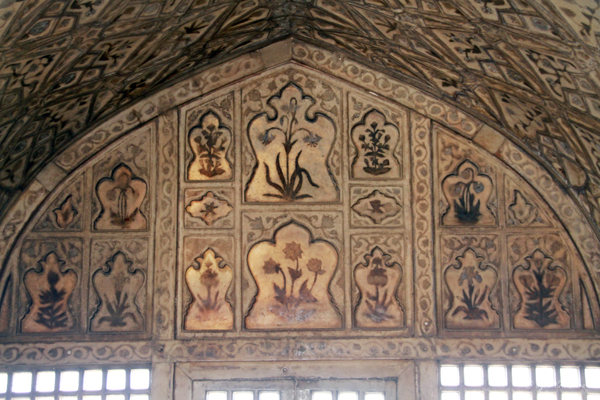 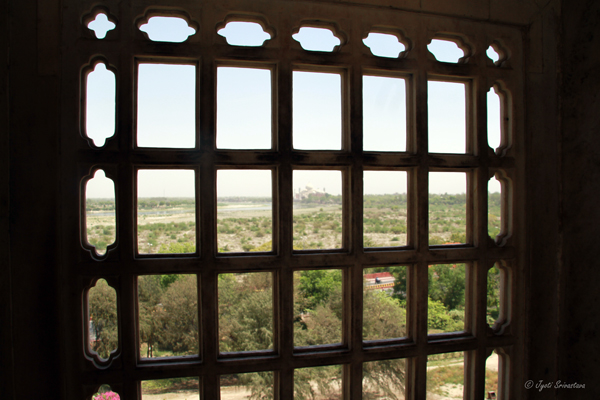 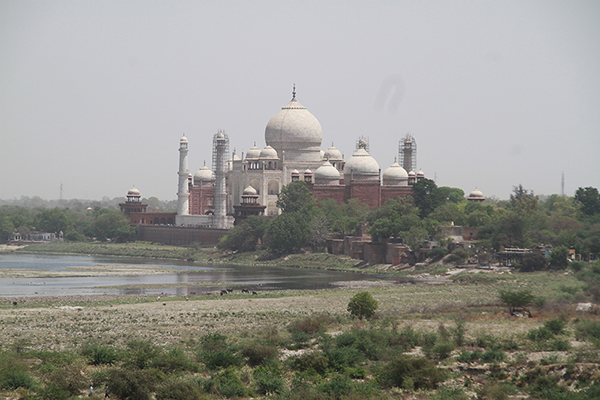 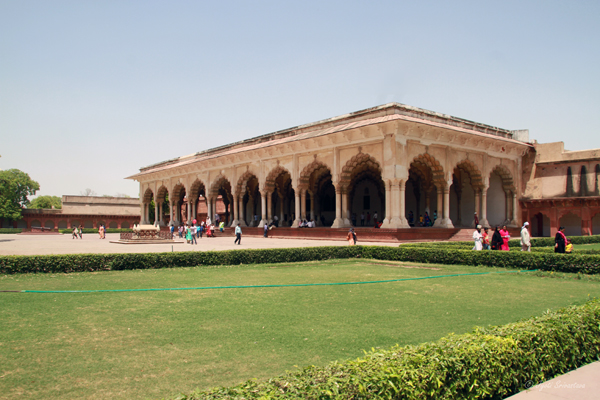 Hall of Public Audience was constructed by Akbar the Great , and is situated to the west side of Machli Bhawan. It was remodelled by Shah Jehan, who built pillars, arches and ceiling with inlay marble work. The throne room too was built by Shah jehan, where the Royal Durbar was held to hear the petitioners. 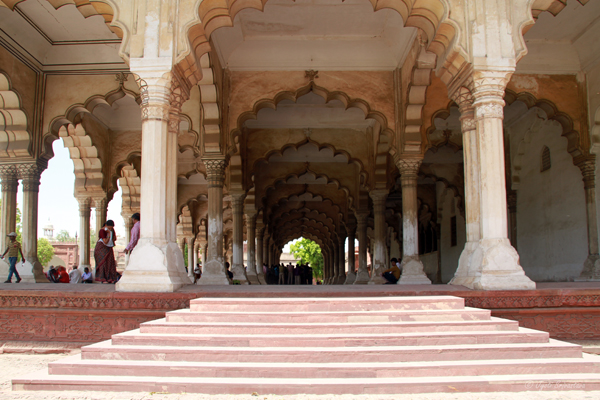 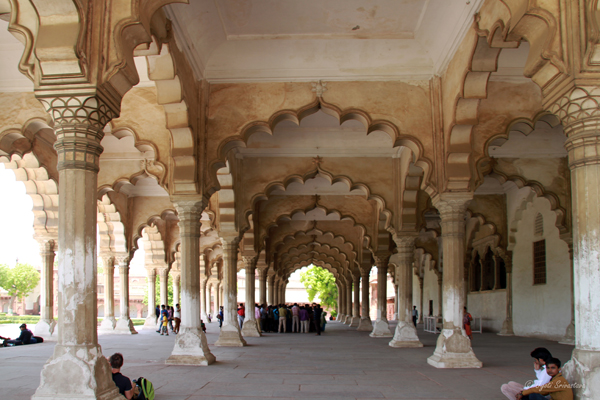 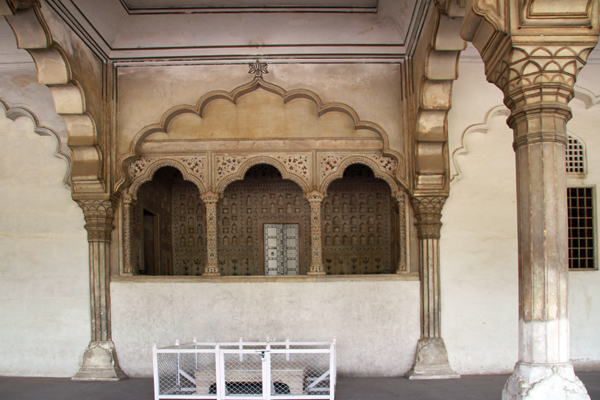 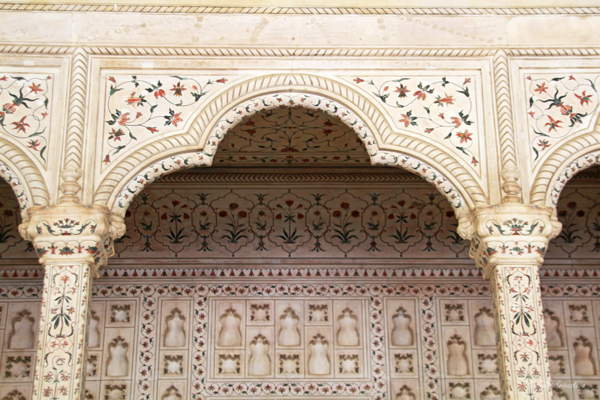 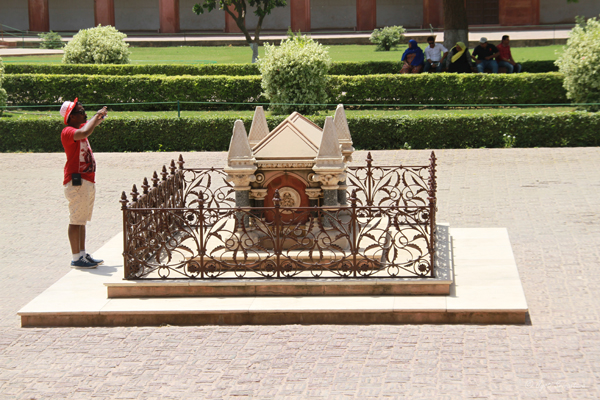 This tomb is situated on the south side in the quadrangle of the Diwan-i-Am. It is an open grave with some decoration in stone. Lord Colvin was stationed at Agra, as Lieutenant Governor of the North Frontier Provinces. During the First War of Independence on July 5,1857 the British troops suffered heavy loss at Agra because of the aggressive attack of the Indian Freedom Fighters. Lord Colvin who had taken shelter in the Agra Fort died of cholera in the central room of the Shah Jahani Mahal. The inscription on the tomb records that Lord Colvin was born on 29th May 1807 and died on 9th September 1857. 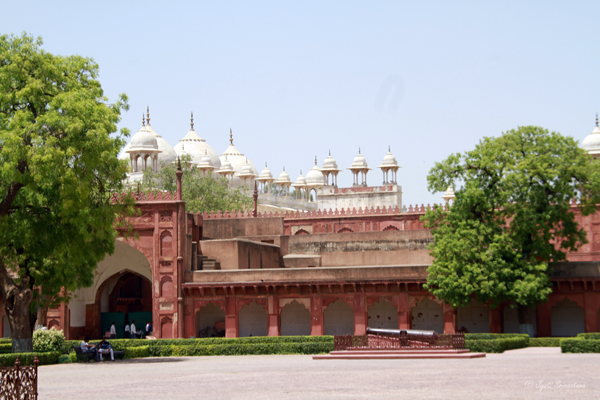 Moti Masjid, as seen from Diwan-I-Am – was closed for the public / Agra Fort

Water Gate: This gate is situated in the middle of the wall which is in the way of the Yamuna River. During the time of the Mughals, the flowing water used to touch the walls of the fort. The gate was the entrance door of the bathing room and was used by harem ladies. The gate is now closed.

Elephant Gate or Delhi gate. At present this gate is under military occupation and general public is not allowed to use it.

Darshani Darwaza: the Mughal emperor used to worship the rising sun from this gate. It is situated in the lower part of Jasmin Tower.

Akbari Mahal: Siturated on the south -east of Jehangiri mahal. It is now in ruined state. 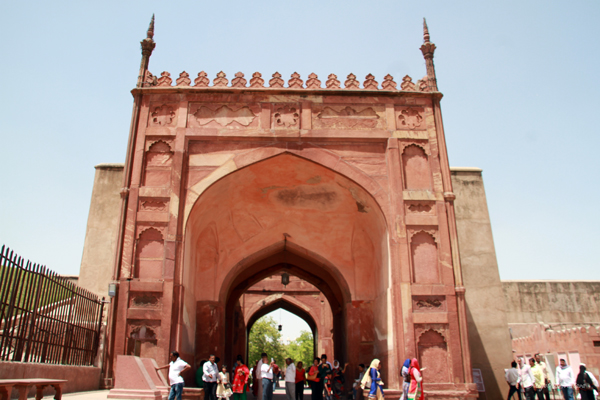 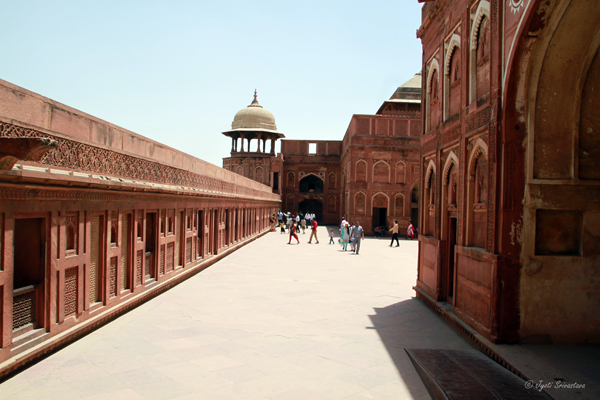 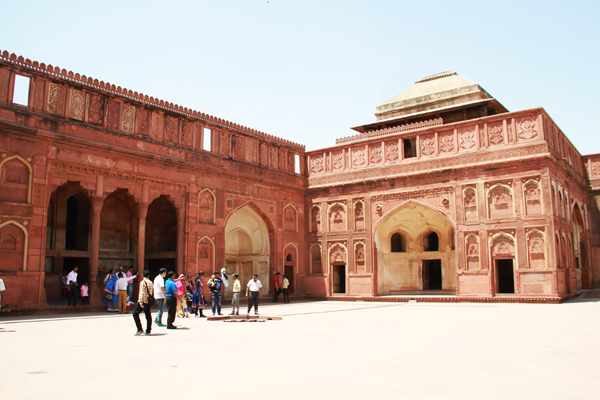 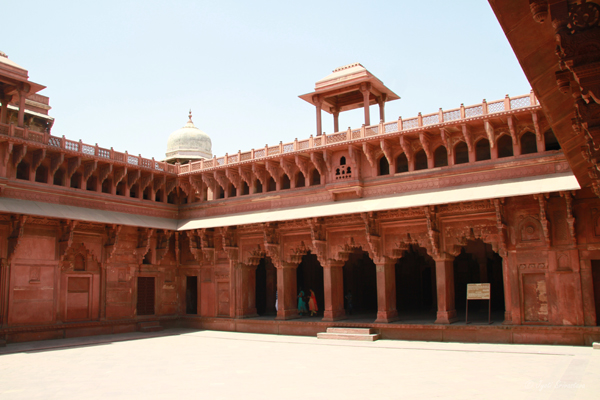