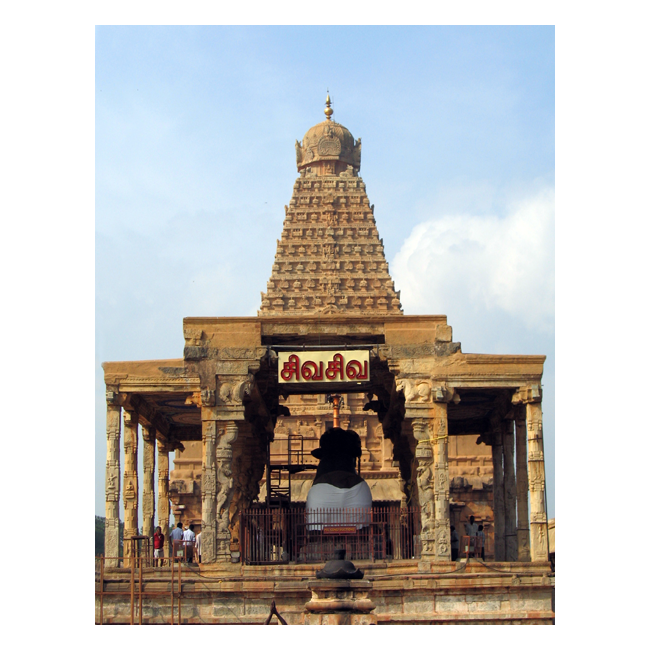 The site was inscribed on the World Heritage List in 1987.

The Chola Dynasty, one of the longest ruling dynasties that ruled south India [9th to 13 century], is remembered for building temples with remarkable architecture among other things. Out of the many temples built during their rule, three of them stand out and today are known as the Great Living Chola Temples.

The Great Living Chola Temples – UNESCO World Heritage Site – are temples built during the Chola rule in the south of India and neighboring islands. These sites includes 3 temples of 11th and 12th century. These 3 temples are:
– Brihadeeswarar Temple in Thanjavur / Built by Rajaraja I, completed 1010.
– Brihadeeswarar Temple at Gangaikonda Cholapuram / Built by Rajendra Chola I, completed 1035.
– Airavatesvara Temple at Darasuram / Built by Rajaraja Chola II, in the 12th century CE.

Being staunch devotees of Lord Shiva, the Chola temples are dedicated to their favorite deity. The Chola rules carried forward the Dravidian architecture of temple-building set by the Pallavas but took their design to the next level. They used granite for the construction of sculptures of warriors, kings, dancers, deities and more. The temples they built were huge, standing tall to depict their glory.

Chola style temples consist almost invariably of the three following parts, arranged in differing manners:
– Porches or Mantapas, which always cover and precede the door leading to the cell.
– Gate-pyramids, Gopuras, which are the principal features in the quadrangular enclosures that surround the more notable temples. Gopuras are very common in dravidian temples.
– Pillared halls (Chaultris or Chawadis) are the invariable accompaniments of these temples. 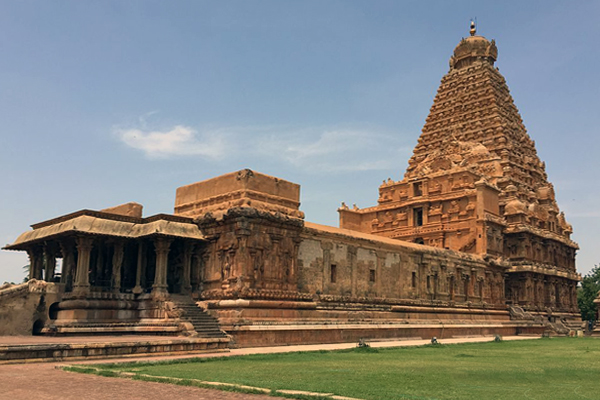 The temple is dedicated to Lord Shiva.
Known in the inscriptions as Dakshina Meru, the construction of this temple was inaugurated by the Chola King, Rajaraja I [985-1012 CE] possibly in 1003-1004 CE, and consecrated by his own hands in 1010 CE.
A  main entrance with gopura and massive colonnaded prakara with sub-shrines encompasses the massive temple.
The sanctum itself occupies the center of the rear half of the rectangular court.
The temple tower is called Vimana is about 216 ft high and is among the tallest of its kind in the world.  It is surmounted by an octagonal sikhara – Kumbam – which weighs around 80 tons.
The Vimana is so designed that it does not cast a shadow at noon during any part of the year.
The temple walls are embellished with expansive and exquisite mural paintings.
Eighty-one of the one hundred and eight karanas, posed in Baharatanatya, are carved on the walls of second bhumi around the garbhagriha.
There is a shrine dedicated to Amman dating to 13th century.
A giant Nandi which was carved out of a single stone, measuring 16 feet long and 13 feet high adorns the entrance.

It is the first complete granite temple in the world. Granite is not found in the surrounding areas. It is not known where this massive granite was brought from. The absence of a granite quarry within a 100km radius of the temple require logistics of epic proportions to get the stone to the construction site. As hard as it was to find, Granite is harder to carve. Yet the great Chola wanted a the temple to be covered with the most intricately designs; unlike the pyramid which possesses extraordinary dimensions but nary an artistry. 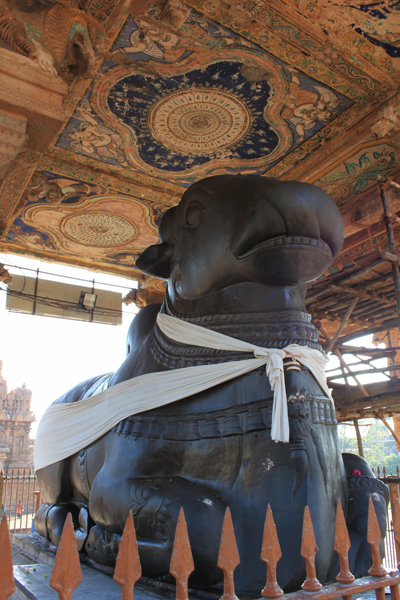 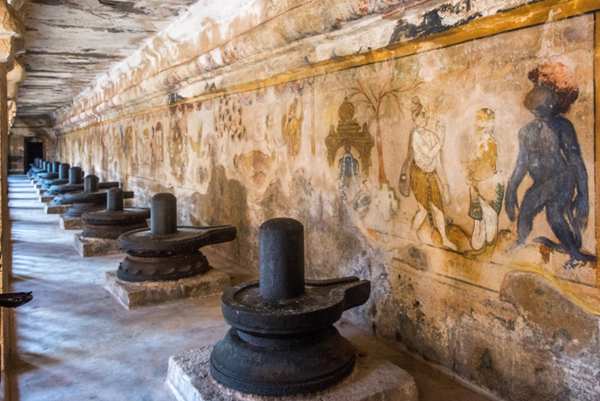 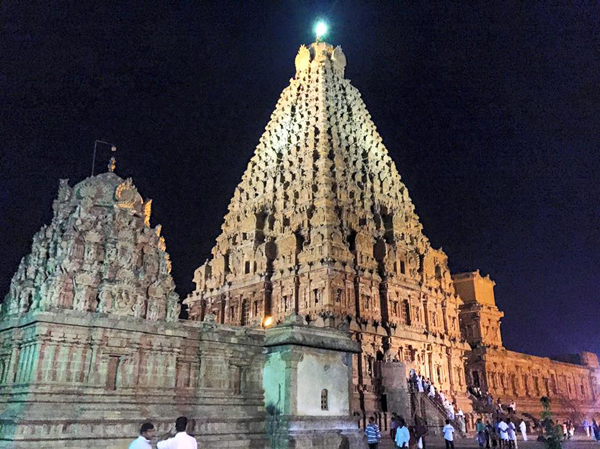 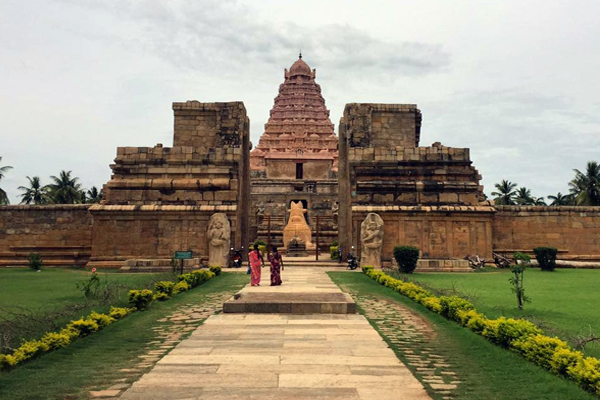 The Great Temple of Gangaikonda Cholapuram

This was completed in 1035 by Rajendra Chola I (1014-44 CE), the son of the famous Chola king Raja Raja Chola I, who built the Brihadeeswarar Temple at Thanjavur. Rajendra wanted to emulate the temple built by his father after his victory in the Ganges over the Pala Dynasty. He assumed the name of Gangaikonda Cholan, meaning the one who conquered the Ganges. It is believed that Rajendra redirected all the endowments of the Brihadeeswar temple at Thanjavur to this temple. Rajendra is believed to have involved the same craftsmen used by his father and transferred them from Thanjavur.
The temple is an architectural as well as engineering marvel because the shadow of main tower never falls on the ground throughout the year.
The vimanam (temple tower) is 180 ft high, which is 9.8 ft smaller than the Thanjavur temple.
Compared to the Thanjavur temple, which has straight contours, this temple has concave contours, divided into eight zone
The presiding deity, Brihadeeswarar, in the form of Lingam is housed in the central shrine. It is 13 ft tall and is the largest for any Shiva temple. So, this temple has a larger Siva linga than the one at Thanjavur, but the Vimana of this temple is smaller in height than the Thanjavur vimana.
The sanctum measures 100 sq ft and is approached through columned Mukhamandapa (prayer hall) and an Ardhamandapa (hall of sacrifice).
There are many bronze statues in the temple depicting Chola art of the 11 century, with the one of Subramanya being the most recognised. 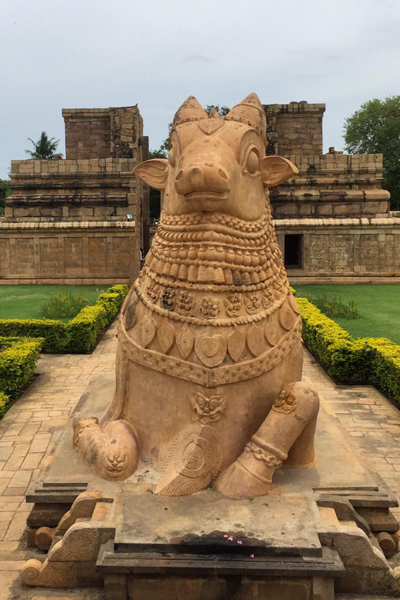 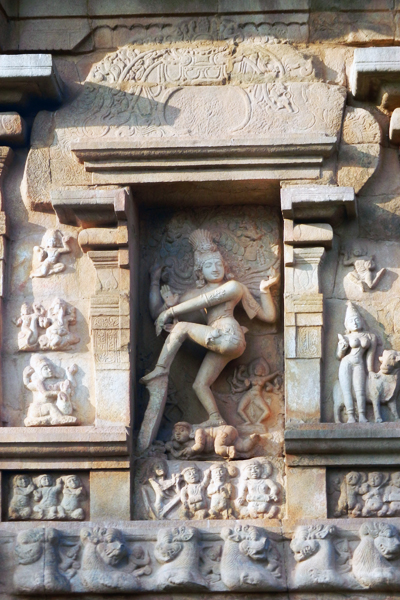 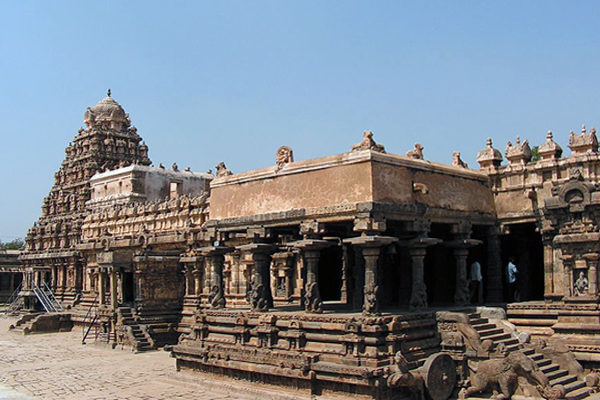 The Airavatesvara temple at darasuram was built by the Chola king Rajaraja II in the 12th century.
It is much smaller in size as compared to the Brihadisvara temple at Tanjavur and Gangaikondacholapuram.
It differs from themin itshighly ornate execution.
The temple consists of a sanctum without a circumambulatory path and axial mandapas.
The front mandapa known in the inscriptions as Rajagambhiran tirumandapam, is unique as it was conceptualized as a chariot with wheels. The pillars of this mandapa are highly ornate.
A number of sculptures from this temple are the masterpieces of Chola art. he labelled miniature friezes extolling the events that happened to the 63 nayanmars (Saiva saints) are noteworthy and reflect the deep roots of Saivism in this region. The construction of a separate temple for Devi, slightly later than the main temple, indicates the emergence of the Amman shrine as an essential component of the South Indian temple complex. 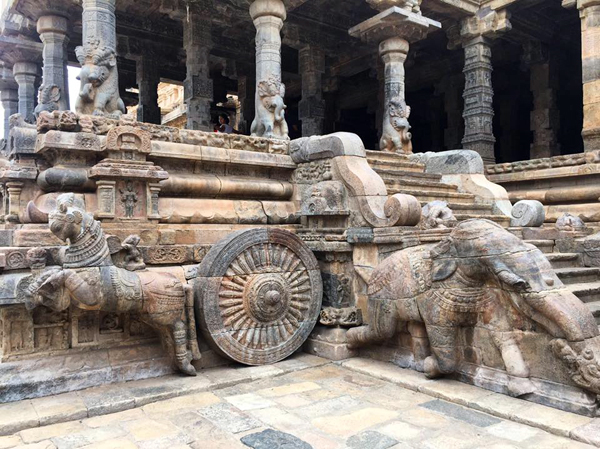 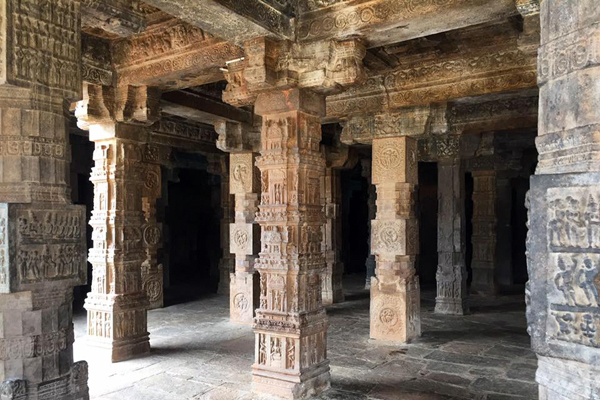 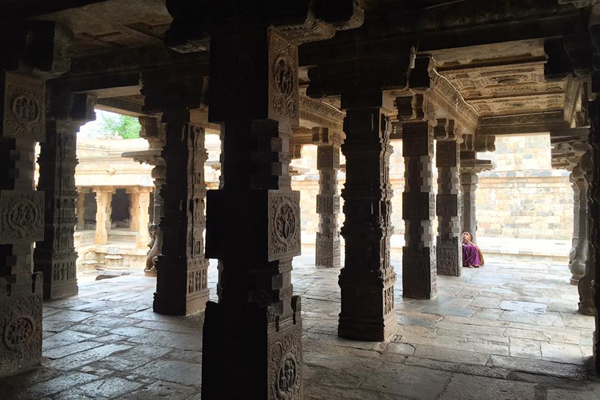 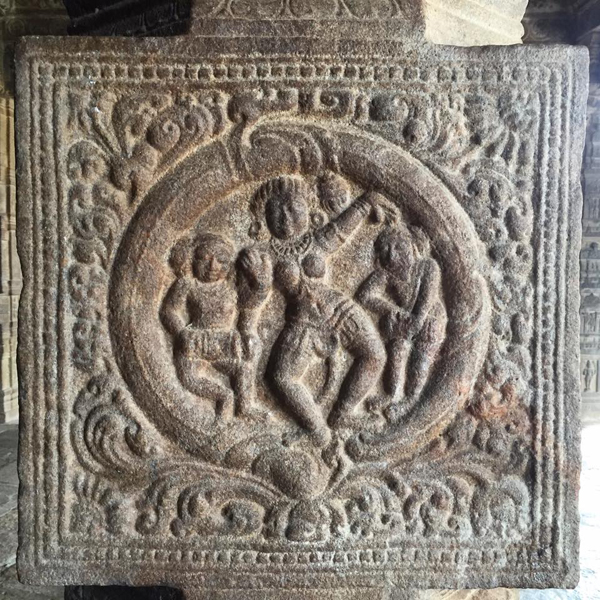 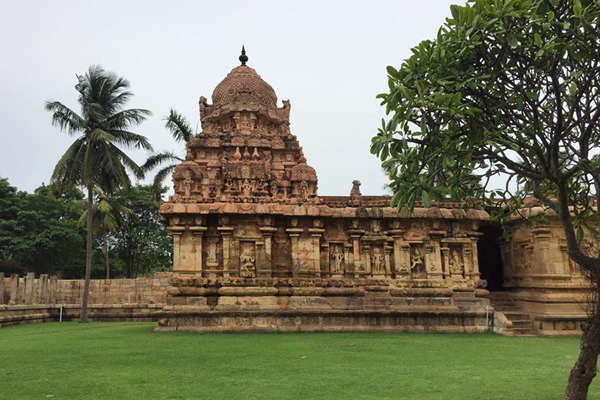